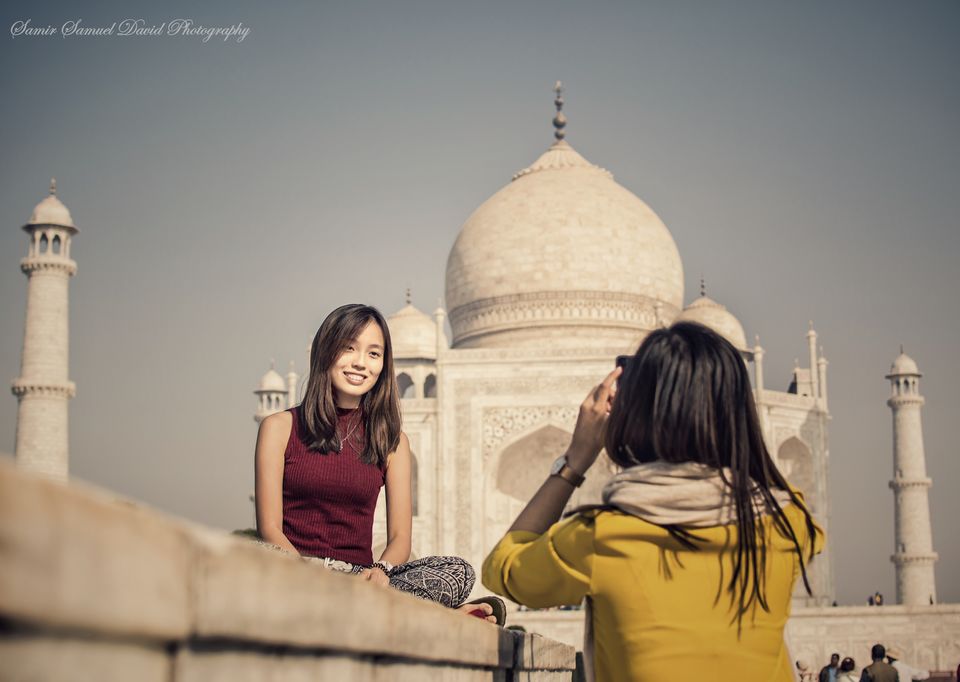 The Enigmatic Taj Mahal (Read my blog in the photo link) 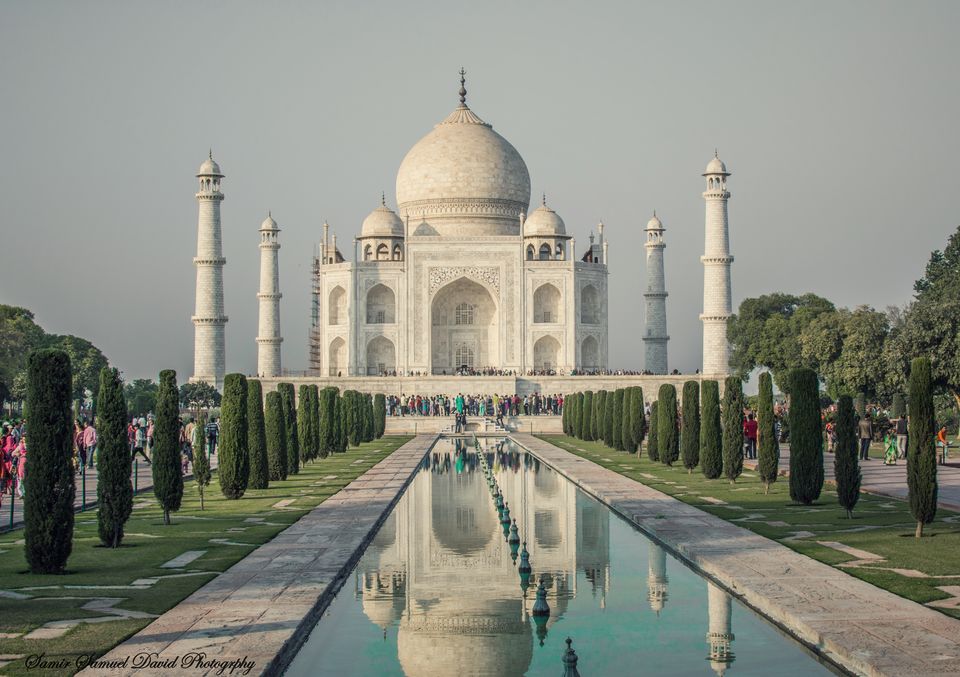 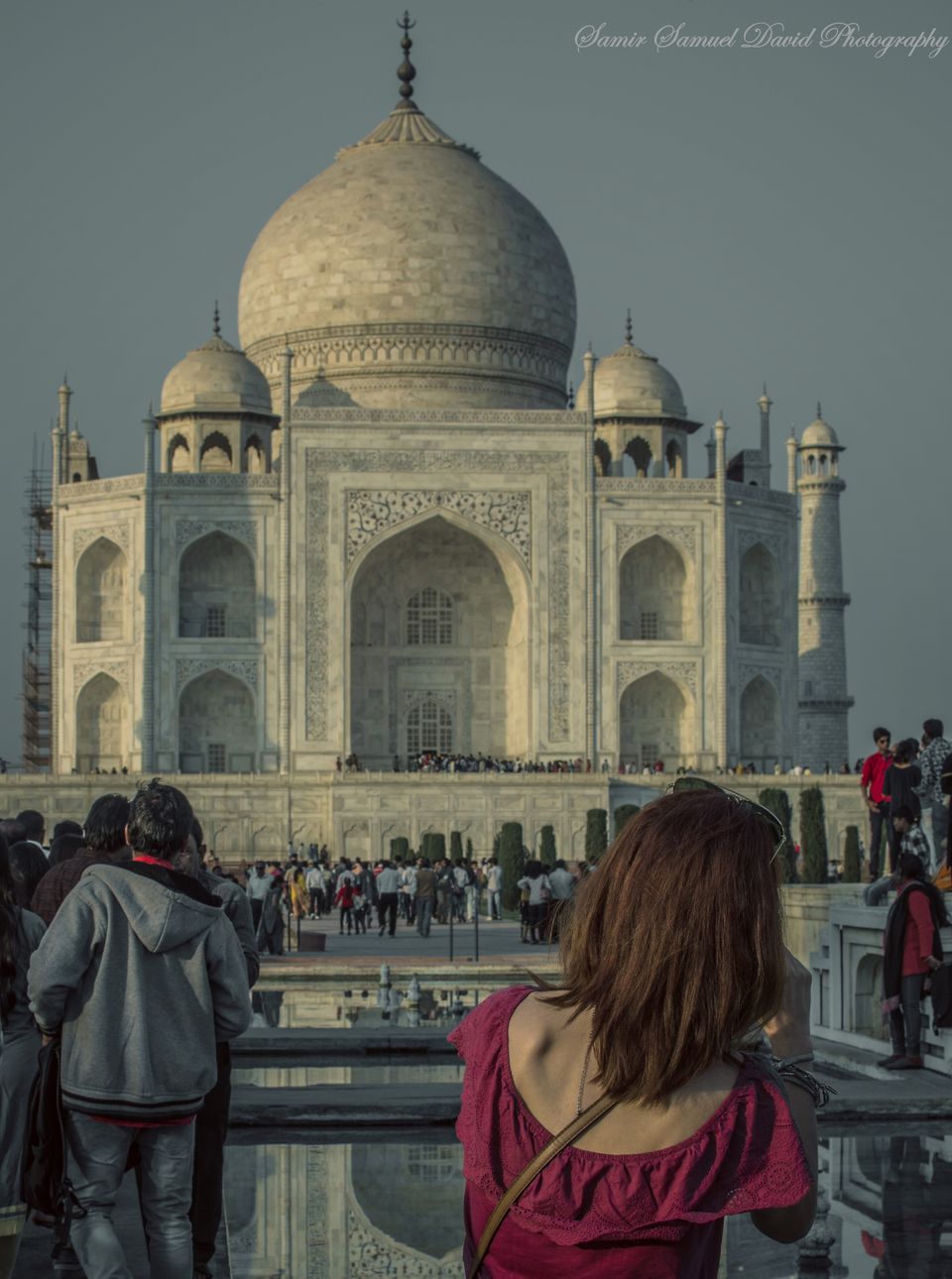 The Gigantic Taj Mahal (Read my blog in the photo link) 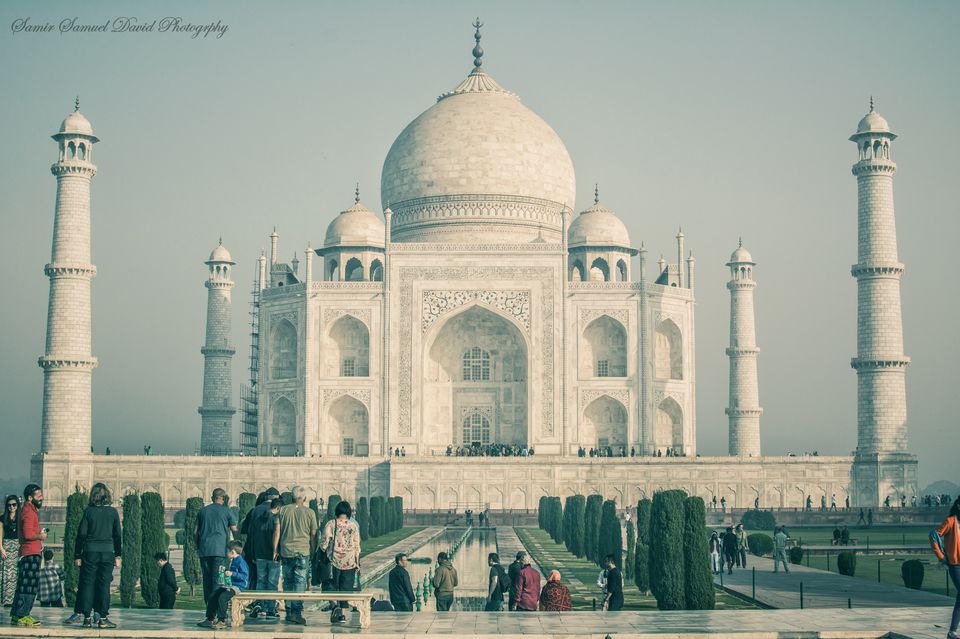 This is the most awaited moment for everyone, to be clicked in front of the Taj Mahal (Read my blog in the photo link) 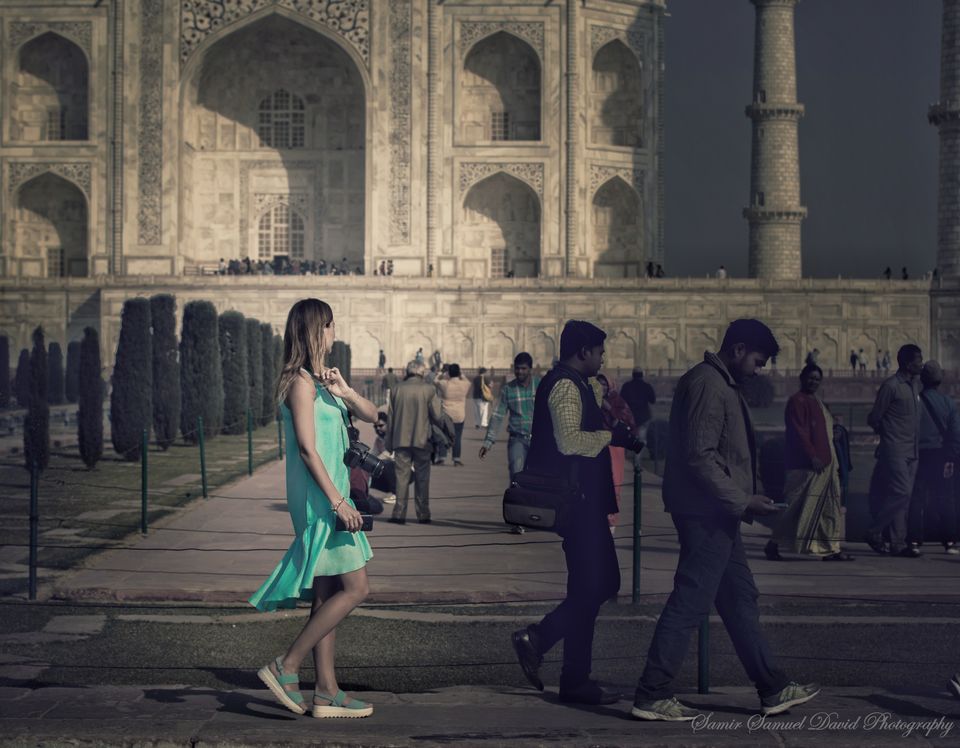 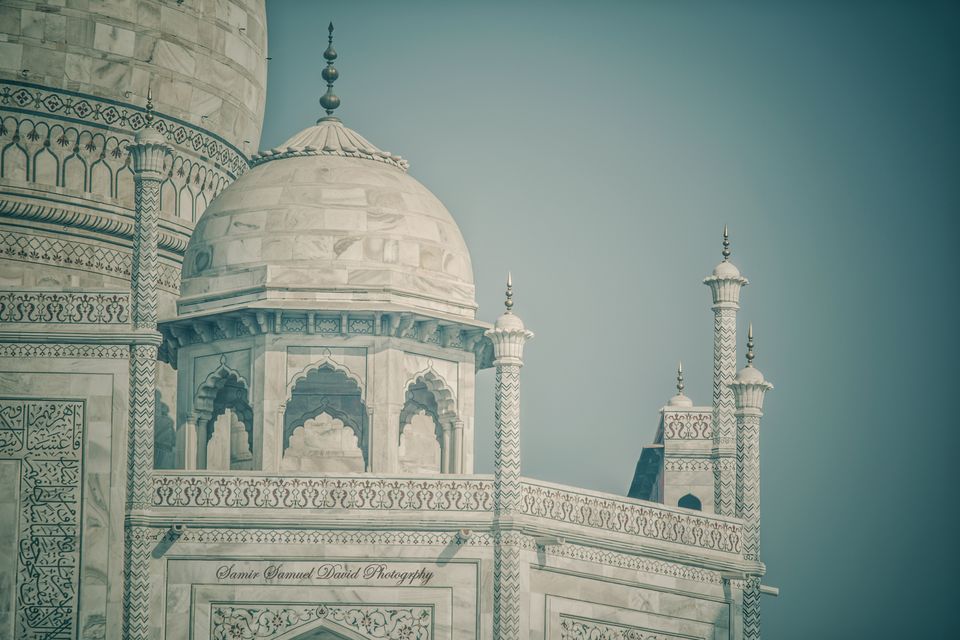 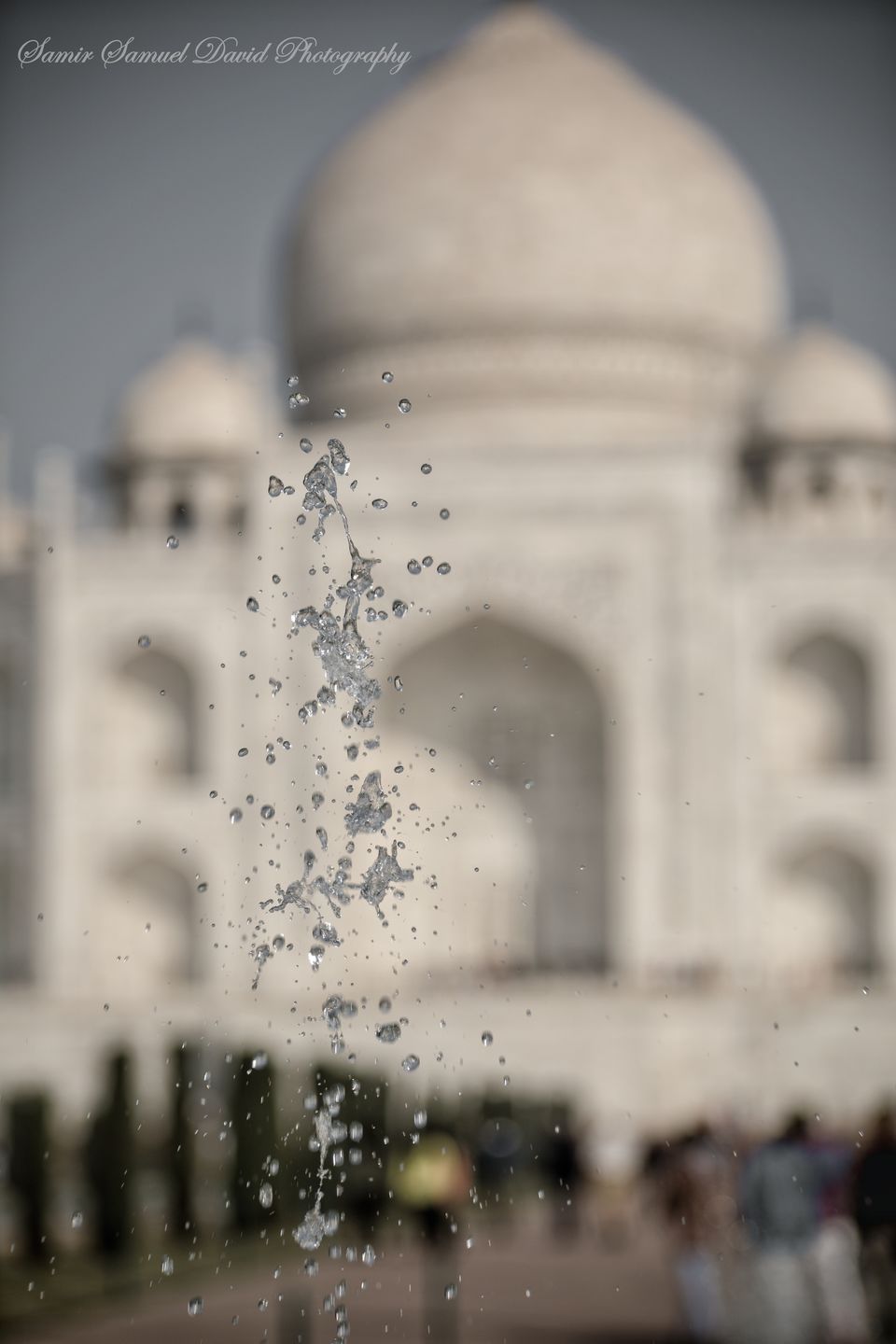 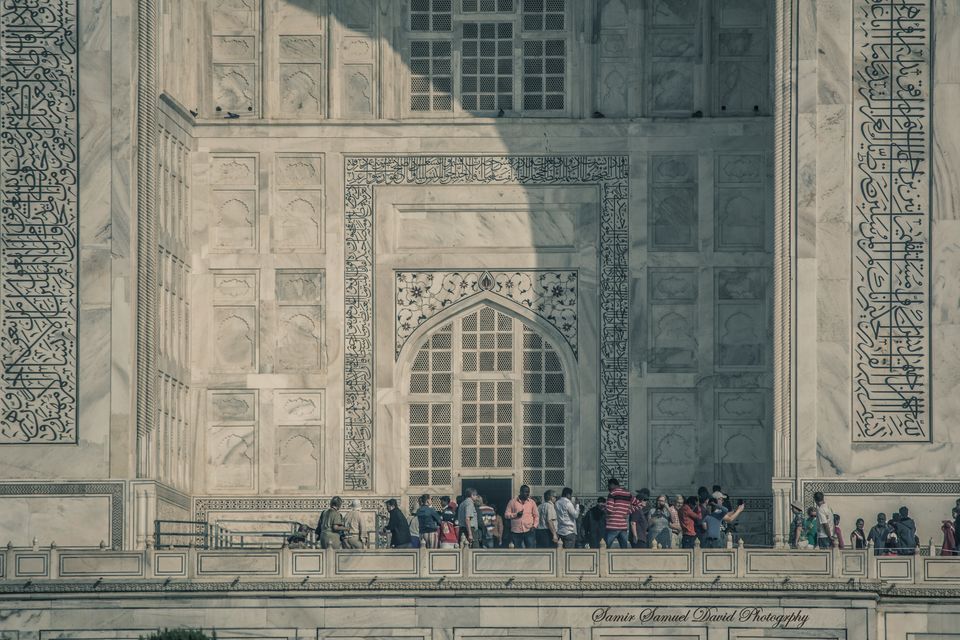 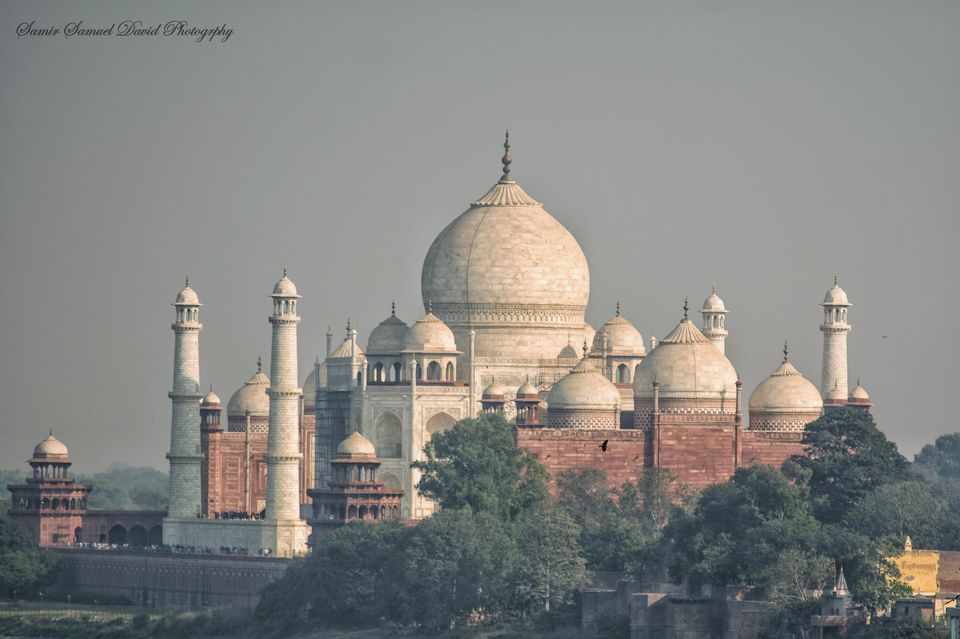 The mesmerizing Taj Mahal (Read my blog in the photo link) 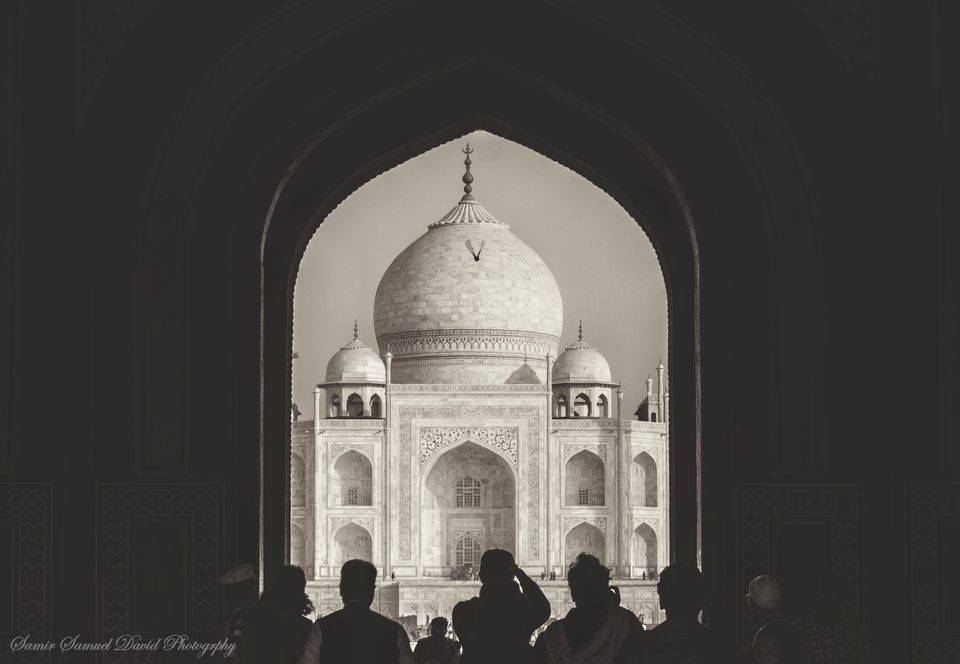 Wah Taj!! (Read my blog in the photo link) 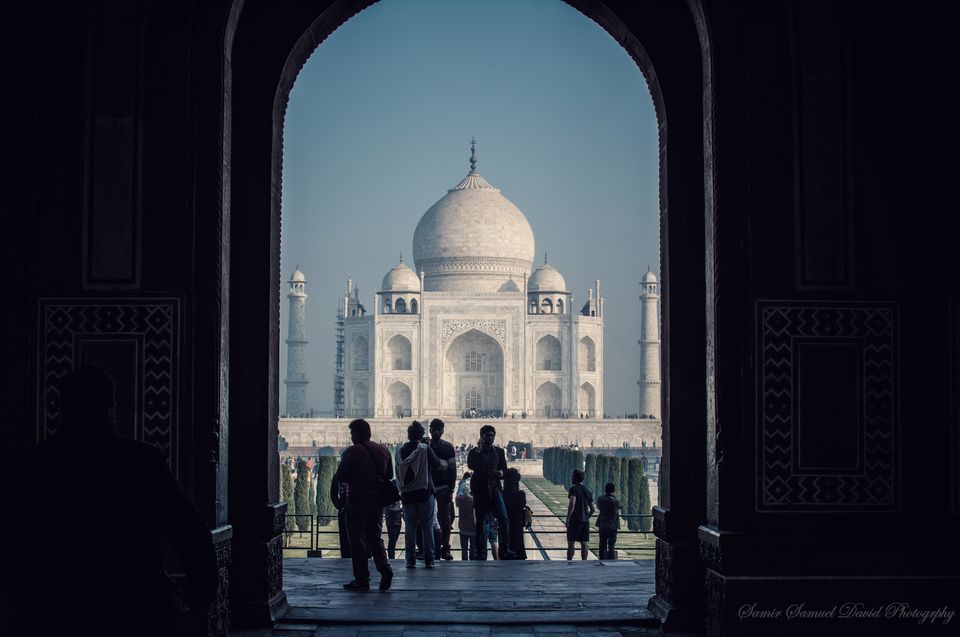 Being a photographer, I always had this wish to capture the beauty of the Taj Mahal. Though I visited this majestic place in 2002 but that was years back and from then till now, I've grown in a wider perspective.

The first thing that I did was, I booked a hotel, Optimum Tara palace which is just 800 meters from the Eastern Gate of Taj Mahal. It wasn't very expensive, yet not very budgeted. The journey from Udaipur Railway station to the Agra Cant Railway Station began and I got there sometime in the afternoon.

I settled down in the hotel and visited the Taj Mahal in the evening. It was huge and it was magical. The aura and the substance of the entire place and its vicinity was special, spacious and royal. It gave the feel of a well planned establishment.

Tourists from all over the world were rushing to this beautiful monument of love and devotion. The craftsmanship by the Mughal artists was something that caught my attention. I wondered for how come the people of that era must have erected such a beautiful and gigantic structure in the absence of technology and modern equipment.

I wrapped up for the day. Had dinner at some restaurant outside Taj Mahal and went back to the hotel for a good night sleep. I was all charged and excited in the morning to visit the Taj Mahal again.

I am an author of A Book of Brainless Thought, which was felicitated and appreciated by the Princess of Mewar (Udaipur, Rajasthan), Bhargavi Kumari Mewar. I always wanted to have a photograph of mine with the book in front of the Taj Mahal. I took the book along with me.

As I entered the security check, they told me that I could not carry the book inside due to security reasons. Rather it is not allowed to carry any documents inside Taj Mahal premises. I was completely heart broken, as my wish couldn't meet its end. I then entered the Taj Mahal from the Eastern Gate.

People from all over the world were rushing into the Taj Mahal premises to see its wondrous beauty. Seeing the Taj Mahal, I felt so proud and lucky to be an Indian. It was huge and beautiful. I couldn't get my eyes off it. The narrow column of water pond in front of Taj Mahal with tress and small garden alongside was a treat to the eyes.

The design of Taj Mahal was inspired by Mughal and Persian Architecture. It has excellent carvings and decorative elements of calligraphy. The calligraphy on the center 'Great Gate' reads -

"O Soul, thou art at rest. Return to the Lord at peace with Him, and He at peace with you." I bet, that even in the present, it is not possible to replicate a Taj Mahal.

I then moved ahead to visit the tomb and the graves of the the emperor, Shah Jahan and his beloved wife Mumtaz Mahal. I was to enter inside the tomb and so I was instructed to wear certain shoe wraps, which costed me Rs. 10. I then bought ticket for a normal entry, which costed me Rs. 40. I did not click a single photograph inside the tomb and it was restricted for photography, but people were madly clicking pictures with flash with their smart phones, which I found to be an insult for the two souls.

This was among one of the most beautiful experiences that I had in my life. I then got back to the hotel and planned for a visit to the Agra Red Fort. Taj Mahal is indeed among the most beautiful wonders of the world and I'm glad that I saw it. 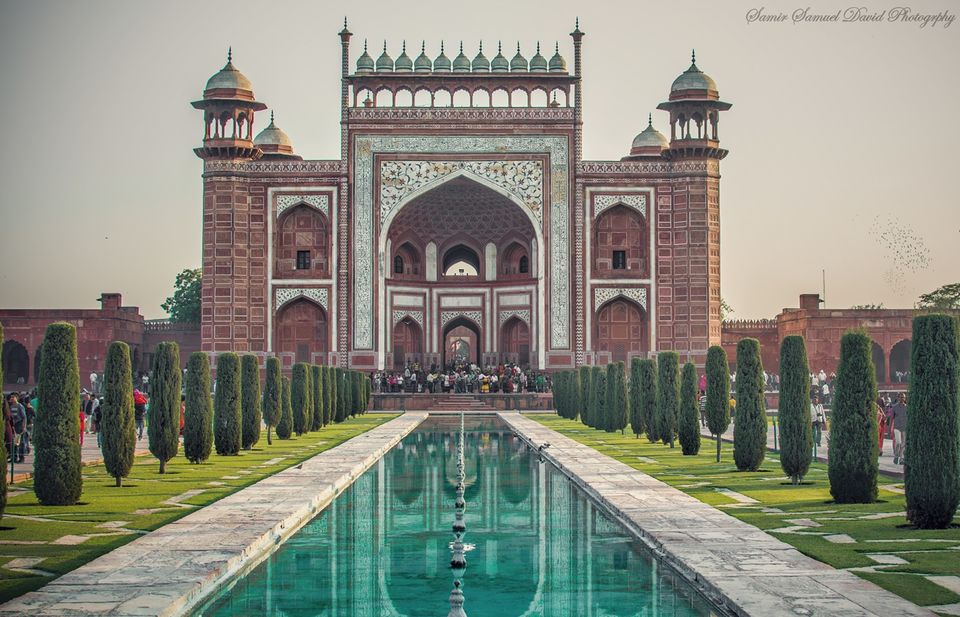 I am glad that I got a few of my photographs clicked in from of the magical Taj Mahal. 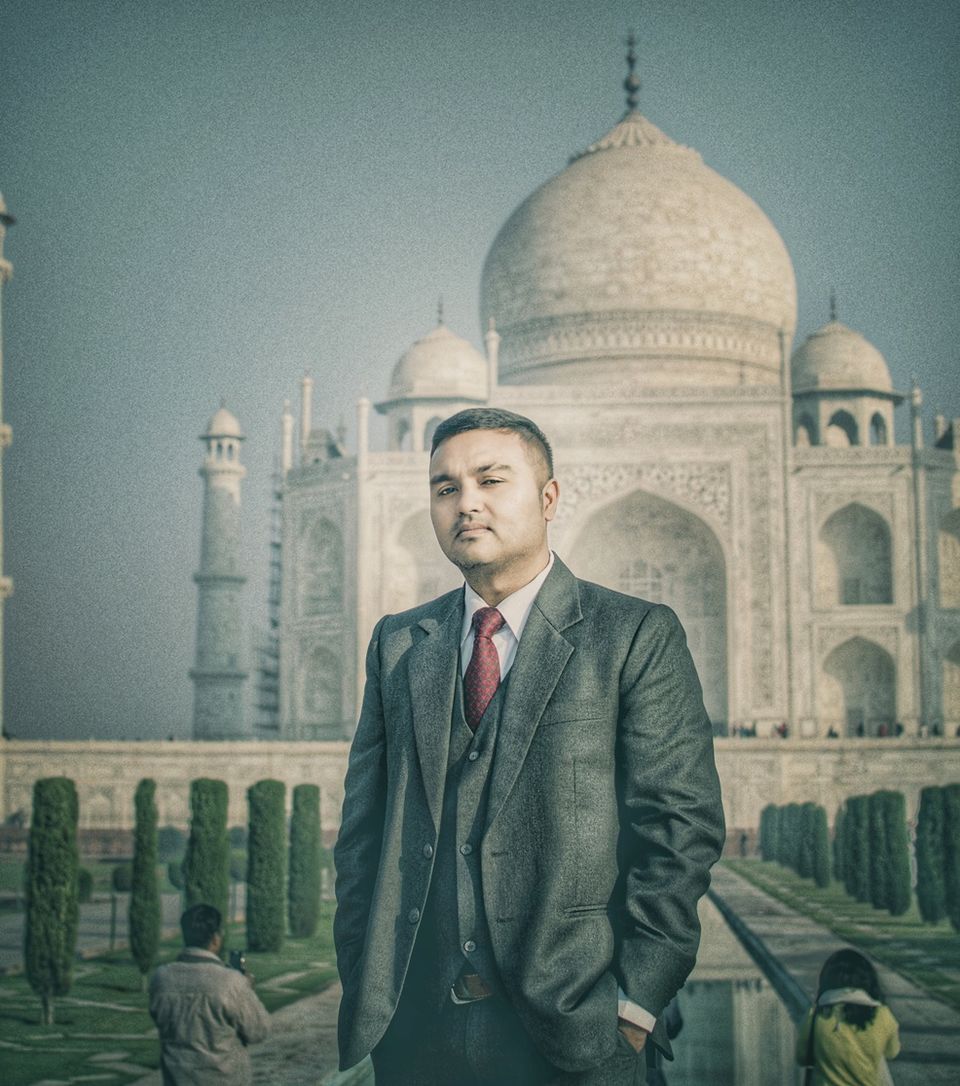 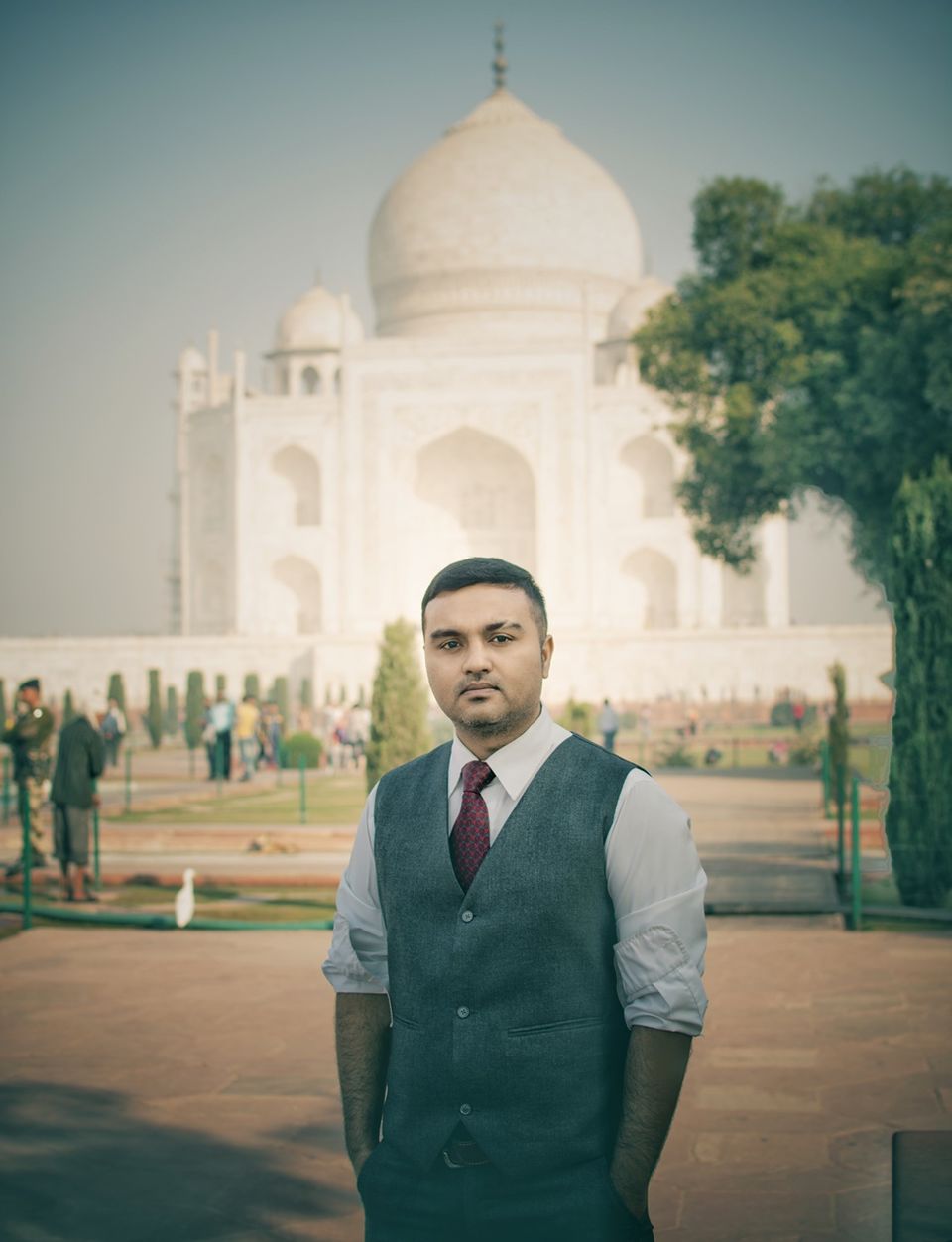 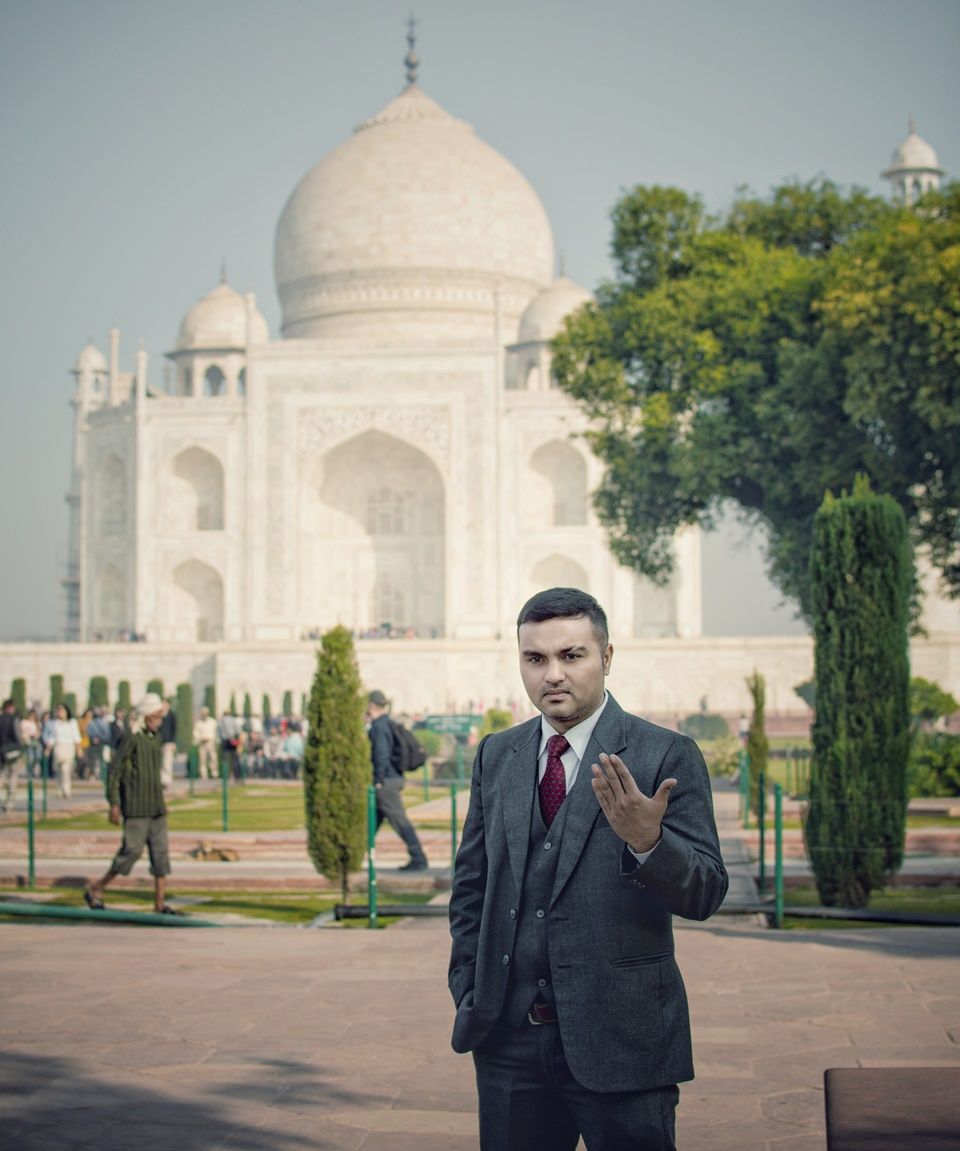