In Search of calmness 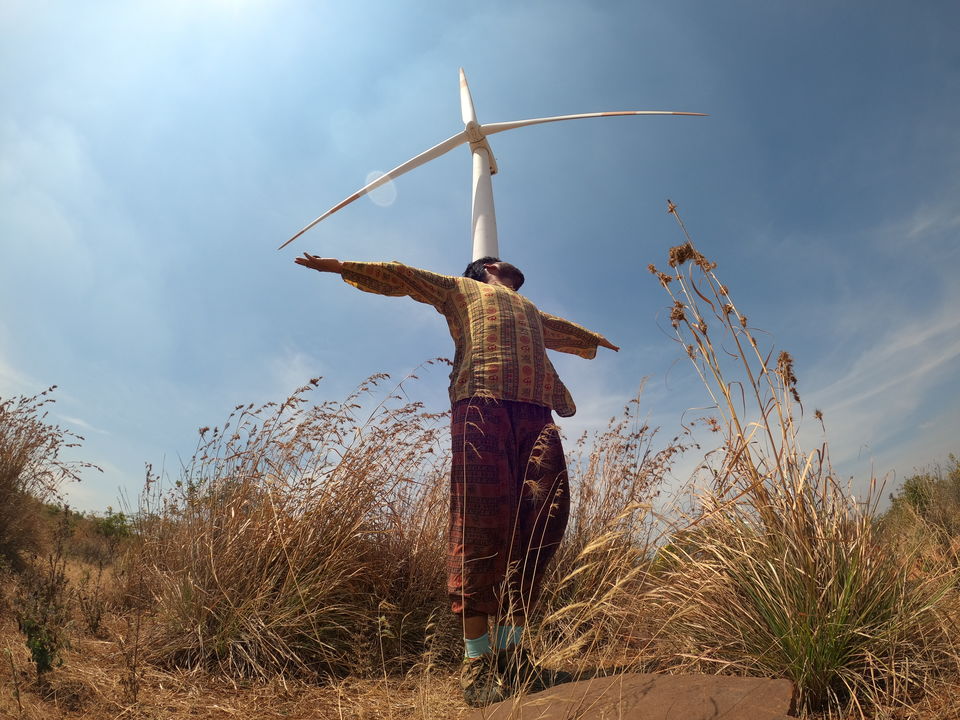 Myself and my friend Sai had been planning a bike trip for a long time. We started looking places around 400 km from Hyderabad but the place was undecided.

Our journey date was decided on 21st Feb. Destination not being decided till the date of journey we decided to go Andra Pradesh and explore.

Our packing all done by 12 am. We decided to start our journey at 3 am in the morning. The urge to hits the roads was so much that we didn't get sleep, we took cold shower and started jour journey at 1 am. It took almost an hour to get of the city and reach highway. We then covered 100 kms and topped for much a needed tea & smoke break. We ride another 80 kms and stopped at 3 am. It was chilling cold so we had to put raincoat for wind protection.

By 6 am we reached a village near Mallapur, there we had our breakfast. After 30 minutes started for Srisalilam. As we approached Srisailam, the view was getting better and better. The roads were beautiful with dry forest on both side. We took an unplanned left turn and followed a way leading into the forest. We reached a beautiful spot and decided to camp and rest for sometime. We made tea burning forest woods and out of expectation the tea was amazing and gave us some energy. Then we took a nap for 2 hours before we start for Nallamala forest (decided to be the destination to camp for the night).

As we were crossing Srisailam hills, we came a cross some amazing views and curved roads. It was treat for our eyes. Roads were curvy at few points with hair-pin bents. We stopped at Dornala to carry our supplies. We then came across a lake. We spent sometime there. It was a beautiful sight. We thought of putting our tent but it was too muddy to take our bikes. We then headed towards Nallamala forest to camp for the night. We had a slighlest idea that the road would be so full of traffic & bad. It was getting dark. Crossing big buses on that small bad road was dangerous & challenging task. After riding for 70 kms we reached a resort(Nallamal Jump Camp) and thought of putting our tent nearby. Unfortunaley, the receptionist there refused to agree. It was 7:30 pm and it very getting hard for us to settle for the night. Having no option left we then decided to go Atmakur, the nearest village, 30 kms away. On our way, we bumped into a hotel where we had authentic Andra meal. It was delicious! Some locals suggested there was a park 8 kms away, where we could camp. After dinner we headed in search of that park. We reached the destination at 9:30 and found gates were closed. We were in serious trouble at that time. Fortunately, Sai found a road beside the park going into the forest. It was pitch dark and scary. We entered few distance into the forest, found a spot and decided to camp. What we found after was truly bliss! The sound of the wind and the sky full of stars. Just wow! We chatted for two hours sharing our travel experiences. Day well spent. 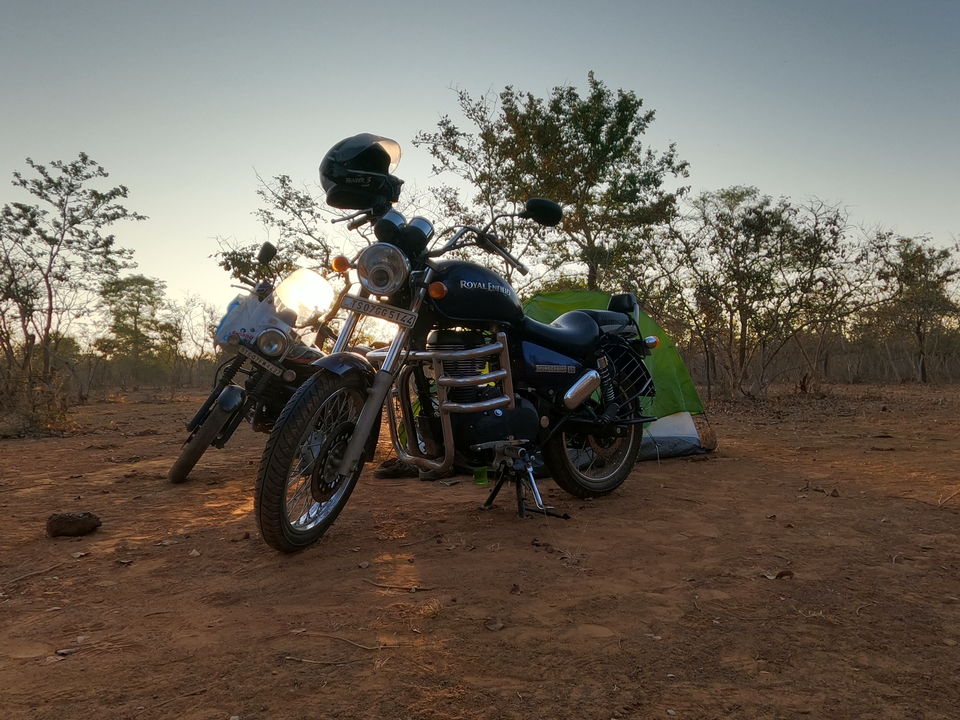 The next morning a villager came at our camping spot and started asking questions. Sai was speaking with him in Telegu, telling him how we landed there.

He told it was a not a good decision to camp there since the area was wild animal prone zone & part of Tiger Reserve. Heart pounded for a moment!

We then headed to the nearest village to have breakfast. The road crossed through forest, it was beautiful ride. For breakfast, I had Uggani there for the first time. Uggani is local dish famous in Rayalseema district.

Then we headed to a reservoir nearby. It was massive. We planned to settle down at the bank and chill for sometime. We couldn't resit but to take bath.

With soft music on, sunbathing and enjoying the view was one of the best moment of the trip. We then headed to the nearest village for lunch. The local meal was delicious. Especially, the hospitality of the people serving us touched our heart. They had a smiling face & they kept on asking us if we need anything else.

Our stomach was full but the hunger to travel was still there. We were not ready to go home & travel some more. So we decided our next destination to be Gandikota, 160 kms from there. Without any futher thought we started towards Gandikota.

Sunset at Gandikota was a must watch so we had to reach before sunset anyhow. The road was pretty smooth, mostly highway so we could easily maintain avg speed of 75 km/hr. We reached Gandikota by 5 pm, found a beautiful spot somewhere on huge rocks and enjoyed the sunset. We were so lost in chilling that we lost track of time and it was risky task to return at dark through the huge rocks. We had dinner at a local hotel. The hotel was run by a family. A little child of the family named Sugandhika(fragrance) was attracted us with her innocence. We were hungry & we enjoyed rice & pappu to the fullest. Then we headed in search of place to camp for the night. First we reached Camping spot for tourists, the rush was too much there. We were looking a calm place, away from humans.

It was 9 pm at night and the surrounding places were pitch dark. Gandikota is a place which stays windy all throughout the year. Night ride was a hell of an experience. We went a little off-road to a route explore the place at night. It was a forest with a small lane, it was damn scary at times. Our mind was screaming, go back but heart was whispering, let's explore a little more. What we then experienced was out of the world! There was a huge windmill in front. The blades were making sound gushing the winds. Looking at this huge thing with stars at background was an amazing view.

After rejecting few places, we finally camped at an open ground. It was so windy that it took more than 30 minutes for us to set-up the tent. We then saw two men on a bike approaching us, we were a bit tensed. Guess what? They were police, they were paroling. Fingers were crossed, there should not be any problem now. It was already 11:00 pm and we just found a spot to camp after a long time. Fortunately, they were convinced after Sai spoke to them in Telegu. Rest of the night was spent well.

Our camping spot at the end of day 2 at Gandikota 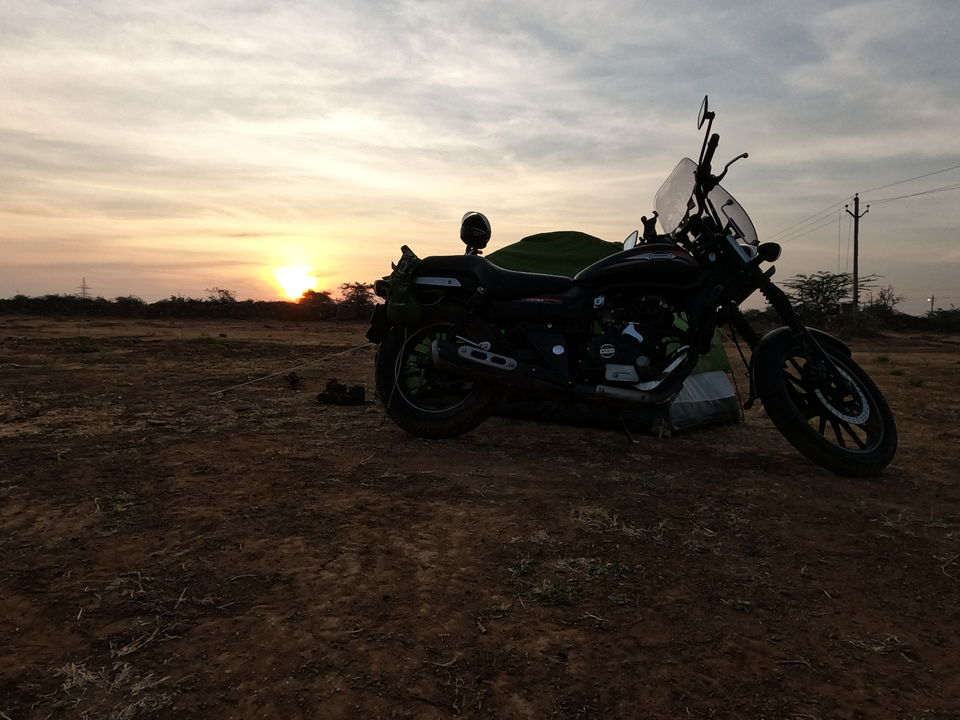 It was a lazy day. Sai got up first to take some go pro shots. After breakfast, we headed to Gandikota public camping spot. The place was empty during day. We sat and enjoyed the view for sometime. We huge water-body can be seen from this place. Then we headed to find a camping spot for that day. After exploring nearby places for next 3 hours, we found a perfect place to camp. We then returned back to have our lunch, packed our dinner, took all supplies, and we were all for the rest of the day. By 4 pm we had setup our tent. The spot was full of rocks so we had to do some work to cleanup the place before putting up the tent and bring our bikes to the spot. The sky was all red during sunset. Before dark we collected woods to setup fire at night. The night was just perfect with stars above, wind, joint, soft music, camp-fire. We made tea with bon-fire to spark up our experience. It was best camping experience I had so far, can'y just be explained in words. 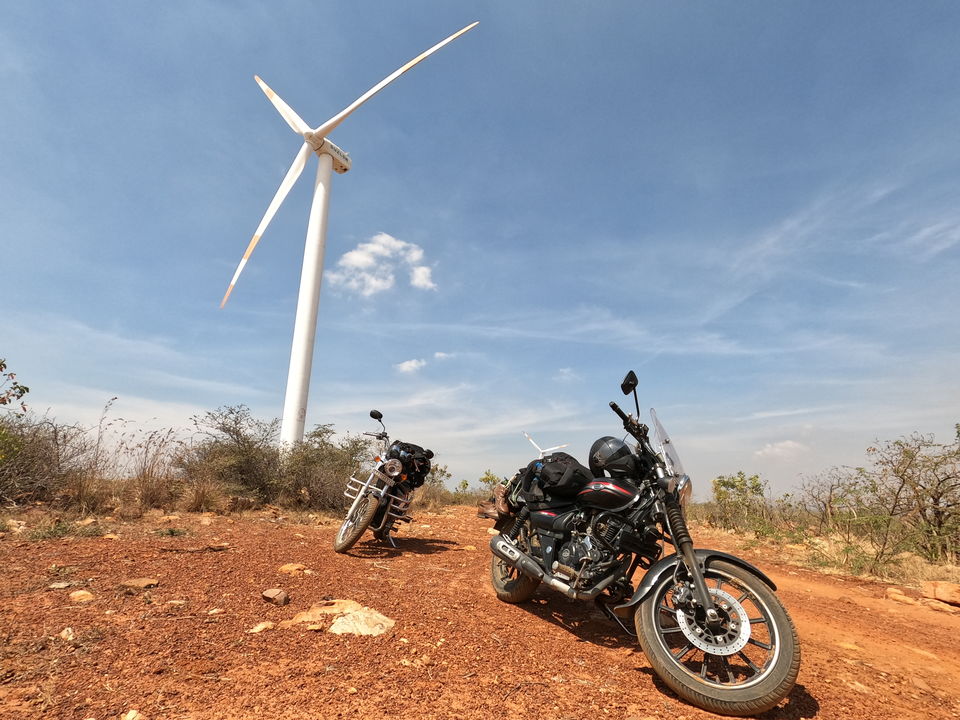 Our camping spot for day 3 at Gandikota windmill farm 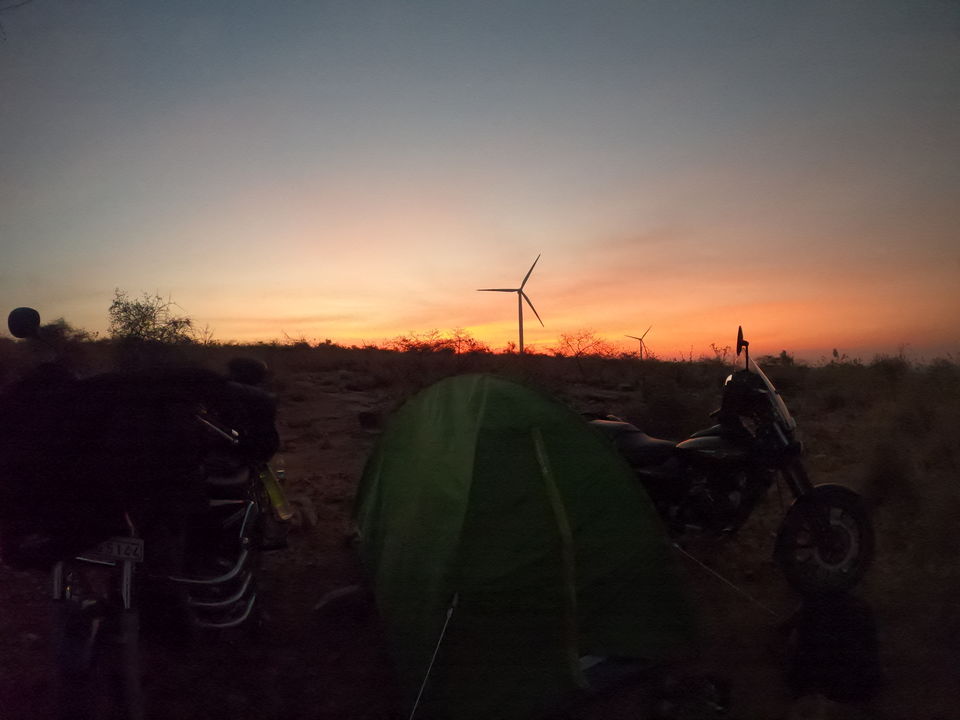 We enjoyed sunrise, packed our stuff & ready to head home. We started from Gandikota at 8 am and reached Hyderabad by 7 pm.

Over all, the trip was full of adventure. It was more exciting since our destination was not decided, we visited random places and spent our time with peace. There was nobody to rush. We took things at our own ease. I think that is best part about travelling. When we give ourselves all the time to look beyond our daily routine.

Route of our journey 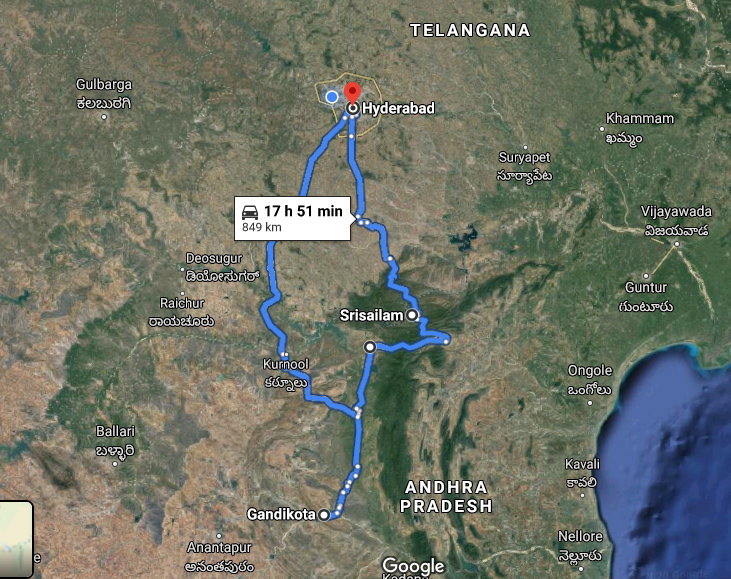