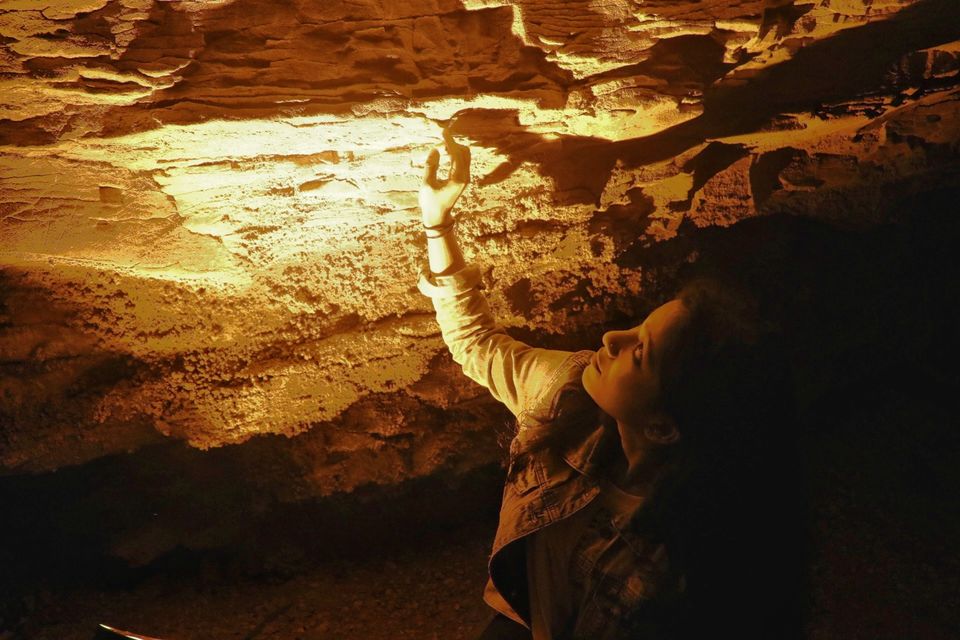 Mammoth cave, a UNESCO World Heritage Site, is the world’s longest cave system with more than 400 miles of surveyed passageways (estimates that around 600 miles are unexplored). This is a subterranean world of immense rooms, long canyons, and tight passageways and that is the reason it is called a “grand, gloomy, and peculiar place”

The history of the cave goes back to over 10,000 years. Cave exploration dates back to 4000 years and the artifacts they left - like cane reed torches which they used to light the pathway are preserved in drier passageways.

Throughout the spelunking, rangers explain the geology and history of the cave. The cave through which we walk was once a river. It flowed through this passageways until an easier path led it into the depths below. Another peculiarity of the place is that it maintains a 12-degree Celsius temperature round the year. The air conditioning is maintained deep below the ground level.

In order to explore Mammoth Cave, you must join a tour. More than a dozen number of tours are available at different time slots. In a tour, you travel with a tightly packed group so that the rangers can keep an eye on you and protect the fragile ecosystems in the cave which holds one of the world’s most diverse cave ecosystem with about 130 forms of life. Moreover, the cave system is so vast as without a ranger, we’d be lost there forever.

I joined the Grand avenue tour and the Violet city lantern tour which covered almost 7 miles of the cave.

This is longest standard tour at Mammoth Cave. A four-hour underground hike for around 4 miles. During this tour, we walk through Cleaveland Avenue, Boone Avenue, and Kentucky Avenue, and a high point in the cave referred to as Mt. McKinley. This tour ends with a visit to Frozen Niagara and the Drapery Room.

We go deep into the cave and it feels so surreal. It is hard to tell just how far below the surface we are, or even if we are going up or down. We can see stalactites and stalagmites here, but they are not the main attraction. Mammoth Cave is long series of subterranean rooms and passageways. Some rooms are enormous with 50 ft height and walls of gypsum flowers. Some passageways are just large enough for a small person to squeeze through. Some places of the cave resemble the slot canyons of Arizona.

Even though the trail was electrified, it was dim light to protect the ecosystem of the cave. Flash photography wasn’t allowed and thus the photos are of poor quality.

There are benches constructed inside the cave 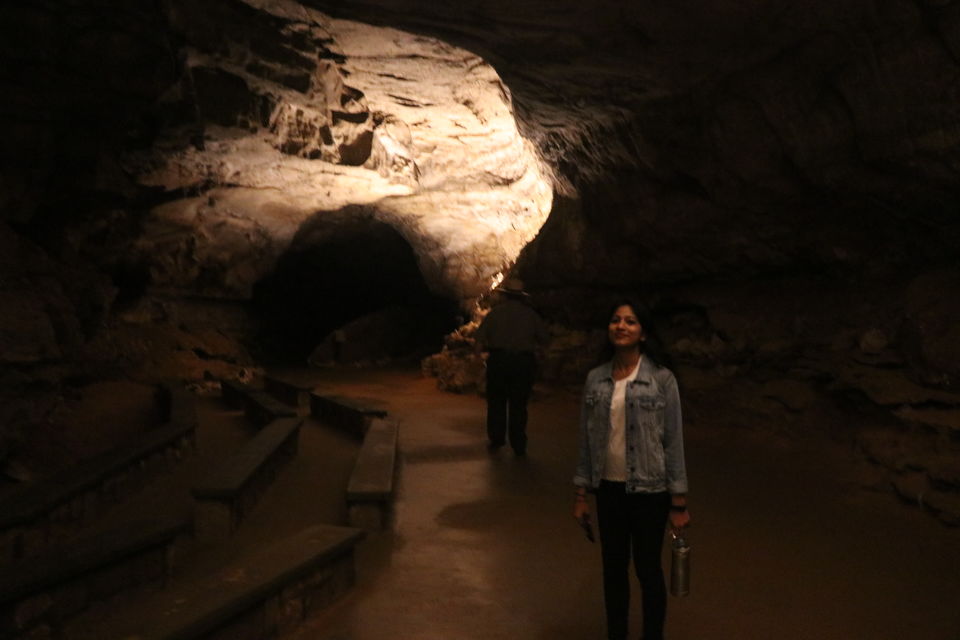 Path once the river flowed 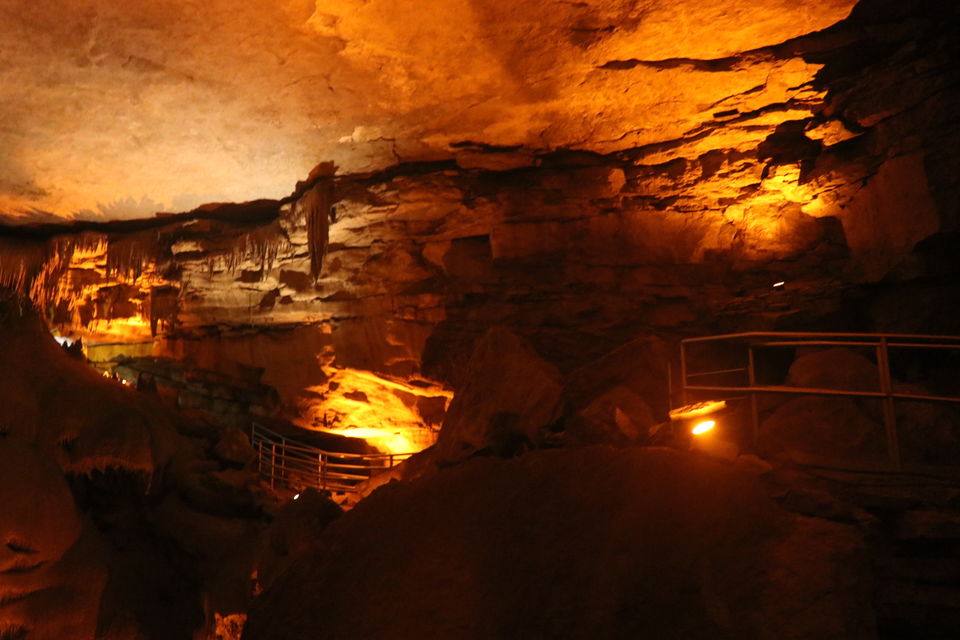 The Frozen Niagara portion of the cave 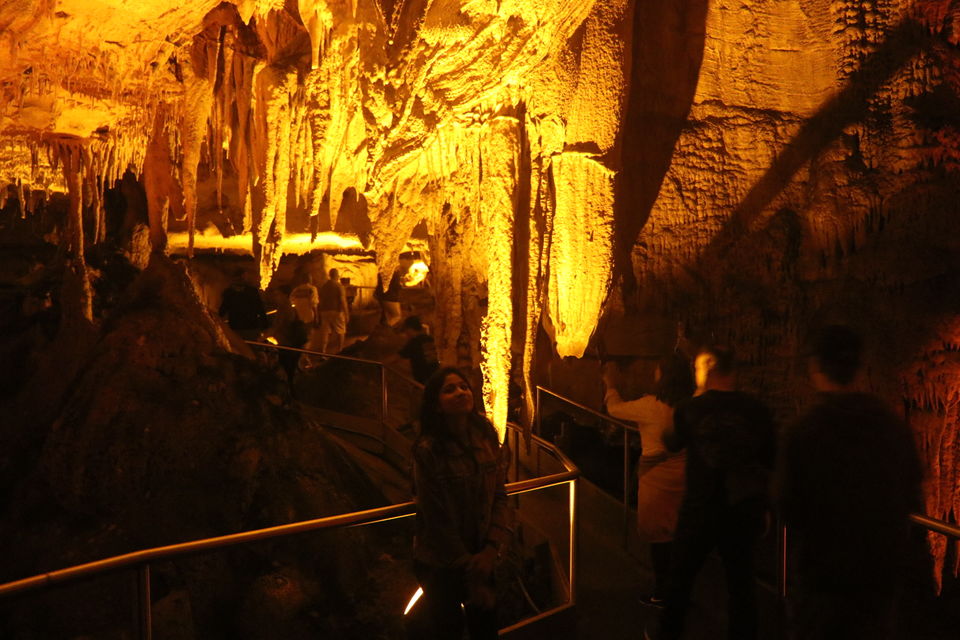 The cave is huge

This is a 3-hour tour which we walk with the help of a hand-held lantern light. We go through some of the most popular and oldest sections of Mammoth Cave just like they did in the 1800’s. This tour features parts of the Historic Tour, Gothic Avenue, Star Chamber, and Mammoth Passage tours.

This was really a fascinating experience. All you could see was darkness rather than the glimmer of the lantern near you. The ranger had a torch light and would light it up to show the important parts of the cave. It is true that the darkest dark can be seen in a cave.

Explaining History of the place

Ranger with her torch

Even after walking 7 miles and thousands of steps, the refreshing temperature won't make us feel exhausted. All you feel is the extreme happiness that you could experience a miracle.

PS: I saw this post recently and found it interesting 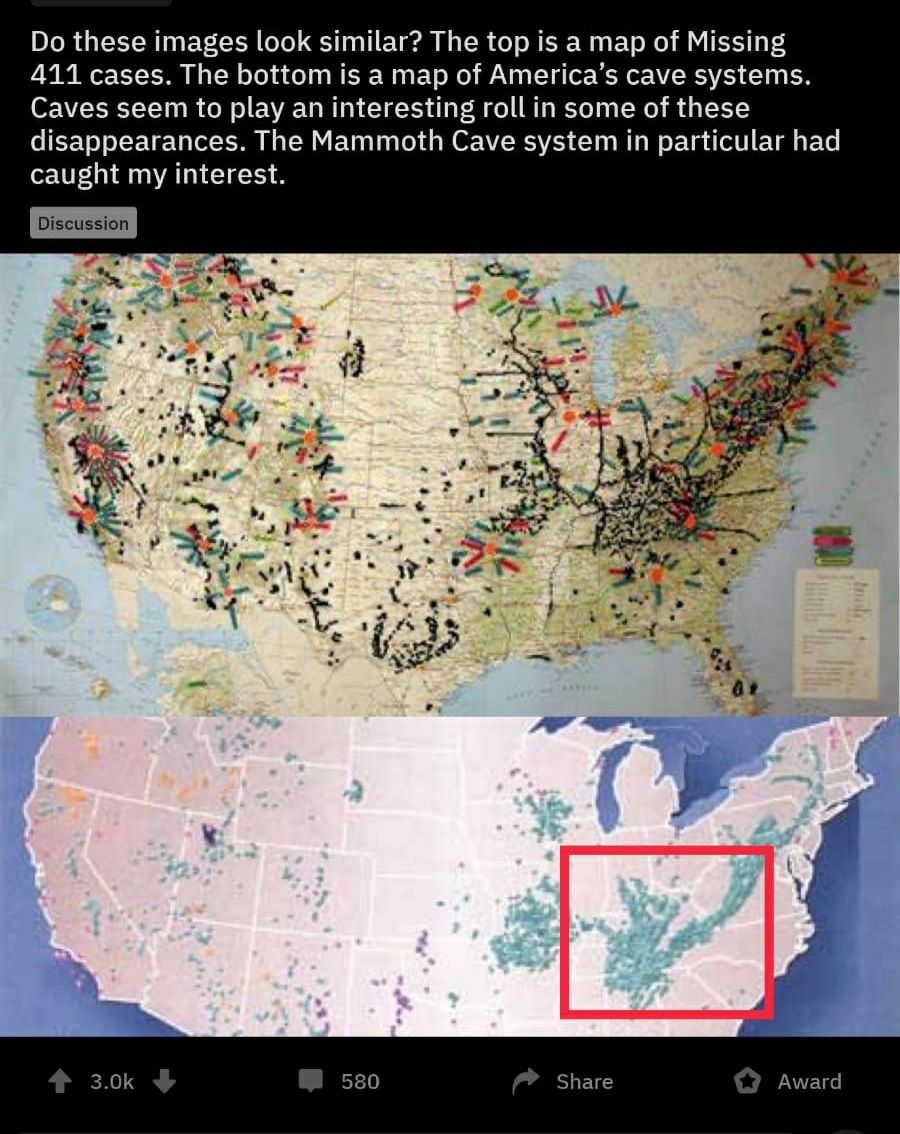