Marsar: The 'killer' lake of Kashmir

It's known as Tarsar's 'evil' twin that draws whoever dares to camp near it into its sinister waters. It's also reputed to be an 'elusive' lake that loves to hide behind a veil of clouds. What's the truth of Marsar?

Who wouldn’t want to set eyes on such an enigma? Tarsar’s ‘evil’ twin Marsar comes as an ‘option’ on the Tarsar-Marsar trek route—ironical since the name includes both—because Marsar doesn’t lie on the trail. Whichever way you choose to go, it’s an extra walk to Marsar and back.

Marsar (13,170 feet) is approachable directly from Tarsar (12,400 feet). If one climbs up the ridge towards the southern side of Tarsar, Marsar is visible. But the trail is extremely tough and hazardous.

So, the better alternative is to go to Sundersar (13,000 feet)after crossing the Tarsar Pass—which is a direct 1,000-foot climb from Tarsar—and take the trail from the southern side of Sundersar, diametrically opposite the campsite. This is what we did.

Sundersar is also approachable from Sumbhal near Sonmarg. Sumbhal is the last point to which cars can go on that side, just like Aru on the Pahalgam side. From Sumbhal it’s a day’s trek to Sonmasti, and another day’s trek to Sundersar. That was the way we returned from the trek.

To make it simpler, our route was as follows: Aru—Lidderwat—Shekhwas—Tarsar—Sundersar (and Marsar)—Sonmasti—Sumbhal.

Crossing the 13,400-foot Tarsar Pass was a thrilling experience in itself. It’s a direct 1,000-foot ascent and exactly the same descent on the other side. It took us about an hour to climb the pass, which gave a heavenly view of Tarsar and the surrounding landscape.

The contrast between the two sides of the pass was dramatic. It was like two different worlds—one green and vibrant, another stark and rough. The trail going down was gravelly and slushy. But the rest of the trail to Sundersar was comparatively easy.

Once we reached Sundersar, 11 out of 22 trekkers decided to visit Marsar after a 45-minute break. It took us an hour and a half to go to the lake and return to Sundersar campsite.

You can take the trail to Marsar by going around Sundersar either way. We took the western one. The trail around the lake was grassy, dotted with small rocks, but once the climb to the first ridge began, it was all boulders of varying shapes and sizes. And it was about a 600–700-foot climb.

Behind the ridge is a meadow, which had to be crossed. The other side of the meadow was also flanked by ridges. We had to climb one of those and in the valley below, spread out in all its grandeur was Marsar.

We could take a few steps down to a broad ledge that overlooked the lake. But that was about it. Going down any further looked really tough, perhaps impossible without gear.

Marsar did not look sinister to me. Neither did it look mysterious and elusive—there were hardly any clouds to veil it. It looked rather lonely to me, especially compared to its prettier ‘twin’, Tarsar. While the bright blue Tarsar is surrounded by greenery and wildflowers, the greenish-blue Marsar looks stunningly austere in its harsh and barren surroundings.

The sides of Marsar are quite steep and I wondered who had dared to climb down to camp by its banks. If we stood facing the lake, a valley seemed to lead straight to the lake on our left on the opposite side. But apparently that route—through Dachigam National Park—is not accessible either. Then how did the victim go down to the banks?

Could it so have happened that he had tried to climb down the steep side, slipped and fallen into the lake, where people found him later? Hence the ‘killer’ tag for the lonely Marsar? But then, I know too little about these parts to make any expert comment. After all, “There are more things in heaven and earth….”

We spent half an hour taking photographs and getting ourselves photographed with Marsar as the background. And then, it was time to leave the enigmatic lake alone with its secrets. 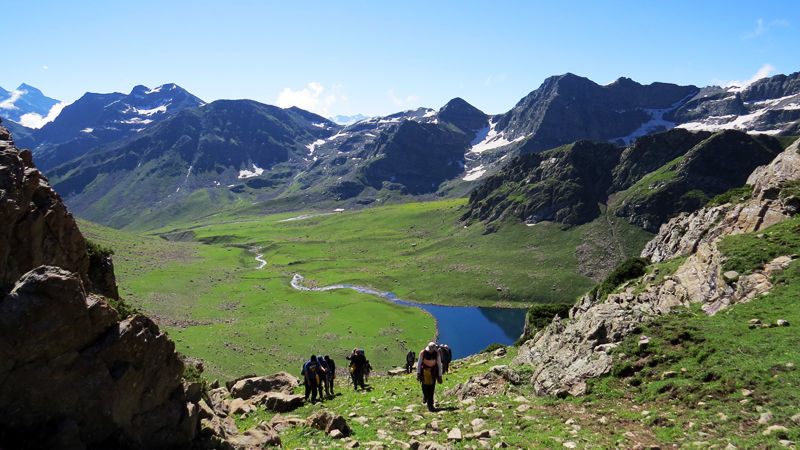 The other side from Tarsar Pass 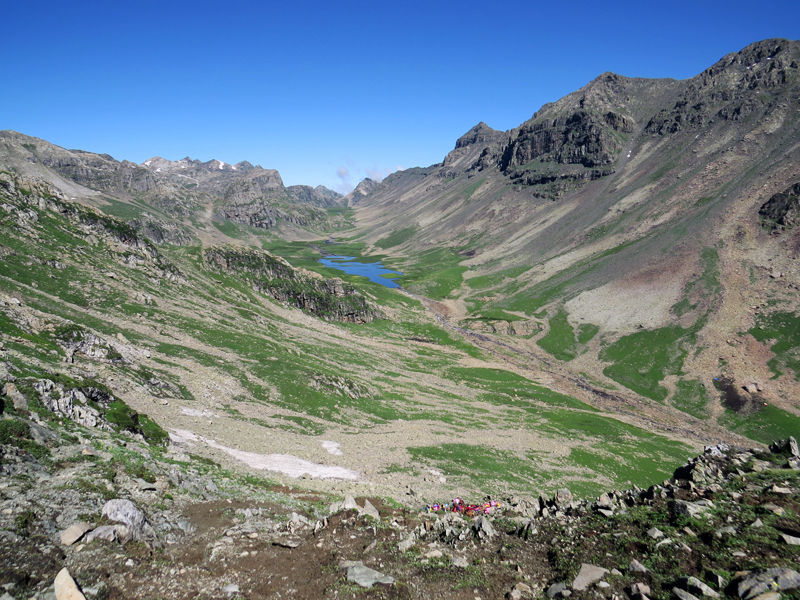 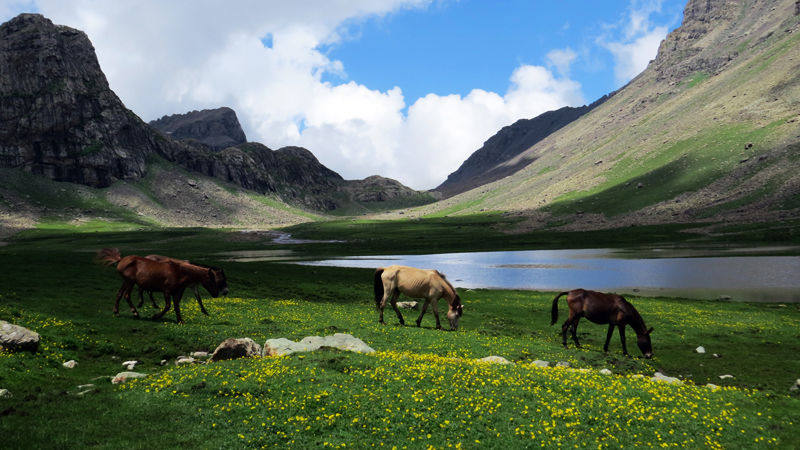 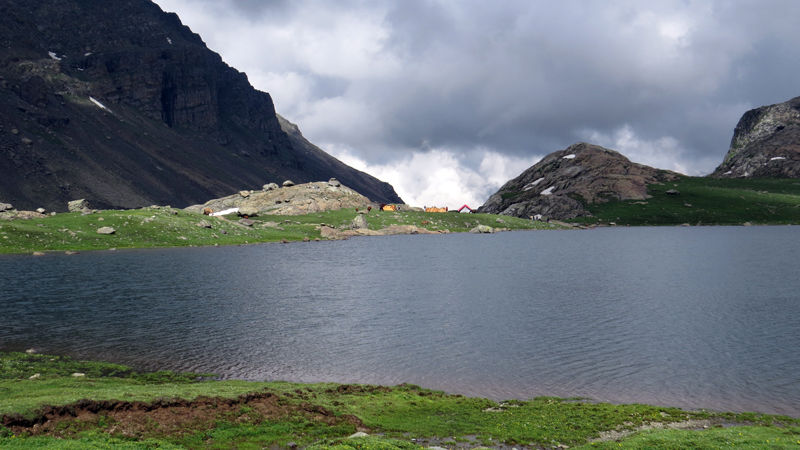 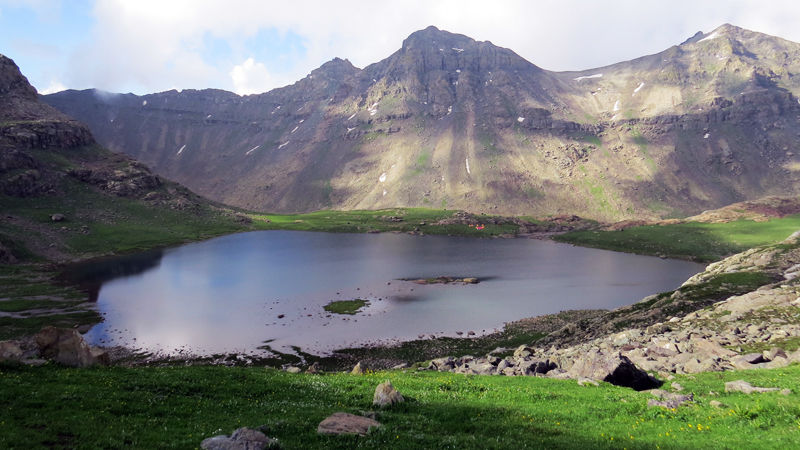 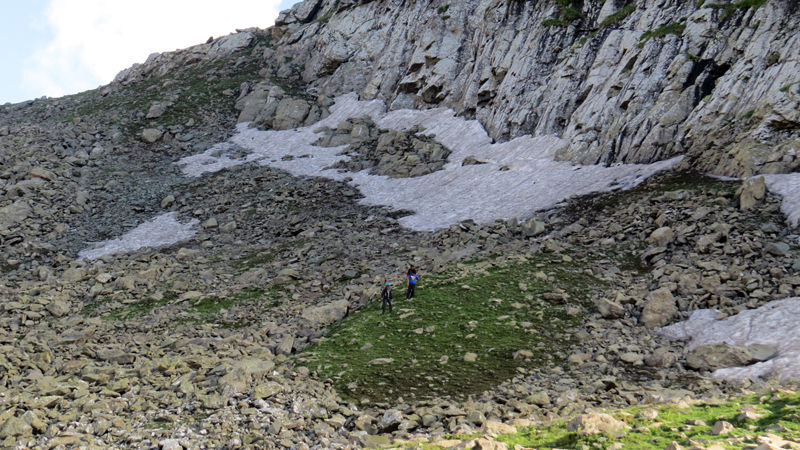 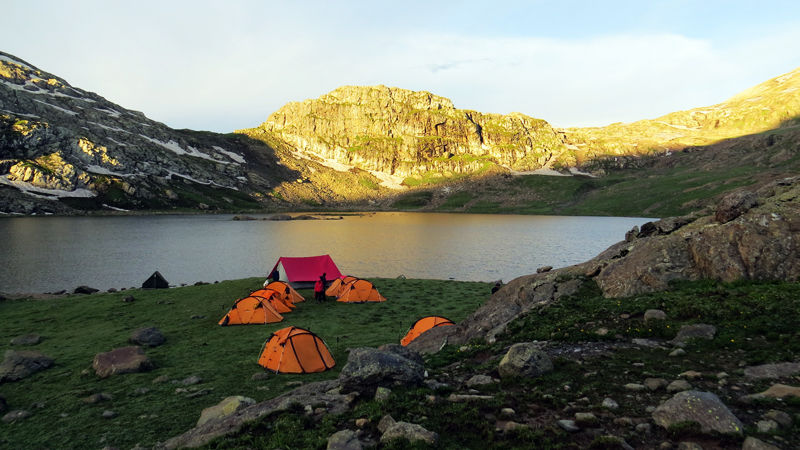