Bali Travel GuideBali TripsWelcome To The Adventurous Side Of Bali

Welcome to the Adventurous side of Bali

All about that adrenaline rush 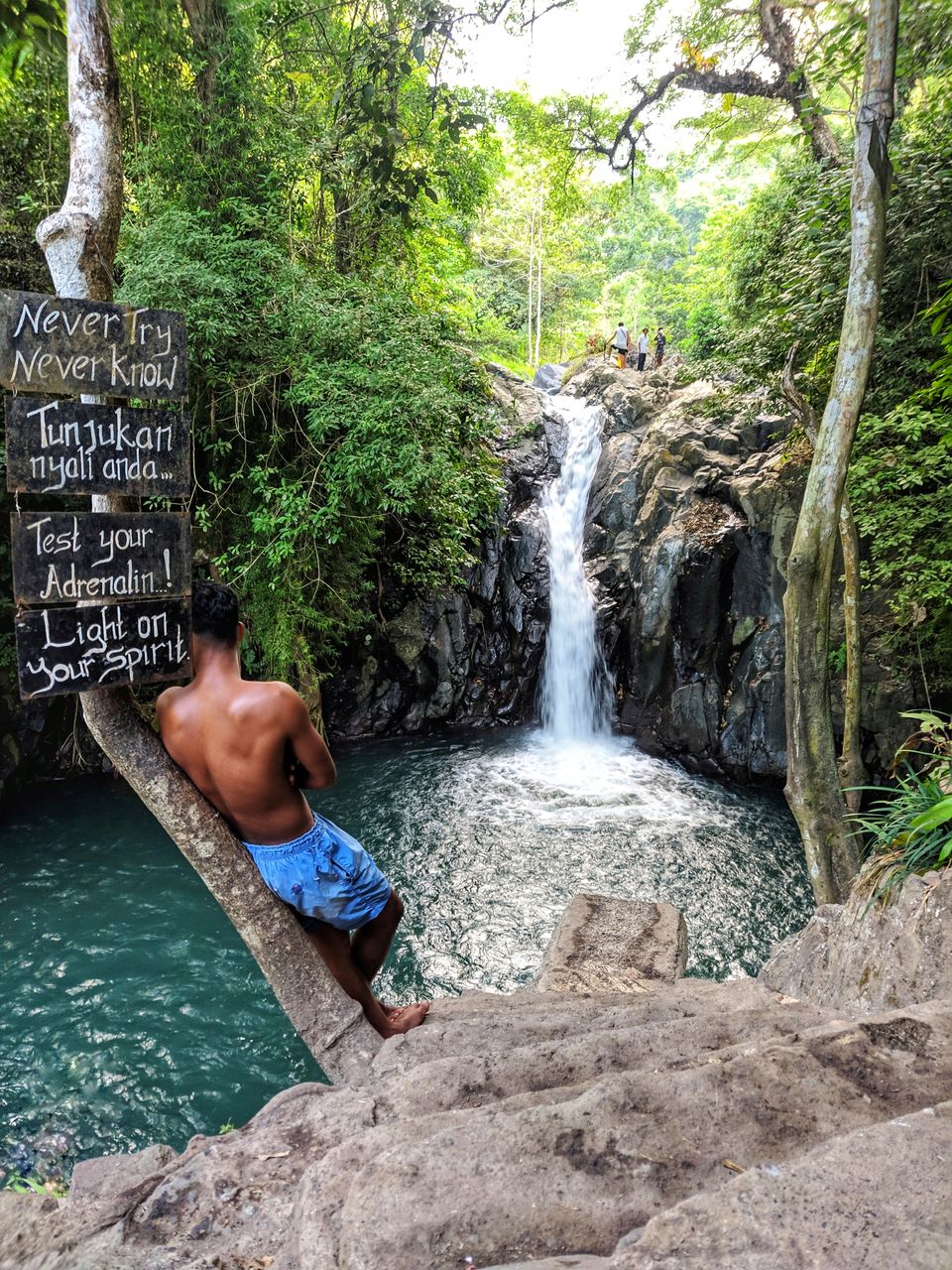 Two days had passed since we had arrived in Bali and all we had done was roam around and visit places like tourists. You can read more about it here: The Perfect Start To Your Bali Vacation

It was high time that we started doing offbeat things which suited us instead of just visiting famous tourist spots and that’s what we set out to do in these next two days. We woke up in the morning, had breakfast prepared by the villa manager, hopped on our scooters and left for Tegallalang Rice Terraces to take in the vast rice fields that lay there. It was about a 10 minute ride to the place filled with scenic views along the way. Once we got there we started searching for a spot to park and found a parking lot where we even got tickets to enter the fields. The span of the rice terraces is very vast and consists of many rice fields spread out in the form of terrace farms. Different fields have different entry points and prices depending on what lies inside, i.e., the famous swings, bird's nest etc.

Taking it all in 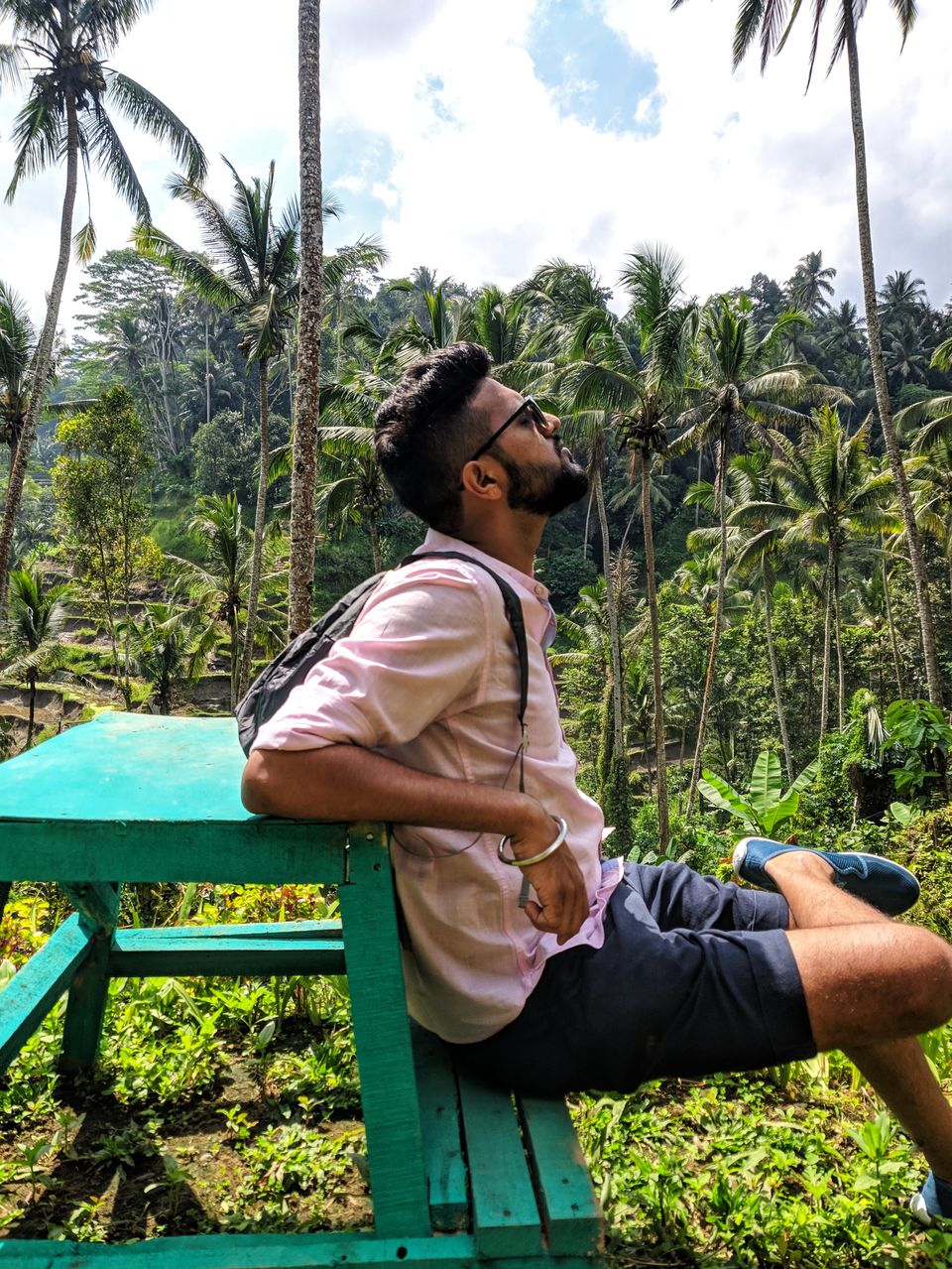 Left the heart back there 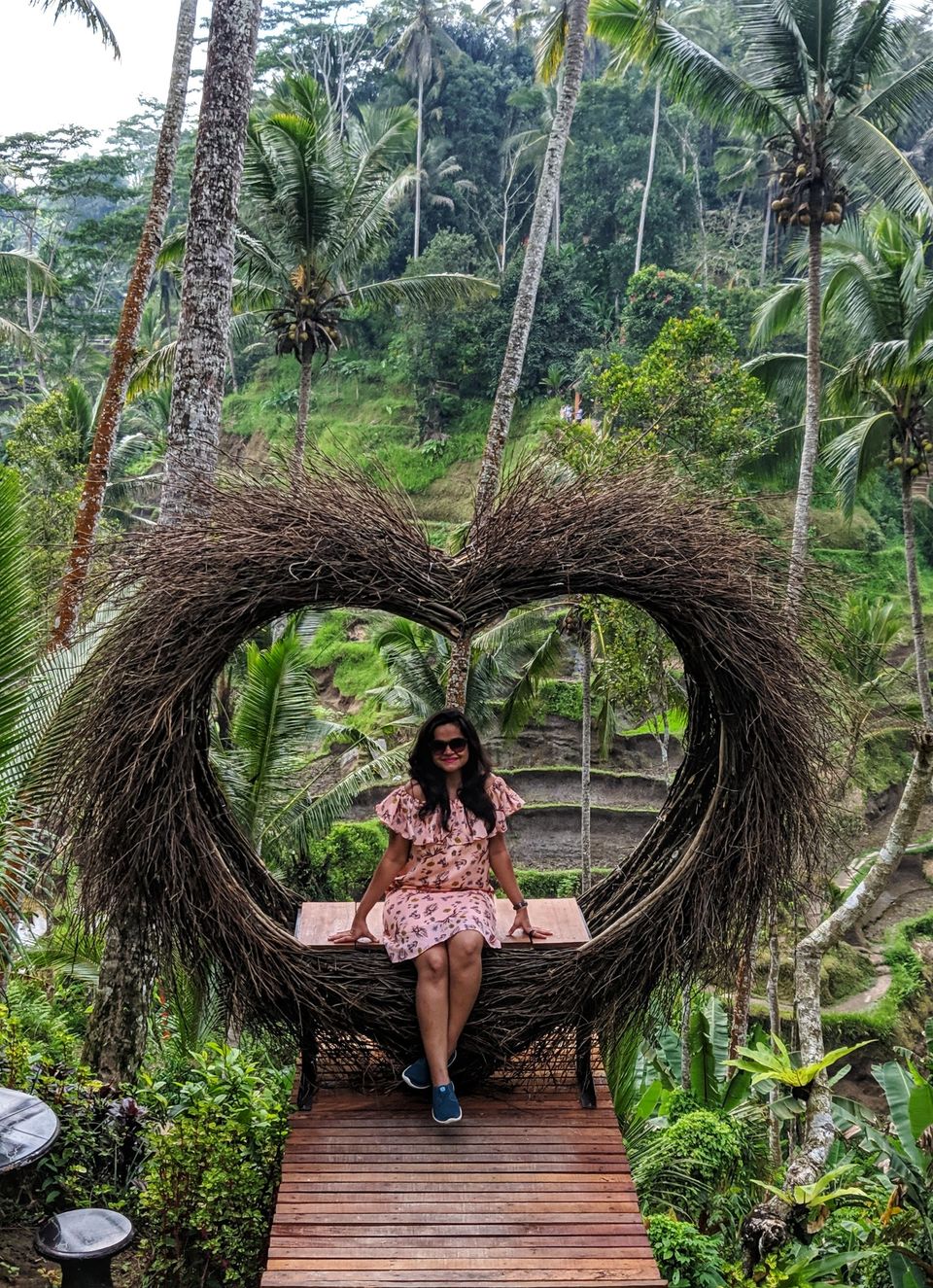 The one we entered costed us IDR 10,000. The entry to the rice terrace was through a cute little cafe overlooking the rice terraces. On entering the terrace we saw the photo spots that are so famous on Instagram and went over to click pictures but realized that we had to pay for that as well. The initial price quoted was IDR 150,000 for 5 spots which included the swing. We got down to business and brought the price down to IDR 50,000 per person which was pretty great value for what was being offered. After a long photo session and some scary moments at the swing we decided to head back to the villa and embark on the long coastal road journey to our diving school. 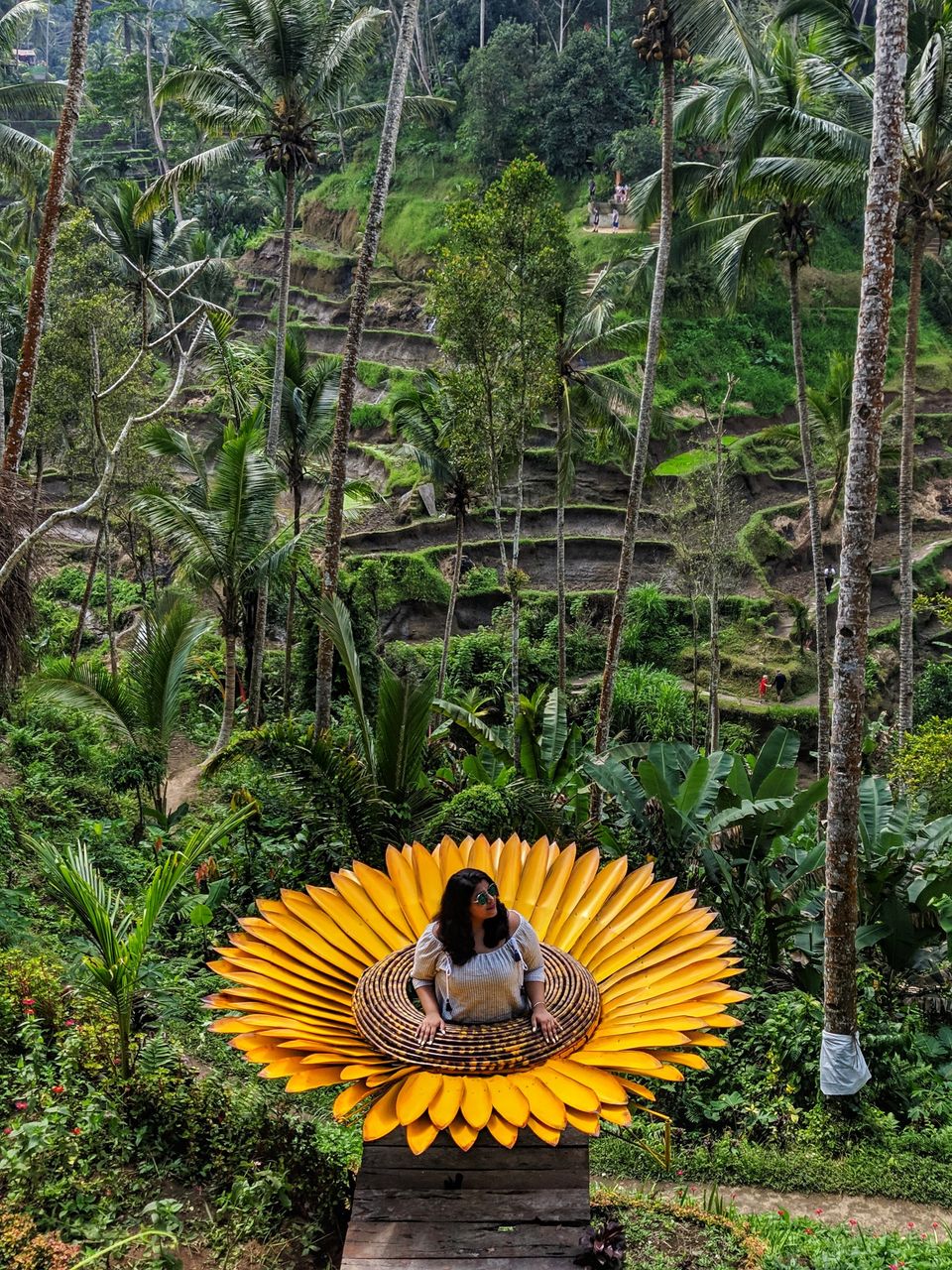 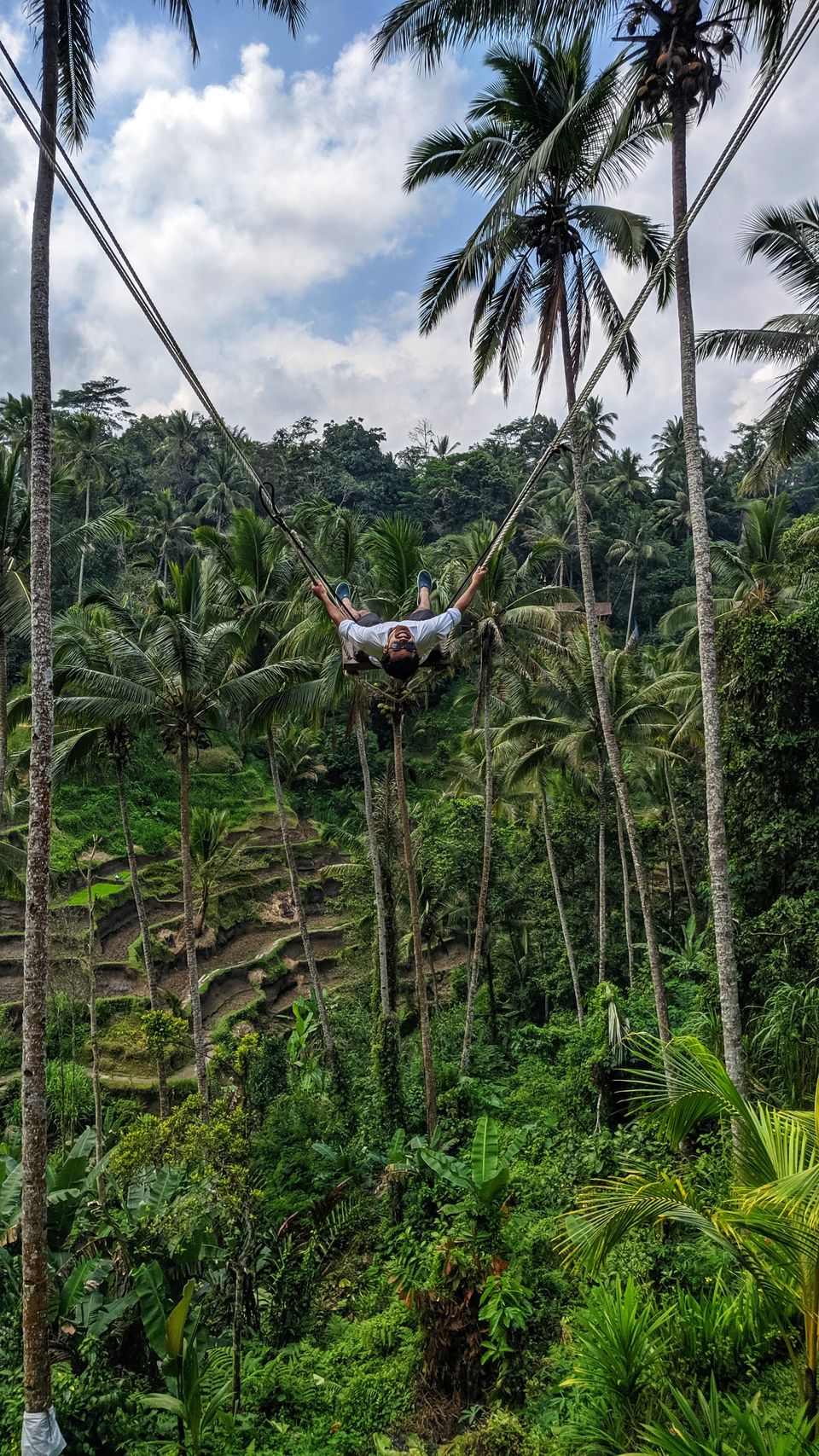 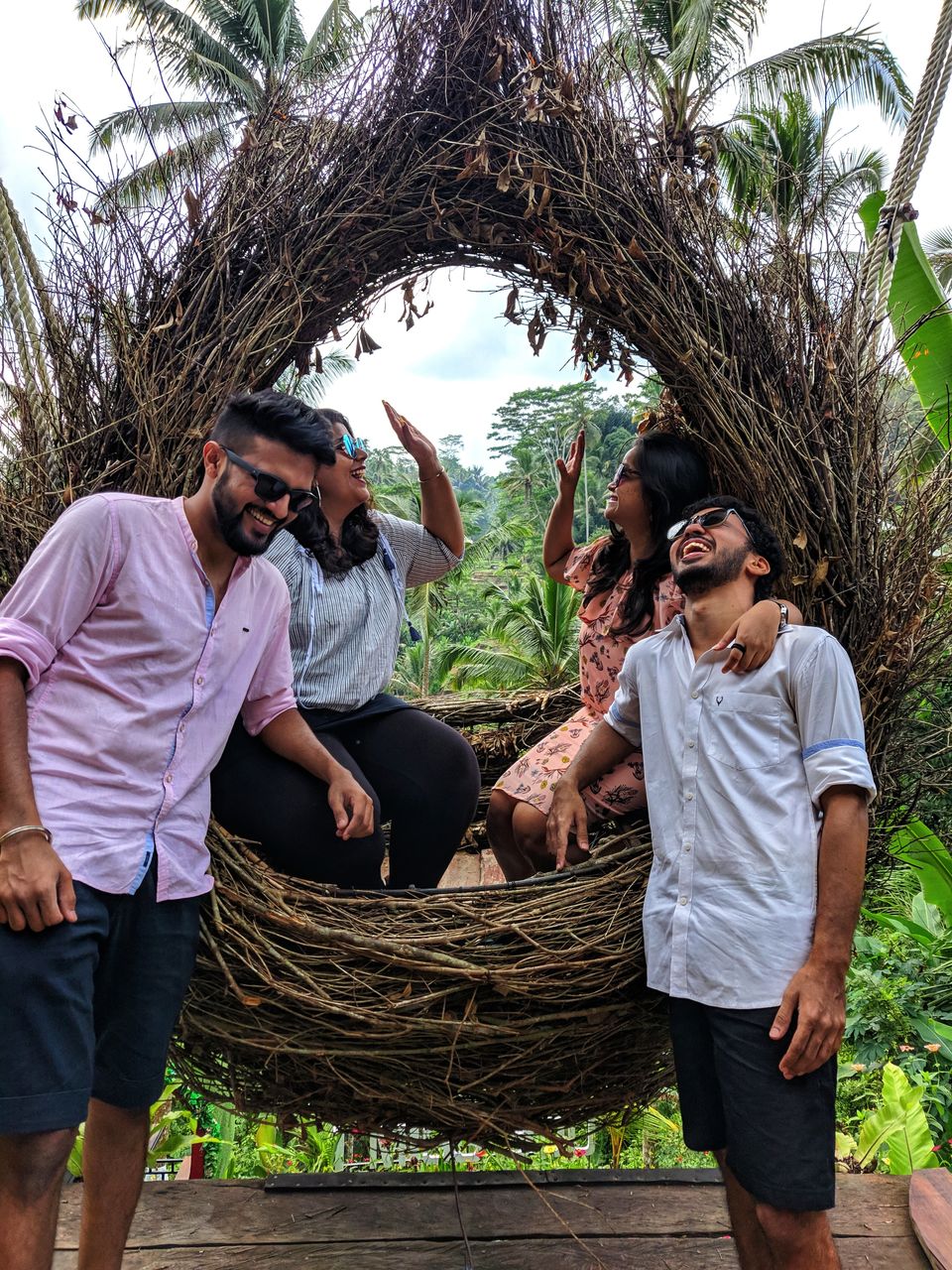 We wrapped up our things at the villa and left for Ulun Danu Beratan, little did we know about the beautiful roads that awaited us. After a few miles of city roads, we got on to the open and serene roads of Bali that are not trodden upon by a lot of tourists. The roads went from being straight for miles to winding up mountains with the skies going from clear and sunny to cloudy. A pleasant ride and an hour and half later, we arrived at our destination which is situated by the bank of a lake in between mountains. The temple complex has an entry fee of IDR 50,000 and the parking for two wheelers costs IDR 3,000 which is a reasonable amount. After acquiring the tickets, we entered the complex to find one of Bali's most featured spots and it was no surprise that we were awestruck. There are two temples with roofs that are a local design and standout. It is a great place to sit back and relax by the lake with such beautiful sights to take in that you don’t realize as time passes by. 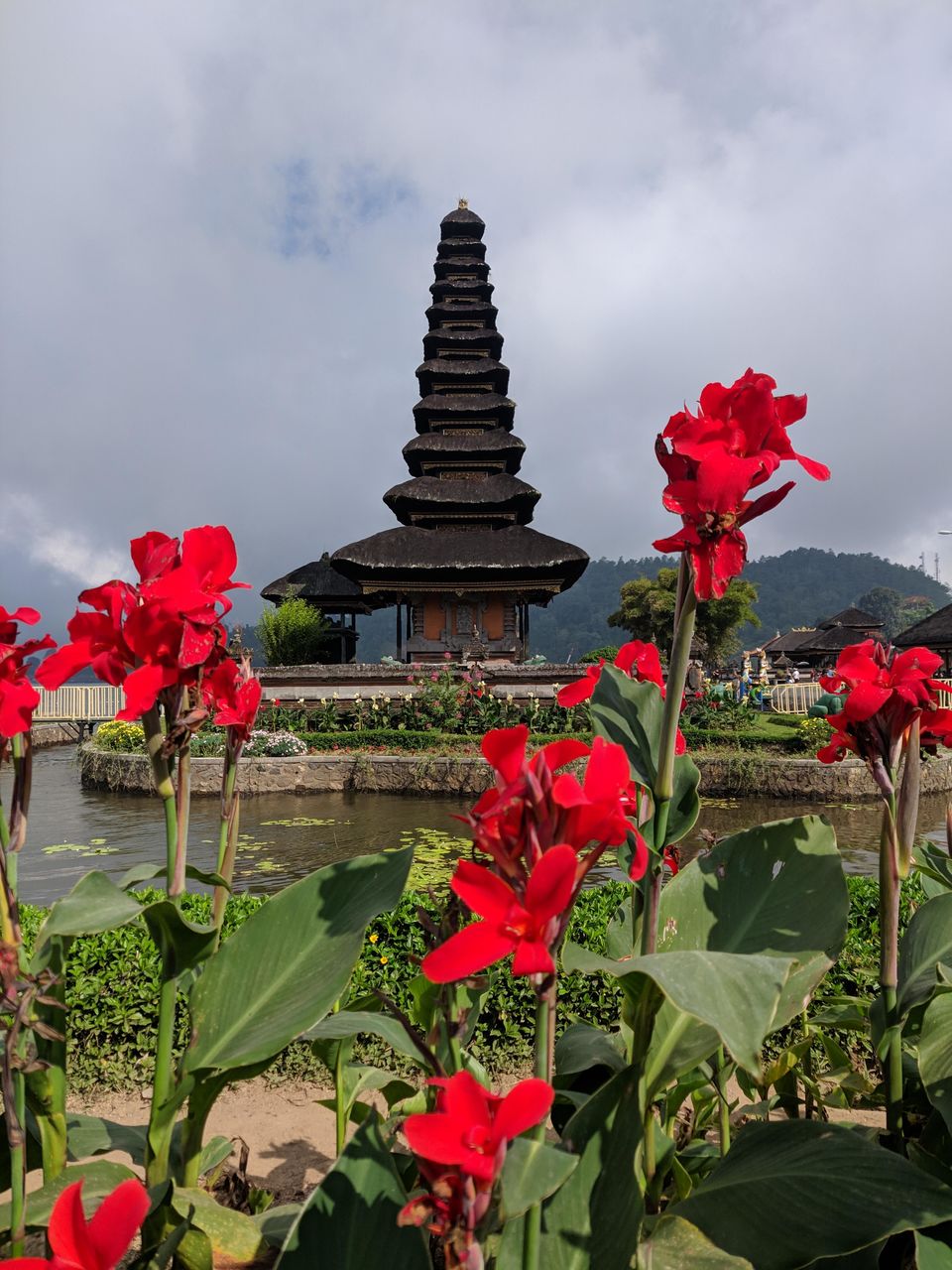 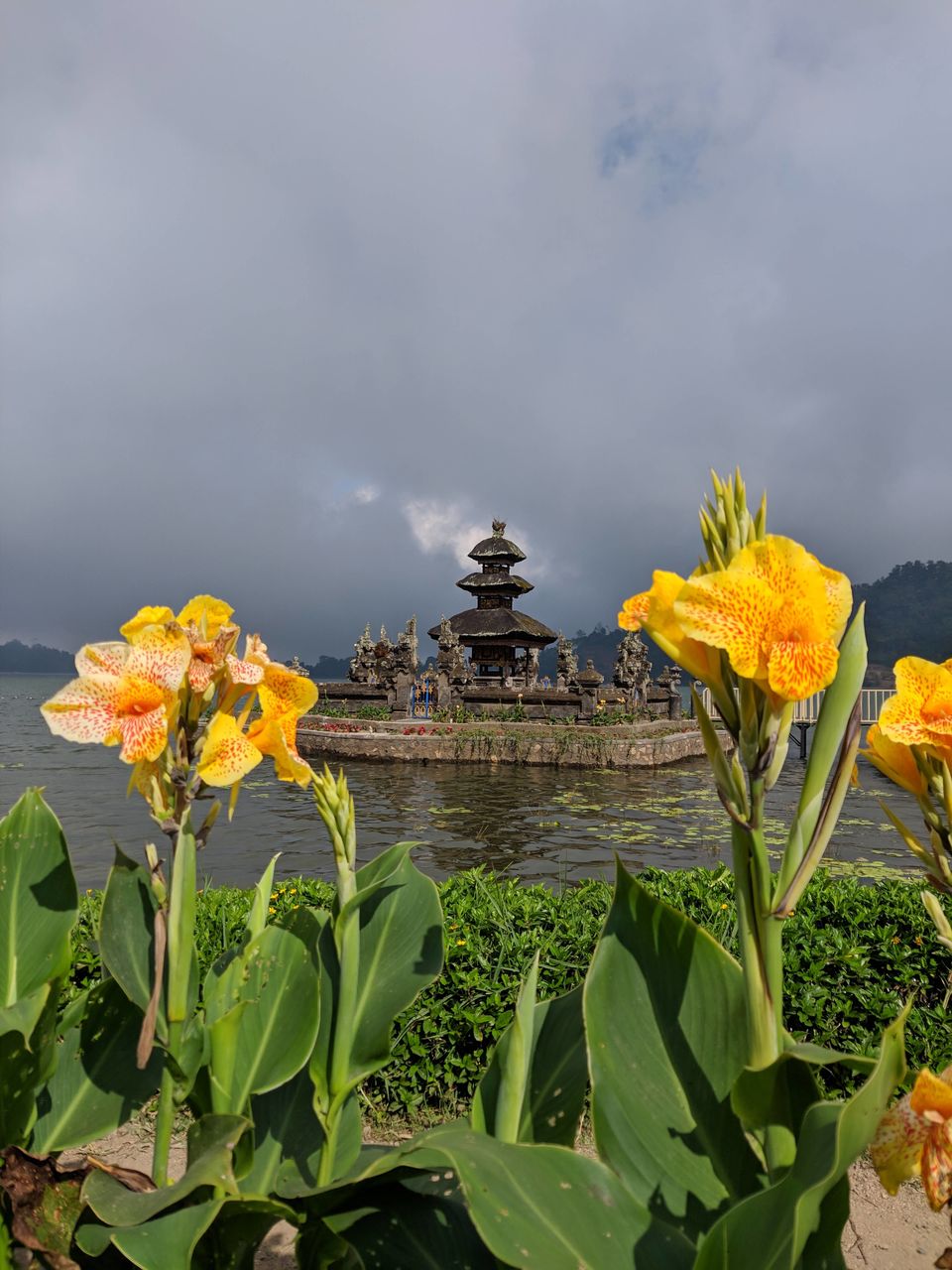 Temple on the bank of a lake 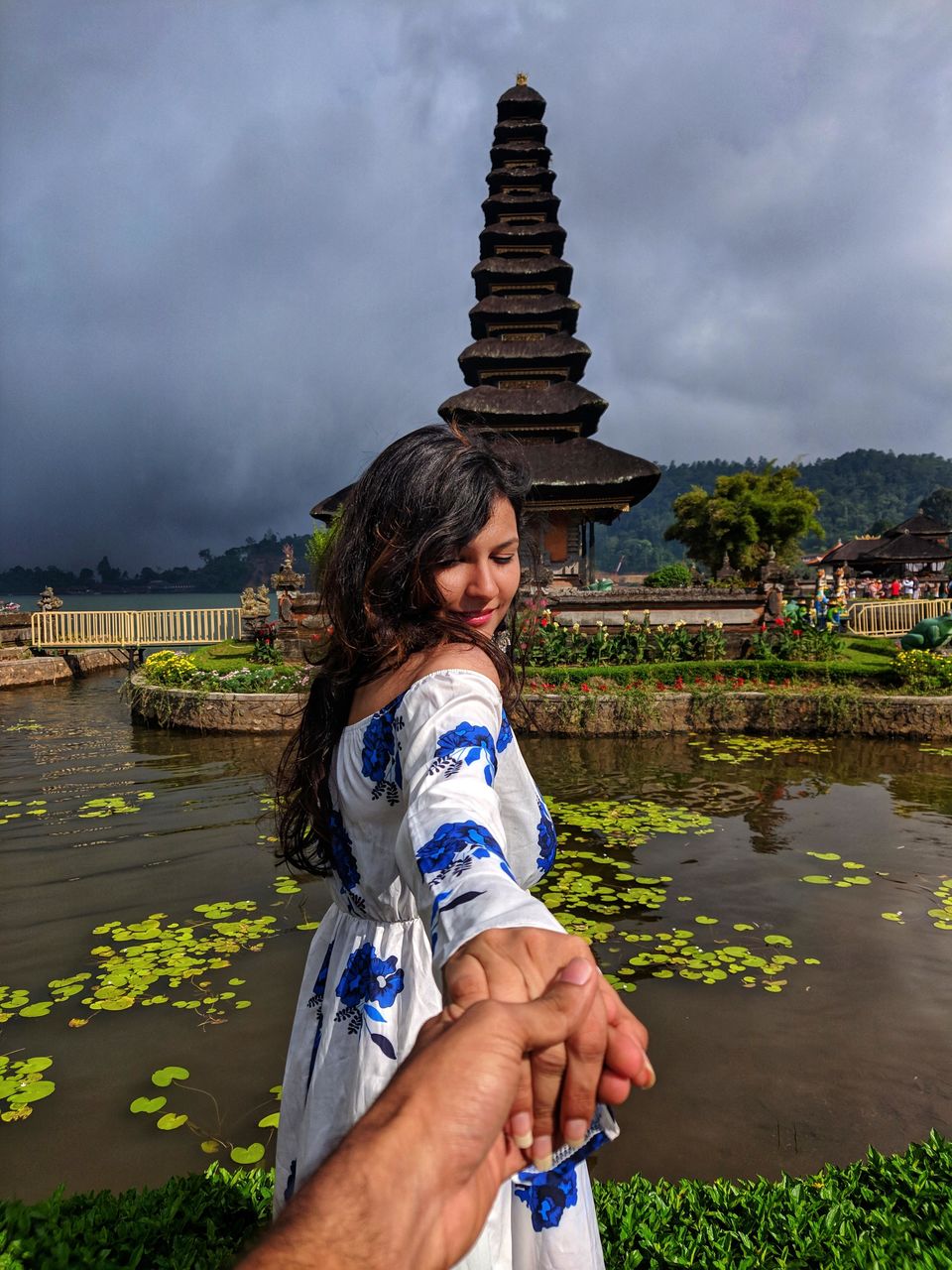 After spending an hour or so at the temple, we set off to our next and most awaited destination for the day. Around an hour on roads winding down the mountains, we got to the place from where we had to hike to the falls. We parked our scooters at a parking spot and set out to the falls which were around 10 mins away at the end of a few stairs heading downwards. To our pleasant surprise there was not one but three waterfalls in a line at walking distance from each other. What made it more special was that each one could be jumped while each being higher than the previous one. Before we could begin jumping off, we were asked to pay IDR 125,000 per person by the local guides for the entry to the falls, the lifejackets and the guide. We were now ready to jump the first waterfall that apparently was 5 meters high and started having a go at it, the first jump was pretty tough for each of us as we were skeptical about the safety of the setup but once we got over it there was nothing stopping us. After a few jumps, the guide took us to the rocks from where the water was falling and made us slide down as though it was a water slide. I have to admit that it was a bumpy ride but was thoroughly enjoyed. Once we got done with the slide, we decided to go for the higher jump at the second waterfall which was around 10 meters high. When we got there, we realized the height that we were going to jump and were truly scared, so scared that some of us backed out of it. The rest of us had a blast jumping off the cliff and got a few hard water spanks in the process. With daylight disappearing and one waterfall left, we headed to the last and tallest one which was about 15 meters high and started questioning our decision of jumping off. We started thinking of the pros and cons of the jump but then the thought "YOLO" popped up in our head which was enough to push us off the cliff. The jump was a brief run to the end of the cliff, a moment of "I am still falling" feeling and a lot of blue to end it. The adrenaline rush we felt in the jump was unlike anything we had experienced before which led to us doing it again after which we had to pack up and leave as it got dark. Fortunately there was an empty room where we changed our clothes and hiked back to where we left the scooters.

The sight that greeted us 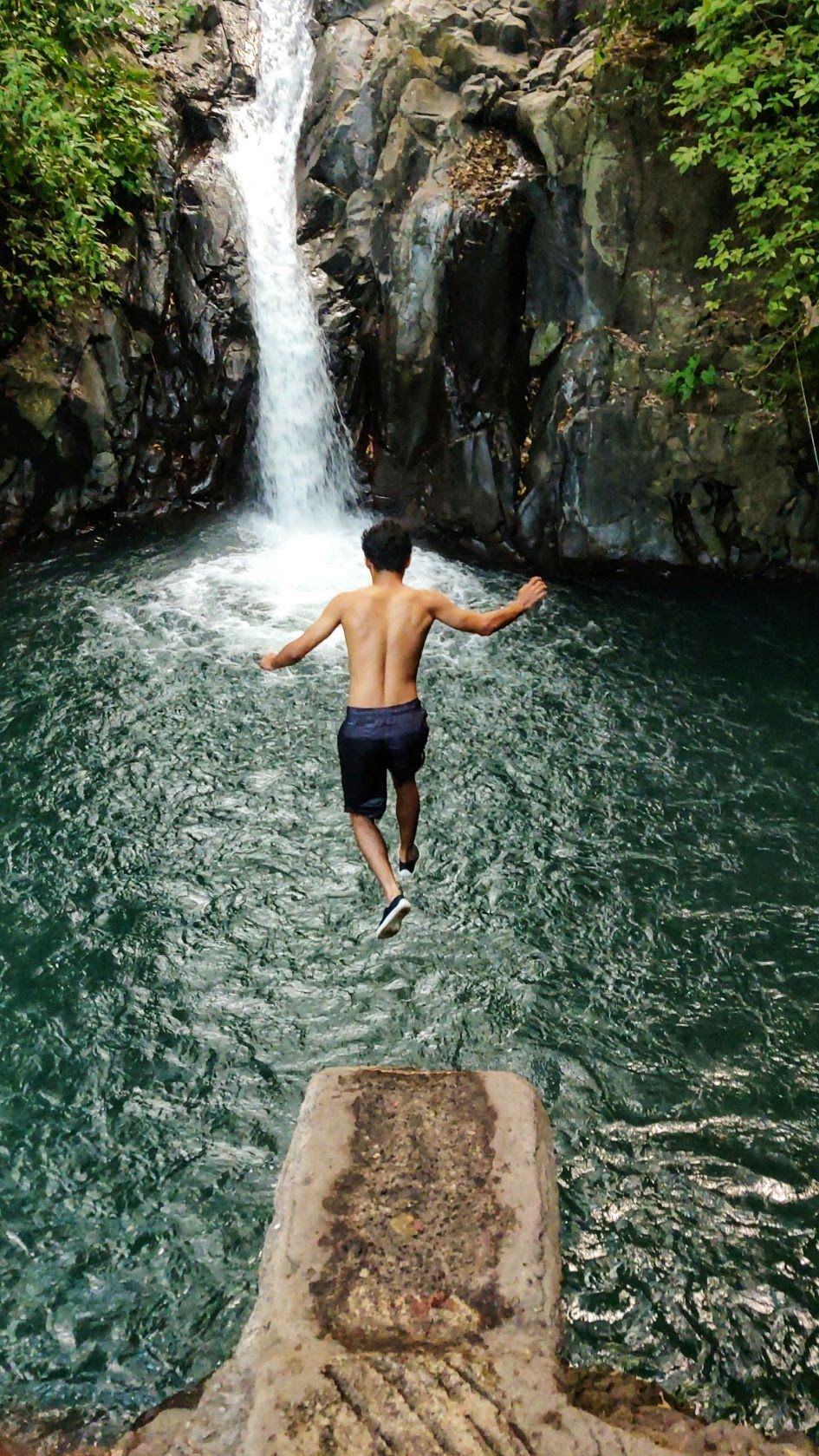 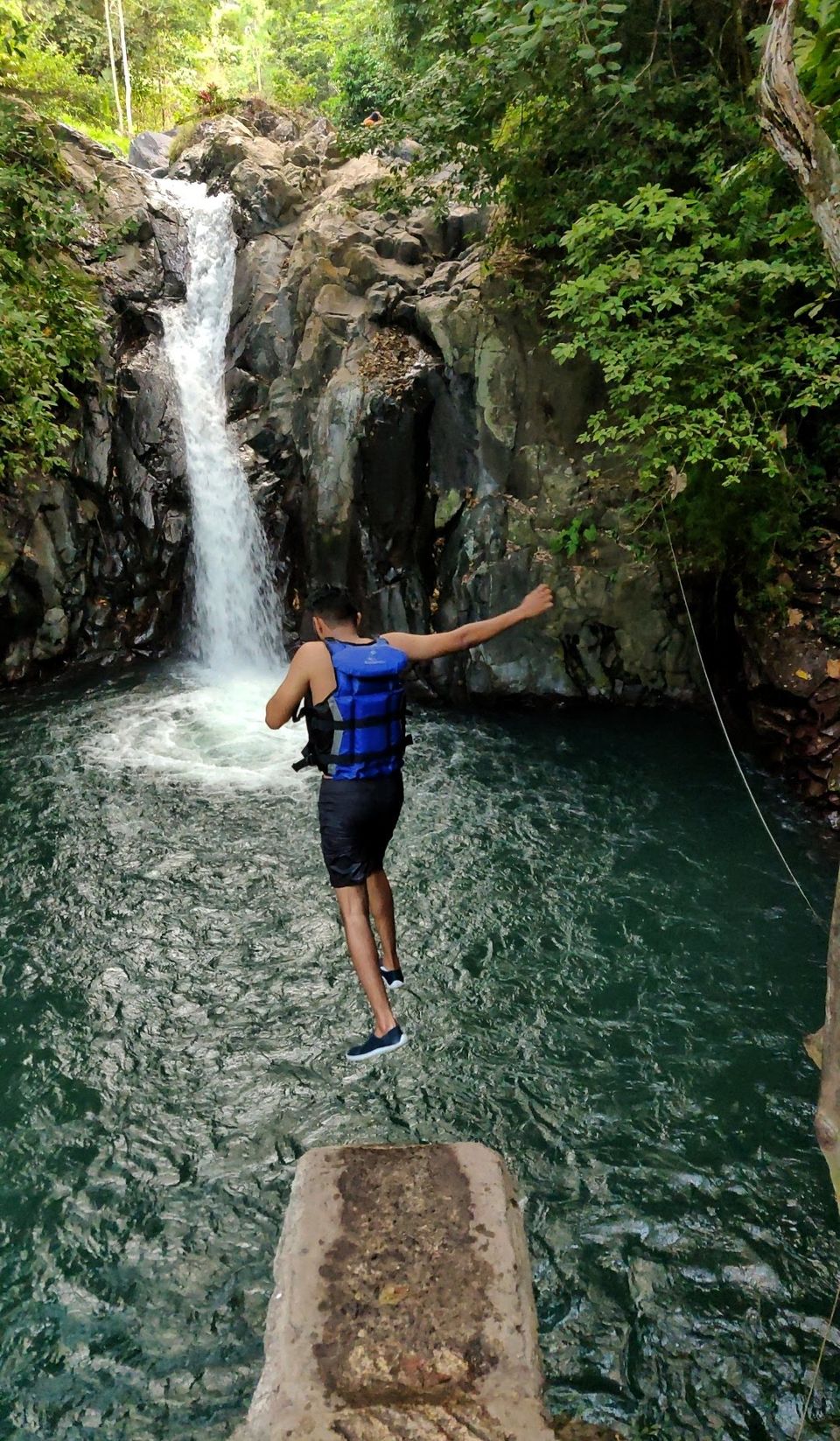 We picked up the scooters, had some snacks at a restaurant close by whose owners were very helpful and sweet. They charged our phones and provided us with free WiFi to figure out the way to our final destination for the day. After spending about half an hour at the restaurant, we hopped on our scooters and set off from the North of Bali to the East of Bali riding for two hours on the lonely coastal road while singing songs to entertain ourselves along the way. The ride will always be one of the most memorable rides of our lives, reliving the old times in paradise. It was about 10 PM by the time we got to our destination, Dive Concepts. Since we hadn’t got a chance to have dinner on the way, we started looking for places close by to have some but were unable to find any at this time of the night. Determined to fill our stomachs that night, two of us left on a scooter to find anything to eat around. After riding west for a while, we found a small general store from where we picked up some chips and banana bread to satisfy our hunger.

The next morning was exciting as we had a SCUBA dive to the USAT Liberty Shipwreck lined up. We got up and had some amazing breakfast at the restaurant in the dive concepts accommodation. Once we were done with the breakfast, we geared up, got into the transport and left for the beach where we were going to get accustomed to our gear before diving to the shipwreck. After a short 5 minute ride we arrived at the beach and were debriefed by our instructors, Jordan and Simon, who were Belgian and French respectively. After getting done with the theory, we went to the coral garden to get familiar with our gear and spent around half an hour doing that. Post that we got out of the water to refill our tanks before we could go for the dive to the shipwreck. Now that our tanks were full, we got into the water and started swimming towards the shipwreck which was about 80 meters away from the shore. The moment the shipwreck appeared in sight, we were overwhelmed by the sheer size of it. It was like a completely different world down there. The aquatic life looked like it was straight out of the movie Finding Nemo which left us staring helplessly at the fishes. The shipwreck was crowded with divers exploring at different depths but our instructors guided us around the ship such that we could experience most of it as we were not allowed to dive below the depth of 10 meters. Once we were done with the dive, we left for the accommodation, changed into our clothes and rested for a while. After we were done resting, we packed up, made the payment which was IDR 700,000 per person and went to the restaurant beside the place for some lunch which turned out to be lip smacking. 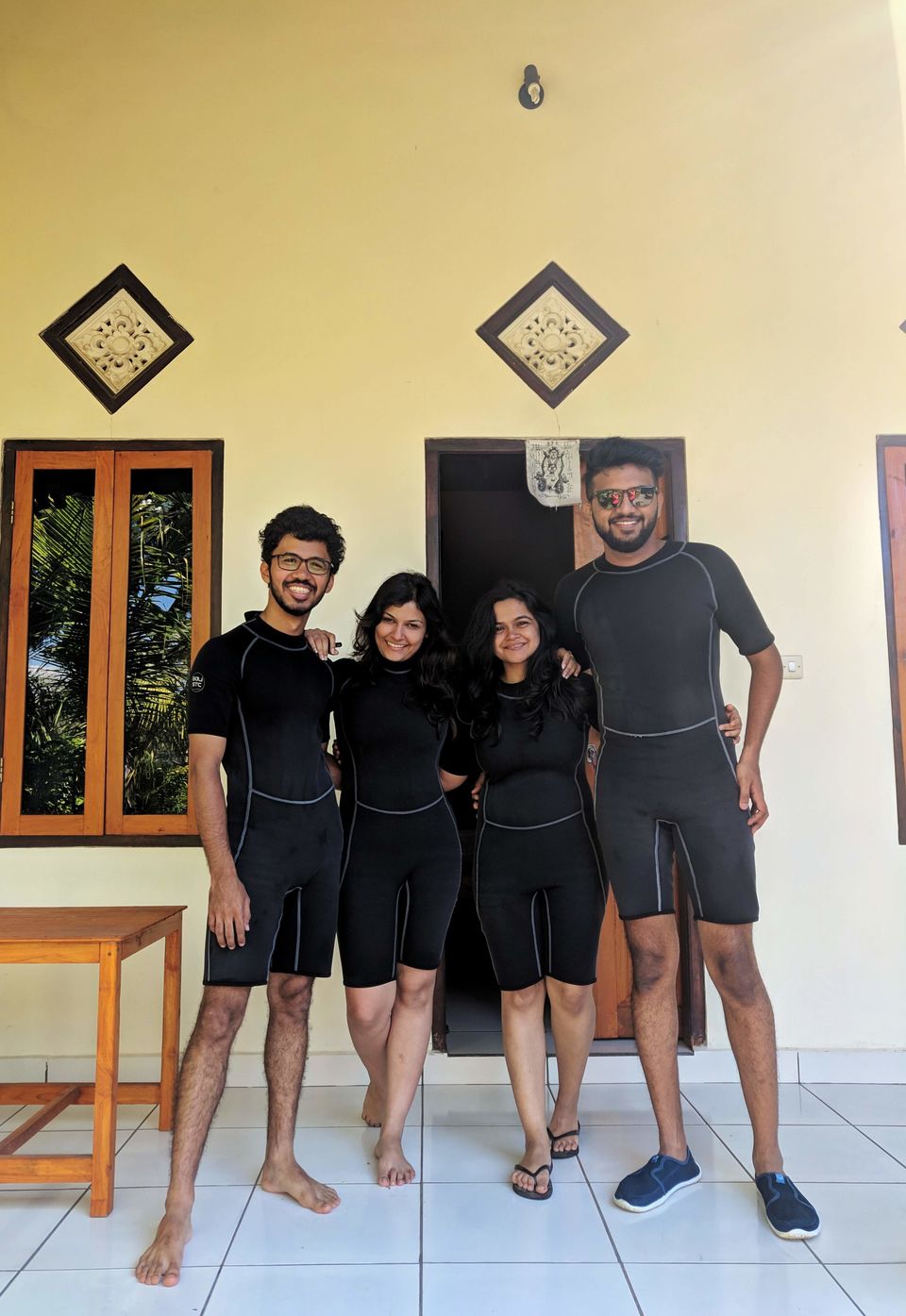 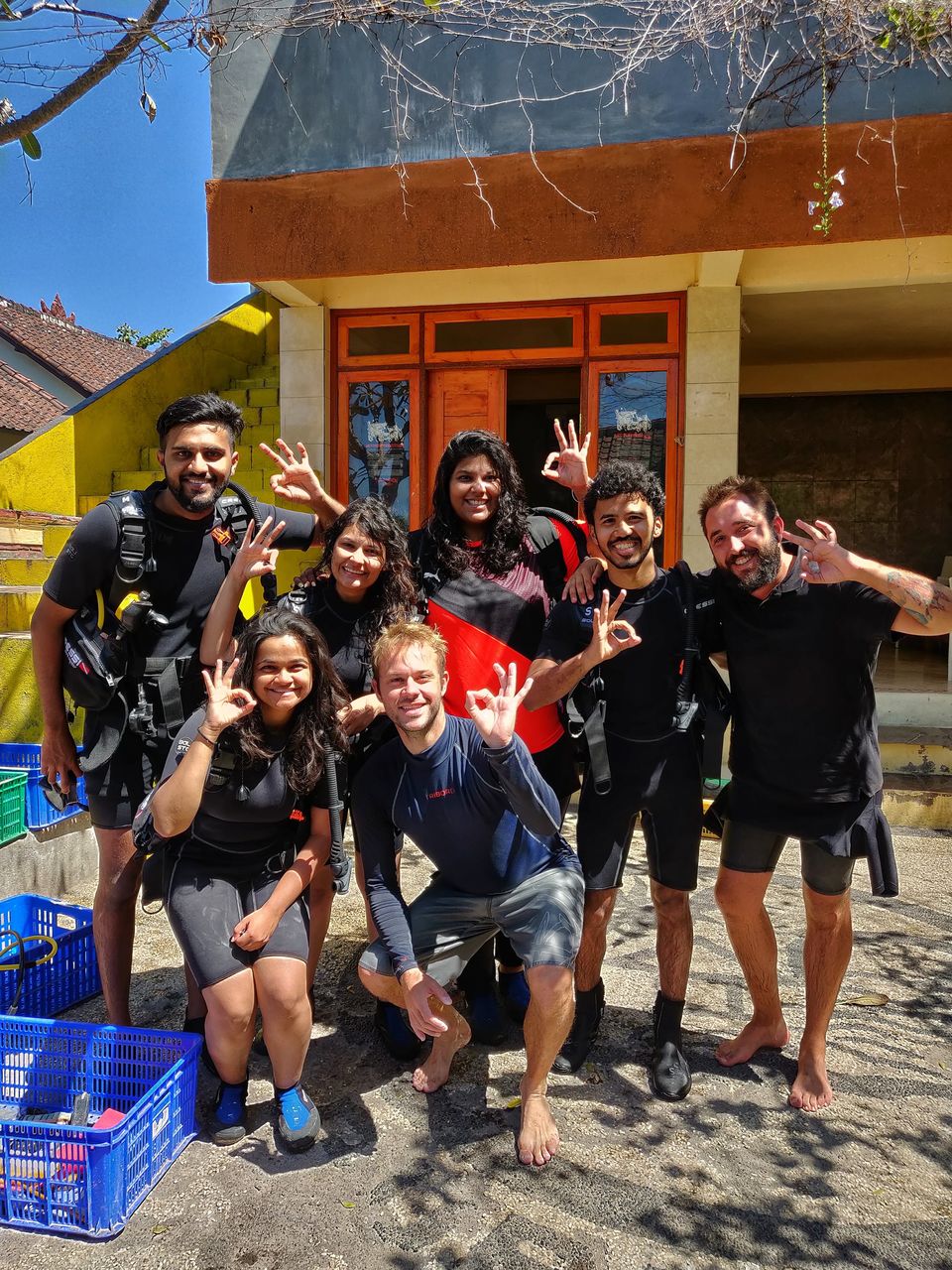 A volcano in the backyard to top it off 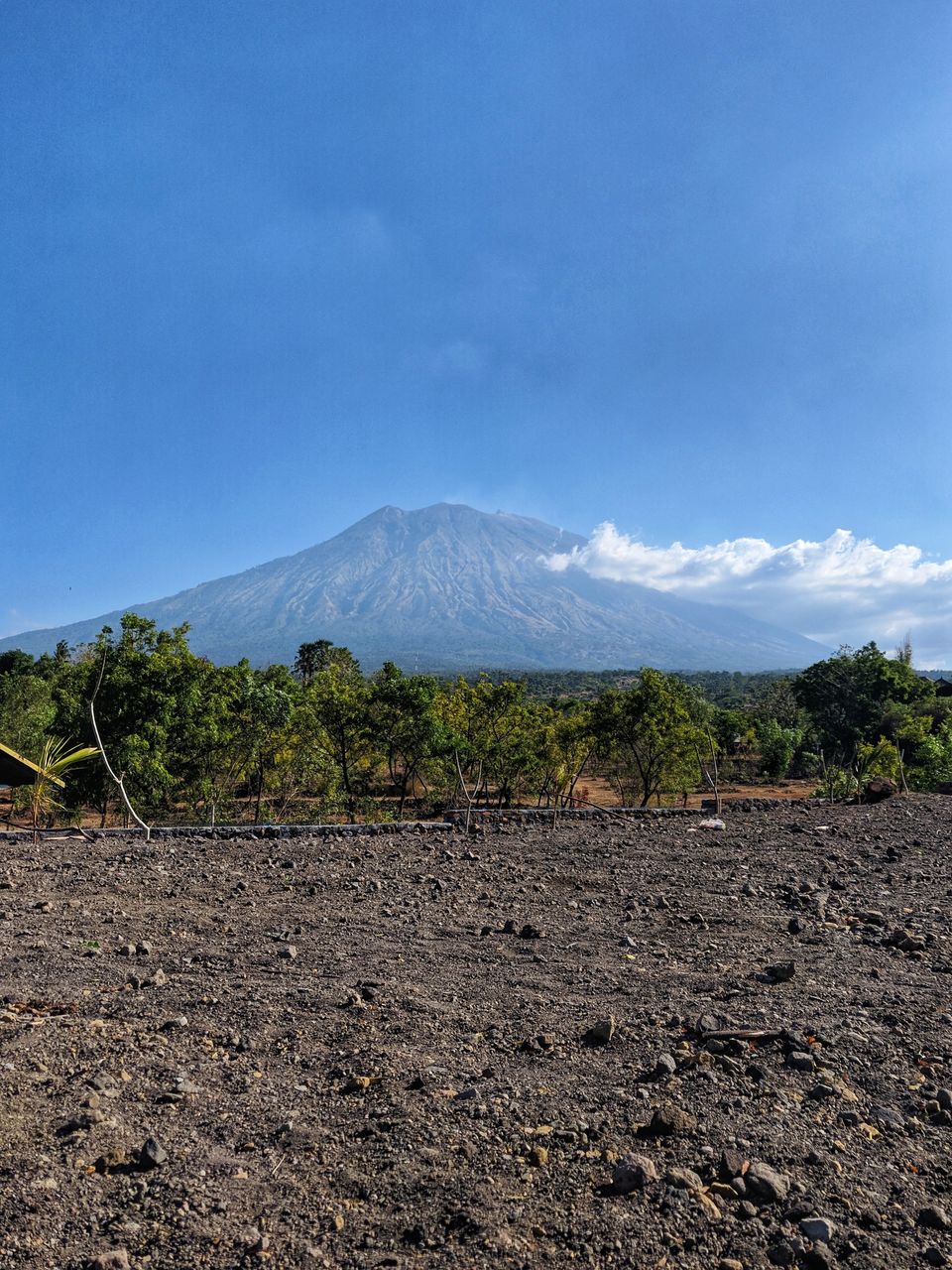 During lunch, there was a very important decision that we had to make which was whether to go to Pura Lempuyang or Taman Tirtagangga as we did not have enough time to hit both. We split up where 4 of us left for Pura Lempuyang and the other 2 went to Taman Tirtagangga. We set out together as the same road would take us to a point where we would separate and head to the destination of our choice.

The road to Pura Lempuyang was a climb along the mountain which took us about 20 minutes. Once we got there, we parked our scooters and got into the line to click pictures at the Bali gates that the temple is famous for. One thing to note though is that you necessarily have to wear a Sarong to enter. The backdrop has a volcano which makes the view a pleasure to the eyes. The line lasted for about an hour after which we got to our turn and were asked to pose quickly as there were others in line as well. Each of us got 3 pictures before we had to move out of the frame but people who pay the guy clicking the pictures can get more of them. 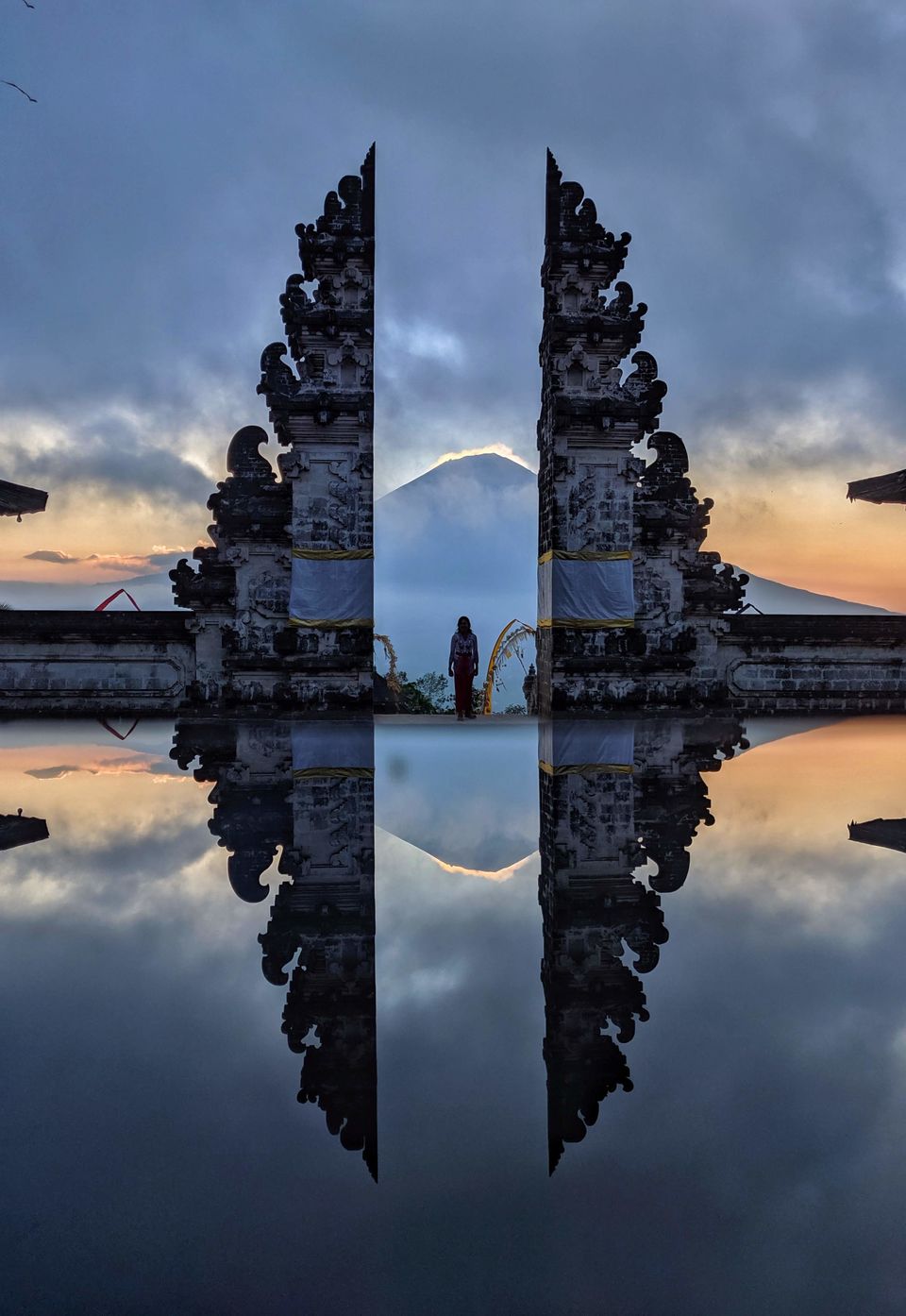 After a few miles of riding past beautiful rice fields we arrived at Taman Tirtagangga which is not hard to find as it is on the main road. We entered the complex to find a lot people walking around on the stones placed in the water. It felt a lot like Takeshi's Castle which excited us and we entered the stone path. We had seen a lot of pictures of this place on Instagram and wanted to get that money shot. The photos you might have seen on Instagram where the fishes are around the model require you to have fish food to attract them. The entry to the complex closes at 6 PM but we were allowed to sit till 7 PM. 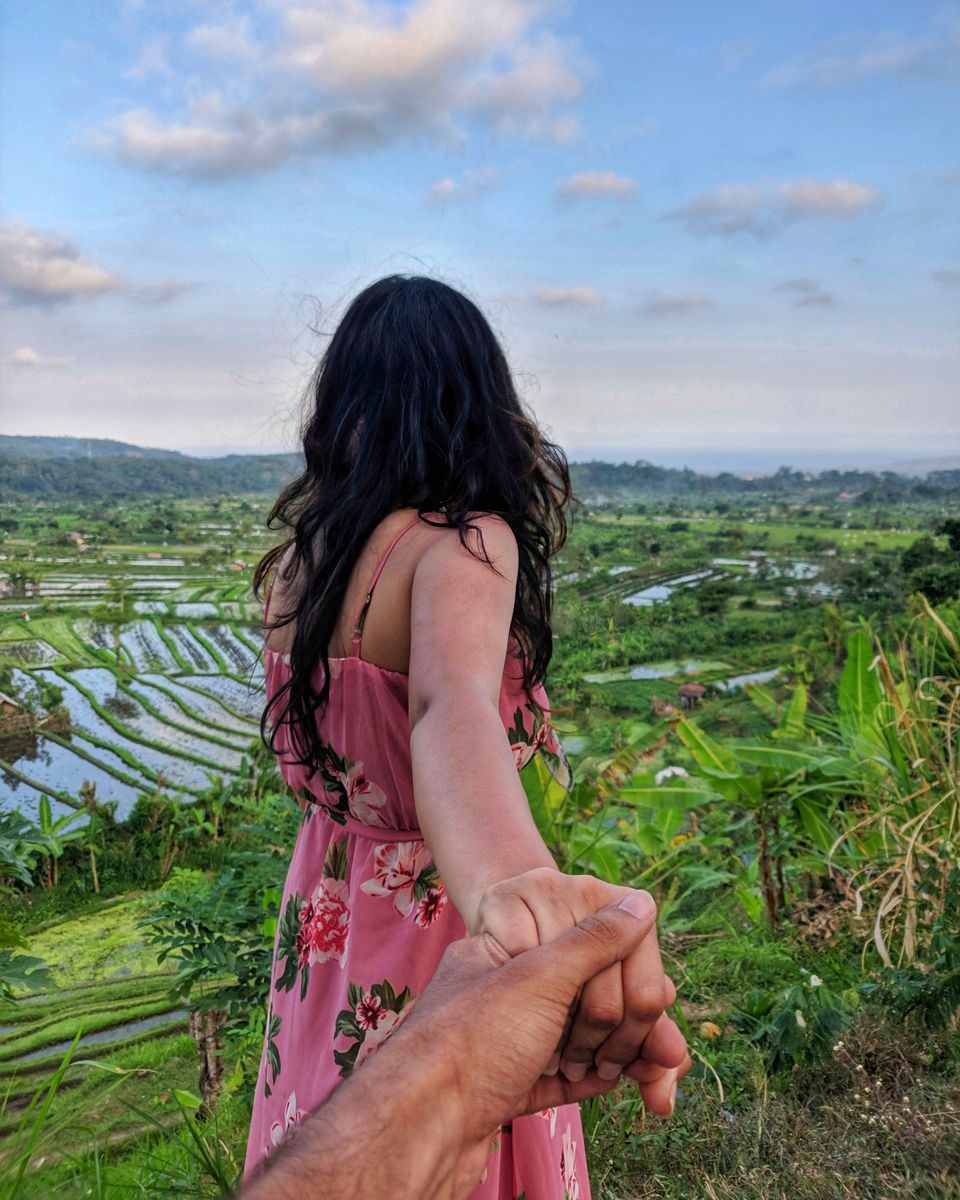 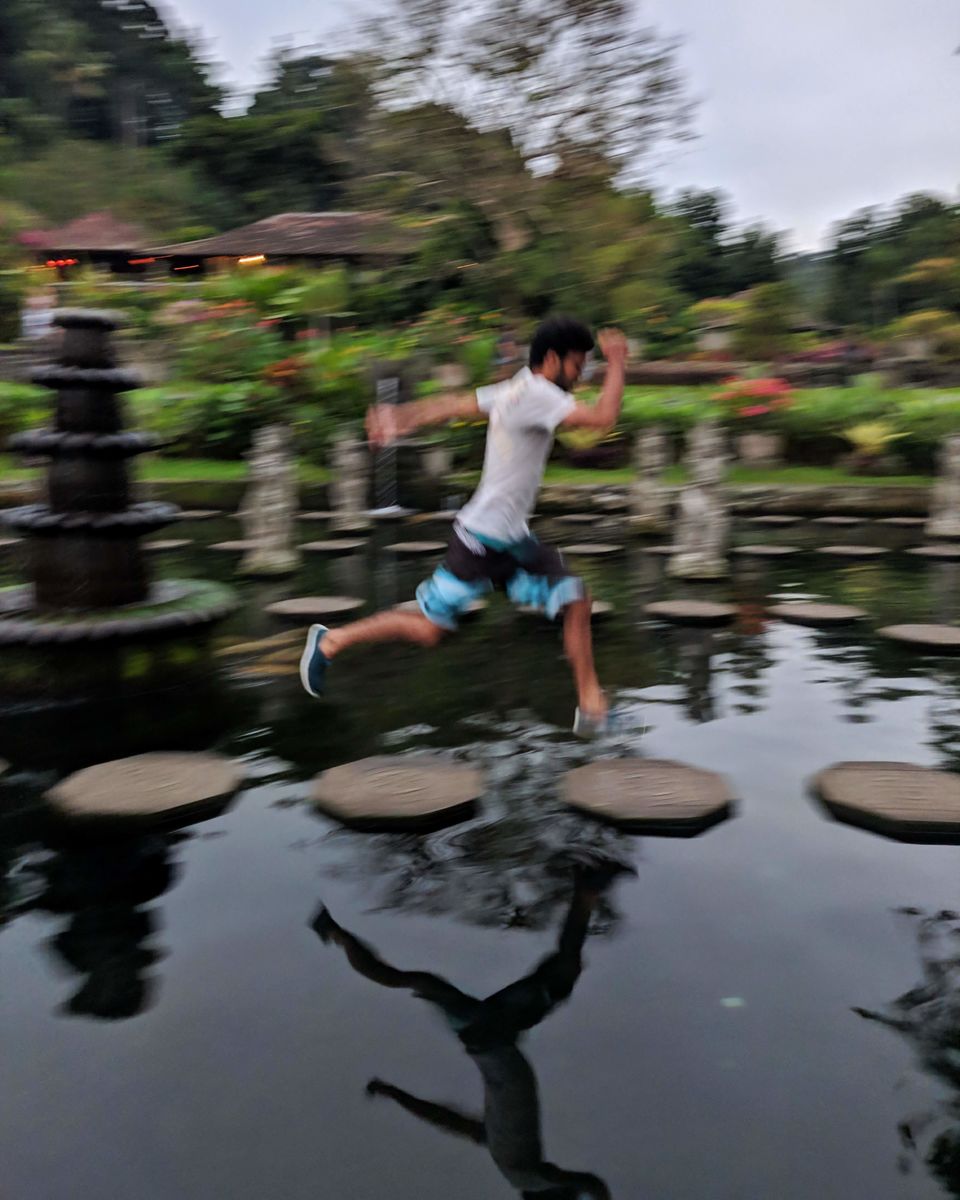 We managed this without fish food 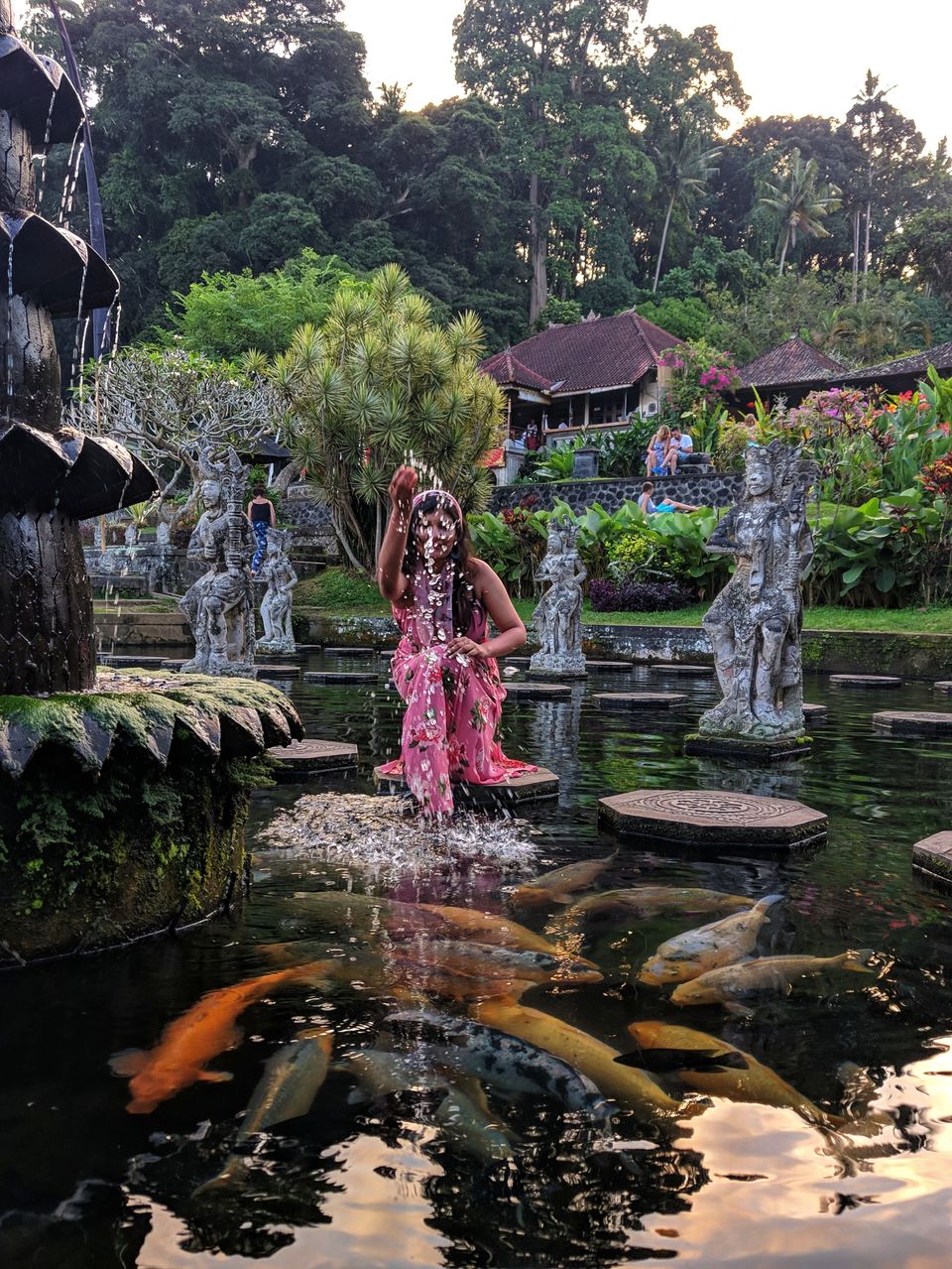 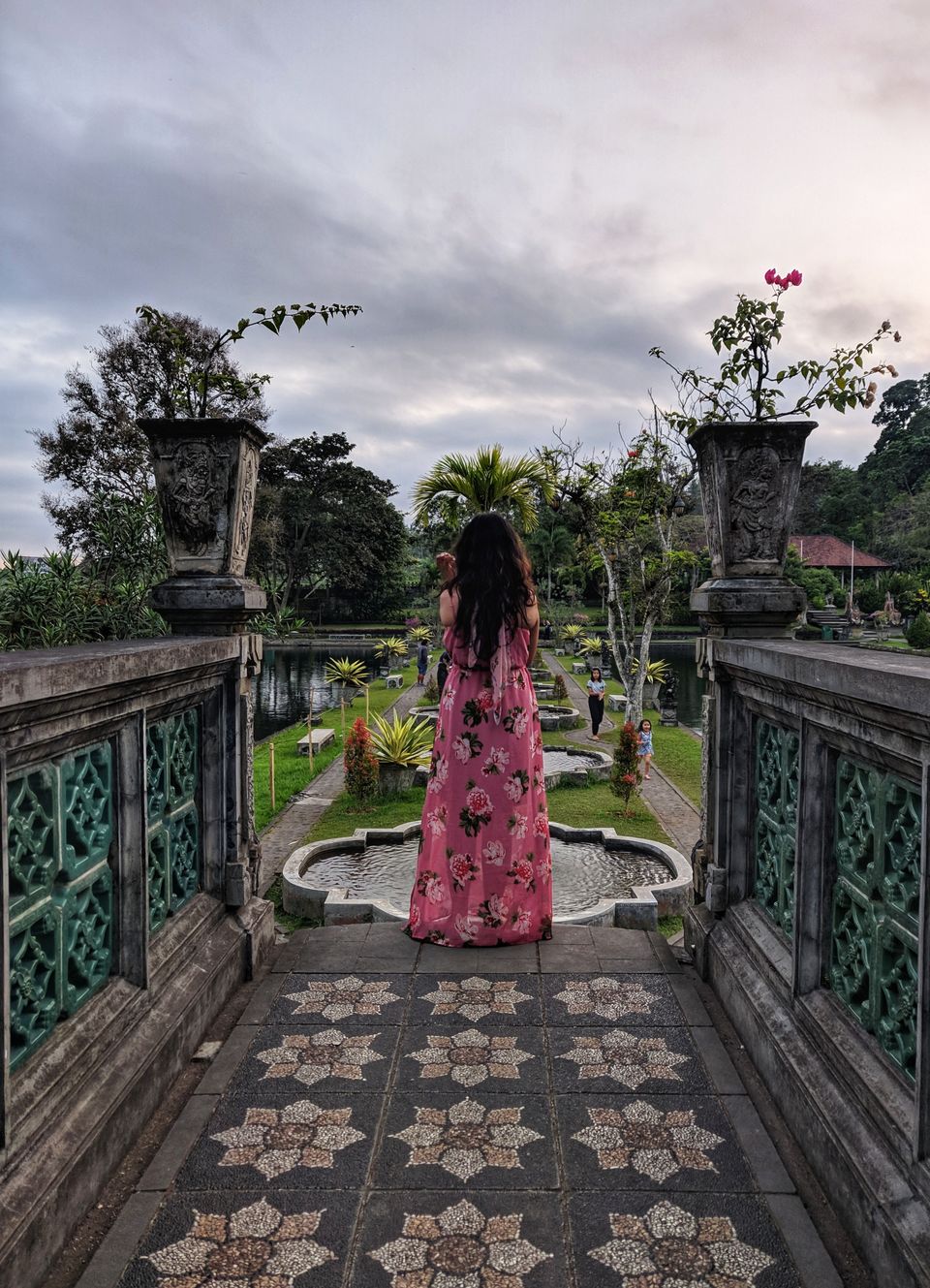 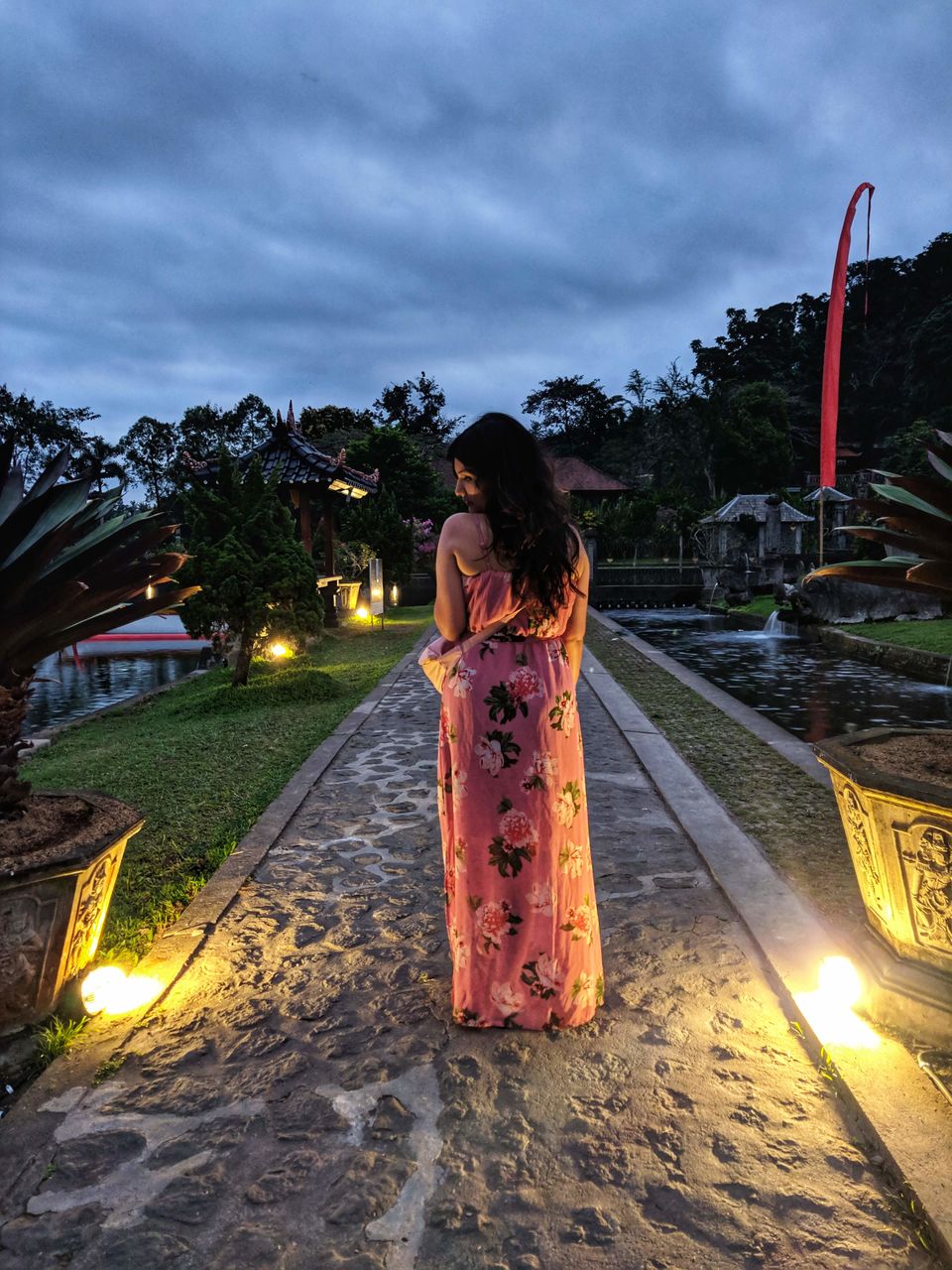 We left for our villa after breathing in the beauty of everything we had seen in the day. The villa we had chosen was in Candidasa as it was close to Padang Bai Port which was our next destination as Gili Trawangan was the place of interest. The villa itself was nothing short of epic for the price. The owner has paid careful detail to attention all the way from games in the living room to ice cold beer mugs in the fridge.