Going Backwards - Bairagarh and the return to Nainikhad

A storm was moving in. 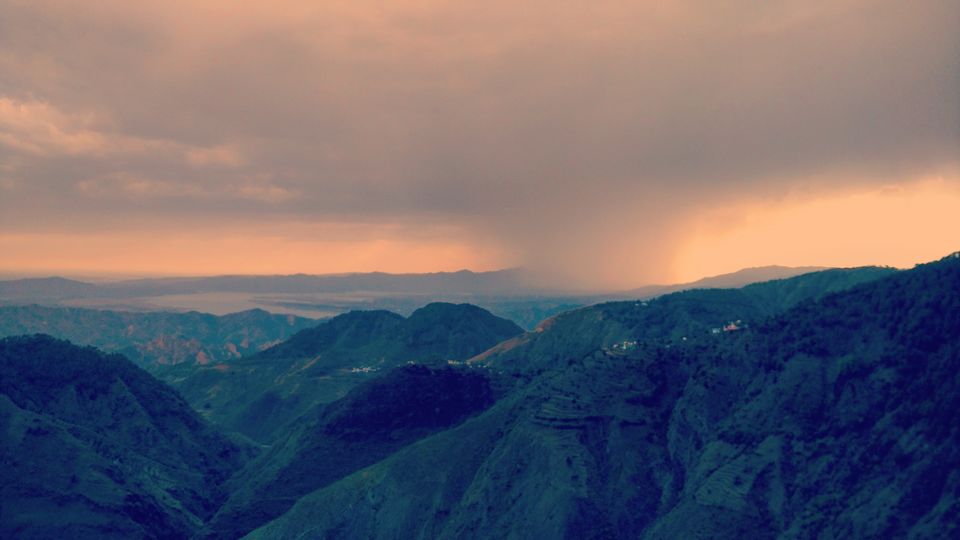 The two days spent in Bairagarh were simply superb. The accommodation was basic (and not particularly clean), the place was incredibly lazy (there was almost no activity in the village), the weather was biting cold, but it was fantastic nevertheless.

The ride to Satrundi was unreal. I rode through terrain unlike any I’d been on before. More experienced riders might consider this route a breeze, but I found it exciting and challenging. The six hours spent going to and from were anything but monotonous. I rode through a forest, over rocky paths, through water, under waterfalls and eventually into snow. The weather changed quickly too. When we went up it was clear and sunny, on the way down the rain was coming down in cloud-loads. Near-zero visibility only made things more challenging. It was adventurous, and it was worth it. 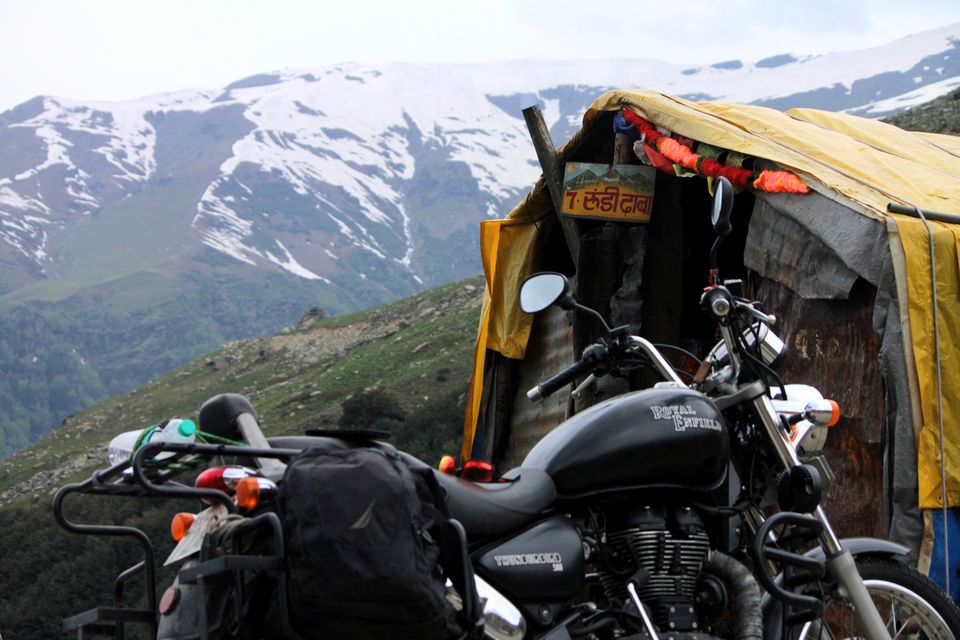 The PWD Guesthouse at Nainikhad 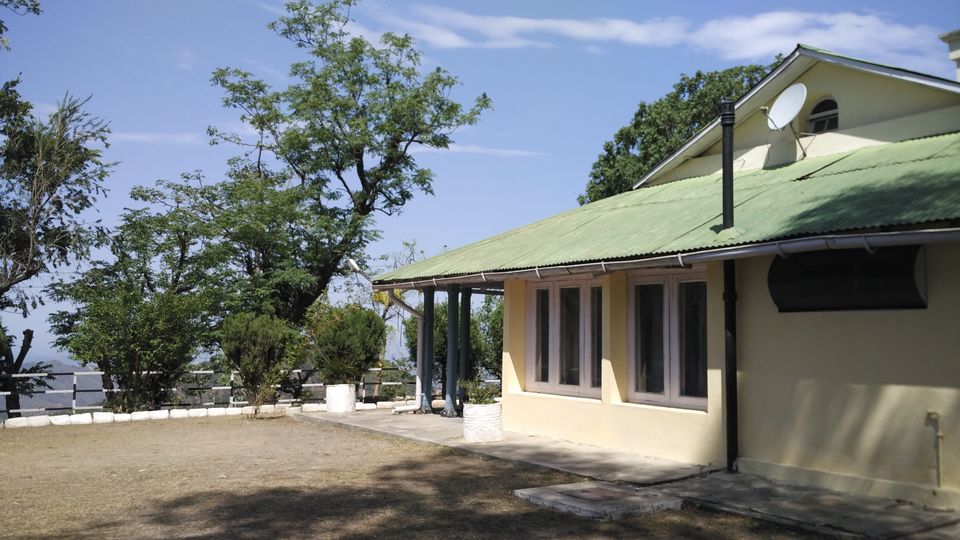 I saw and touched snow for the first time in my life. Given that I’ve lived my entire life in parts of India where the temperature seldom dips below 20 degrees celsius, I have been endlessly fascinated by snow. In Chennai, 25 degrees celsius is considered appropriate weather to pull out the sweaters and monkey-caps (thankfully, my family didn’t adhere to this standard). To be entirely honest, the first lump of snow that I saw (it really was nothing more than a lump) elicited a very unparliamentary reaction from me. I didn’t realise that snow could be dirty and ugly, or that it could clump up to look like, well, nothing in particular. But as I went higher, I eventually found the good stuff (real snow?). So the disappointment was only temporary, and the overall experience was memorable. 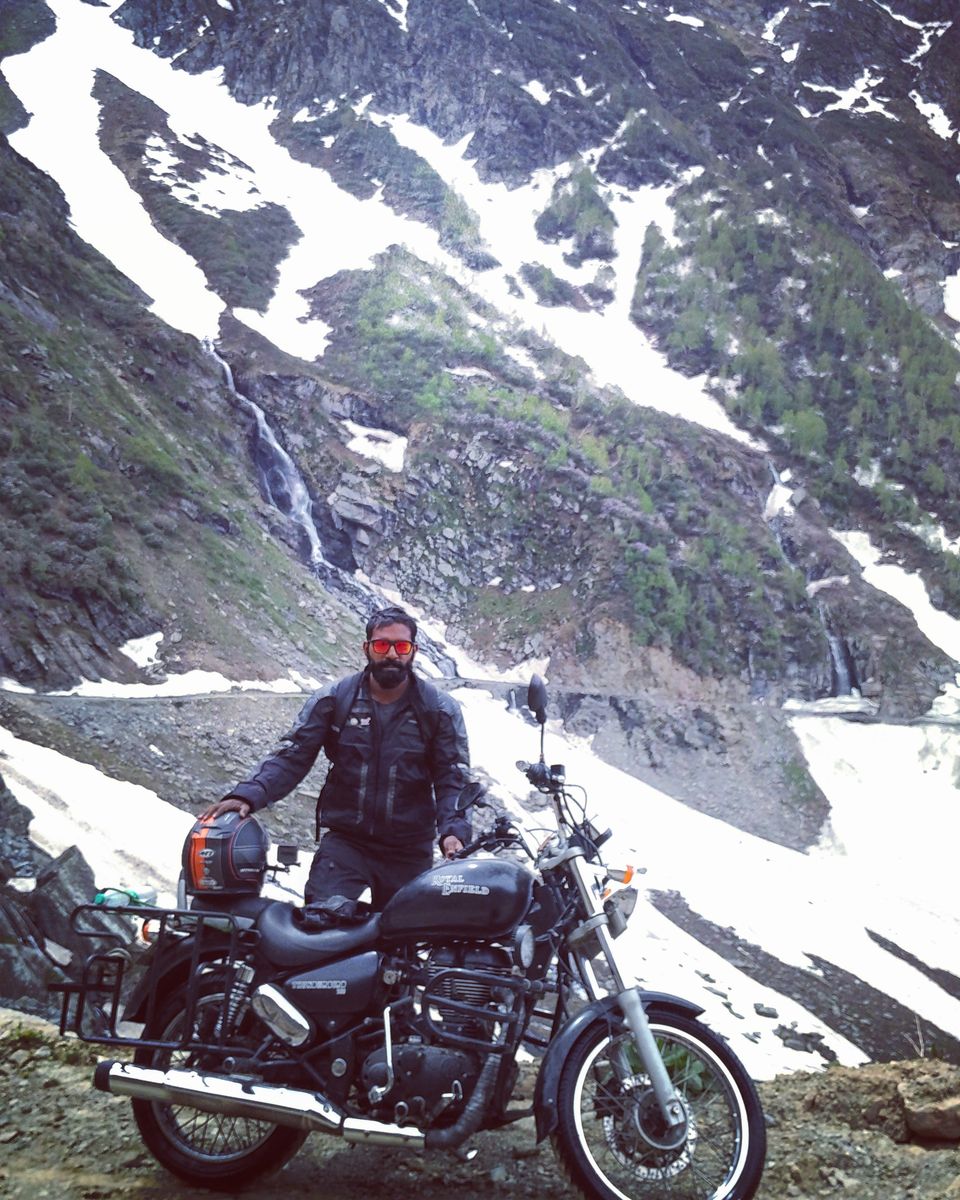 I spent several hours chilling on the balcony, trying to make the most of the sunshine (whenever it appeared). The majestic views of the mountains were addictive. I strolled through meadows, got shouted at by shepherds for scaring their sheep (even though I did absolutely nothing to scare them) and even spent some time washing a bus (because it was being washed in the middle of the road and there was no way past it). If you can’t beat them, join them, right? 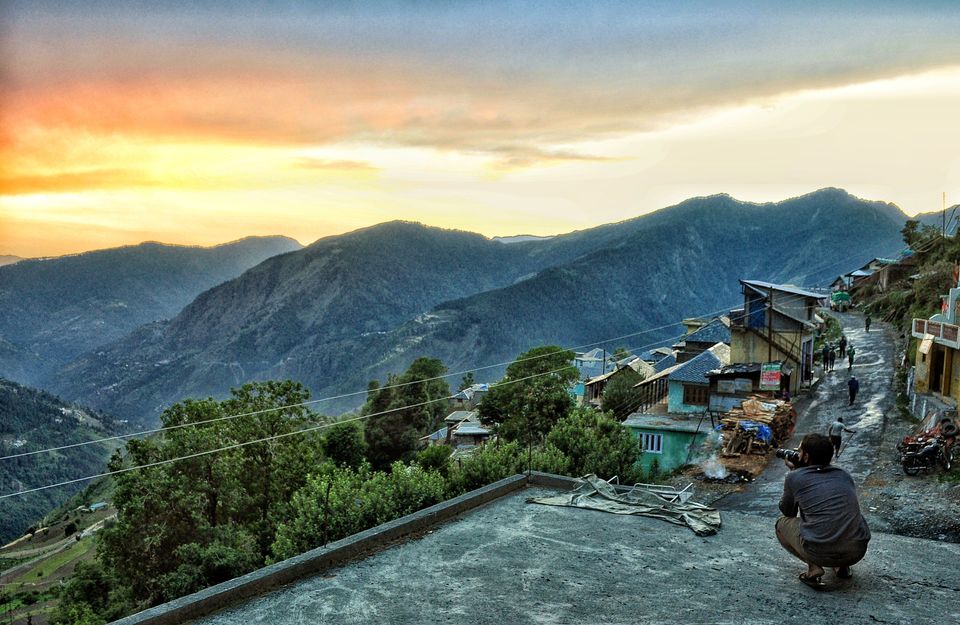 It was unlike any other place I’d been to, and I think that’s what made it enjoyable.

Bairagarh didn’t want us to leave. It rained heavily all morning on the day of deprture. The rain let up only at around 11 am. This was going to be a late start even by the standards that we had settled into for this ride.

The rain was coming down pretty hard. 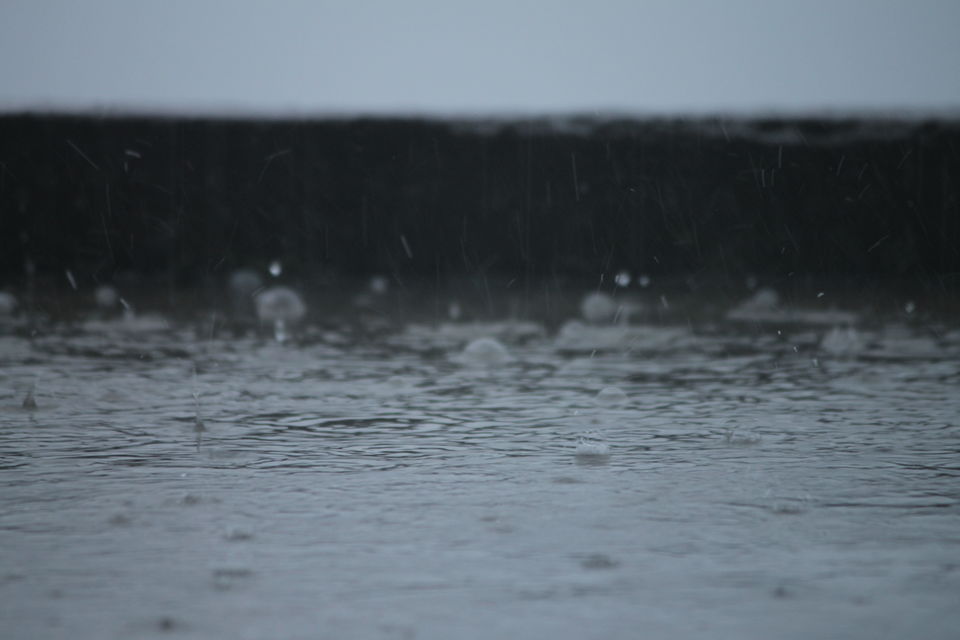 We had asked around for an alternate route into Kishtwar (in Kashmir), hoping that we would be able to avoid riding all the way back to Banikhet. The locals weren’t too familiar with the routes but offered us all the information that they could. Nothing was certain, but I gathered that we had to keep riding back on the route that we had come, until we found a dam (before the dam that we crossed on our way up), which they speculated would go join the road to Kishtwar after the point where it was blocked by snow. If this route did in fact work, we would be able to cut across into Kashmir without having to go all the way back.

We set-off in search of this new dam. Progress was slow because it was raining quite a bit. The copious amounts of cow dung on the road didn’t help matters. I forgot to mention this while I was writing about our ride to Bairagarh, but the road is used more by cows and buffaloes than vehicles (not really, but there actually are thousands and thousand of them on the road). As a result, you often find the road is entirely coated with, well, shit, and you can’t really tell whether there is tarmac beneath it. If you go fast, you’re likely to end up looking and smelling like the road. So, there is no choice but to go slow, and hope that the spray is minimal.

After several hours of riding, we finally managed to find the dam that we were looking for. There was a CISF checkpost at the dam manned by a ridiculously difficult officer. His approach to things seemed to be fairly simple. Refuse everyone entry so that he could never be held responsible for anything going wrong. The chap first told us there was no road on the other side. We told him we knew there was one. Then he said that it is a busy road and will take a long time to ride through it. We said we didn’t care. Then he said that a bus fell off some days ago and so it wasn’t safe. We told him that we still wanted to go. Eventually, he walked into his room and sat behind his chair to think things over for a while. He eventually came back and said that he wouldn’t let us through because he had decided so. It was the strangest thing ever, but we realised that there wasn’t much that could be done to make this gentleman comprehend anything. What the moron refused to realise is that because go his idiocy we would need to ride 2 whole days more to get to Kishtwar (going all the way around).

Rather than allow this to ruin our day, we decided to just laugh it off and get back to riding. We had to cover another 90 kilometres through stormy weather, back across the Chamera dam, and retrace our steps all the way to Banikhet. We were certain we didn’t want to stay there for the night (after the dreadful experience we had over there a few days before), so we continued riding towards Pathankot.

About 20 kilometres out of Banikhet, we stopped at a small shop for tea. A helpful gentleman there told us about a PWD guesthouse at Nainikhad, just a few kilometres down the highway. He told us that there were very few places to stay on the route, and the next feasible option would be several kilometres away. It wasn’t very late in the evening, but the sky was growing dark and it looked like another storm was coming our way. So we decided to call it a day if the guesthouse turned out to be decent.

We rode a few kilometres further and found the PWD Guesthouse. We would have never known of it’s existence, if we hadn’t been told about it. It’s tucked away just a few metres away from the highway, but it is really well hidden. The property itself is really beautiful. It’s a large and old bungalow, located a little higher than the areas around it and with panoramic views of the open spaces around. A pleasant change from the run-down setup that was home the night before. It took us a while to find the caretaker, but we eventually did and got ourselves a neat and comfy room for the night. The clothes line was strung up, all the gear was washed and hung to dry, and the bikes were washed (in the dark) to remove all the cow dung that had found its way on despite all our efforts to avoid it. Dinner was served in the spacious and large dining room. A simple meal of dal and rice (which we were subsequently charged an absurd amount for). It was time to call it a night. I remember looking forward to riding into Punjab the next day. It had been a while since we rode into a new state.