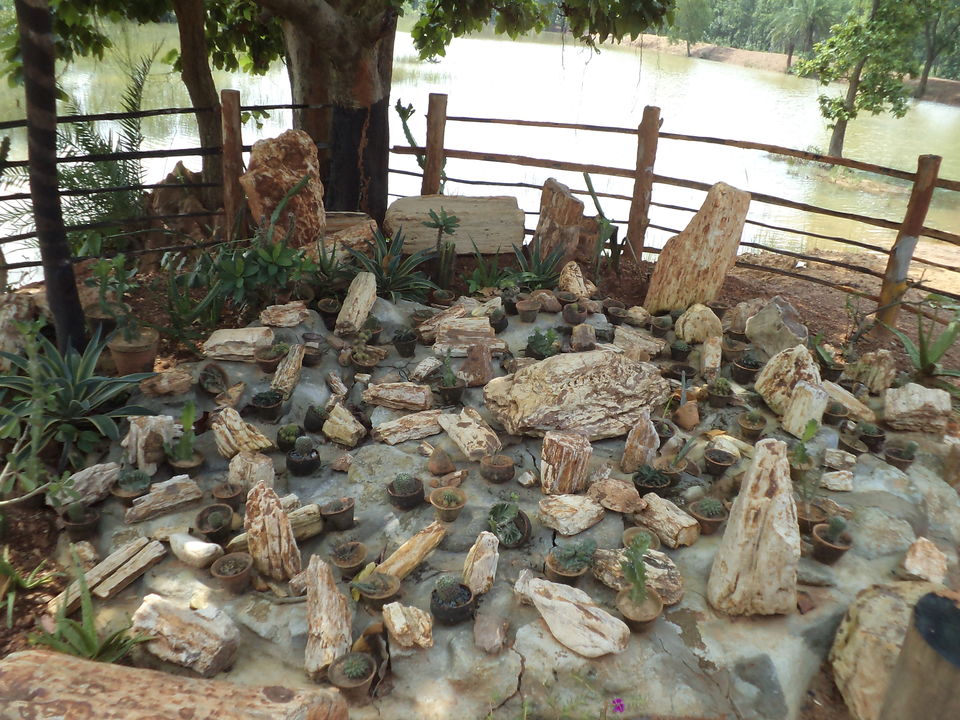 Shantiniketan is a popular weekend gateway from Kolkata and I have been there on several occasions just like any other people. On one such occasion , while on a trip to Shantiniketan , we three friends decided to venture out to the nearby village of Amkhoi which boasts of a rare fossil park. There are few fossil parks in India like the Ghughua Fossil Park, Mandla Fossil Park, Shivalik Fossil Park and Tiruvakkarai Fossil Park. West Bengal also boasts of Amkhoi Fossil Park nestled among the Ilambazar forest in Birbhum District of West Bengal.

We hired a battery operated auto rickshaw , locally called toto from Shantiniketan and started our journey towards Ilambazar . At a juncture called Dhalla on the national highway we took a left turn and found our way through the mud road amidst a thick forest consisting of trees like Sal , Piasal , Sissoo , Eucalyptus , Akashmoni , Neem ,etc. We went past a checkpost and in no time reached our destination – the Amkhoi Fossil Park.

We were amazed to see large chunks of fossilised tree trunks scattered all over the park which was red in colour due to the local soil. The park is still currently under development and the major effort was taken by the local villagers themselves. Small cemented platforms were raised where large fossilised samples were exhibited. At some places , the smaller pieces of fossils were decorated and placed in an orderly manner for people to see. The local people were taking turns to guard their natural treasure and helping any visitor with their queries. There was a huge water body in the middle. Even in the middle of the waterbody, we found large chunks of tree fossils.

The first fossil park of the state has been set up near Ilambazar in Birbhum district. The forest division is gradually building up this fossil park centring around a million years old fossilised forest land comprising of villages like Amkhoi and Jamboni and expanding over a area of about 10 Hectares. Around 10 self help groups are in charge of taking care of this fossil park which mainly comprises of the local villagers. For years , this forest lands had been robbed of its treasured fossils by fossil hunters and antique thieves . They used to easily collect these valuable fossils and sell them online fetching millions of dollars. Until one day , the locals realised their value and took the onus on themselves to save their own land.

The local women have set up a cafeteria and sales centre .A museum is also under construction. Recently in an administrative meeting in Bolpur in May , 2017 which was chaired by chief minister Mamata Banerjee, several plans had been taken to develop the Amkhoi Fossil Park into a eco tourism project. The steps undertaken were :

Re excavation of Ponds to unearth more fossils

Beautification of the Fossil Park

Development of Picnic Spot within the fossil park

Amkhoi was a small undescript village within the Ilambazar Forest. Until one day while excavating a pond , something was discovered. The local tribal people informed the forest officer. Geologists came from Shantiniketan to examine the area. A million years old fossilised forest land was thus discovered. It was a casket of geological treasure for the experts. Earlier fossil remnants were discovered from Ausgram in Burdwan, Sonamukhi in Bankura, Garhbeta in Midnapore and the bank of Murabala river in Mayurbhanj, Odisha. But such a large stretch of fossilised area like Amkhoi was beyond imagination.

Large chunks of fossilised tree trunks were discovered one after the other during pond excavation. The geologists sent the samples to Birbal Sahani Institute in Lucknow. The experts after examination suggested that the fossils were around 15 million years old.

The angiosperm wood fossils which are displayed here were collected during pond digging from Amkhoi village of Illambazar Forest, Birbhum District. These specimens are definite proof of the presence of a vast dry deciduous forest with a few evergreen elements in this area, which prevailed 15 to 20 million years before present (Late Miocene). Wood fossils can also be found in different places of Birbhum, Bardhaman, Bankura and Medinipur Districts of West Bengal as well as in Mayurbhanj District in Orissa.

Few families and genera of the past forest of south West Bengal were identified by scientists. Dipterocarpacea, Anacardiacea, Combretacea and Leguminosae are some of these. At the present time these families occur in this area. However, some genera are extinct here, but occur in the present day forests of Western Ghats, Myanmar and Malaysia.

This past forest thrived in the uplands of Rajmahal Hills and Chota Nagpur Plateau at the North West of Birbhum. It is presumed that the trees were carried by occasional floods of the river system flowing from North West of the river basin towards South East in Birbhum, Bardhaman, Bankura and Medinipur Districts and deposited under find sand and clay gradually to transform into wood fossils. The petrified woods are found in two different laterite beds. This is a pioneering effort of West Bengal Forest Department in preserving the priceless fossils woods and to educate people about the natural heritage of West Bengal.

It was a unique experience for us. We enjoyed our small discovery and returned back to Shantiniketan by evening. 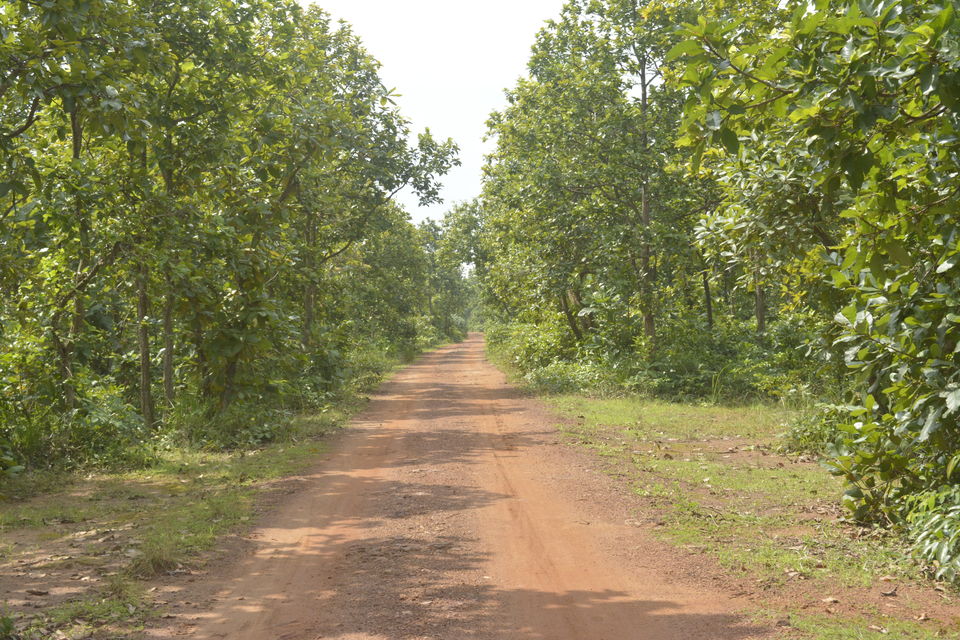 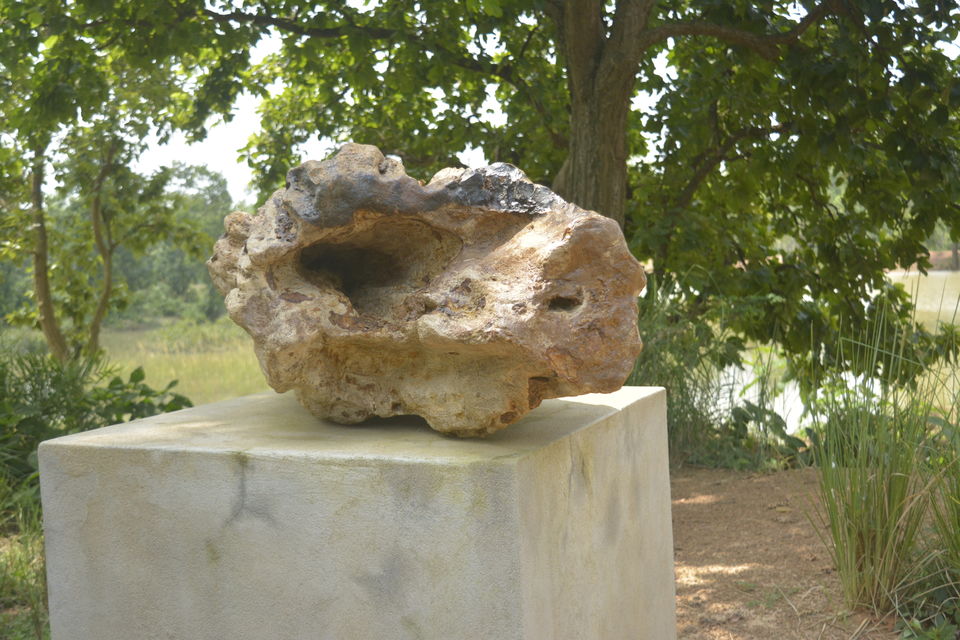 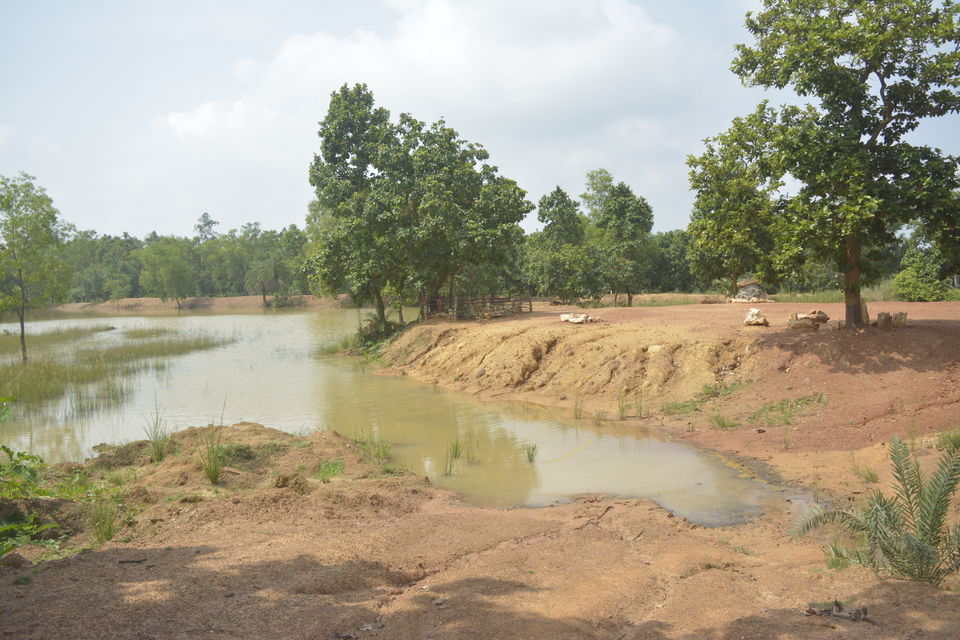 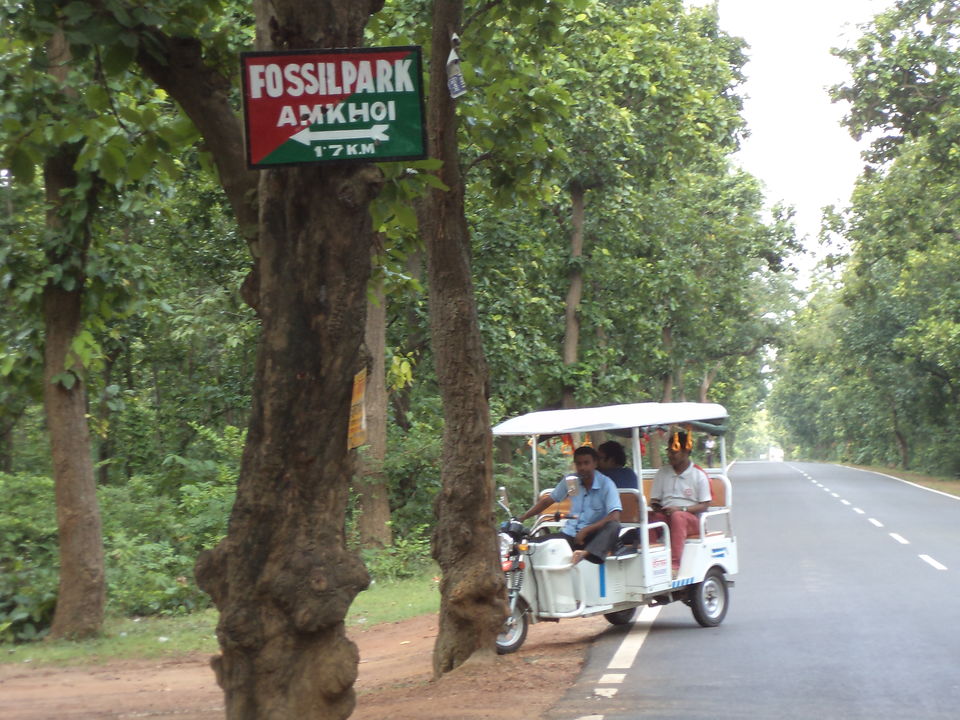 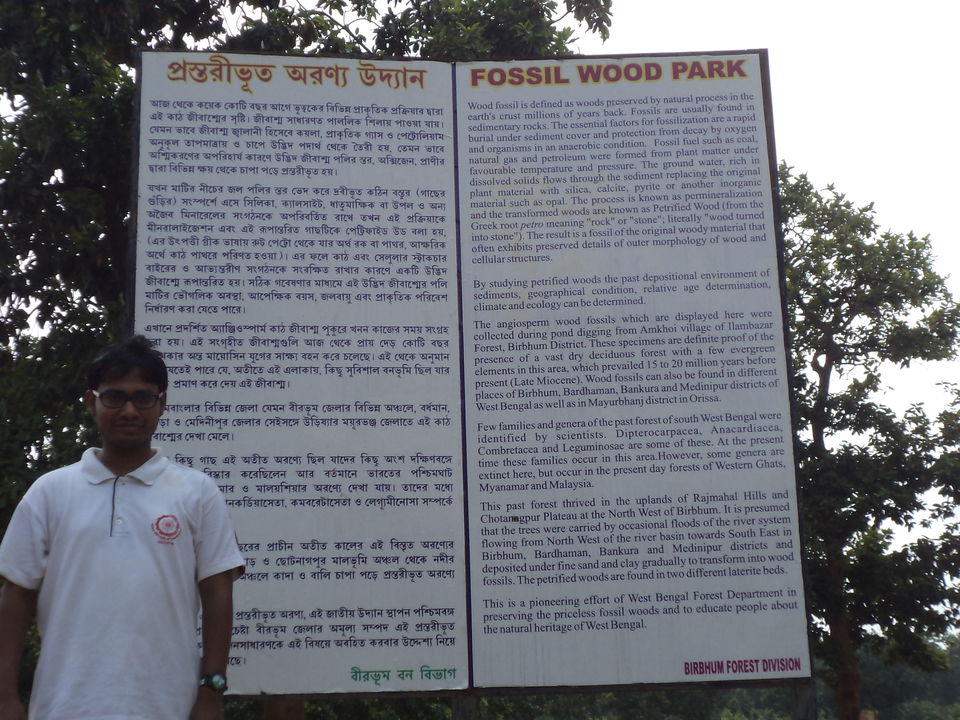 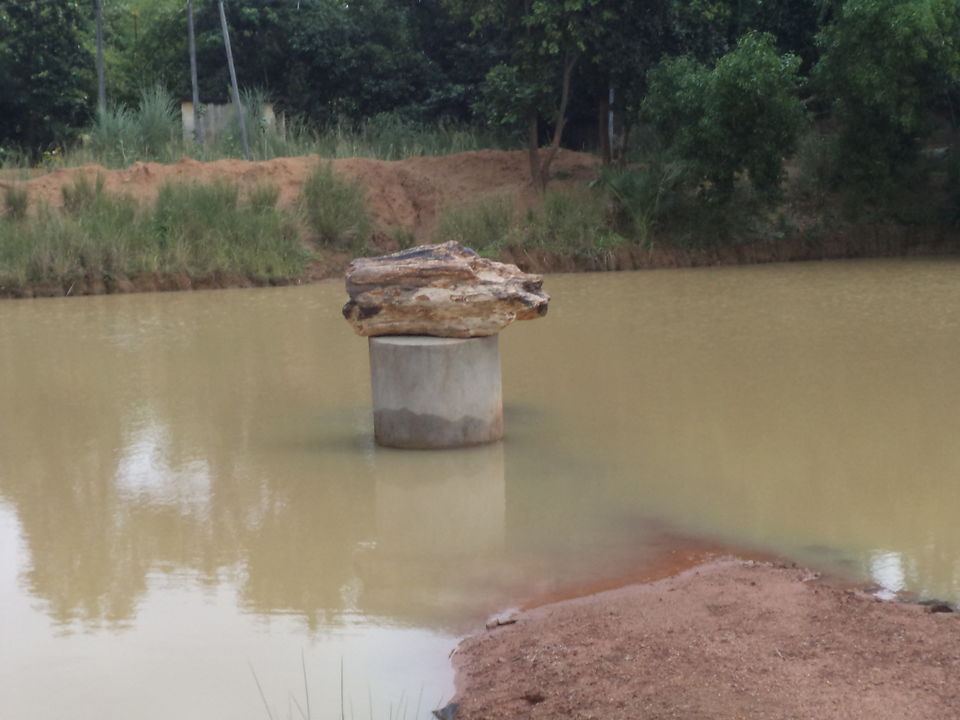 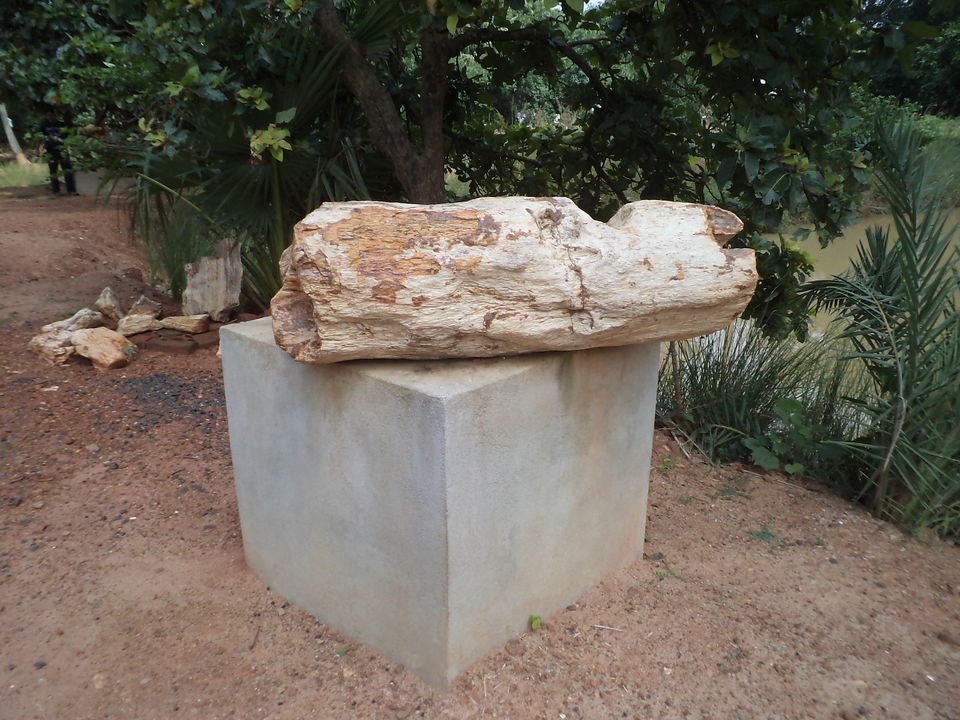 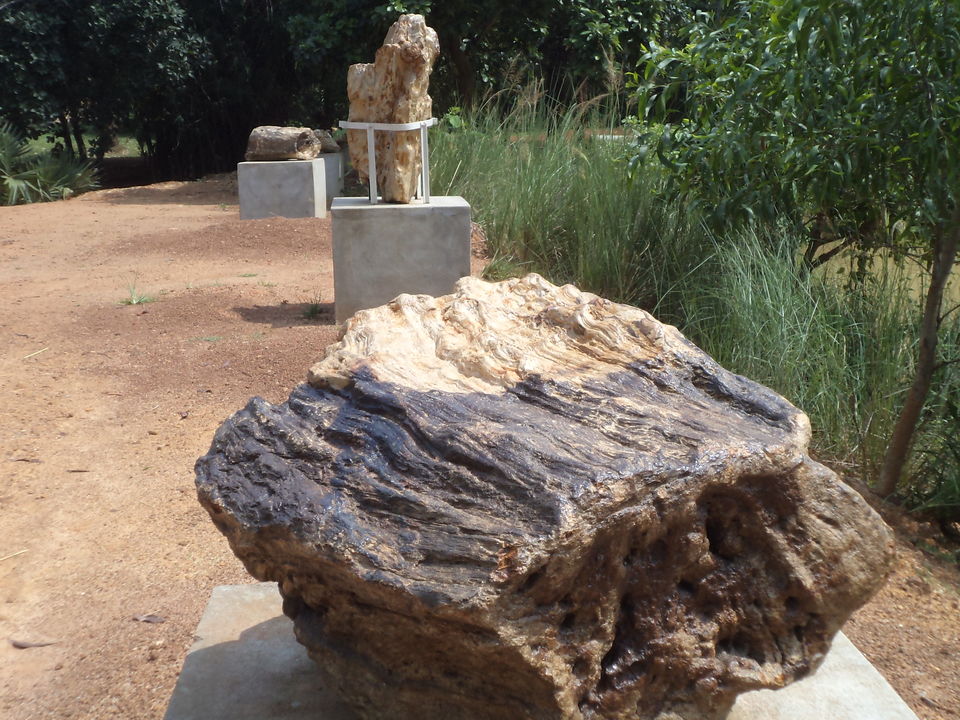 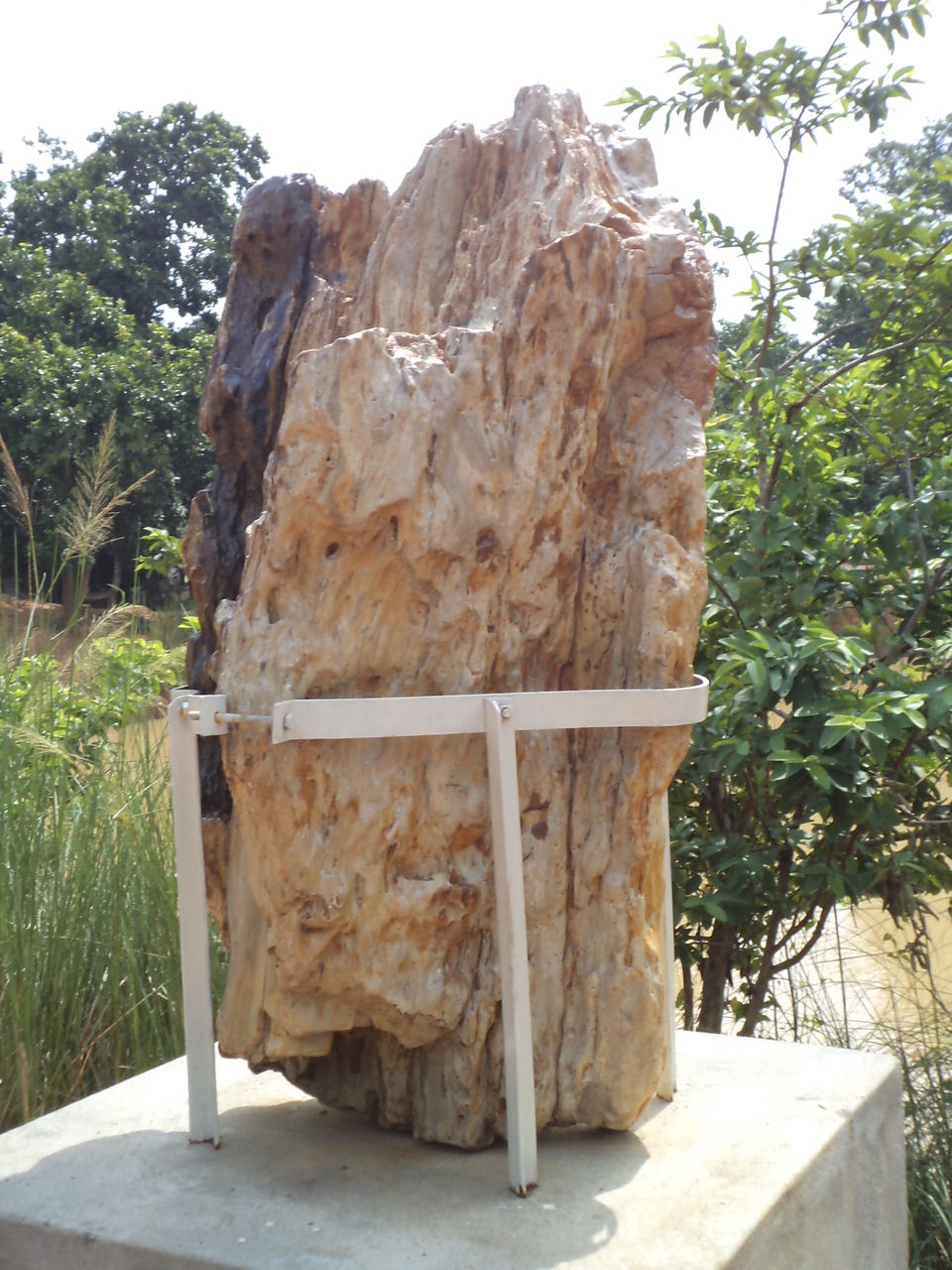 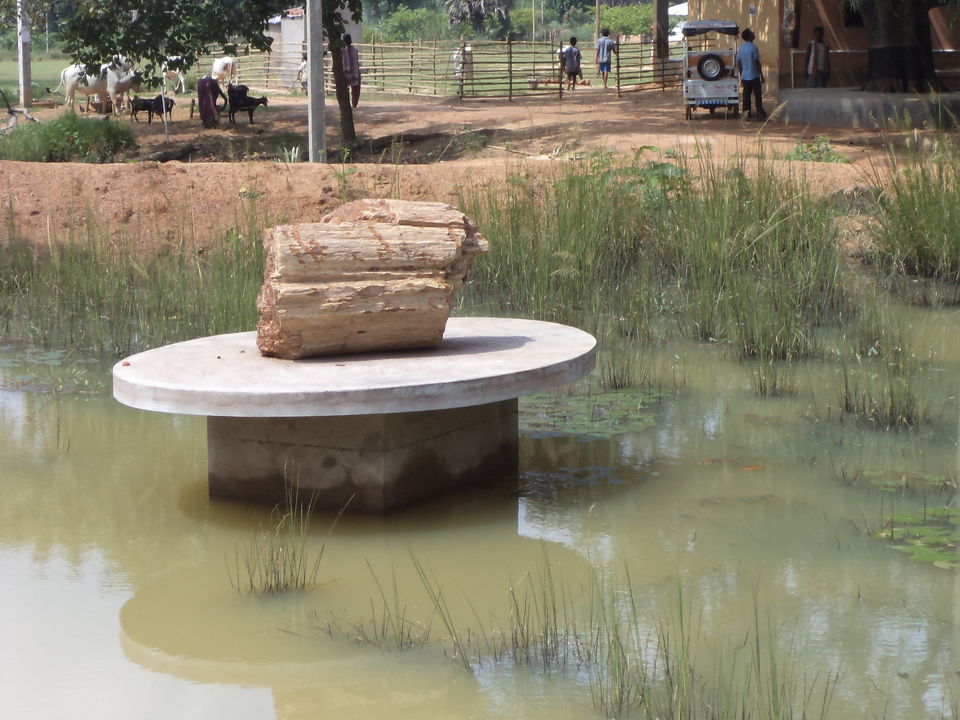 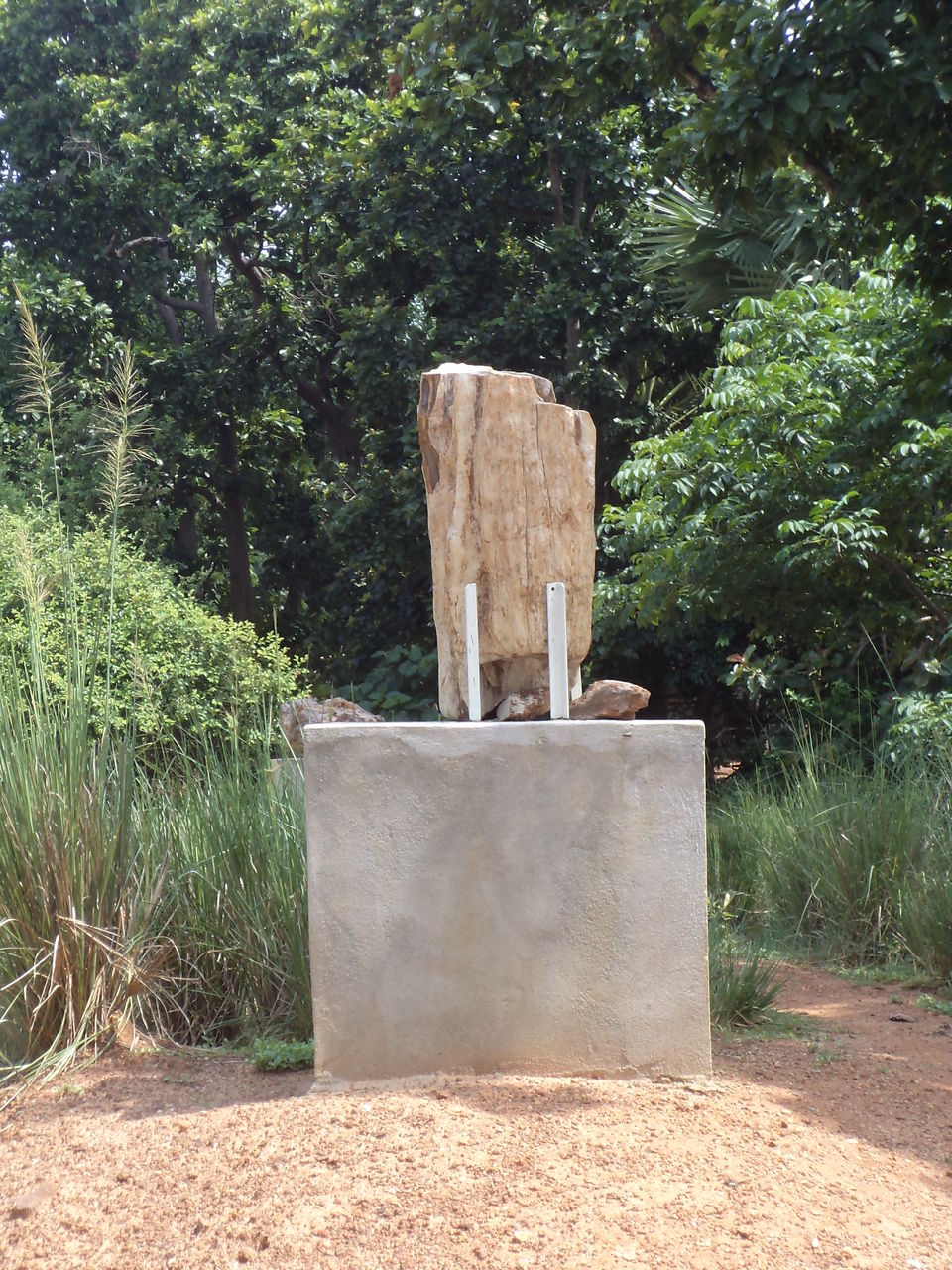 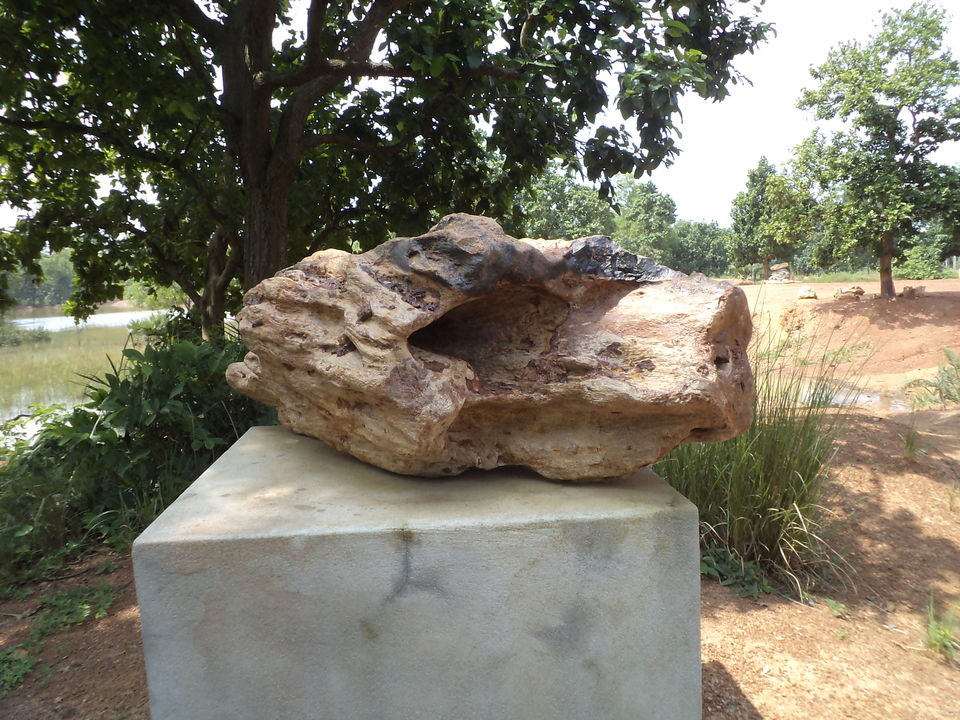 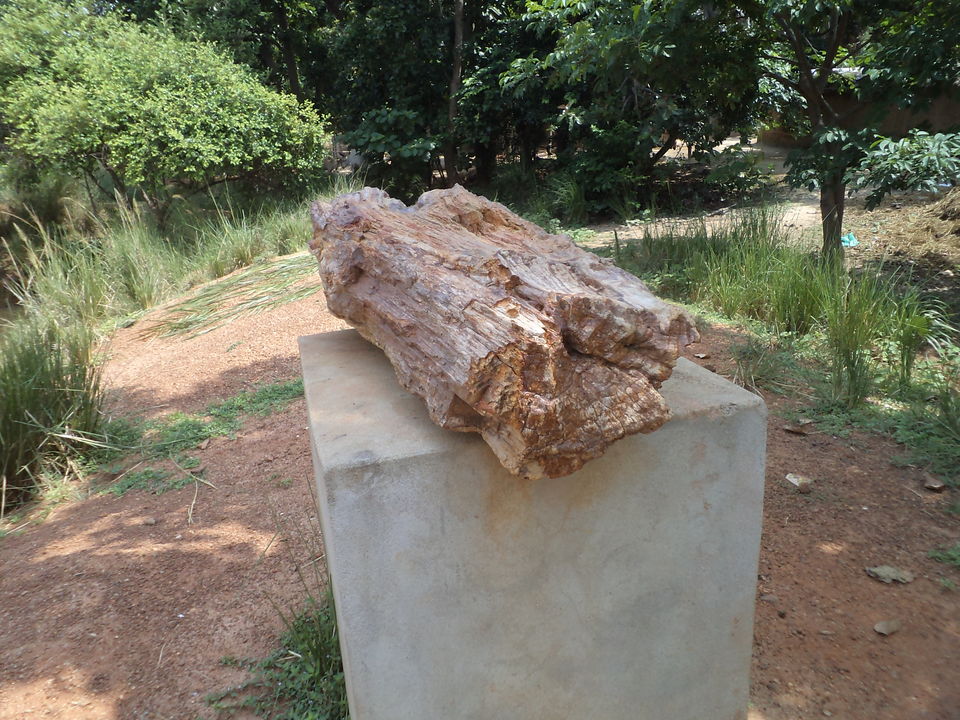 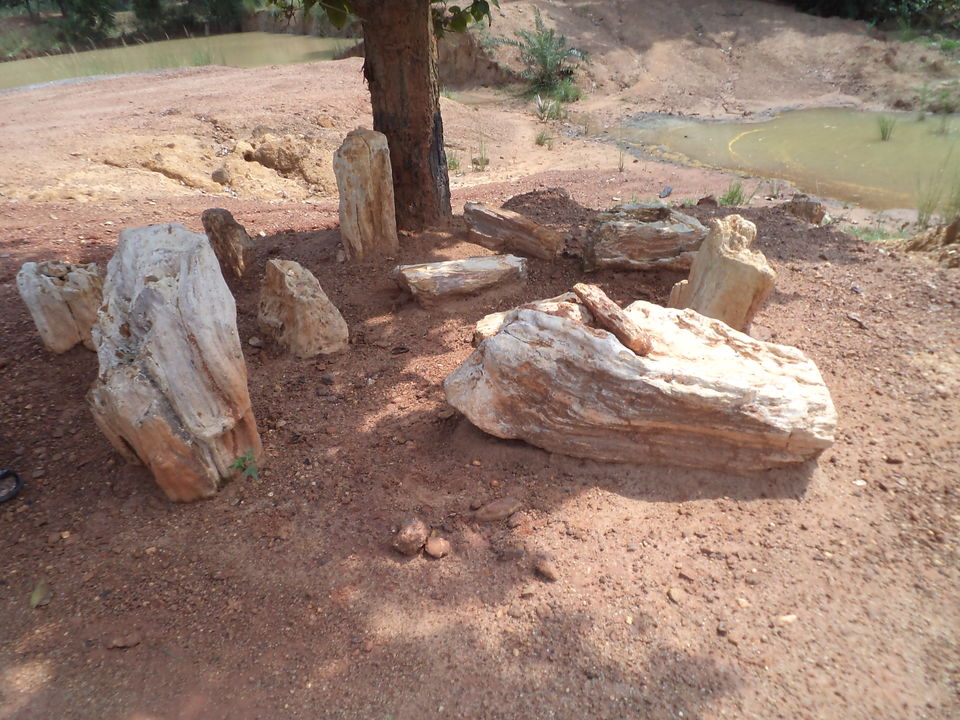