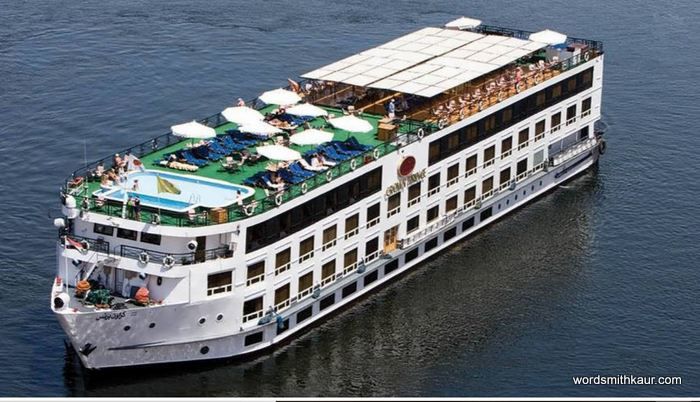 The cruise aboard the Crown Prince on our Egypt Nile River Cruise was a surreal experience for me as it was my first ever. Travel is always great with friends, sharing adventures mean enjoying them 100% more. Let me remind you that the average age group of 18 of us ladies travelling together is 50. Now, after our trips together, I feel we are more than friends. We are like a big travel gang actually!

We landed in Cairo on22nd Jan 2019 and the next morning we flew to Aswan. There are almost 500 cruise ships sailing on the mighty Nile which is the longest river in the world.We boarded The Crown Prince to make our journey up North while exploring Aswan, Abu Simbel, Edfu and Luxor before flying back to Cairo. The Crown Prince is a remarkable and extravagant ship offering Five-star deluxe comfort and facilities in a modern and self-contained cruise vessel. It glided over the Nile and was very relaxing and exciting at the same time. I like to collect moments not things and it was a cruise to remember with memorable moments.

About the Cruise Ship

Split over five-decks, the Crown Prince conjures the perfect magic. For those who just want to relax, top-up your tan on the Sun deck that extends for the entire upper level by the poolside or enjoy the nightly music performances in the lounge.

The Crown Prince Cruise Cabins are spacious and there are 80 cabins in all, spread over four of the five decks of the ship. The cabins have windows with panoramic view to watch the serene and shining waters of the Nile glide by. In the day we went to explore the ancient monuments and evening we relaxed on the deck and watched the glorious sunset. I wish we could have something similar on the River Krishna; stopping at places en route with onboard entertainment by traditional performers and a guide explaining all the history and culture for the tourists while they explore the culturally rich Krishna areas. Mr Chief Minister, are you listening?

It was an all-inclusive package deal with beautiful surroundings and an extensive trips in between. The romance of the sights and scenery of the Nile and Upper Egypt with a delightful guide like Shery made the cruise more than memorable for us. Egypt is not just the Pyramids of Giza, it has much more to explore and stand in awe of. You can explore Egypt without the cruise but I would recommend that you take the cruise and enjoy the ambience.

Later on, after dinner, we moved to the bar and lounge for some entertainment and fun. We dolled up one night in long dresses; wore our dancing shoes in the evenings. One night we had a belly dancer perform for us; she was a nubile girl who still needs to learn belly dancing. We also had a dance performance called Whirling Dervish by a young man and it was a totally unique one. It is an entertaining performance that you will not want to miss. This dance, which is called the ' sema` is a rare manifestation of religious ceremony transcending into performing art. This dance has been performed for over 700 years by the Sufi, a rather mystic order of the Islamic faith. Sufi, which means awareness in life, awareness on a higher plane than on which we normally live.

The Persian word dervish (literally: the sill of the door) describes the Sufi who is the one who is at the door to enlightenment. But most of the more colourful performances in Egypt are not pure Sufi but are just entertainers.

Whether the performance is by a true Sufi, or simply a performing artist, it is nonetheless entertaining, and even marvellous. The performer "turns" or whirls endlessly while working skirts in a colourful display and the focus and training is obvious. Our dervish had lights on his skirt and it was a mesmerizing sight indeed. I love to take pictures while travelling as I feel we take photos as a return ticket to a moment otherwise gone.

While my roomie, Bindiya and I were relaxing we could hear loud voices from the opposite cabin. I got up to explore and I am glad I did as I came to know the "real" meaning of window shopping! The dictionary says "the activity of spending time looking at the goods on sale in shop windows without intending to buy any of them" is what it means. But I now know what it actually means! Women can shop anywhere; and I literally mean anywhere. We were cruising along the Nile and there were these vendors on a speed boat alongside selling stuff. Our cabins had small windows( this was the "window shopping" I was talking about) that opened inwards and through that the bargaining and brisk selling of merchandise continued. In a couple of hours the vendor was a happy man having sold all his goods. But it was great fun, a new experience, a tale to tell our grandchildren. All the girls almost ransacked the tiny jewellery shop on board while shopping for souvenirs.

While sailing on the Nile, we had to sail under a bridge to sail further but the bridge was quite low. We watched in absolute fascination as the water in the channel of the ship was drained out and the ship went lower and could sail under the bridge without difficulty.

On my trip to Egypt I learnt that one of the splendid treasure that remains are the people, and the hand made products they produce. On our itinerary was quite a lot of shopping actually. There are many varieties of hand made products, comprising such items as alabaster artefacts, painted papyrus, and perfume among others. But we also learnt quite a bit from our visits to the Alabaster Factory, Perfumery and the Papyrus making industry.

The Alabaster Artisans were a laugh riot and had us in splits with their team performance. Listen to the video and you will know what I am laughing about.

The perfumery for me personally was a strain as I am allergic to scents. Most of my friends came back with dainty glass vials to take home. The salesman explained the powers of seduction through a particular perfume and the uses of the others too.

Papyrus is a grass like water plant found in the Nile region of Egypt,. The ancient used to make paper. The middle part of the stem was used to make paper. The outer layer of the stem was removed. The inner layer of the plant was cut into long strips and placed side by side with a second layer on top at a right angle. Then the complete item was soaked in water and pressed under a heavy rock for 21 days. The juice of the plant acted like gum and glued the strips together. The outcome was a sheet, which was beaten flat and dried in the sun. Egyptians used papyrus for 4000 years until other plants and trees were used to make paper. Papyrus is still made, but generally only as a tourist attraction.

These are the places we visited while cruising down the Nile. Next blog will cover them all.

Valley of the Kings

Spacious 80 Cabins with all Meals Included

Do check out my blogs on Tips for Visiting Egypt, Food in Egypt, The Pyramids of Giza.