These days, Port Barton is not for those seeking luxury, but rather for travelers who revel in exploring remote, rural villages. The town isn’t as well developed as other destinations of Palawan, and electricity runs on a limited basis, but the charm lies in its simplicity and slow paced lifestyle. It’s a bit of a hassle to get there and away, but the advantage is that there are no hordes of tourists to deal with. I personally enjoyed our stay here, and thought it was well worth the effort and cost it took to get there and out; I liked that we didn’t have to share the palm-fringed beach with hundreds of other tourists. It felt like my own private paradise. The glassy bay mirrored the sky and the bangkas, so the beach never looked the same whenever we caught a glimpse of it. The gentle sunrises and fiery sunsets were magnified, producing some of the most dramatic dawns and dusks I’ve ever had the fortune to see. The only flaw was that the bay was filled with giant jellyfish, so swimming is limited to certain roped off areas. The town of Port Barton is small, dusty and seemingly empty, until school lets out— then kids fill the streets with laughter. Bamboo huts are tucked into thickets of trees, far from the roads, but closer to the beach the houses are gaily painted concrete, bright shades of pink, blue and green. Pieces of cut up bamboo and rusted engine pieces litter each yard, and dogs wander around poking their snouts in everything. In truth, Port Barton has an abandoned air to it, which didn’t bother me, but it is unfortunate for the resort owners who have had to shut down their places of businesses, and for those who are currently struggling to keep theirs open. Even the bangka owners who have converted their fishing boats into tourist boats are now struggling to keep afloat. 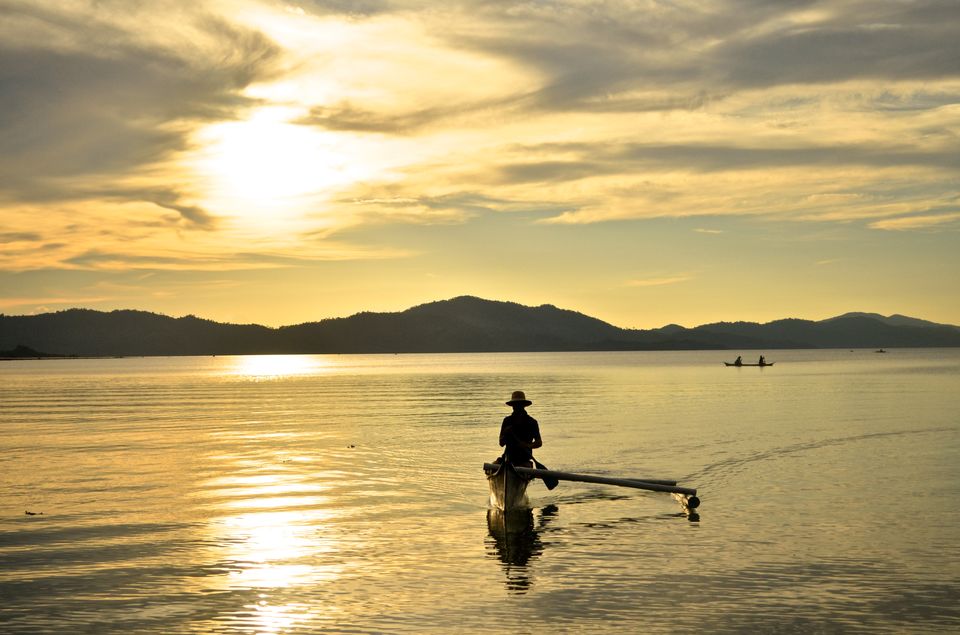 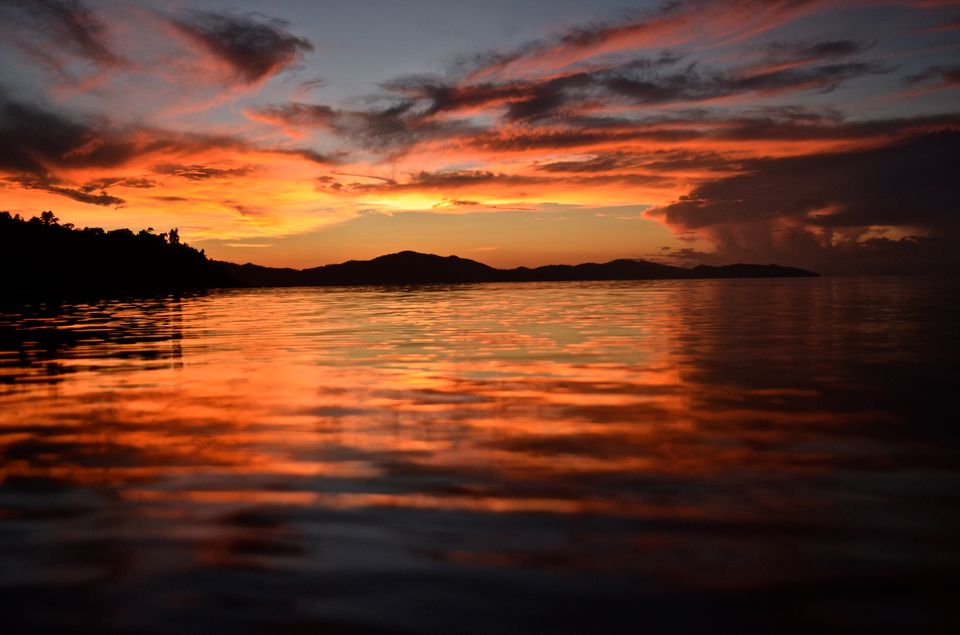 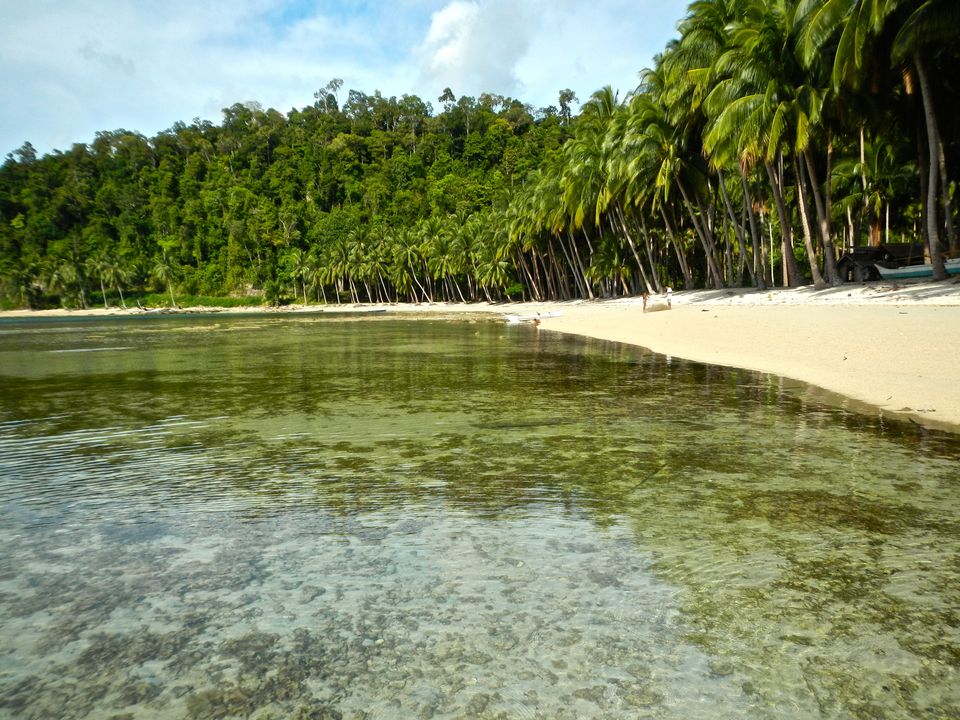 Though the Puerto Princesa Subterranean River National Park (PPSRNP) has a lot to offer visitors, most people make the trip from Puerto Princesa only to see the underground river, which is heavily celebrated as one of the new seven wonders of the natural world. Also part of UNESCO history, the river is now a huge source of pride to the Philippines. The subterranean river system is 8.2km long and has several large chambers, up to 120m wide and 60m high. It flows underground almost the entire length, and empties into the ocean, so the lower part of the river is brackish (a mix of fresh and salt water) and subject to tidal influence, which makes it a natural phenomenon. When the sun is shining, the brackish water is known to turn an eye-popping bright blue-green (more green than blue). The river isn’t the only attraction of the PPSRNP though, as the beach by the mouth of the cave features an impressive karst landscape, and the old-growth forest that fills the park is full of exotic flora and fauna. I nearly jumped out of my skin when I saw a handful of large monitor lizards crawling around, forked tongues darting about! Since the river was given the honor of being one of the new seven wonders of nature, there was a huge jump in the amount of daily visitors, so much that a cap has been put into law for preservation reasons, which allows only 900 tourists a day into the subterranean river… but that seems to be largely flexible depending on the clout and amount of pesos you hold. 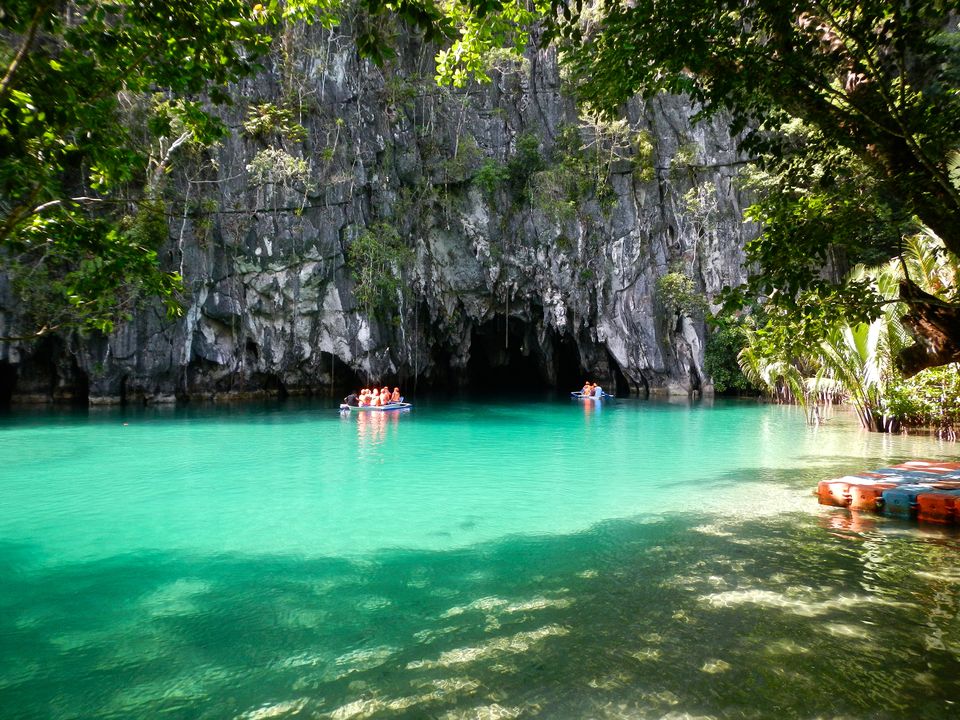 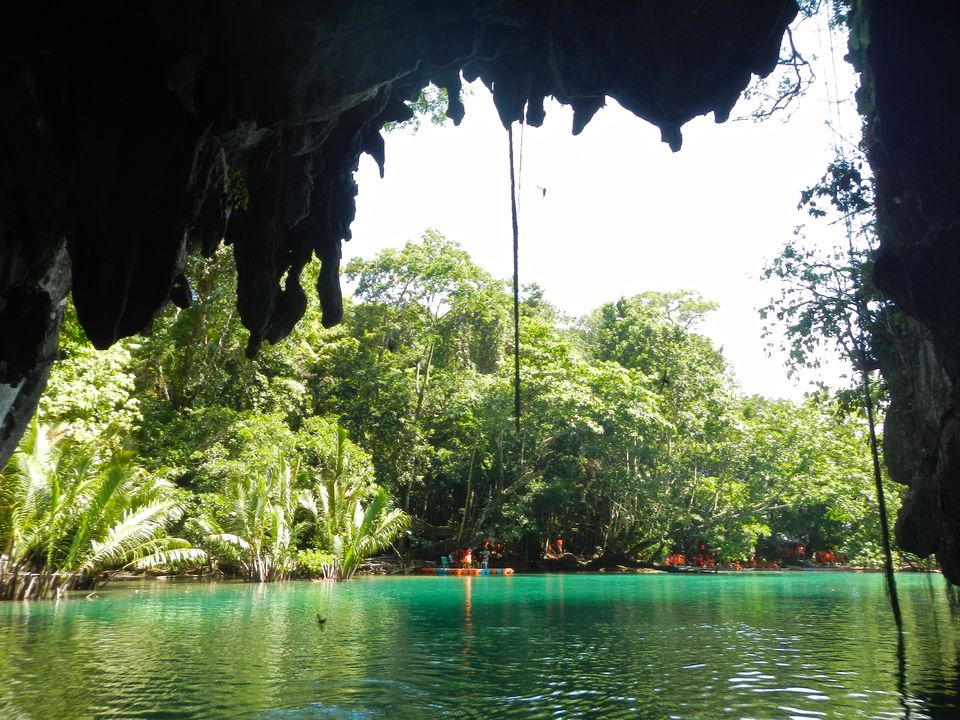 El Nido doesn’t have that beach-town vibe, feeling of idyll which accompanies the best beach towns. But, El Nido is chock full of luxuries many tourists appreciate on their vacations: cafes and restaurants, a wide range of hotels for every wallet, beach bars with happy hours and reggae music, fiery sunsets, stuff like that. Stores offer plenty of souvenirs, and even designer clothing stores for those looking to spend serious amounts. And that doesn’t include what is waiting just a boat’s ride away offshore… Sure, the island-hopping tours are on the pricey side—1200 to 1500 pesos per person (around 30 USD)—but there is no disputing the beauty of the Bacuit archipelago. The karst formations, the white-sand island beaches, the glowing blue-green lagoons, the colorful fields of coral, and the clear waters that turn into every shade of blue. Each and every destination is exactly what we all gape at on TV and in magazines. Pa-ra-dise. If the weather is just right, the tour fees will seem paltry in comparison to the natural phenomenons that abound. Furthermore, there’s a handful of other things to do around El Nido, besides the island-hopping. Neighboring beaches, blissfully free of bangkas, are there for our perusal. Plenty of places offer kayaks for rent (bring snorkel gear) and I’ve read that hiking can also be undertaken at a few of the islands. Renting a motorcycle and exploring the surrounding areas can be nice. It’s hard to appreciate an overcrowded fishing town, and even harder not to feel guilty about being a tourist when we see firsthand the damage we are doing by following the masses to every popular destination. But the archipelago is jaw-dropping gorgeous. We have no regrets having visited Bacuit Bay. 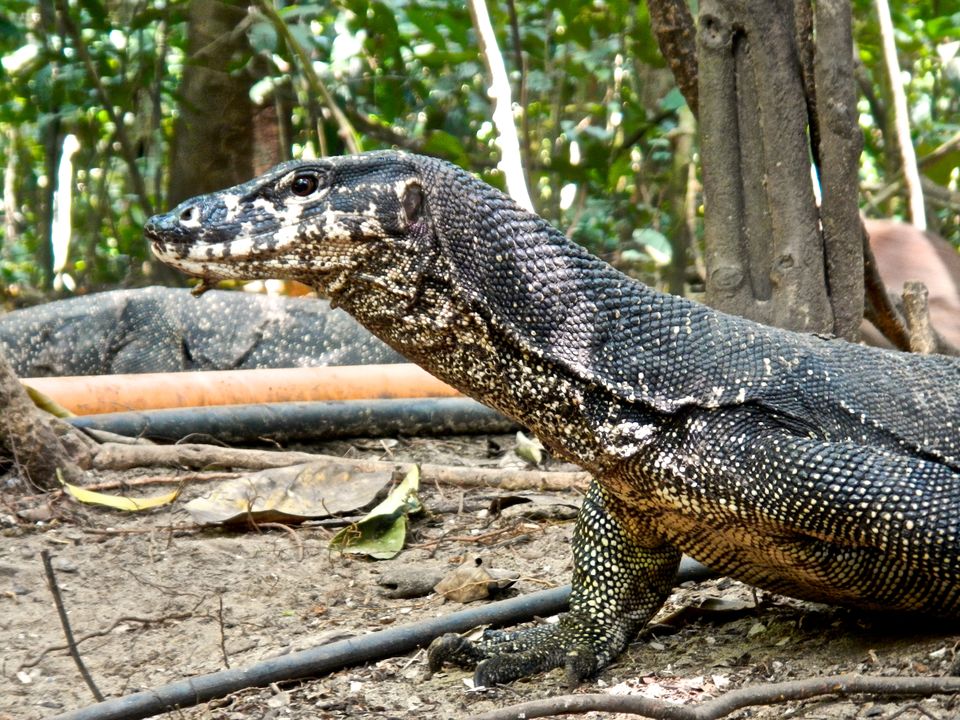 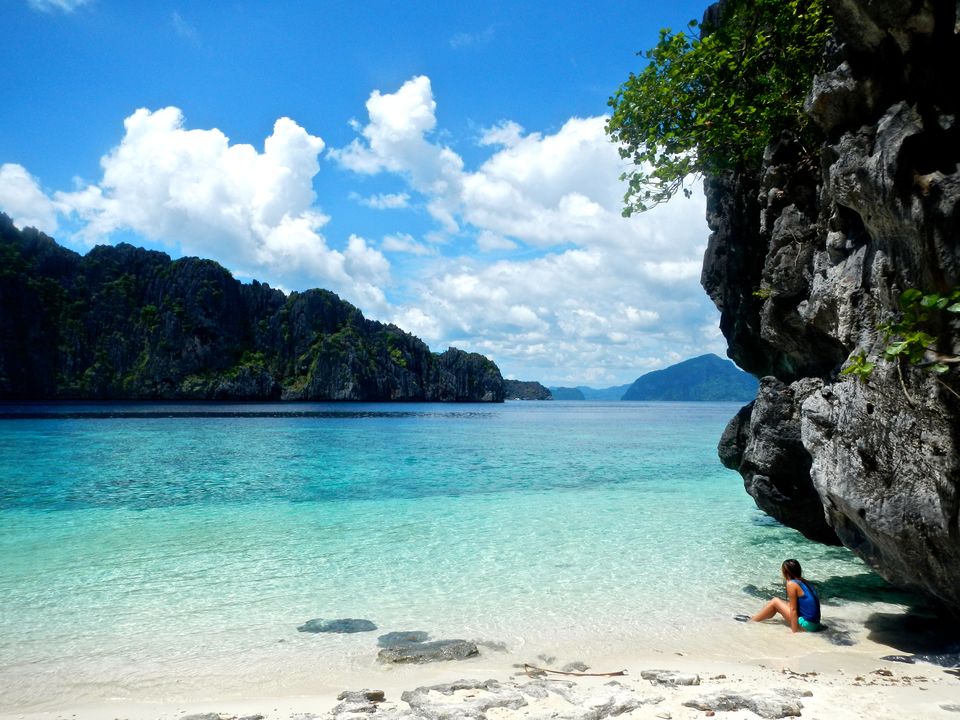 The Calamian group refers to the cluster of islands at the northern tip of the province of Palawan; Busuanga is the biggest and most populated island of the Calamian group; Coron Town is the biggest town on the island of Busuanga; and Coron Island is a gorgeous karst-ic (I just made that up) island a few minutes boat ride from Busuanga. Coron Island is inhabited mostly only by the Tagbanuas people, so that’s why most people opt to stay in Coron Town, and do their sightseeing from there. Island hopping around here usually means going over to Coron Island, which offers a handful of incredible lagoons, a whole bunch of bleached beaches, and some damn fine snorkeling. There are other destinations in the Calamian group, all for higher prices, of course, but there’s something for every budget. Tours A and B are, respectively, 650 pesos and 750 pesos per person, which should include a buffet lunch and admission fees for each of the destinations. You can organize a private tour, but be prepared to pay for the boat AND the admission fees for each place you should choose to dock at. Many of the tour companies are interconnected, and you may find yourself on a boat belonging to another company. Makes no difference, really, unless you paid more than you should’ve! The only real difference is the weather— if the sun is shining brightly, any destination will seem like the ultimate paradise we all want to see. If not, well, the water is still clear …and, heck, yer still on vacation aren’t you? Enjoy it Be warned: the pictures everyone advertises of Kayangan Lake is NOT Kayangan— only the parking lot, as seen from the top of the hill via the hike to the lake. 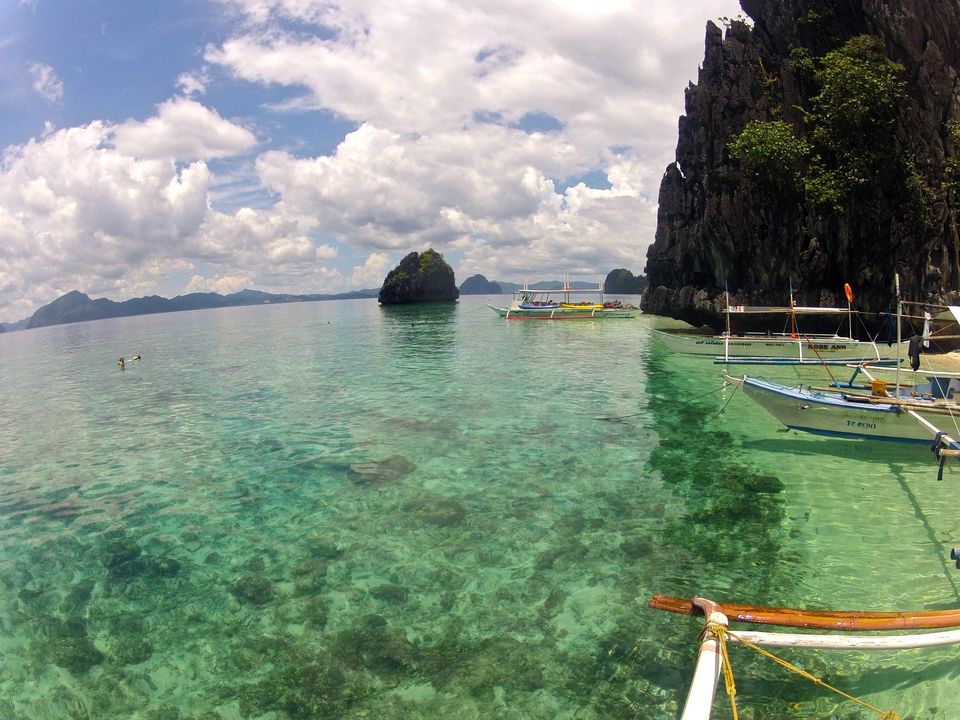 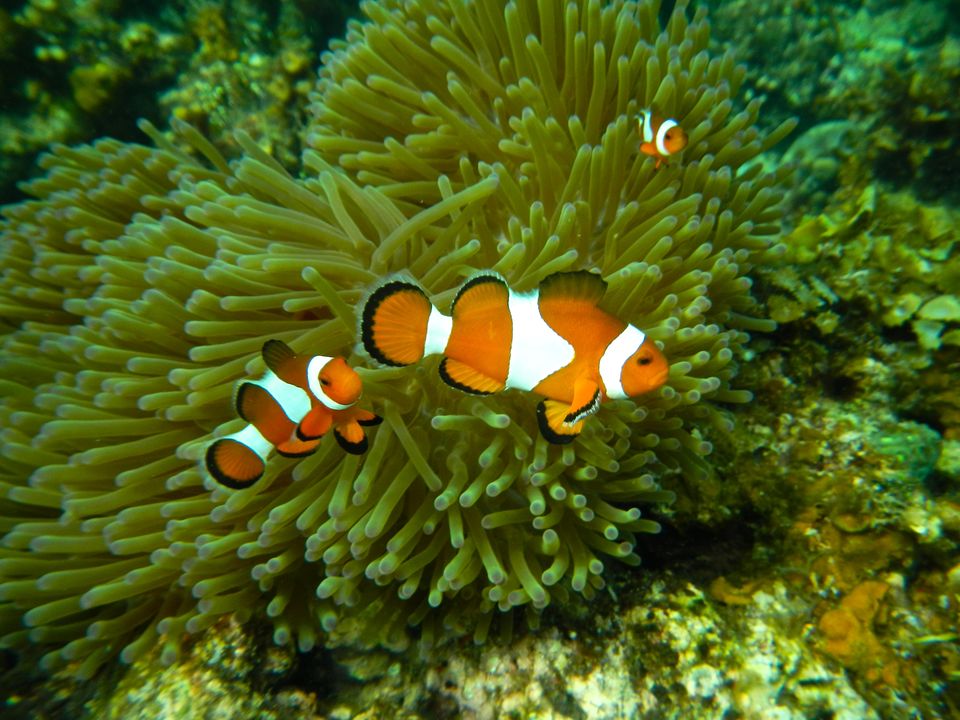 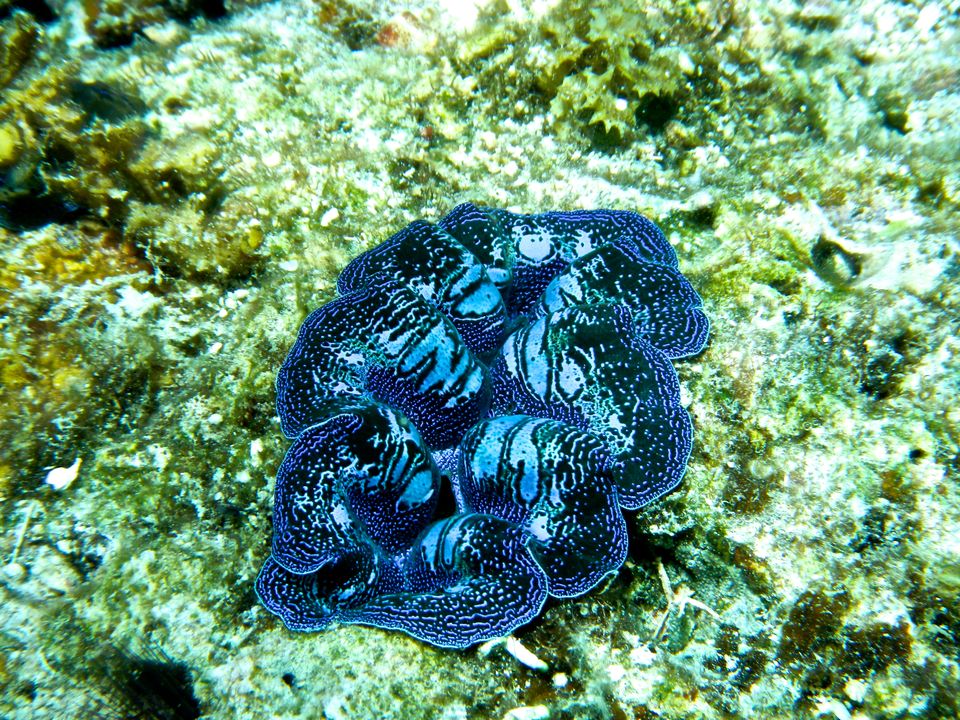