Along the northern border of Tanzania lies Mount Kilimanjaro, the roof of Africa. At 19,340 feet, its summit is over 2000 ft higher that is nearest rival in Kenya and no other mountain in the world exceeds its mass. The mountain is visible from the plains of the Kenya and Tanzania and consumes the horizon with its expanse. Though it rests just 3 degrees below the equator, it has snow and glaciers covering its summit much of the year. The mass of Kilimanjaro is over 43 miles across the base and 15 miles wide. It is said by geologists that the weight of this massive block of mountain is so heavy that the earth crust is depressed by it. The mountain rises out of the northern plains of Tanzania and steadily climbs up to a large saddle at 14500 ft. The saddle lies between the two peaks of Kilimanjaro. To the east is the minor summit called Mawenzi, which rises to over 16,000 feet high. Mawenzi Peak is the fractured remnant of a volcanic sideshow that occurred eons ago on the east flank of the main summit. The main summit, called Kibo, is a decapitated pyramid that is nearly block shaped, rising 5000 feet above the saddle between the two halves of the mountain. The slope gradually angles up to about 45 degrees making the final ascent to the crater rim, a steep climb that challenges all who attempt to reach the top. The summit of the mountain had multiple craters – a product of multiple eruptions that have left large glaciers over the crater floor and along the southern aspect of the mountain that receives less direct sunlight. These glaciers are regressing, and have a peculiar appearance with shear side walls that are exposed fully during the dry season and show the many layers of deposition that were created during their formation. Tips: This route is limited to the guide service run by Kibo Slopes Safari Tours. The lack of crowds of trekkers and climbers makes this route especially appealing.

There are a handful of routes to reach the summit of Mt. Kilimanjaro but many guide services attempt to get their teams to the top in 4 days. This route is one that will allow you to acclimatize well and also see different aspects of this great peak. You will start on the north side of the mountain from a town called Loitoktok in Kenya. From there you will be driven to the Rongai Gate and to the Nalemuru trailhead at 6500 feet. This is where you'll meet your guides and porters and begin the climb. Camp 1 is at 8700 ft about four miles up the trail making it a relatively short hike to reach the campsite. The climb on this day is through a large area of cornfields created by Tanzanian squatters at the edge of the park, then a brief incursion into a thin band of forest before the trees turn into tall scrub. Your guides will be working with you to find a slow pace that you can sustain all day (and night) for the summit day. 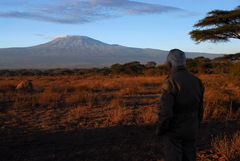 From this camp, the views of the plains of southern Kenya may begin to emerge. Often the cloud layer is at this level so you'll not see much until you begin the climb on day 2. The camp is located in an area of tall scrub with a view of the summit if the weather is clear. 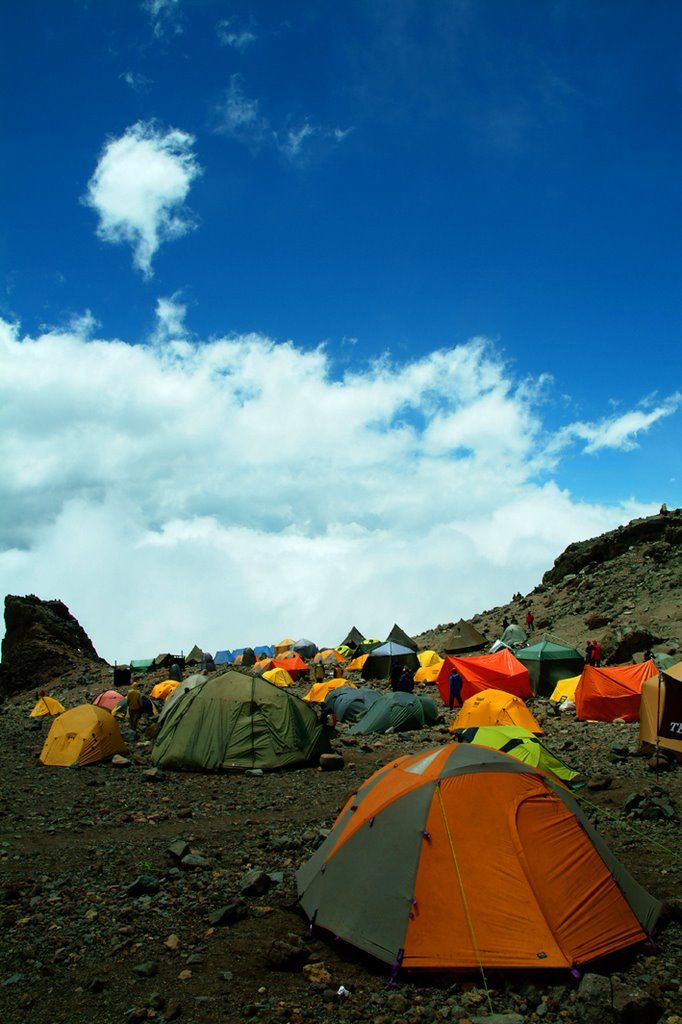 After Camp 1, the next camp is in the direction of the Mawenzi Peak. Camp 2 was located by the Kikelewa caves at 12,070 feet. Taking this detour is designed to allow you 2 extra days to acclimatize. Climbing more than 3300 ft (1000m) a day increases your risk of acute mountain sickness so planning a route with acclimatization days built in improves your chances of success at reaching the summit and will make it more enjoyable while you are getting there. The hike on day 2 involves a 3400 ft climb followed by a long traverse to the east toward the camp. Stop for a lunch break at the “Second Cave” – a volcanic vent that has lifted the ground up and created a sizable overhang that could hold a number of people. In the afternoon, traverse southeast towards Mawenzi Peak. You will be above the cloud layer so it can be very warm on this traverse. This will be your first entry into the higher alpine scrub terrain. Stay well hydrated by drinking at least 4 liters a day. Dehydration is a significant risk factor for both acute mountain sickness.

Day 3 marks a big ascent to an elevation that can make or break the climb. Climbing to over 4000m is a good test elevation for how you will do with the altitude. Climb directly toward Mawenzi Peak to the tarn located below is towering cliffs at 14,180 feet. At this elevation, if someone is going to develop acute mountain sickness, this is often when the symptoms may begin. Many climbers opt to take acetozolamide to reduce their risk of getting AMS and other high altitude related complications. Consult with your physician before you leave and bring the medication with you as it is useful in the treatment of AMS. As with any altitude related illness, descent is mandatory if symptoms worsen, especially if headache or shortness of breath become progressively severe. 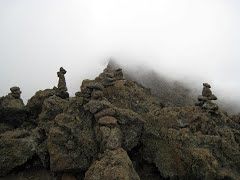 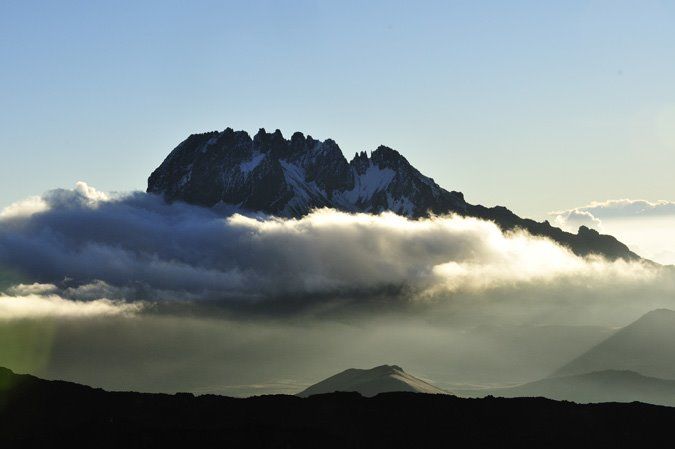 Before proceeding to the School Hut, stay an extra day at Mawenzi Tarn (build this into your climbing plan). This provides a key extra day for acclimatization. It may cost an extra $100 for the day but worth the investment if it takes your chances of making the summit from 50% to 90%. The climb on day 5 takes you straight toward the summit massif of Kilimanjaro across the long saddle that separates Mawenzi from Kibo summit. The saddle is a long traverse at about 14,000 feet elevation that gives the climber an additional day to acclimatization as they cross the saddle to Camp 4. There are 2 main camps used on the east side of the summit. The “Tourist route” uses Kibo Hut camp at about 15,300 feet located on the main route up to the crater rim. The lesser-used camp is where the Outward Bound School Hut is located at 15,700 feet. The route to the School Hut is a bit longer climb the next morning but provides a route with only a few climber for the majority of the climb to the summit. Make your way to the Hut and conserve our energy for the summit bid which start in the middle of the night. Eat, drink and rest. 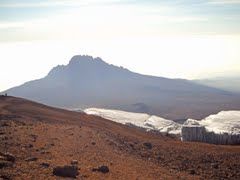 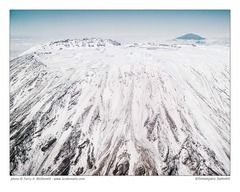 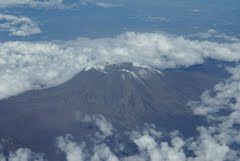 You'll be up at 11PM or 12AM to prepare for the night climb. Your goal will be to arrive at the crater rim at sunrise (around 6AM). Step out of the School Hut into the cold mountain air in pitch-blackness. You will start out the steep, switch-backing trail that is the route up to the rim. Set a slow pace to keep your strength in reserve for later in the day. Through the night you will pass through various rock formations and along cliff bands but it will impossible to make out the features as you are moving along. Be aware of cold feet and hands, and sleepiness through the night as the temperature is often close to 0 degrees F (- 16 C). Depending on our pace, you will reach the main trail from Kibo Hut between 3 or 4 AM and there will be many more climbers along the route. At about 5 AM, the sky will begin to brighten and you will able to see Gillman’s point not to far away up the steep 45 degrees slope. At sunrise prepare for the stunning views below you and Mawenzi peak on the sunlight horizon. It is impossible to describe the beauty of the scene, even pictures fail to do it justice. Once you arrive at Gilman's Point, take a water and food break to gain some energy for the last bit of climbing to the summit. 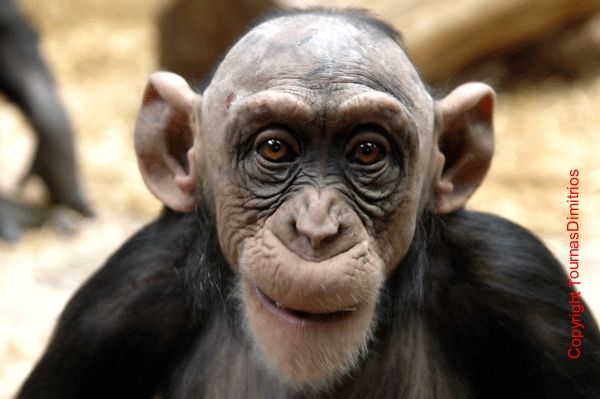 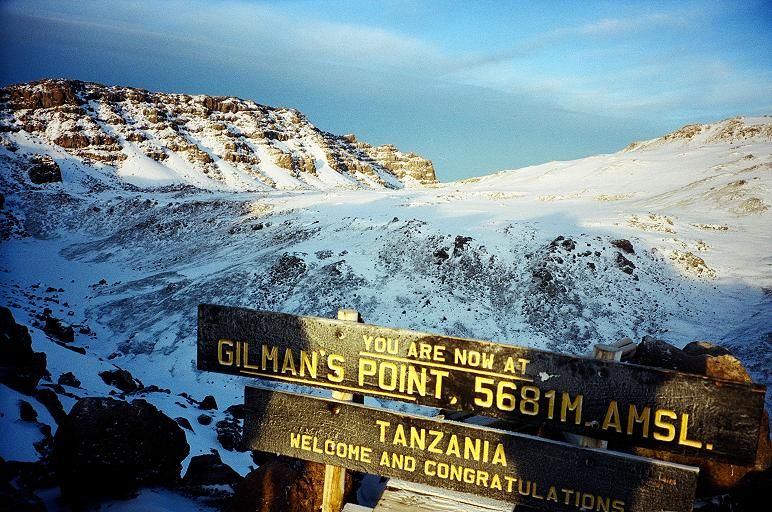 As you rounded the rim to the southern face, you will see the massive Rebmann glacier that rests on the SE side of the summit dome. Make your way west around the crater rim and up the gradual slope in very thin air to Uhuru Peak at 19,340 feet (5875m) – the summit of Kilimanjaro and of the entire continent of Africa. If you are fortunate, the clouds will melt away and you will see spectacular views of the crater and the panorama toward the south. The south-facing glaciers were stunning walls of ice visible in the final several hundred feet to the summit. 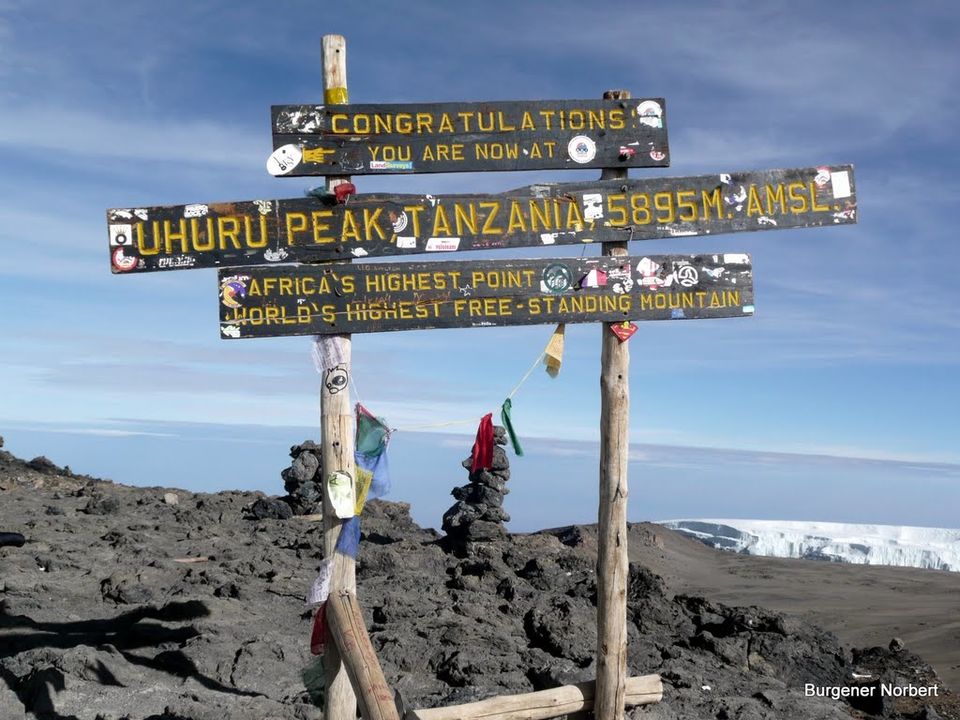 After your time on the summit, head down back the route you ascended to Gilman's Point. Look down the steep face of scree and irregular rock that you had slowly climbed up all night. The 3,500 foot face may seem imposing at first, but after scrambling down the initial rocky portion, you will enter the long, soft scree slope that is more like volcanic sand. You can nearly run down the scree once the sun had warmed it and descend the slope in about 1 hour. At Kibo Hut, stop for lunch to rest a bit more before the long hike to Horombo Huts. 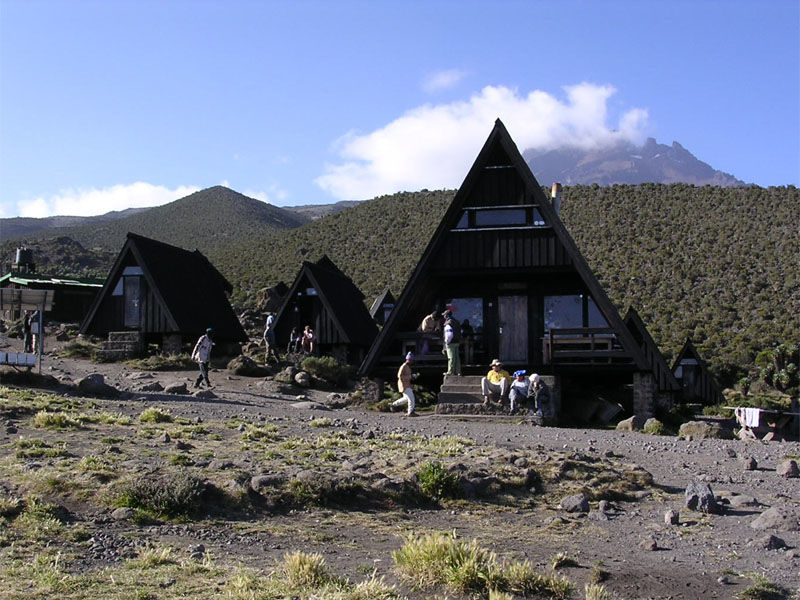 Time to get back on your feet again and start off down the 5-mile hike to Horombo Huts at 12,280 feet. This can be a particularly grueling section as you have likely been on your feet for over 14 hours at this point. The descent is fast, however, and will take about 3-4 hours. When you arrive at Horombo Huts, you've finished your days work. 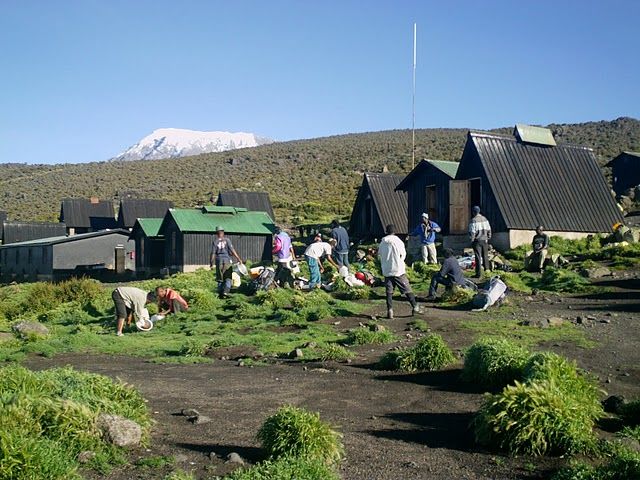 The final day is a 10 mile hike to the Marangu Gate. It is a 6000 foot descent the gate so you're work is still cut out for you. You'll travel through high scrub desert, woodland scrub, then into a tropical rain forest. The air is noticeably thicker and it will seem easy to complete this stretch in 3-4 hours. At the gate, signed out and get your certificates for the climb. You will want to book a room in a hotel and plan on cleaning up. The climb is very dusty and you'll be amazed at the amount of the dirt you've collected from the mountain. Uhuru! 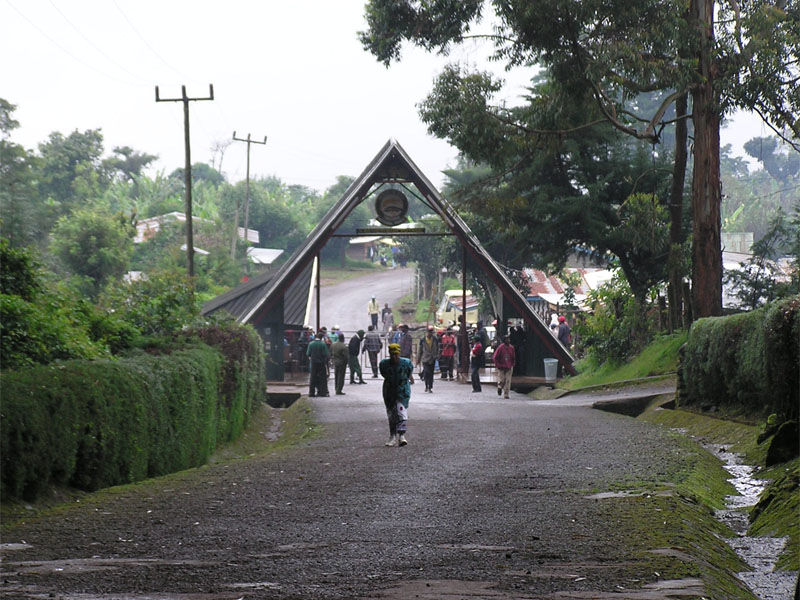