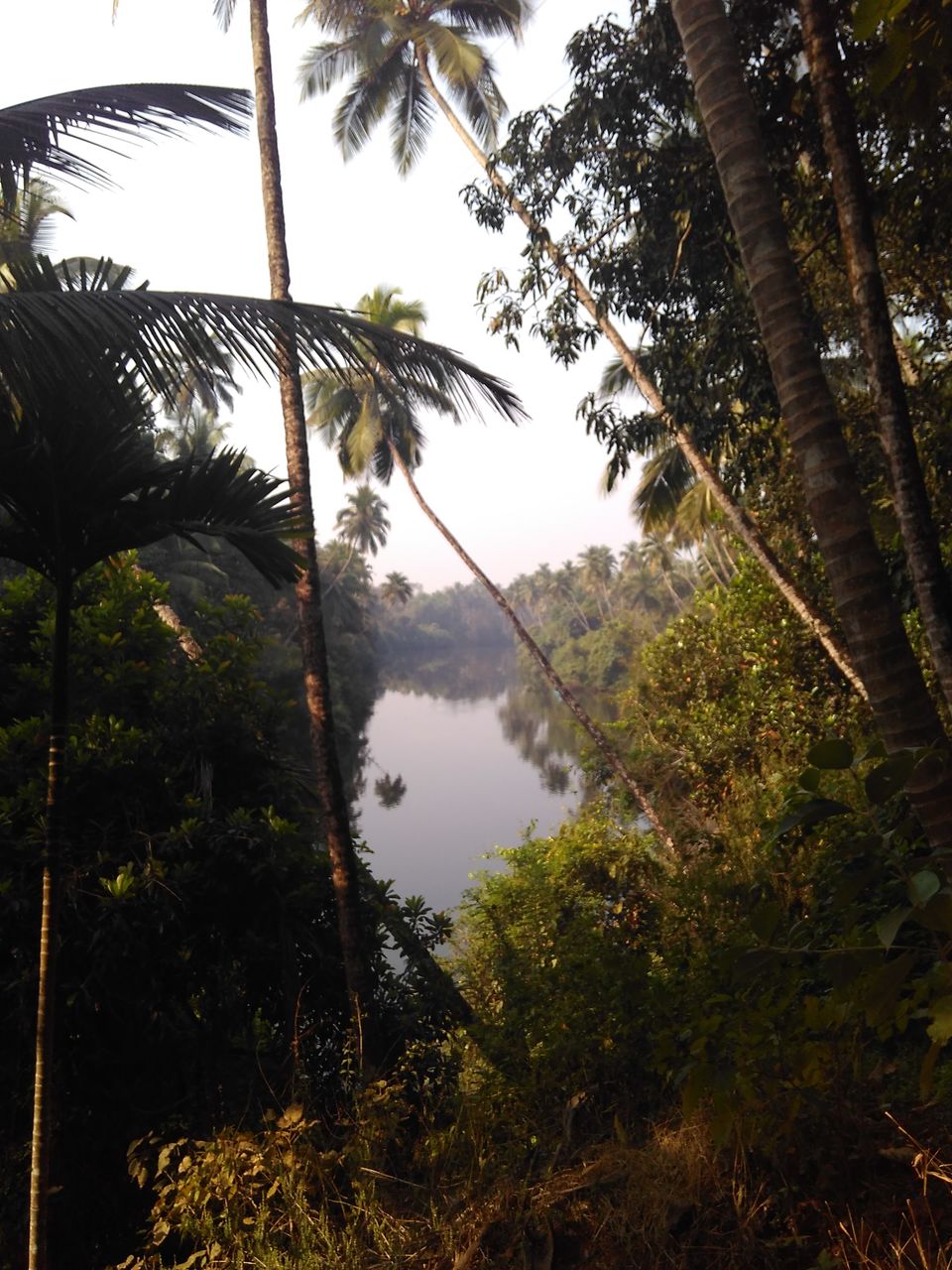 Wildlife and Goa doesnt go together, unless you are talking about the "wildlife"of its beaches. But Goa has its fare share of wilderness if you look beyond its beaches and Nightlife. I recently got an opportunity to do just that. Goa, far away from the touristy spots.

I have always been an avid wildlife enthusiast and my enthusiasm isn't only limited to big mammals like Tiger or elephants. India is bestowed with diverse wildlife and majority of them are small, not visible to many when they visit our national parks. They are ignored so much that even the Forest department in many places are not aware about them. Due to this, their population status, conservation issues and knowledge about there habits and habitats is relatively unknown. But gladly, there are few passionate individuals who have the wisdom to look beyond the usual hoopla surrounding our bigger mammals. One such individual I came across is Atul Sinai Borkar, a goan native, who is working on Otters in Goa.

Atul runs an organisation called Wild Otters. He is the founder of Wild otters, Goa. A Mechanical Engineer like me, Atul started Wild Otters in 2014 to study otter status and distribution in Goa. I got to know about his organisation while randomly googling about otter conservation in India. There are not many people in India who have worked for otters but Atul is one of the few. I got impressed with his work and made a small donation towards his initiative. While talking on emails with him, I got to know they also take volunteers. I became further intrigued and decided once I am back to India, I will visit him.

It was almost an year after we started talking that I finally planned to visit Wild Otters. It was February 2016 , good time to visit Goa but I was only interested in otters, not the usual affair most people associate Goa with. My family and friends were pretty confused why someone wants to visit Goa for otters, an animal they have never heard of. Can't blame them, for many Indians, visiting one of our tiger reserves is the only wildlife experience they can vouch for, but a unconventional traveler I am, wildlife outsides our protected areas is far more interesting to me then watching tigers in our tiger reserves, most of which have turned into glorified zoos.

So I packed my backpack and took Rajdhani train from Delhi to Madgaon, destination was thivim, closest train station to Sanquelim, the field station of Wild Otters.

The field station has a very beautiful balcony from which you can spot several birds. There is a coconut, areca nut plantation owned by sawalkar family besides the field station which resembles a small tropical jungle, and, as per Atul and hannah, attracts a lot of wildlife. They have recorded almost 60 varieties of birds in this small patch of plantation alone, many of whom can be seen from the balcony!!

Other then its human denizens, the field station has its own in house dog by the name of Ray, and a cat named, lo and behold, kitty. It seems Ray was bit too excited after meeting me, while kitty, like a typical cat, wasnt interested at all.

After freshening up, we got talking. I was quiet interested to know how Atul started it all. Atul, after working for 6 years with a leading IT company in pune, decided to leave his job to chase Otters!! He, in the beginning, worked with Mhadei Research Center and even published a small guide book on small mammals of Goa but later decided to research on otter on his own. In a country where most of the wildlife research is obsessed  with big carnivore, he picked an animal not many people know about. Otters are largely an aquatic animal belonging to weasel family. They are excellent swimmer and primarily fish eater, and this is the reason why most of them get into trouble here in Goa. Goans, especially the fishing folks, consider them as vermin since they believe they steal their fish and hence dont like them. In fact a lot of them cant figure out why some one wants to research on otters or Uda, their local name in konkani. This is the gap Wild otters team want to fill. Wild otters doesnt believe in the philosphy of preaching these fishing folks, but rather they want to come out with scientific fact to see whether this attitude of fisherman towards otters is uncalled for or not. So, a major part of their study is focused on Otters habits and its feeding habit which can affect fishing folks livelihood.

Wild otters is working on both otter species found here in Goa. The larger smooth coated otter and the more elusive and the smallest otter species in the world, the small clawed otter. The field station is decorated with otter pictures from Goa, taken by atul, and resources on their work here. we spend the afternoon to see camera traps images of otters, and then Goan salubrious climate overpowered me and I went to take a short nap.

After dinner, me, Hannah and Abhishek went to look for wildlife in the adjacent plantation. We checked our flashlights and wore over slippers, ready to go inside. The plantation is pretty dense and a close canopy forest. We could hear the hooting of a brown wood owl and we went on that direction where the call was coming from. And there it was, perched on the top, hooting, a beautiful brown wood owl, a lifer for me!!!

The plantation came alive during the night. Its so full of life. Hannah told me they have seen wild boars, civets and even a baby crocodile right in the middle of plantation, in a small canal flowing through it. We did managed to see one Civet, a palm civet, perched on top of a tree, eyes shining and looking at us. It was a great time exploring this small patch of wilderness. After an hour or two, it was time to go back.

Next day, me and Abhishek went to Amona, one of the field sites of Wild Otters. While driving, we passed through a Iron ore mining area. Off lately, Iron ore mining has increased tremendously in Goa, becoming one of its major money churners. But it has a very detrimental effect in the forest around, although Goa abounds by forest, but many of it lie degrade due to mining. I was wondering how otters have fared in such mining areas, since otters are an indicative species, means, they indicate the health of the ecosystem. We drove through fields, marshes, degraded forest and reached the fishing village of amona. It lies close to the sea, a brackish water habitat, suitable for Smooth coated otters. For me, it was quiet fascinating to know that otters also live in such places since I thought Smooth coated otters are exclusively a Fresh Water species. But, as abhishek told me, Otters here are faring quit well.

At amona, we were looking for fresh otter spraint. Otter spraint is nothing but otter poo, which is a good way to determine the presence of otters in that area and what they are eating. Since otters defecate in groups, it also acts as the indicator of the size of the group. Most of the Wild Otters camera trap are situated close to these community defecating areas. We checked one of the camera trap to see what we got, there were pics of fisherman, dogs, mongoose and a solo Otter, might be a transient male looking for another territory.

Amona is also a good birding area. Since both freshwater and brackish water is available, it attracts a lot of birds. It was quit hot and also humid, so we decided to go back to the Field station.

Back at the field station, we met Jessica, another researcher who is currently pursuing her Masters from Pondichery University. She is working on a project to determine what fish species the otters are consuming and what commercial importance they hold. That literally means collecting otter spraint, cleaning them and then picking up fish scales from it and try to determine the fish species!!! Though it sounds disgusting to some, but for a wildlife researcher, finding animal feces is nothing short of a discovery.

Abhishek left for Bangalore, since he is doing another project on Small clawed otter in Moyar, Tamil Nadu. Next day me and Jessica went to Divaar, another field site of Wild Otters. Divar is an island situated close to Panjim. We rode Jessica's bike and I in particular enjoyed the beautiful Goan countryside. Now i know the reason why many filmmakers prefer Goa as shooting location.  Goan countryside is beautiful. The traffic is non existant in most places, each house has its own plantation, and Goans has this laidback attitude which is quit evident. The people it seems were pretty chilled out, very friendly. We took a ferry to crossover to Divar. Divar has a very old worldish charm to it. Portuguese style bungalows,  with newly painted walls, were every where. You feel like buying one such place and live here for your whole life. I enjoyed our drive here. We stopped in middle of a huge open field, which formerly were  paddy field but due to increasing salinity, agriculture was no more possible.

We were walking towards our camera trap position to check for any new signs. On the way, Jessica showed me several defecating areas. By the number of it, it seems this place in particular has good population of Otters. The place we were in does not lie in any protected area, in fact it was adjacent to Panjim and surrounded by human habitation all around. Its quit fascinating to see how  wild animals survive outside these protected areas. The place is shared by both otters and fishing folks alike.

My first otter sighting, and they didnt disappoint me. There were atleast 4 of them, may be the same family Wild Otters got camera trap images of. I could hear there distress call, something similar to squeaking, trying to figure who we were. All four of them were bobbling out, checking us out, and vanished in the waters, then suddenly came out from another place and repeated the sequence. Seeing an Otter in the wild is rarer event then seeing a tiger. I considered myself unlucky when it came to spotting wild animals, now I have to stop thinking that.

We had a good 10 minute sighting. I looked mesmerizing at them before they vanished. It was quiet an eventful day. We further explored the area since Jessica wanted to interview fisherman for her project. On the way we did some birding and also saw fresh Otter paw marks.

For the next 3 days, the Wild Otter team, another volunteer from UK, Angie and me went to other places as well. It was a good break from the routine wildlife experience people usually have. A great experience and you got insight on how wildlife researcher work. It definitely takes a great deal of patience. I was lucky to see otters but they are so elusive that Hannah and Jessica have only occasionally seen them during there several month long stay here. Wild otter team have certainly opened the elusive world of otters. If you are planning your next visit to Goa and have a genuine interest in wildlife, please visit Wild Otters team. They are great host and have some nice stories to share as well. Till then, enjoy the video.

HotelsMap
A small quaint town in Goa, far away from crowd