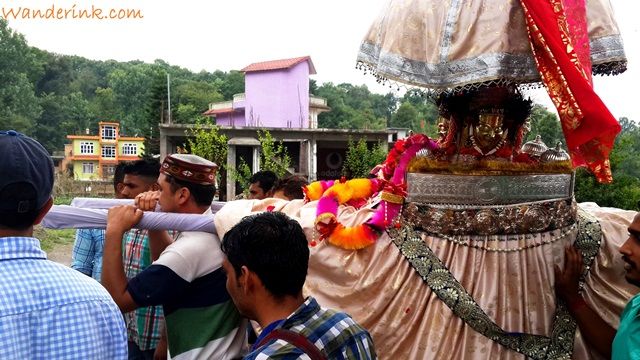 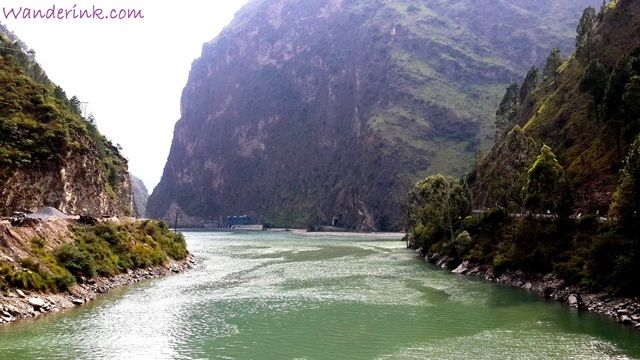 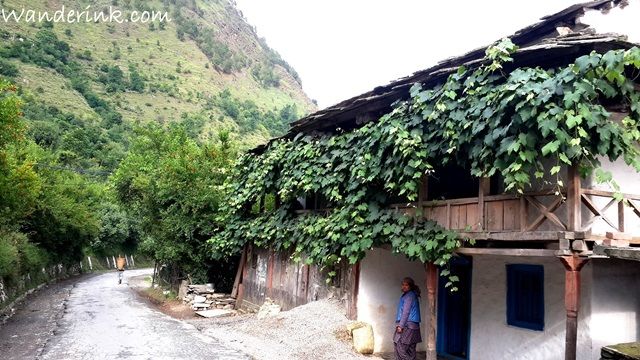 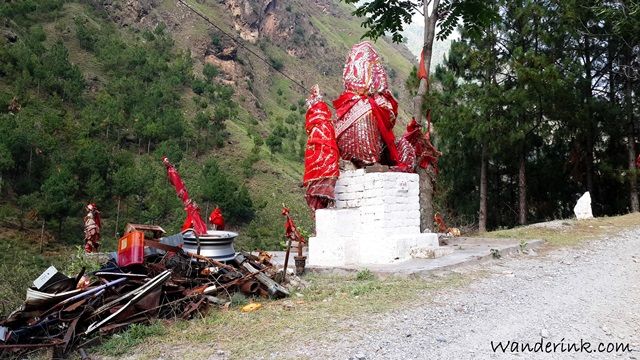 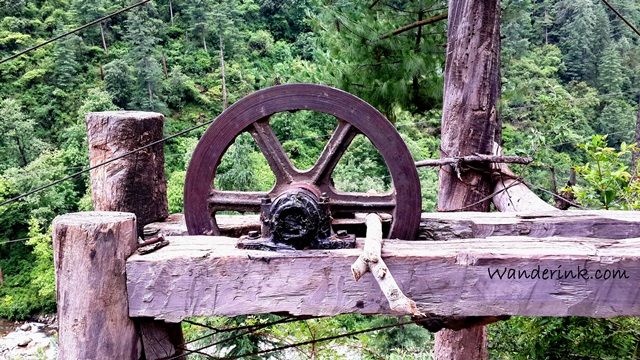 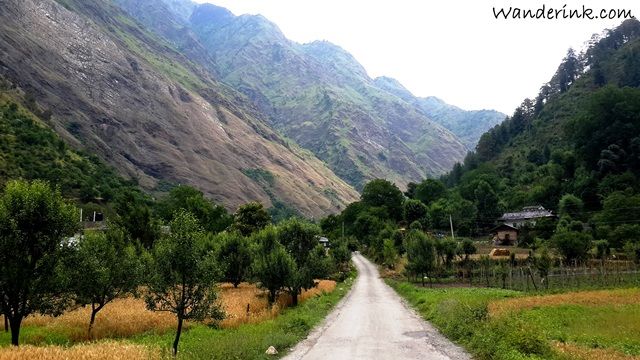 The palanquin bearer winced as he stiffened to an abrupt halt. You could see he was under untold duress; cold beads of sweat broke out from his forehead, his eyes bulged out from their sockets like those of the shikhara-supportingbharavahakas. He started again, squirming and with swaying steps. He convulsed as if invisible lassoes tugged at him in different directions. At one point his eyes became hooded – all you could see were the whites – and he made off for the trees. The small crowd – consisting mostly of men – panicked and ran helter-skelter; they had seen it happen before but the first, most natural thing you do when a palanquin bearer bears upon you is jump out of the way. With an almost superhuman effort he managed to stop his own blind charge. His knees buckled beneath and he keeled. And just as he was about to topple over, scores of hands reached out to steady him. Even then none dared to hold him onto the path or guide him in any particular direction. After all, it was the devta himself inside the palanquin – who was giving the orders and making those last moment changes in the route plan in his own whimsical, animated ways.

‘Balkameshwar.’ Locals made our hasty acquaintance with the deity. His silvery ornate parasol jangled a merry ‘howdy.’ He was off on a picnic, probably to some spot by the banks of the Beas River next door in Sundarnagar outskirts. A few were carrying boxes robed in sequined saffron-colour fabric, specially prepared viands for the celestial appetite. This is a familiar sight in Devbhoomi (‘land of gods’) Himachal Pradesh: deities being taken for a ‘stroll’ along the countryside, or to make a casual call on a fellow-deity, visit a troubled area or house – all under the strict watch of the local oracle, who is also the medium. The oracle’s interpretations range from high pitched shrieks to highland patois rendered in a mumble. The cues picked are mostly contextual. These devtas are very much a part of everyday life – there is at least one for every region in the state. And they have become everyday – there are cases pending against devtas in courts filed by other devtas. Balkameshwar seemed to be in a hurry to reach wherever he was headed to and with good reason.

The route to Tirthan Valley: From Chandigarh there are two options. The one which I took on my way up: Chandigarh – Rupnagar – Kiratpur – Swarghat – Bilaspur – Sundarnagar – Mandi  – Pandoh – Aut – Larji – Gushaini – Tirthan (280 km)

And the more scenic one on my way back, so scenic I’m mulling a separate post on it: Tirthan – Banjar – Shoja – Jalori Pass – Khanag – Ani – Narkanda – Shimla – Kalka – Chandigarh (290 km)

Both the routes take anywhere up to 10 hours on the road.

By the time we reached Mandi continents of clouds had massed overhead and started crossing shiny sabres. The daylight around us was fading and everyone rushed to get indoors. A kid skipped – yes, he skipped in that playground-jolly kind of way – across the road barely missing our car fender.

‘Did you brake or was the kid just lucky?’ Timorous taunts filled the air. The trip is taxing but the scenery that unrolls from Aut Tunnel (200km; you don’t take the tunnel but follow the right exit) onward makes it worth every cringing tailbone and creaking shock.

Other near-existential questions also rear a querulous head if you are driving.

We know that cement companies have deep pockets; our cricket captain is a namesake veep in one. Another one which has built and maintained a 165 km long expressway connecting Delhi and Agra has a factory in Kiratpur (76 km), Punjab. Why doesn’t anybody tell this multiple-business behemoth to build a similar one – concrete pavement, actually – around its own factories? Nearly half the running time is consumed bumping across and wading through monster potholes that dot most of the 100 km to Swarghat (Himachal Pradesh). As wiser writers suggest, the other option would be bussing overnight – popular with those getting into Himachal Pradesh from Delhi. The closest to this I can think of is a blindfolded romp with a Victoria’s Secret Angel. You know it was an Angel only after the romp.

The hydro power project coming up in Larji has mucked the road from Aut upward, most of the way till Banjar and Gushaini. Caterpillar trucks dashing from construction site to dumping site kick up white gravelly dust; centipede-wheeled, machinery-moving, snail-paced lorries get your bleating goat. But the scenery will keep your mind from plunging into abject misery beginning with the confluence of the Beas and Tirthan. Emerald green waters amble unhurriedly while the verdurous valley looks on. As you begin to trace the Tirthan River the landscape gets progressively lusher, houses fewer and quainter. Old multiple-storeyed dwellings with brightly coloured doors and windows, wooden porticos and creepers for awnings fringe orchards in bloom. Construction activities are on full swing in most of them which would render the facades – to start with – unrecognisable with the rest of the rich country design. You feel lucky that you are here, now. The solitude and the stillness are accentuated by the riverine peekaboo around the corners followed by the whoosh of the water carried by the breeze. In some parts the road goes through trees so thickly together that you can actually smell the green.

Tip: At Larji T point, you have to turn right for Gushaini; a little to the left is a petrol pump which might be handy especially if you intend to head out via Jalori Pass.

As we climbed higher, ‘spans’ began to make their appearance – iron pulleys fitted on sturdy wooden beams with industrial strength metallic cable used for ferrying goods from the road to houses high above and far below. Commodities including grocery articles were lying unattended next to loading cages – recently dispatched from passing vehicles. These were the mountains; clean air and clear sunlight nurtured unadulterated trust among the inhabitants. There is nothing you can do but marvel at it all. Local devtas draped in shiny, tessellated burgundy textile stood atop short platforms next to sharp curves. The oblations comprised solely of discarded automobile parts – these were drivers’ deities, protecting them on the highway. Surely around the more dangerous corners. You marvelled more.

Gushaini is a bunch of gulag-styled concrete shops huddled together. Like most mountain villages here too was a delegation seemingly assigned to permanently wait for the bus. There is a bus here that plies / flies along the vertiginous routes. It is blue in colour. And it buzzes towards you with all the ferocity of an agitated queen bee. Take shelter at the nearest shoulder. Maybe there is more than one – I didn’t notice as I was always scurrying for cover. Kids sauntered to or from school – it didn’t make any difference – chomping on popsicles and multi-coloured sweets. Wild berries by the roadside and the early hangings in the orchards weren’t even ogled at, unlike passers-by, who did so with unadulterated lust.

‘After a good woman, and a good book, and tobacco, there is nothing so agreeable on earth as a river’ said Robert Louis Stevenson in ‘An inland Voyage.’ How about a river with trout? It doesn’t alter the order but definitely makes the journey halcyonic.

Tirthan Valley is the gateway to the Great Himalayan National Park and its many fabulous treks. There are some very pretty and moderate ones around the Valley too – most of which can be covered over the course of a day provided there is the extraordinary willpower for a matutinal headstart. The morning I woke up in Tirthan, there was a magnificent hailstorm which bade me back to bed and to some of Stevenson’s ‘agreeable’ stuff.

Several resorts and homestays flank the riverbank – some accessed through zip line – that suit most budgets. More are on the way. The building spree is also in part due to the state government earmarking Tirthan River as an angling reserve; meaning, no hydro project is permitted along its 45 km course. Trout, originally from European waters, was introduced in the Himalayas as the English were fond of angling. Anglers along the Tirthan River have to take a licence and follow a ‘catch and release’ policy. Being more an eater than an angler I found ordering trout to be less heartbreaking. A staple fare in most dinner menus across the hospitality properties, it comes pan fried or coal grilled, barbecued or pecan crusted with the freshest salad and seasonal fruit organically grown.

This trip was first published on Wander Ink.