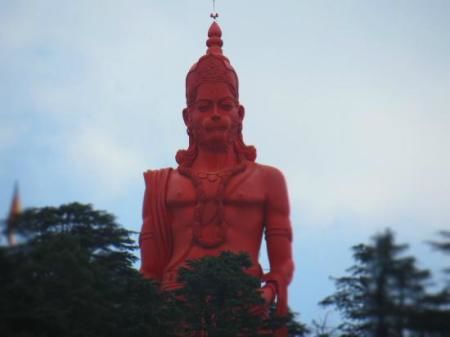 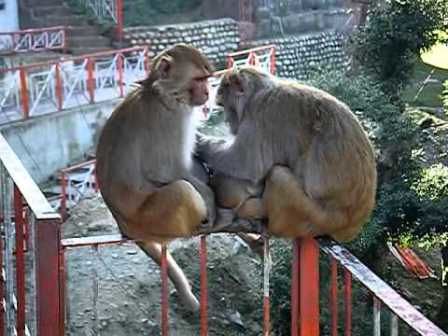 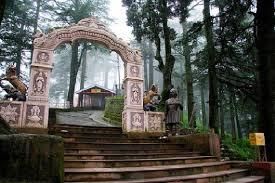 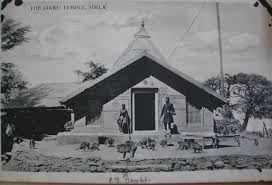 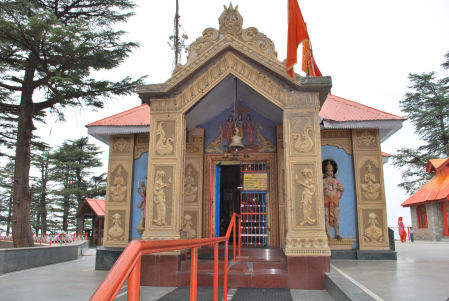 Popular as the ‘Hanuman Mandir’ among the localities of Shimla, the Jakhoo (or Jakhu) Temple has been on the ‘must visit list’ of most travellers. It is frequented by the devotees of the ‘Pawan Putra’ – Hanuman. People, who have never visited Shimla, know Jakhu for hundreds of monkeys around it. Different Monkey stories are popular and Jakhu is one of the important keyword in those stories.

The Jakhu Temple is located 2.5 km from the Christ Church at the Ridge. The temple is situated on the Jakhoo Hill which is also Shimla’s highest peak (at an altitude of about 8,050 feet). While trekking up to the temple, one can see the magnificent, 108 feet tall Hanuman statue behind the deodar trees. It will take around 20-30 minutes to reach the temple by the trail. Alternatively, you can hire a taxi to the temple that will just take 5 minutes.

The main temple complex has Lord Hanuman’s foot prints engraved on a marble (as believed by the devotees), paintings and statues of Lord Hanuman and Lord Ram. The pious chants (or Bhajans) and the ringing of bells fill up the entire complex.

Jakhu temple has an interesting legend behind it. It is said that a deadly arrow injured Lord Rama’s brother Lakshmana when he was fighting the battle with the demon king Ravana. A priest diagnosed Lakshmana and said that he needed a particular Sanjeevani herb from the Himalayas to cure Lakshmana. Hanuman was sent to get that herb from he lofty mountains. Upon reaching the Himalayas, Hanuman couldn’t make out as to which herb was the Sanjeevani. So he dug up the entire mountain and flew back to where Lakshmana was lying injured.

After Lakshmana was cured, Hanuman went back to place the mountain in its original site. He rested on top of the Jakhu hill for some time. It is said that the top of the hill got flattened due to Hanuman’s weight! The temple has been built around the place that is supposed to have the footprints of Hanuman. It is a highly revered religious place of Shimla and devotees throng in huge numbers to pray.

Jakhu is derived from Hindi word Yakhsa. Yakshas are the mythological character in Hindu mythology, who are a link between human and gods. The original dates of temple is not known, but it is believed to be existing from the times of Ramayana, a pre-historic event as per ancient Hindu texts. The Jakhu hill is the highest peak around Shimla, and is famous for its trekking options. The Jakhu hill offers excellent views of sunrise, sunset, mountains and town. The hill is full of narrow paths and roads which are an enjoyable walks.

In 2010, a huge statue of Hanuman is built near Jakhu Temple in Shimla. This is considered as world’s tallest statue at 108 feet at the highest altitude of over 8100 feet and constructed at a cost of Rs 1.5 crores, which surpasses the current tallest statue of ‘Christ the Redeemer’, which measures at 98 feet and stands at an altitude of 2296 feet in Rio de Janeiro, Brazil.

The fun part of the entire journey to the Jakhu Temple is the sight of monkeys in and around the temple. Some of them seem to welcome the visitors as Lord Hanuman’s ‘vanar sena’ (Army of Monkeys that helped Lord Ram defeat Ravana) while others are notorious for snatch the stuff you are carrying. Avoiding carrying wallets, cameras, especially any eatables to the temple as these ‘temple guards’ will snatch anything and everything they find attractive in your hands. It is always good to keep a stick handy to scare these monkeys away before they scare you!