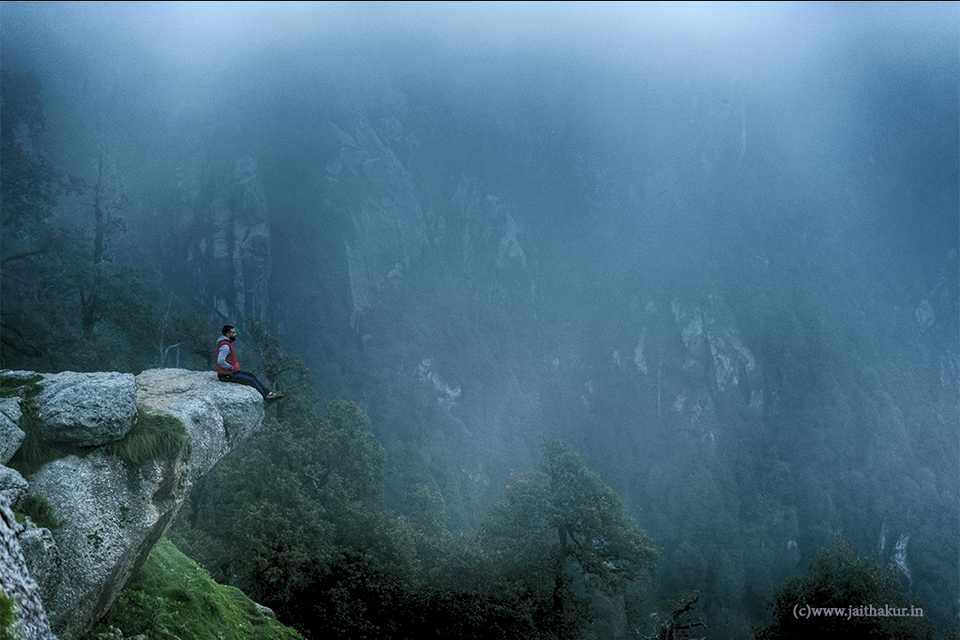 Tried in 2014, went again in 2015, succeeded in 2016. So, it was a sudden plan which was made on yet another boring office day. He said “dude let’s explore place which you know, I said why not?”. Plan approved for Triund. Since, I am into photography and had already explored McLeodganj/Dharamshala twice I knew exactly what to do in coming 4 days. We lied to our Manager, booked tickets, packed our rucksack and reached Kashmere Gate, Delhi on time, the only thing missing was “Fuel” (wink, wink). We boarded our bus and the journey started with the smoky smells of peanuts along with soothing sound of burps. Not to forget the horrible background score of Houseful 3, movie played by the driver.

We reached McLeodganj around 8:00 in the morning and it was romantically drizzling. Missed someone for a moment but the next moment I heard “move fast, you are blocking our way”, we started walking towards our hotel. Reached there, took a tight nap before hitting the market. I along with my friend had sumptuous breakfast in form of muesli, boiled and scrambled eggs, breads, tea, coffee, fries and juice. Since, the rain decided that it won’t stop, so we decided to buy umbrellas and that too those colorful ones (just for fun). For rest of the day we explored market and after having lunch we headed for Bhagsu Waterfall. It was drizzling, still good day to trek. Entire route was filled with tourists and mostly from Delhi and Punjab (Folks kindly refrain from throwing shit bottles and other stuff on the way to waterfall. Well! We reached, clicked some pictures and came back as there was hardly any secluded place to sit and enjoy the nature (So called civilized people doesn’t have a basic sense of respecting nature, it’s not a party place). After spending an hour, we headed back to our base in McLeodganj, had an early dinner and got ourselves busy in shooting stars.

Next day, early in the morning we started our trek. Suggest to carry only one bag with a water bottle, food, medicines and other important items. As we reached Dharamkot it started pouring cats and dogs. Locals suggested as not to proceed further as it could lead to mishap. We decided against their suggestion and carried out our journey. On the midway, there is one tea stall run by Chacha, we took a chai (tea) break and moved on. You can witness a beautiful lush green valley from point near Chacha’s tea stall which it named as “Magic View”. All clouds with green trees in between and indeed it was a magic view. The trek was not so difficult yet difficult because of the climatic conditions. After 4 hours of trek finally we reached Triund Top and Wow! What a view – clouds allover. Himalayas was massive, beautiful, and breathtaking. The first thing we did was - we threw our bags and lied on the ground and ordered food (rice/dal, Maggie Rs. 130 each). We booked a room in forest guesthouse and after negotiation got the room just for Rs. 500.

The room was inhabited by us and the clouds which were seeping in through the windows. It was a like a dream sequence in which we were actually living. Outside the room, the temperature was around 4-5 degrees. We made friends with Chipu (local dog). We spent 3-4 hours of our life literally into the clouds which was ended by rain. In the night we were lucky enough to witness heavenly stars all around. Next morning, we woke up at 5:00 and captured breathtaking sunrise behind the mountains through the clouds. We were completely lost there and wanted to stay back. But, with the heavy heart, we descended back to McLeodganj and reached there in less than 2 hours. After reaching McLeodganj, had a sumptuous Nepali Thali and post that headed towards Dharamshala bus stand. We boarded our bus and were back to civilization….

How to reach: Delhi to McLeodganj buses are available and then trek to Triund via Dharamkot

Stay: Budget hotels are in number at McLeodganj. At Triund top rent a tent

My friend enjoying the view 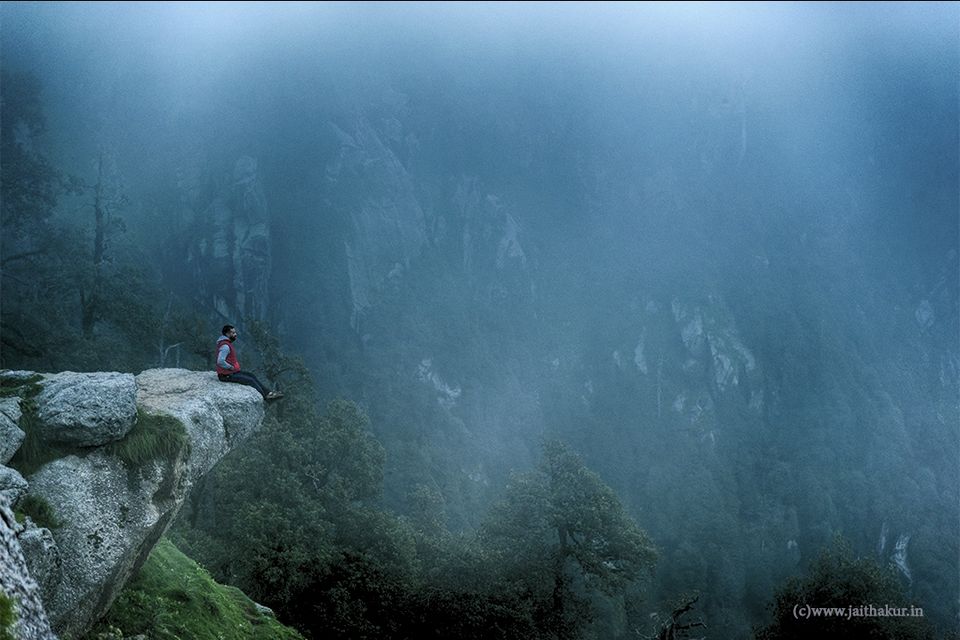 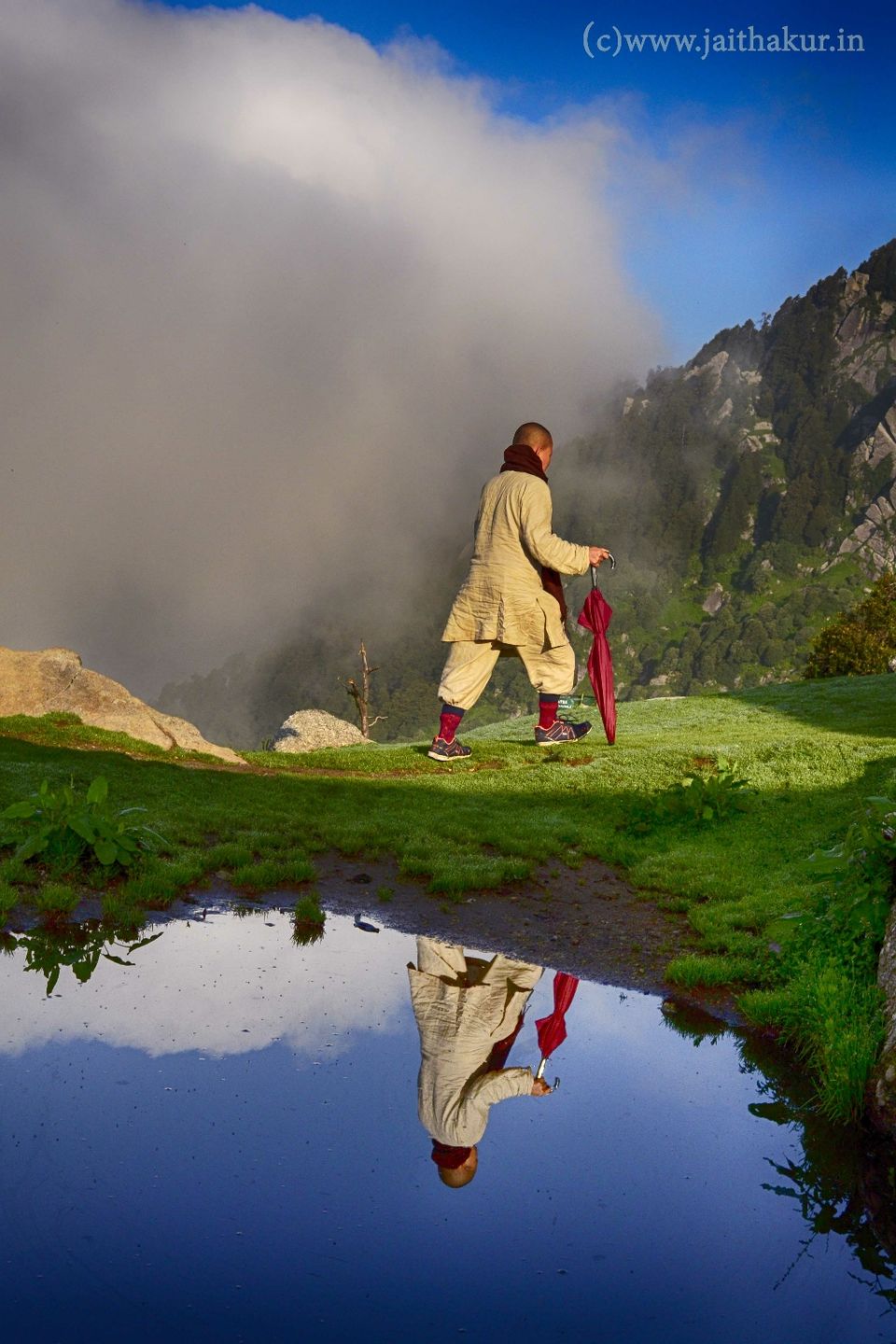 Me with my friend Chipu 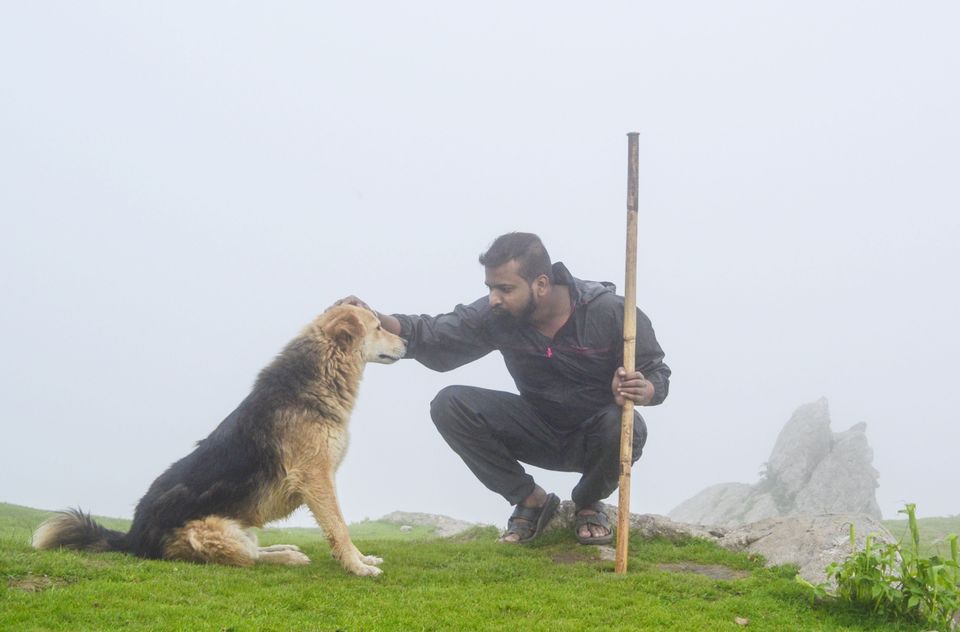 The view through clouds 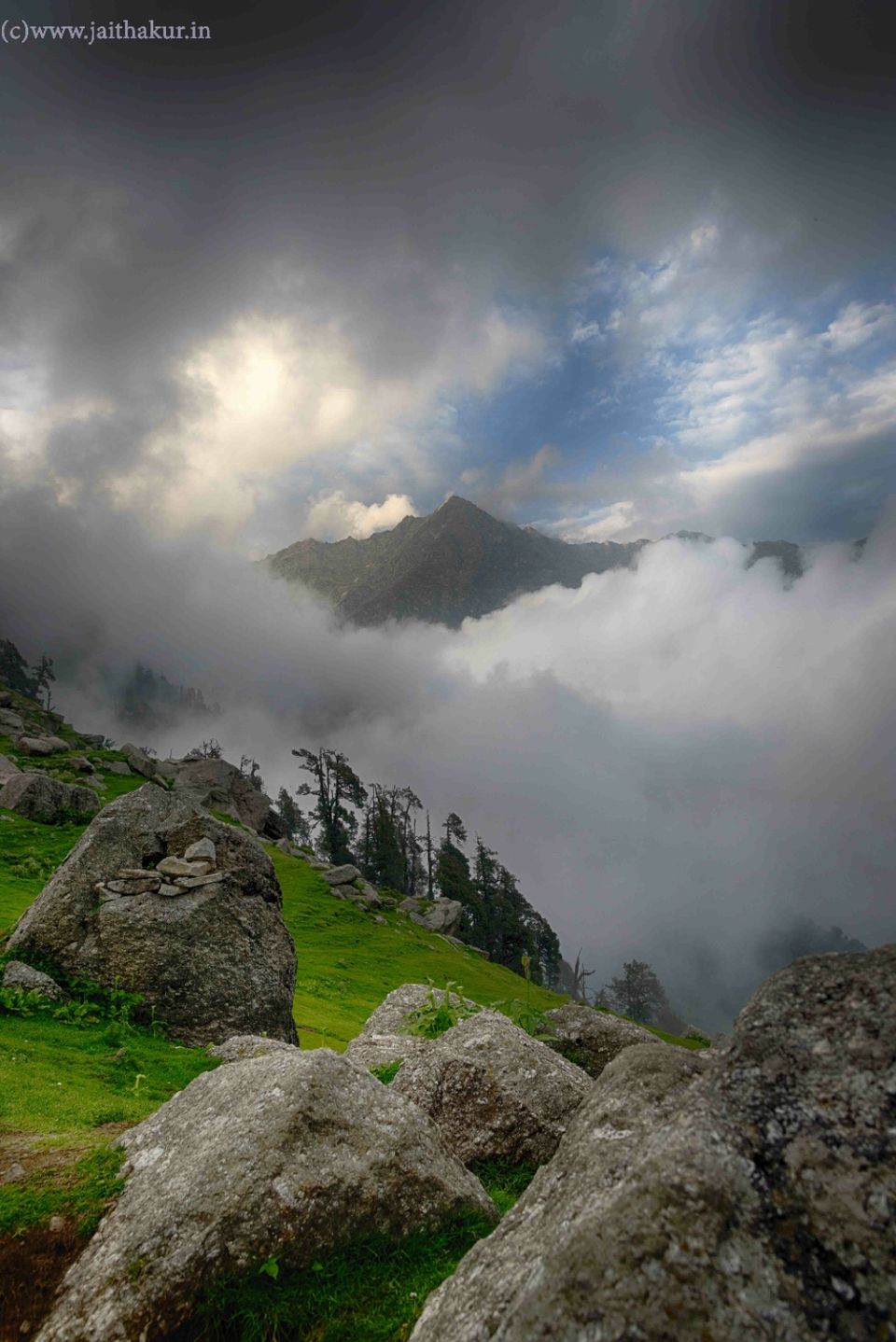 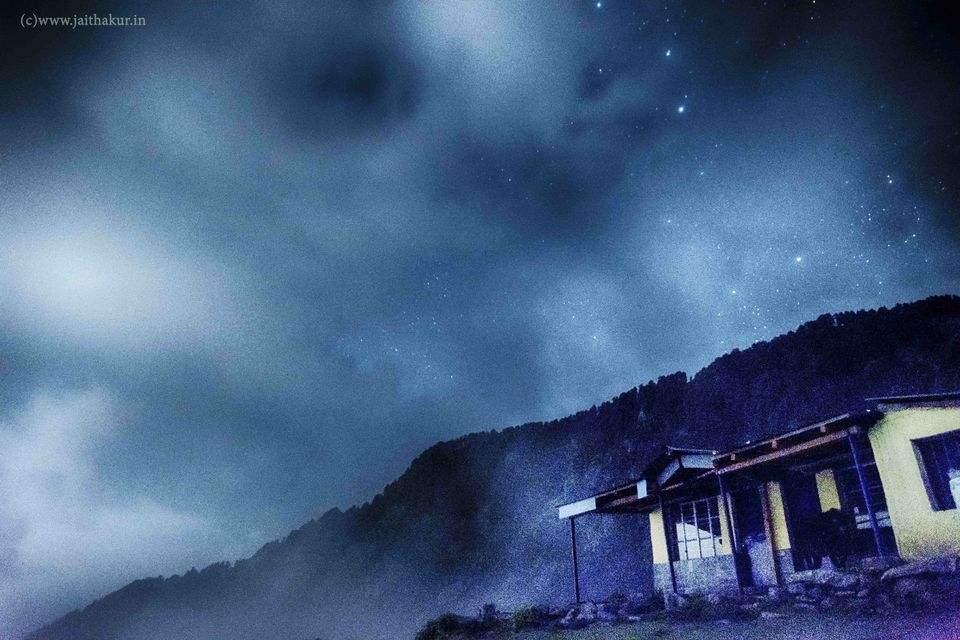 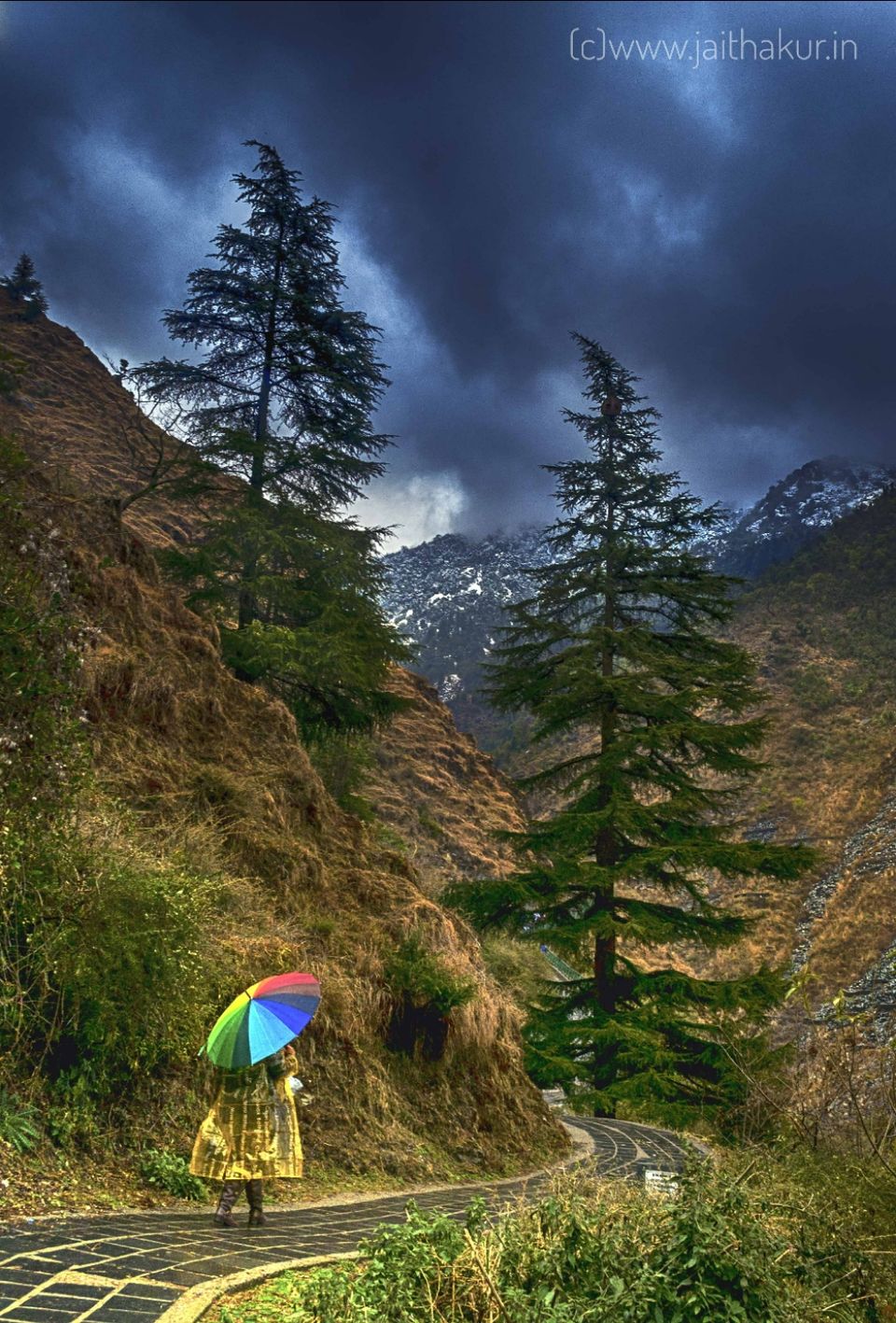 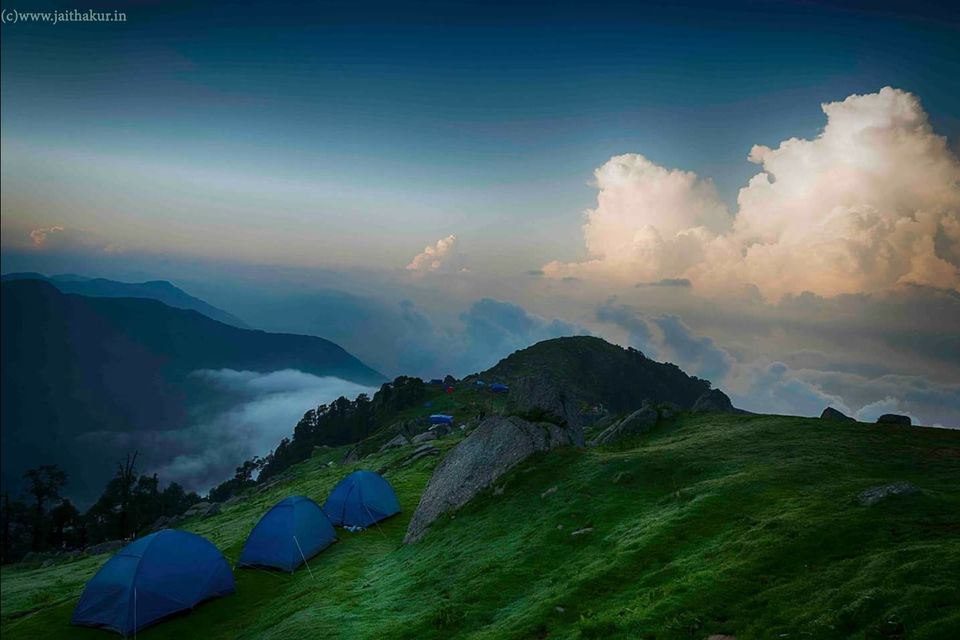