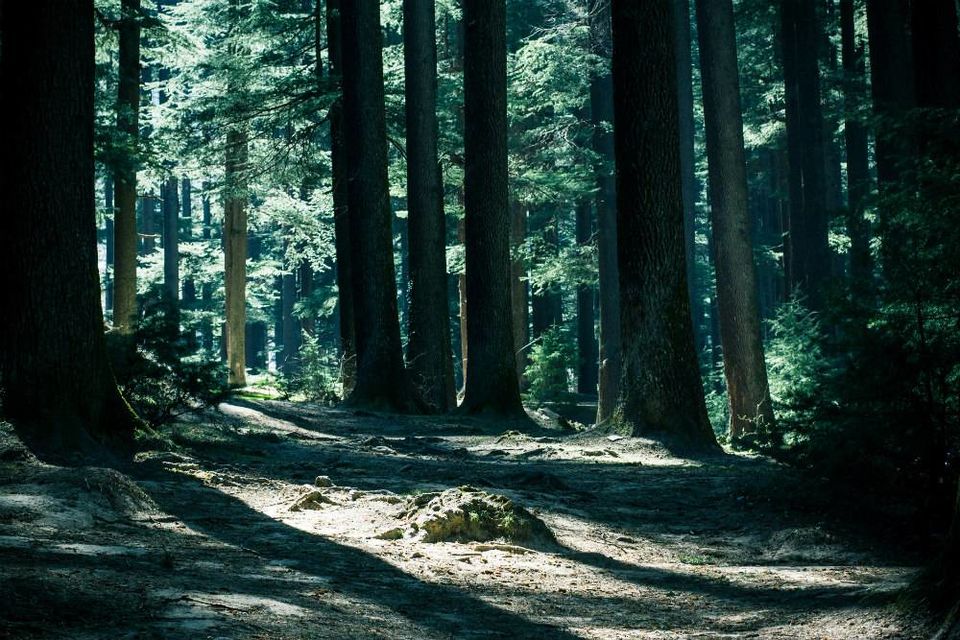 On my way back from the Manali bus stand yesterday, after enquiring about the ticket to kaza, I decided to make a quick stop at the pine forest that marks the road leading up to the Old Manali bridge.

Running down from the slopes of the Hadimba temple, the forest is first abruptly bisected by the road that connects new Manali to Old Manali. And then further down valley is stunted by metal grills, where the forest meets the Beas river. This pine forest is your quintessential location for a horror story.

I was here some time back with a friend. We had walked in towards the afternoon and loafed about till the evening. Finding an enormous rock to accommodate us both, we had settled down to smoke in the eerie silence of the gigantic, overbearing pines; where the sun light mixed with the mist and scattered all around us. I remember we had screamed gibberish into the stillness of the air and sung songs to challenge the mist that rose steadily.

I couldn't quite resist the temptation to relive something similar this time too. Just that I entered a bit too late. It was about 6.30 in the evening and the sun was already setting over the hills on the far west. By the time I found a nice moss free flat rock where I could plant myself, my eyes were already straining themselves to see clearly around the forest.

The crickets and an entourage of other bugs with the strangest croaks were about their daily duty of adding ambience to their surroundings. Punctuating a kind of foggy silence that's hard to explain.

Even though I've not walked too far away from the entrance, I can't hear anything from the road that hugs the forest on two sides. I'm fairly close to the metal grill that separates me and the forest from the Beas. Across the frothing waters, a group of tourists holler next to a cafe that serves fine coffee. Yet my mind if occupied with the ocean of silence behind me, which I can't ignore.

The silence is so heavy I can feel it pressing against my back and ears. I try my best to ignore it but it won't let me. Jim's stories from last night at the café, about the notorious legends of the Hadimba temple crowd my mind.

Jim and Badal (both cynics from Delhi) have cooped up in a home of sorts near Hadimba Temple. They party late till night and return home to crash. It's been a month they have been at it.

However, the locals have warned them about using the route from 12 t0 1.30 at night. "Don't mess with the goddess" they have been told. But Delhi folks. Do we believe in such stuff?

However, Jim recounts how one night while walking up the stairs, they encountered a horrible stench. The next day Badal narrates the same story minutes after we have met. This clearly is the highlight of their stay in Manali. He says he saw a tank and thought the smell was coming from there and wanted to take a look. Jim's drunk logic suggested they keep going straight without stopping. The next morning they didn't find the stench, nor the tank.

Another time, they found the stairs on their route flooded with blood. A darker shade spilling down the dark steps at night. No one else in sight. Just the blood.

"It must have been a goat sacrifice", Jim frowns. However, the two seemed more pious now, "It's not a good idea to mess with the goddess."

All this just across the road that bifurcates this pine forest from the slopes of the Hadimba Temple. The road from where I have entered a half an hour back. The one I can't spot now in the darkness at 7 in the evening. It's completely dark now. Not twilight like I was telling myself just 5 minutes back.

I look around and realise my imagination is quite potent. Did something move? Is someone standing there? I decide to make a move.

My phone has died on me and I have no torch. I must now rely only on my memory to find the gate and hope that no dark hand appears to grab my neck. My frail neck, with goosebumps on a joy ride up and down my spine.

I was out, of course, to write this. But it's only today that the fear I felt yesterday makes itself apparent as I try to relax under a blanket in a wind stricken hut in Batal (3,960 feet above sea level) after a bone breaking, spirit crushing journey past Rohtang Pass to the wind capital of Spiti.

More on that next time.