The grand canyon of India! 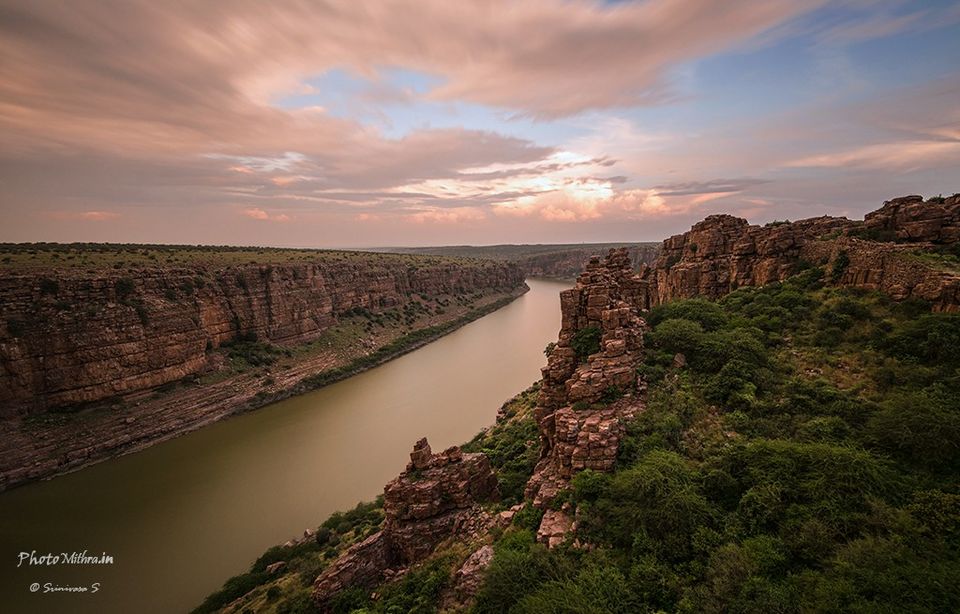 Having read about these places far too many times in the recent past, we planned a visit to Belum caves and Gandikota in mid November. Winter should have onset by this time and weather should have been very favorable – mostly clear skies, mild temperatures, late sunrises and early sunsets. But, in the two weeks leading up to the date of our visit, it had been raining almost all day long, everyday. Far too many low pressure cyclones waiting in a line, in the Bay of Bengal, pounding south India one after another – these kept us on tenterhooks. Counting down last few days to the visit, the weather forecast checks happened everyday and the forecast seemed to change everyday – bringing us cheer one day, only to shatter it on the next.On the day, we started early in the morning amidst mild drizzle and cloudy skies. As we progressed on the beautiful NH-7, past Chikballapur, weather seemed to improve and this got our hopes up.Our first stop was Belum caves. Weather was not going to matter much here since this is an underground cave complex. We reached the place by lunch time and we’d not had lunch. Our blog research had mentioned a decent restaurant inside the cave complex premises and we’d pinned all our hopes for a sumptuous meal on that. We were to be sorely disappointed to find it permanently shut. We found a place in the village outside the premises right opposite and it dished out a basic, yet amazing meal. After satisfying our hunger, we proceeded to buy tickets and enter the caves. After having encounted the archaic rules of no tripods at ASI monuments, we were not sure if tripod use would be allowed – guess what – they had no objection to the use of tripods. Excellent ????

The stalactite and stalagmite formations within the caves coupled with the eerie low key lighting offered some nice views. At places we had to proceed crouching since the roof was very low. At other places, we had to squeeze through narrow passages – a difficult proposition if you’ve carried all your camera gear and tripod. It was quite humid and somewhat airless the deeper we went inside the cave complex. So much of crouching and squeezing in a thin air, humid atmosphere saps the energy quite rapidly. Thankfully, at a few places (I counted 4), they have made shafts running up till the ground level, from where fresh air is pumped. We could see many people huddled around these areas to get some respite from the heat and stale air. The initial parts of the cave complex have wide walkways and tall ceilings and it slowly becomes narrower from all sides.The most picturesque part of the cave happens to be the most remote part of the cave, farthest from the entrance and also any of the fresh air shafts. It was extremely difficult to stand here even for couple of minutes – the humidity was killing and the air was very stale. It was here that, for our luck, we found other people spending maximum time taking selfies – sigh. After waiting for what seemed like an eternity, we managed to get some images without any selfie-frenzied tourists photo-bombing them. This chamber is said to resemble a banyan tree, with a single pillar resembling the tree’s trunk and the low hung ceiling with stalactite formations drooping down like the tree branches.

After Belum Caves, we headed towards Gandikota. We were to stay at the APTDC resort at Gandikota. The weather was still quite sunny when we started from Belum Caves. This got our hopes up of getting a nice sunset shoot. As we neared Gandikota, dark clouds which were hovering scattered, seemed to hatch a conspiracy against us. They started collaborating with each other, teaming and opening up loads of rain. The terrain became flatter and flatter. The last 10 or so kms to Gandikota was just flat lands cut by a solitary patch of asphalt, running in the middle of the landscape.

On reaching the resort, we quickly dumped our luggage in the rooms and headed out to see if we can shoot anything at all in the drizzling weather. The main attraction at Gandikota is the gorge on the end of the Gandikota fort. River Pennar flows 300 feet below in the gorge and this place is often labeled as “the grand canyon of India”. To get to this place, one has to enter the fort, cross a village that lies within the fort and reach vacant land in front of a mosque. A five minute walk from here takes us to the view point. We cross the ruins of Ranganatha swamy temple en route. We first wanted a view of “the grand canyon of India” – other places would be explored the next day. There were not many people, it was already 5:45pm and the light was fading fast. It was no longer raining, and the skies showed some signs of clearing up a bit. We spend almost half hour at the view point, but we were treated to only about a narrow five minute window where the skies showed some trace of evening colors.After this it got too dark and the skies turned grey and black soon. We retired for the night in the resort. Any hopes of stargazing at night were quickly shattered as the rains started again. We called it a day soon, hoping for a good early morning session. The next day, we got up nice and early by 5:30am and headed out to the gorge again. We were to be disappointed again as clouds and light rain played spoilsport.We wanted to finish exploring the other places of note – the Ranganatha swamy temple and the Madhavaraya temple. The Ranganatha swamy temple is in state of complete ruin and only pillar like structures still standing. However, from the temple complex, is a nice view showing the mosque nearby and the Madhavaraya temple gopuram in a distance. There are windmills also to be seen in the background. However, due to clouds and fog, those were not visible in the photos we took.We asked the villagers for directions to the Madhavaraya temple. We landed there only to find the temple gates locked. We almost started back crestfallen, but on a closer look, the gates were not locked – the fat lock was just sitting there, without locking the gates. The temple is also in ruin, but seemed to be in much better shape than the other temple. The main temple complex was without a gopuram, but the corridors around the temple were intact with all the pillars still standing. Again, not great weather here too – the light drizzle persisted.We did not have much else to explore and were also running out of time. We had to freshen up, have breakfast and head back to to Bangalore. A note about the APTDC resort – the whole resort is located quite close to the Gandikota fort and that’s what encouraged us to stay there. They are setup on a vast expanse of land and the rooms themselves seemed quite decent from outside. Stepping in, the lack of maintenance and apathy was evident. If only these government run resorts are better managed and maintained… sigh. Also, before ending this post, another note on the state of these monuments – like everywhere else in India, people visiting these places seem to have an urge to leave an indelible mark of their inner thoughts out for everyone to see for years to come – some leaving messages of patriotism, while others, more predictable declarations of eternal love. The laws governing rules around protected monuments seem to be truly archaic – some serious and rational rethink is needed.