View of temple from entry point of Road 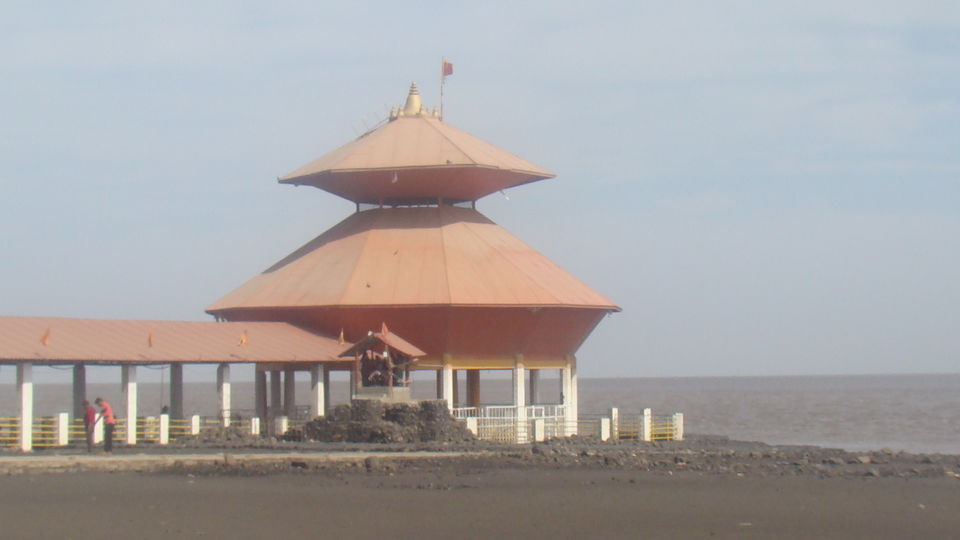 Shree Sthambeshwar Mahadev is on the shore of Gulf of Cambay in Jambusar Taluka of Bharuch district of Gujarat. The nearest village is Kobi Kamboi. This place is at almost equal distance from both Bharuch and Vadodara.

This beach is a pristine beach. One may find some fishing boats on this beach, apart from the Mahadev (Lord Shiva) temple. There is one Ashram near the temple. Evening and night is very pleasant at this place with total tranquility on most days excepting the day of Amavasya (No Moon Night), Purnima ( Full Moon night) , Shivratri and Shravan month as per Hindu calendar ( around July-August as per English calendar).

As per the local old villagers, Blogger talked to few of them, The Shiv Linga on beach within Tidal range is very old, which they had seen from their child hood and heard about from their seniors.

The local folklore and mythology, this Shiva Linga was constructed by the Engineers of Hindu Gods, Lord Vishwakarma and established at this place by Lord Kartiyaka, the elder son of Lord Shiva. He established as penance for killing demon king Tarakasur. There is a mention in Skand Puran of this place, which one of the holy books of Hindu’s. This is considered to be one of the oldest Shiva Linga in existence. Even discourses of Great Indian saga Bhrigu mentions about this place in Mahi Sagar. It is believed that Bharuch was established by Great Indian saga Bhrigu and Bhrigu Ashram still exists in Bharuch.

The Shiva Linga gets submerged in sea water twice daily as per tide table of the area. Darshan depends on tide timing. The largest tide comes on Amavasya and Purnima.

The existing temple was constructed at this place around 25-30 years ago by the organisation and Acharya ( Guru ji) who heads the Ashram here. Guru ji is called Bapa ji out of reverence. The Ashram operates a small school for traditional learning for young children and also gets them admitted in local Board school for doing their formal schooling, which will give them better future. Also the children are allowed to pursue some vocations. There are rooms available for staying there. Only vegetarian and Ashram cooked food are served in the Ashram. Visitors have to follow the rules of Ashram strictly. Advance intimation and reservation should be done for staying in Ashram in a complete pollution free environment.

One can see the bright stars in the sky with naked eyes, looks to be a good place for star gazing.

Mr Mayur Gandhi volunteers his services for upkeep of Ashram and he can be contacted on +919825097438. It is advisable send a SMS first before calling.

Visitors should consult the tide table before visiting this place.