India Travel GuideIndia TripsRann Out: The Dangers Of/ Tips On Long Distance Riding

Rann Out: The Dangers Of/ Tips On Long Distance Riding

I used to consider a 600 km ride a long ride until now. I was quite happy with myself as I completed my 1500 km ride to Kutch within 21 hours. I slept for only 4 hours in 3 days, and again left to come back to Delhi.
I didn’t get what I expected in the Rann of Kutch, so the  trip became more about the journey for me.That, because of the interesting things that happened, and the mistakes I made.

The evening next to Diwali I started my ride to Kutch. After a 21 hour ride I was in Kutch. Catching only 4 hours of sleep, I was on the road again.

I wanted to get a biking jacket mainly to be protected from the rain and the cold, and to look good.
It never hit me that I could get hit, so didn’t care too much about the protectors and armours on the jacket. Most of the good quality jackets available in India were going to be out of my budget, at about 15,000 rupees.
But then I heard of this super-amazing Ladakh 2.0 riding jacket by Biking Brotherhood Gears, which had all the important features like protection from cold, rain, had protective armours and looked extremely handsome, at less than even half the price.
The plan wasn’t so, but I also got to crash-test it real soon.

The longest rides I did before this were of 330 and 560 kilometres. Those rides were really painful and tiring. I saw posts on Facebook of people doing 1200 km in 24 hours, and my jaw used to drop wondering how they did it.

While my jaw was still dropped on the floor, I decided that I’m going to do the Rann of Kutch (from Delhi).
I braved the 1500 km to Kutch via Udaipur and Ahmedabad quite smoothly in 21 hours, took rest for 4 hours, and now (stupidly enough) I was on my way back home already.

Himani who was still in Kutch, and Masha who I dropped at Ahmedabad insisted too much that I stay the night at Ahmedabad, but I felt too inspired.

Soon after leaving Ahmedabad, the sleep angels tried to lock my eye shutters down.
I found a bench outside a closed dhaba, and realised how desperately I needed to take some rest. I found respite in it for a full hour, and woke up when I heard some people walking around me. I feared if I keep slee[ing, it wouldn’t take much longer before my stuff gets stolen.

I started again. It was still dark.
100 km from Ahmedabad, near Himmatnagar a car behind me started honking like a a maniac. I started tilting towards left to give him side, but looked like “ain’t nobody git time for that!”.
Yes, hurriedly he came from my left, and ticked my handle.
Like a rag-doll I went flying in the air. I tried holding on to the air as I flew, and then slid on the ground for a good 15-20 meters. It took a while for  the disoriented me to figure where I was.
I got up barely a step away from an iron pillar on the road divider. I realised how lucky I was to not hit any electrical pole, or the metal barrier or any stone or anything else.
It was completely dark, it took me a good amount of time to find my bike, camp and luggage.
The leg guards of my bike, fog lights, indicators and the silencer were broken. And about myself, just the right sleeve of my protective jacket was ripped.
I pulled myself together, and thanked my stars (which were the only source of light in that gloomy night), and started on the now very noisy and half functional bike.

My jittery bike was still doing the job just fine. But now sleep started to take the toll on me really bad. I stopped a couple of times and took some power naps on the way.
But then 25km before Udaipur sleep got too powerful on me to even allow me to park my bike.

The ‘SCRREEEECHHHH’ sound opened my eyes, and the next moment I was down on my all four.
And as I was falliing my thought in the milisecond was, “agh my second fall in 5 hours! This time probably its going to be game over for me. Or if I survive, my dad’s not going to let me travel again.”
Thankfully I wasn’t run over by one of the cars behind me after I fell. And also they did a good job avoiding running me over, and continuing to go like I were just a hurdle on the road.
I wanted to get up, but it felt like my bones had left my body, and stuck to the ground. By this time some passersby came and tried to help me up.
I saw my right arm had twisted completely. I slowly untwisted the arm with my left hand, while everybody looked on like I were performing a magic show.
I was then taken to the side of the road. It took 5-6 men to take me to the side. I thought I was going to faint. I asked them if they could get me some water. And an ambulance.

After taking some rest I started walking around. I felt much better, and good to go. I looked at my bike. I could see that the break wire and accelerator wire were broken, and the handle was completely twisted. Arghh!

I sat down with the new friends I made there in this little time. I joked around with them like I knew them since forever, while they managed to smile only sheepishly as they still couldn’t gulp the sight of the incident down.
They were very clear with the thought, “bhaiya waise aise accidents mein koi bachta nahi hai” – nobody really makes it out alive from such accidents.

But I have to admit that this high speed action also gave me the thrill of a lifetime.
It is stupidity. I could have died. I nearly died. I wouldn’t want to be in that place again.
But if I have to share the feeling from that time, it was scary and amazing to be thrown in the air at 120 km/hr.

The ambulance arrived.
I was taken to a hospital, which again sent me to the bigger hospital – Maharaja Hospital.
This government hospital took me for a surprise. The hospital was packed with a mad amount of patients, with only one doctor in each department. I thought I’ll never be able to get my work done here.
But the doctors did their work with a smile, and so much focus and affection, and the patients calmly waited for their turns. It was lovely to see how systematic it all was. My turn came soon enough.

I spoke with a transport company which would have picked my bike from the accident spot, and delivered it to my mechanic in Delhi.
About myself getting home, being so tired and with a fresh fracture and torn clothes I was in no mood to travel by bus. And no cab driver wanted to drive so far to Delhi.
So I caught a cab to Jaipur the same night, and asked the driver to use his contacts to arrange for a cab to Delhi from there. 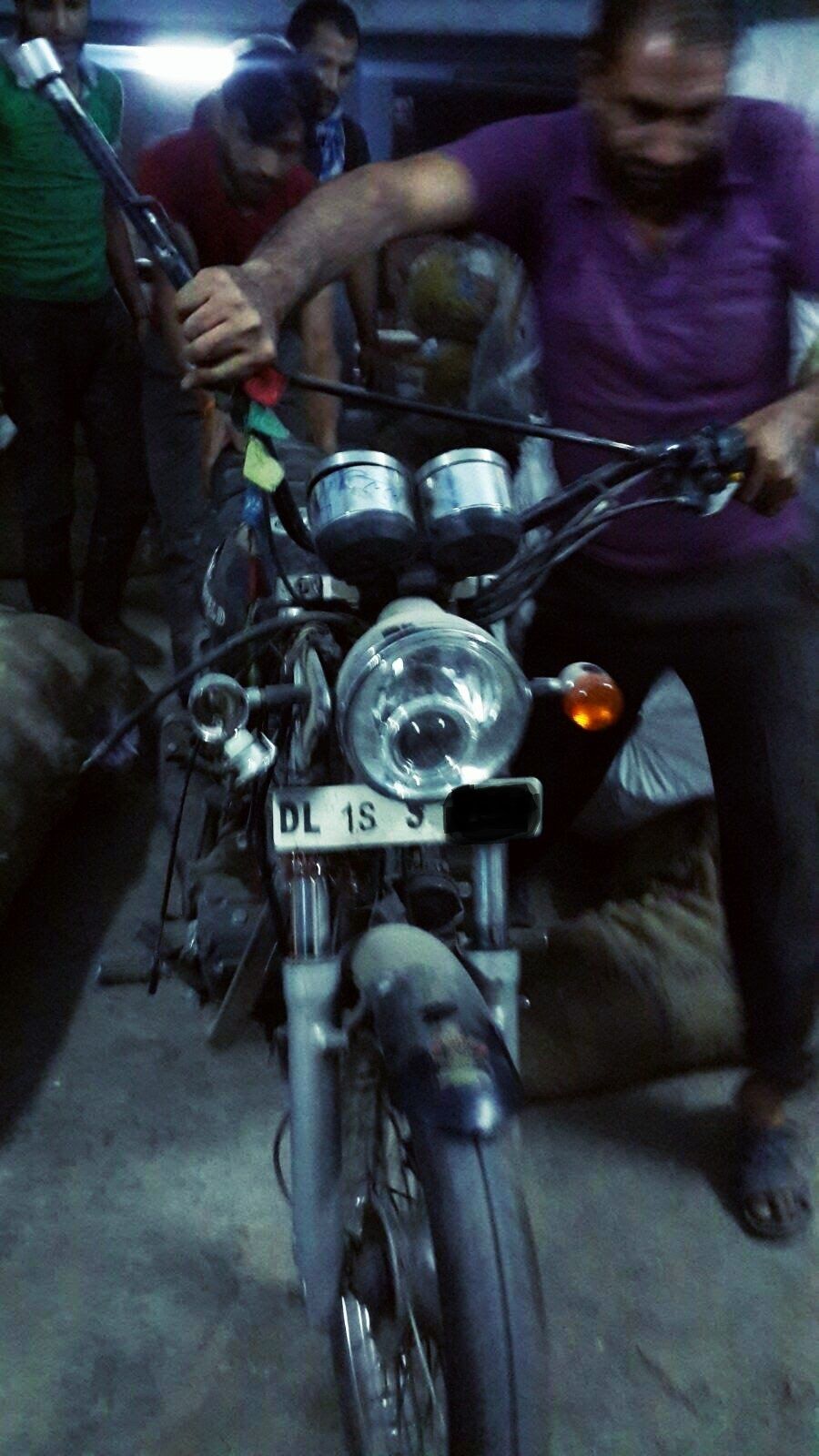 What I Did Wrong

1. Traveled without keeping myself hydrated

Drink water every 2-3 hours, you must! Keep yourself hydrated, also pop a little somethings to eat. Nuts if possible.
Stopping for water would have also allowed me to take little 2 minute breaks every 2 hours. I did that in the beginning, but later on got too carried away just riding.

I saw on news today how a car get totally destroyed and all the 4 passengers died on the spot, as the driver dozed off while driving. And I was on a bike.
I could have easily died. But nah, I’m not going to die so easy. I have stories to tell, and you have to learn how to not be a fool like me.
Many people don’t realise that it is a real problem in long distance driving. Please take a good full 8 hour sleep the night before the day you have to ride, and a power nap before you actually ride.
Don’t start a long ride the day you did trekking, or some other strenuous activity.

What I Did Right