The maha experience of the maha kumbh!!

So I asked myself again... Are you sure u wanna do this?

In zippy came my reply "Nooo!"

I turned to my parents and said, "I am not accompanying you guys to the Kumbh 2013. That is my final decision."

And then what I dreaded the most had started: the emotional blackmail. I could take all of that no more so I agreed to join them with little or no idea what awaits me there.

Now that I am back from the Kumbh, I feel it would have been the biggest mistake of my life had I not been there.

Once the Gods and demons decided to churn the ocean and share the treasures that would emerge from it. The most precious treasure was the "Amrit", the nectar. when God Dhanvantari emerged holding the kumbh(pot) which contained the Amrit, both Gods and Demons laid claims to it. the Demons didn't wish to take chances and snatched the kumbh hastily.

It was a known fact that the one who consumes the Amrit becomes Immortal and therefore all powerful and indestructible. Gods couldn't accept this. Hence, Lord Vishnu disguised himself as an enchantress (Mohini), and seized the nectar from Demons. While fleeing from the evil ones, Lord Vishnu passed the nectar to his winged mount, Garuda. When the demons finally caught Garuda, in the ensuing struggle a few drops of the precious 'Amrit' fell on Allahabad, Haridwar, Nashik and Ujjain. Since then Kumbh Mela is held in all these places every 12 years.

This year, I went there to witness the world's greatest religious event. To witness the massive gathering of people from all over the world who believe that one dip in the holy water will unleash them from the burden of their committed sins of all their past lives and the present one too.

The best way to get there would be via train. Enjoy the company of fellow Kumbh traveler's & devotees. We took the train called Duranto. It starts from LTT , Kurla @ 5.20pm and reaches Allahabad at around 12.30am next day. They provide 3 meals which are inclusive of the tickets cost.

Once you reach the station there are cabs which offer to drop you to the Kumbh city, charging you somewhere around 400Rs. The Kumbh city falls on the outskirts of Allahabad. The Mela stretches across 25kms on both sides of the river.

Massive right! It indeed is! A glimpse of which is right below. 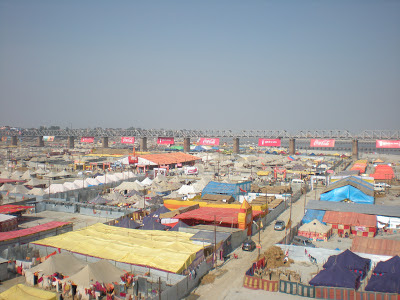 The Kumbh city is divided into a number of sectors. Starting from sector one which is closest to the river and as the sector number increases you move farther away from the river banks. Government allocates lands to various groups of sadhus depending on their strength and they in turn hire people to build tents and make water and electricity arrangements inside. A number of hotels have built tents there and provide accommodations with essential facilities. 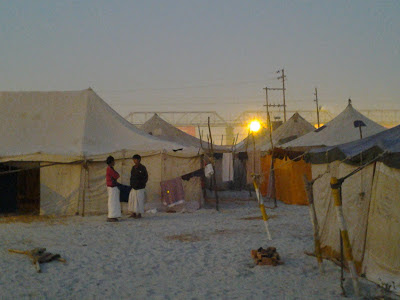 Allahabad is the city where Ganga unites with both River Yamuna and the invisible River Saraswati. This place of confluence of the 3 rivers is called the Sangam. Devotees go exclusively to the Banks of Sangam, to take the holy dip. If you wish to escape the crowd you also have an option of going to the Ganga Ghat.

In our 2 days of stay in the Kumbh, the first day we took bath in the Ganga River and the next day at the Sangam. Depending on the crowds, the security personnel's stop the transportations to the river banks at various points. At any cost you would have to walk atleast 3kms to reach the Sangam.

On the way to Sangam you will witness an overflow of Indian culture. Devotees hailing from places across the world, walk towards the Sangam with the faith and trust that the holy dip shall unlock the doors of heaven for them. Sadhus, Saints, common man and enlightened great minds, you will find all kinds of devotees under one roof i.e. the Kumbh city. 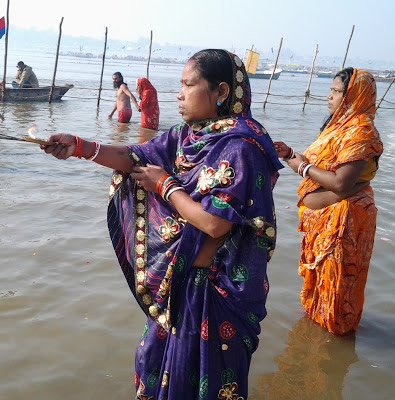 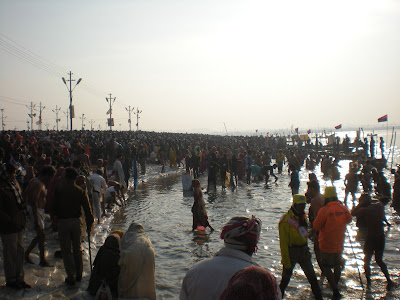 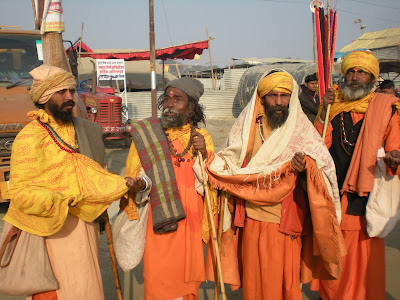 While walking toward the banks you will see kids dressed up as Hindu Gods. I found them extremely cute. Below is one of them dressed as Lord Shiva: 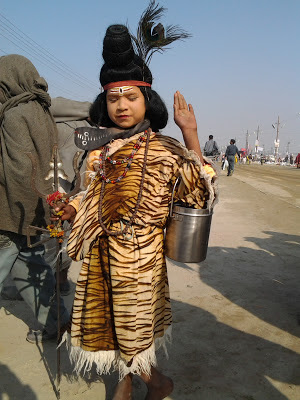 Once the sun sets, the city transforms entirely. The moon light falls on the sand and sparkles the whole Kumbh city. 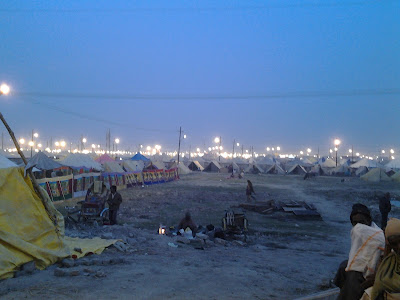 In the moonlit sky, go about exploring the city. You ought to find interesting events, places and people around. Our one such discovery was this Shiv Lingam made up of mercury. As you walk on the streets of Kumbh city, you find camps of the Naga Sadhu's. The Naga Sadhus are worshippers of Shiva and hold characteristics resembling to the features of Shiva. Their bodies are daubed in thick ash and they wear heavy coils of matted hair on the head. These saints remain completely naked all the time and smoke Marijuana through a pipe called a Chillum. They have given on all the materialistic pleasures. 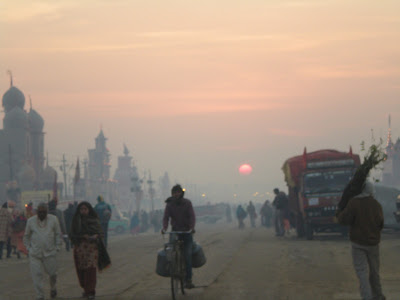 Last but the most important thing: Khaana !
Be it anywhere, a foodie like me hunts for scrumptious, luscious and mouthwatering food! So, even in the Kumbh I managed to find a spot at the intersection of sector 4 &5. There was this stall which served hot jalebi's, bread pakoda's , methi pakodas, bhajias and lot of more stuff! Not to forget with a khatti-meethi chutney to die for. A must visit stall at the Kumbh!

To conclude, I would just say believer or nonbeliever of the Kumbh. Take that leap of faith; Just like I did. To experience the biggest and largest religious event in world; to discover a world which is hidden in this small world! It's time to forget your apprehensions and plunge into the ocean of possibilities.