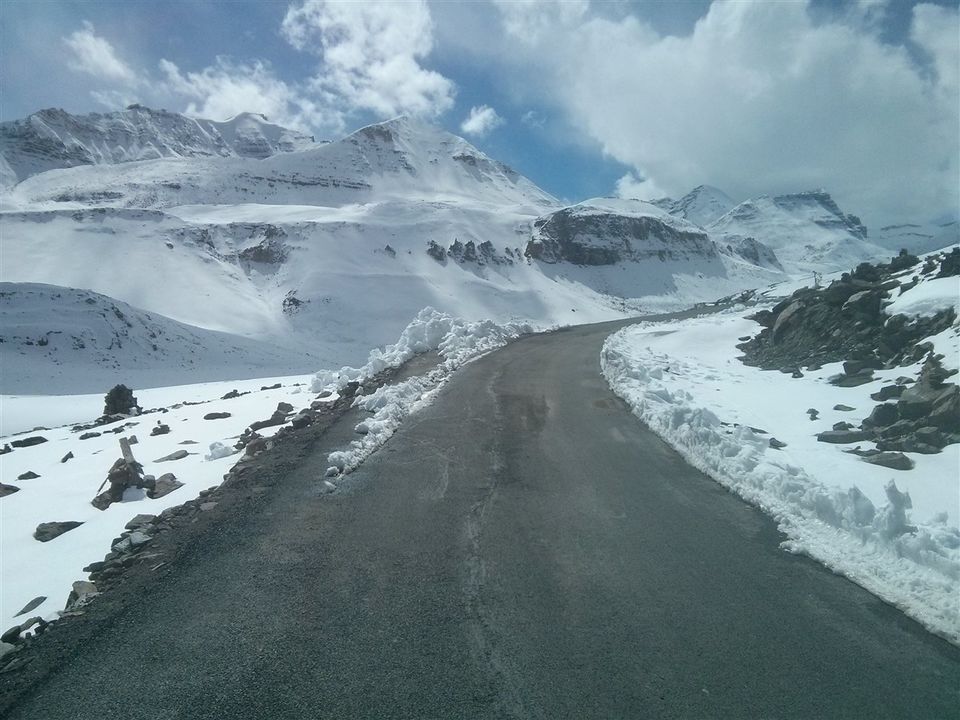 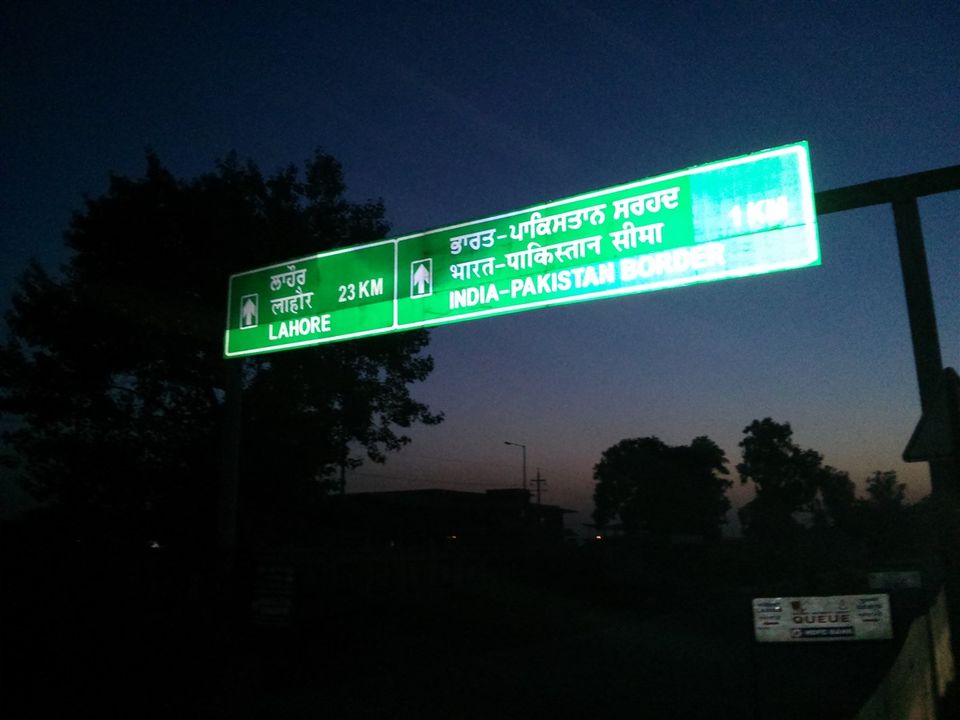 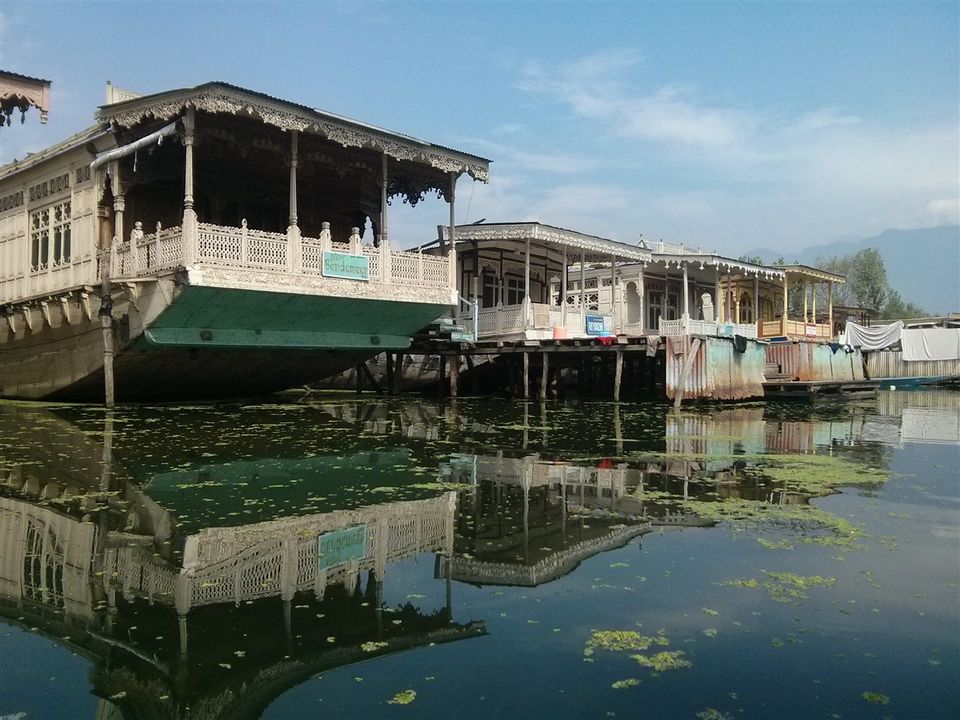 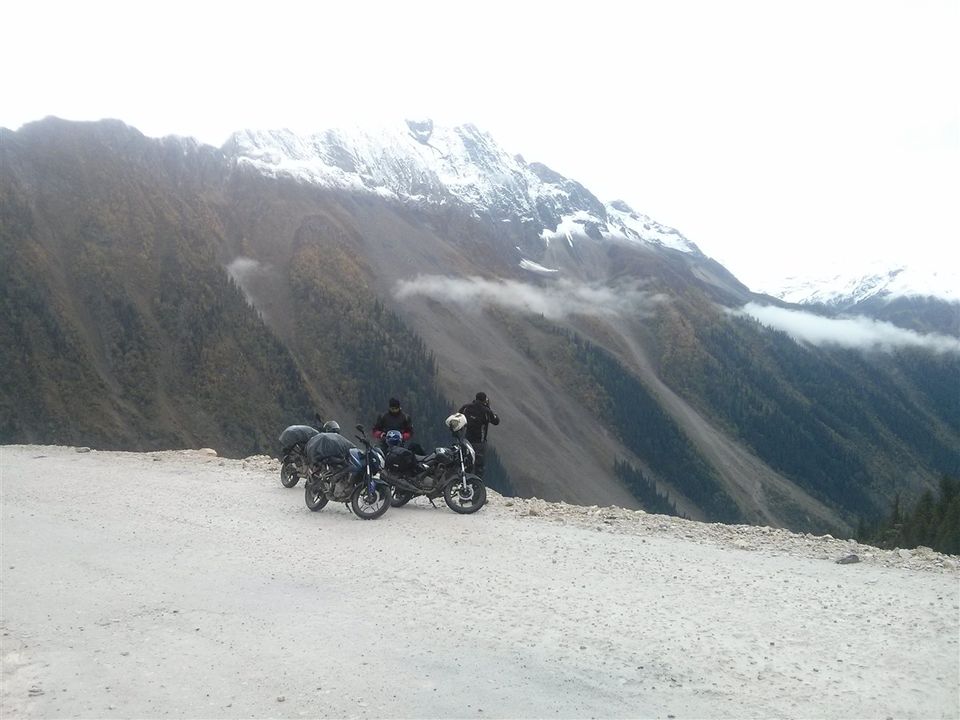 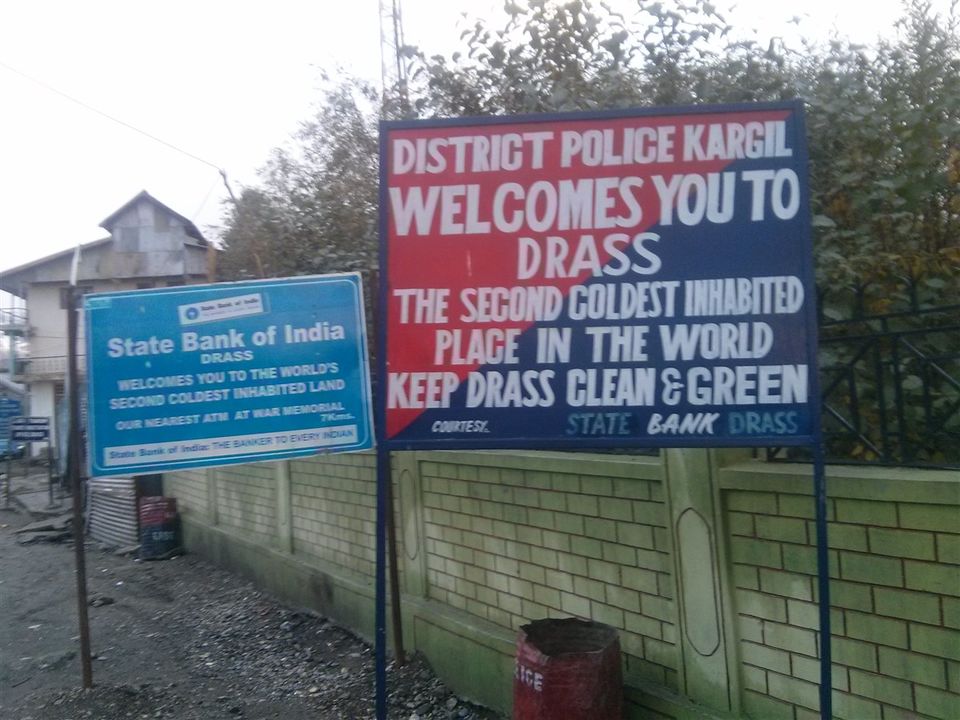 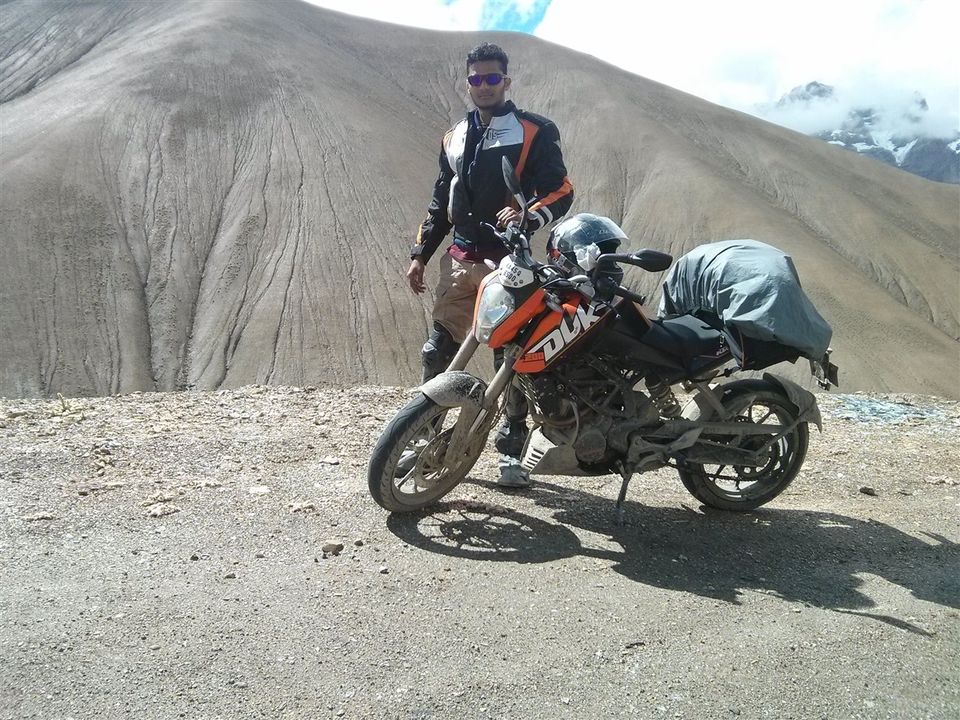 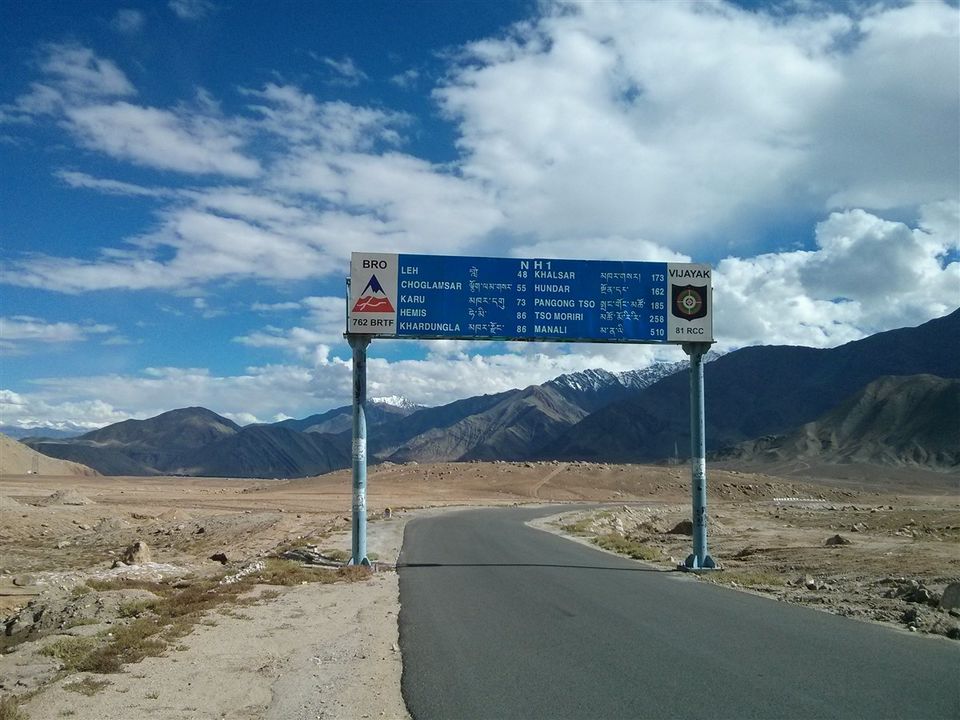 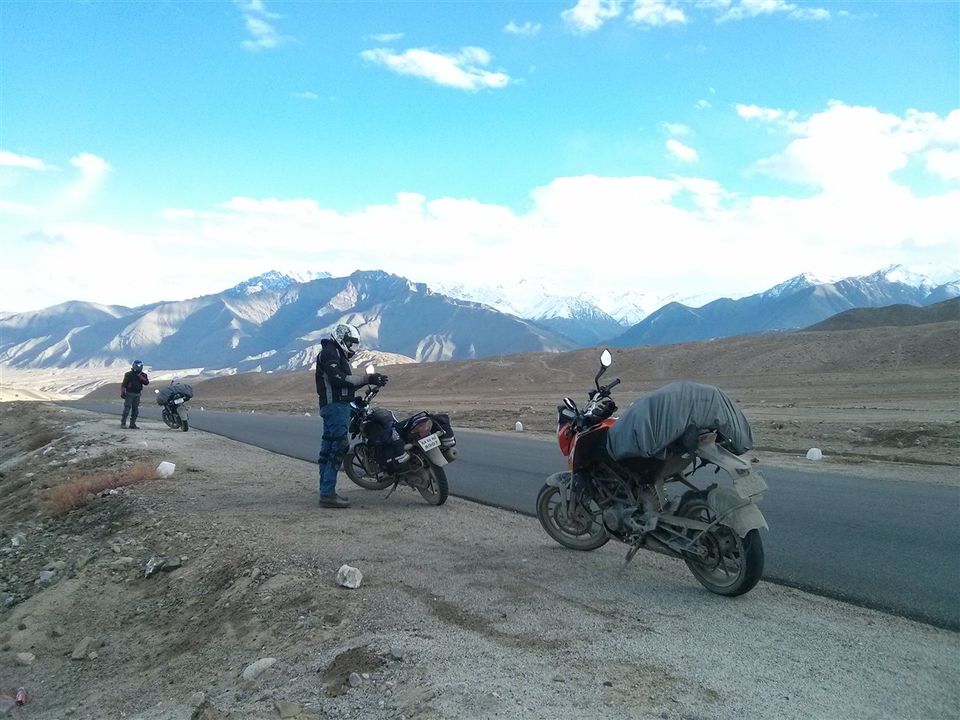 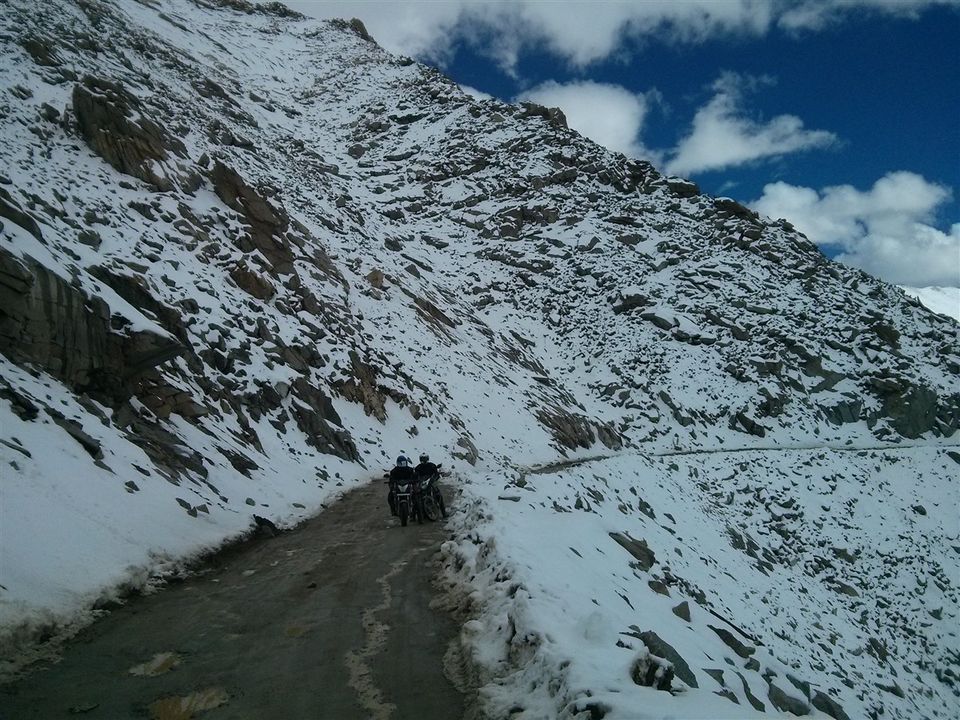 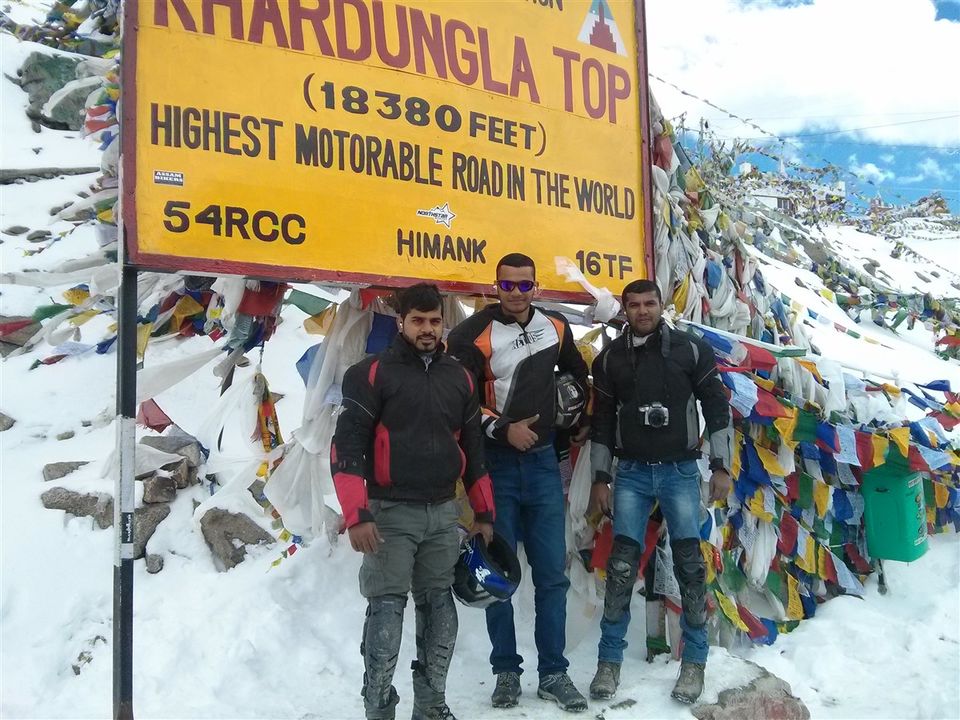 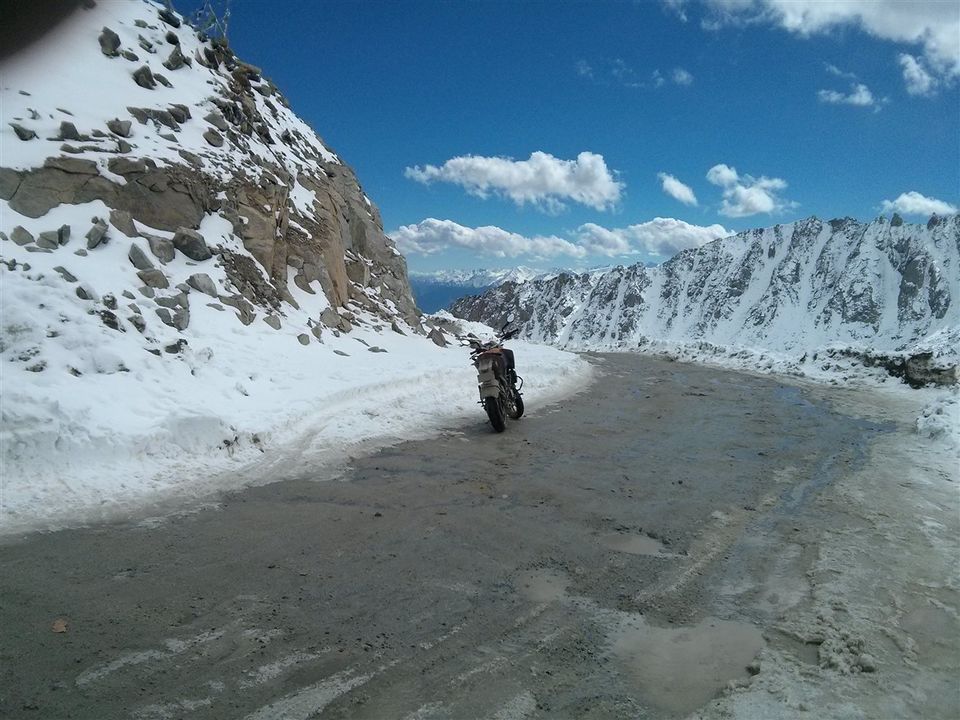 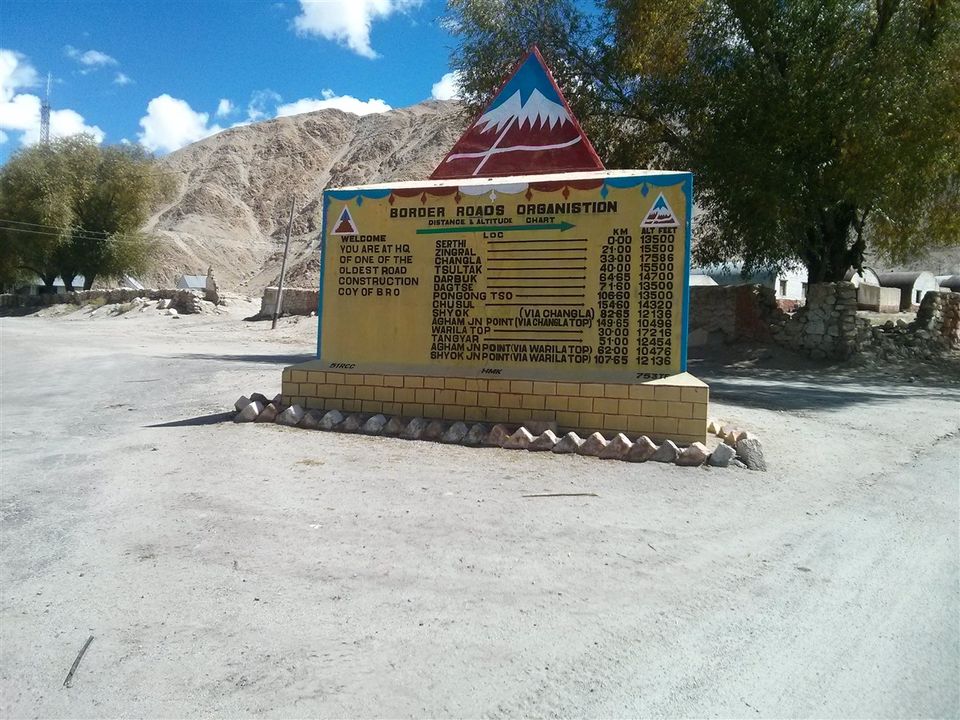 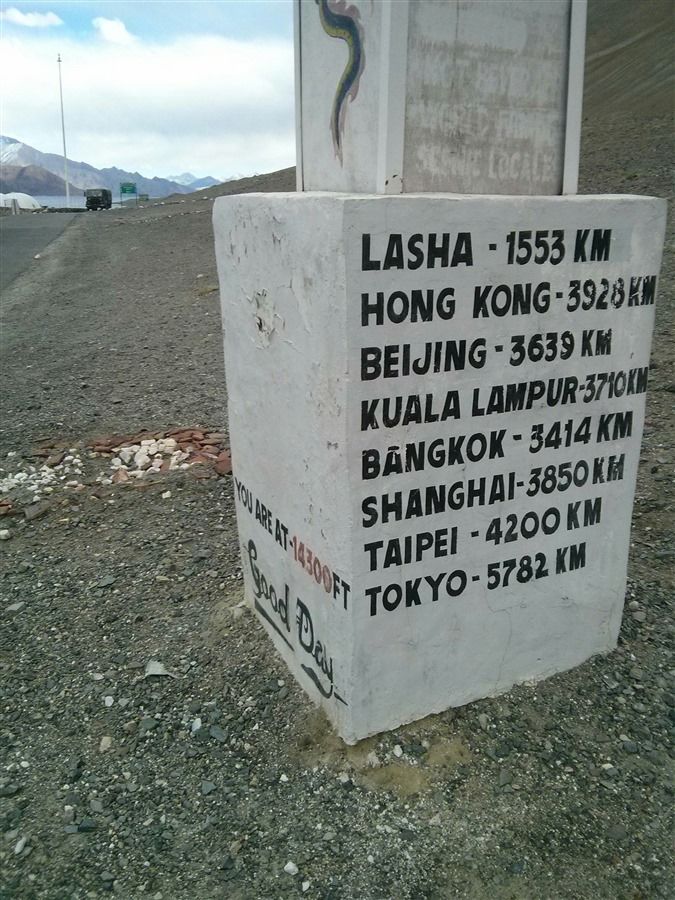 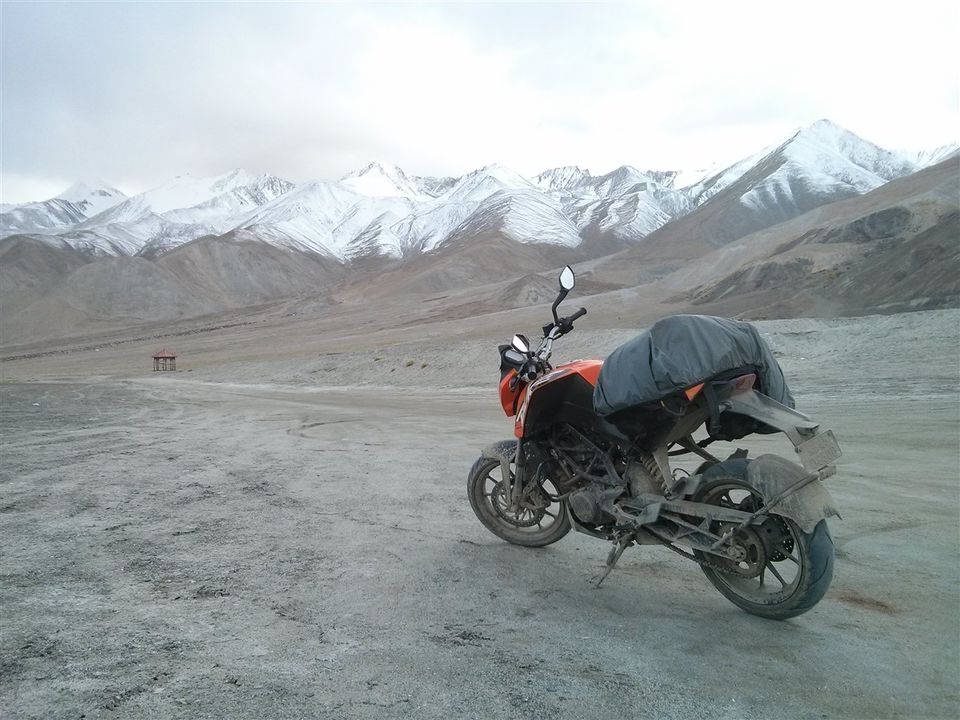 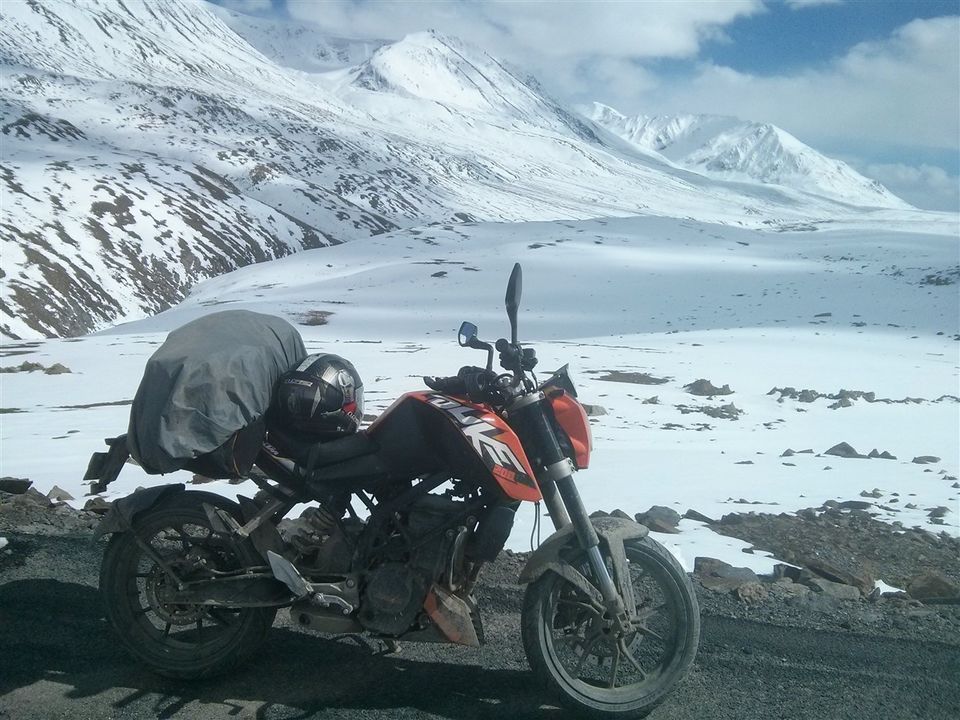 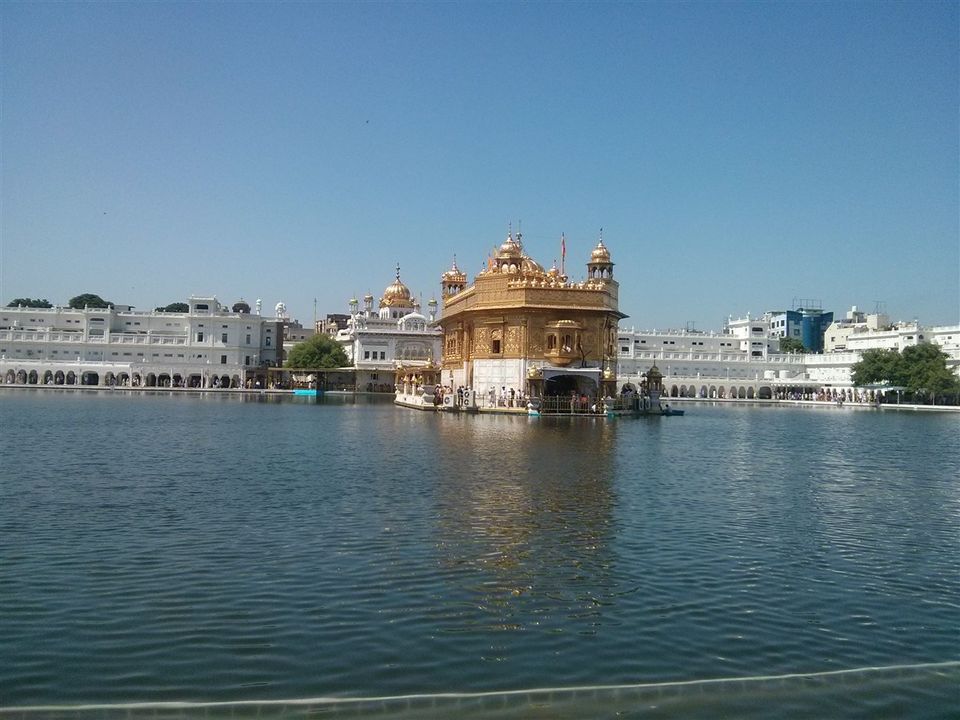 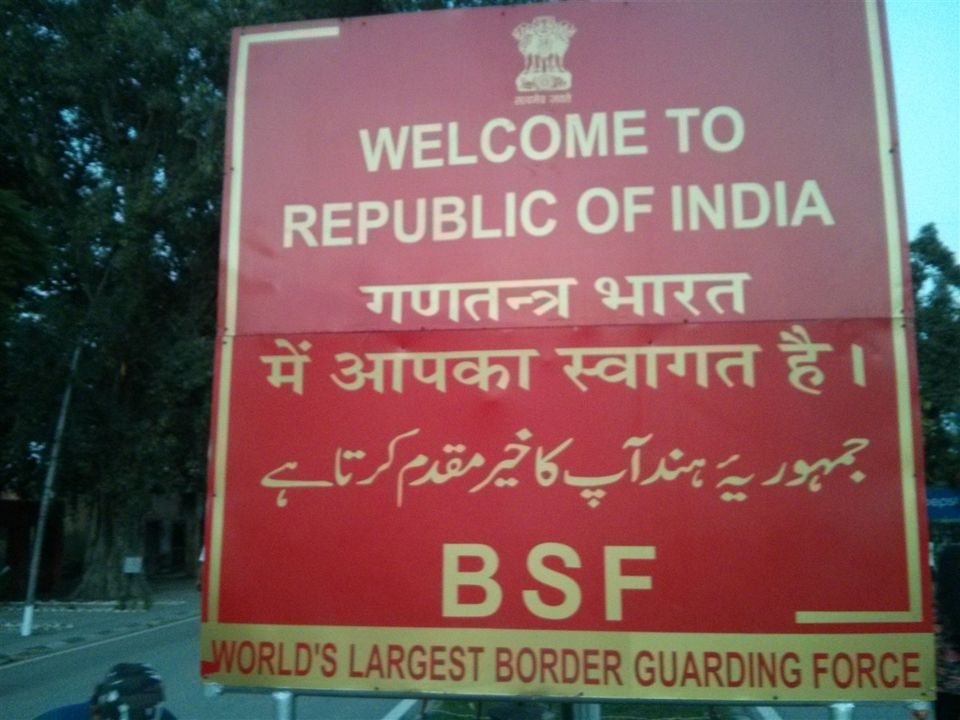 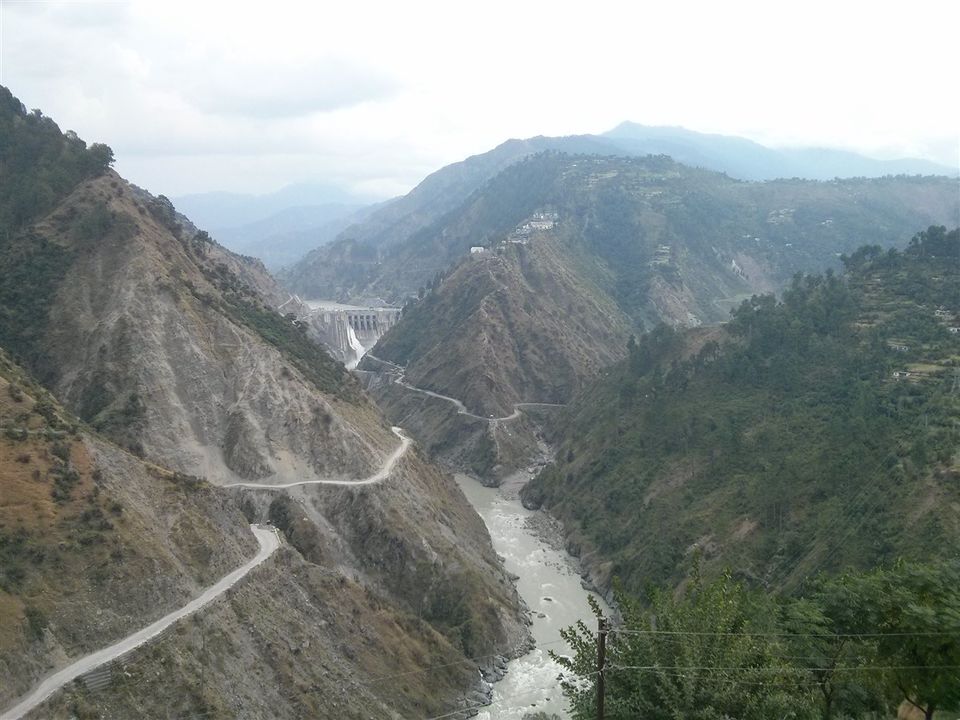 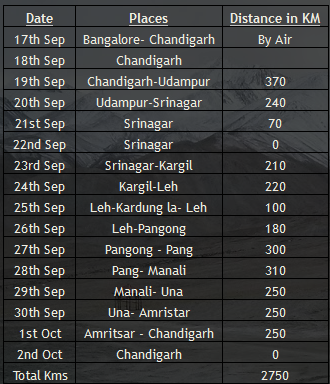 From freezing rain in Zoji la pass which I would rather call Godzilla, flat tire at night in world's second coldest place Drass, Frozen roads of Chang La and Tangala La(World's second and third highest motorable road on planet Earth), early morning snow in Pangong lake, altitude sickness at Khardung la(World's highest motorable road), hands and feet numb due to freezing cold at Pang, sacred Golden Temple of Amritsar, peak patriotism at Wagha Border are among the experiences we had during our ride to Ladakh, Kashmir and Punjab.

Few years back when I heard stories of people riding bikes to Leh and Ladakh region, I was totally amused by the idea of doing the same some time soon for which I had to plan and collect as much information required for the trip. Once I met a fellow traveler with whom I had been on a ride to the southern most tip of India, Kanyakumari we knew our next would be the show stopper ride to Ladakh, we started planing well in advance and set the dates for third week in September 2015 and we also decided to travel on our own bikes for attachment we had towards our rides. We could only find another two who were interested in this ride for this adventurous and challenging journey but one had to drop out due to other reasons. So we were three set to take the challenge on. The window we had for the journey was small, as the roads would be closed starting October or before that is based completely on unpredictable weather of this region. We have planned our ride at near beginning of winter instead of the most preferred time during summer(June-August), and it did not take for us to realize why it's suggested to go in summer, we did experience sub-zero temperatures in most of the places reaching up to -12°C to -14°C and God knows what temperature would it had been in the nights when we stayed packed inside the roof.

The most amazing part of this journey is not the places we visited but the soul lies in the journey itself. You cannot look for comforts here, nature is your comfort and beauty is your cuisine and local people are your family. The scenic beauty we came across cannot be described in any words, as we didn't know where to stop for photos cause all along the journey it was always beautiful than before and kept getting better. But don't be fooled by the beauty as it comes with a harsh weather and terrain. The weather was so harsh at a place called Pang we wrapped our sleeves with a blanket and two beds on top of blanket, yes you heard it right we used beds as blankets. In the journey we went across tunnels, deserts, snow covered peaks, roads, no roads at all the La's(Ladakhi word for top like Zoji La, Rohtang Pass etc). We went across green fertile Kashmir valley, to high desert Leh, Sand dunes at higher altitude, snow covered peaks, frozen roads, frozen lakes, frozen rivers and streams, valleys, civilization at most toughest terrain where people stay indoors completely for 6 months in winter stocking up food, medicine and even the smallest of things like match box. This definitely is mecca for every biker out there.

You would come across may obstacles and challenges which you need to face and overcome with optimism. A few of them we had were rain in freezing temperatures at Zoji La pass en-route to Leh from Srinagar was worse since we did not have winter riding gloves and we had summer leather riding gloves it made matters worse, hands were going numb soon after riding for 5-10 minutes in temperatures below zero when we were drenched in rain hands started burning as well. A flat tire at 7:30 in night on the way to Kargil near Drass when temperature was -4°C is every rider nightmare but we were helped by the nicest Kashimri people, getting the flat tyre fixed and helping us get warm and cup of tea all for three unknown strangers without we asking for any help, this is why you need to travel to find these amazing people who do not expect anything in return and help people unconditionally without considering people religion, caste, ethnicity, state etc. One of my travel companion had one or two moments where he just wanted to give up and did not go any further due high altitude sickness after ride to Khadung La (World's Highest motorable), but he didn't, we stuck together as team during those times. Carrying fuel to Pangong Tso as you wont find any for 350Km. The deadly Rhotang pass where the road was muddy up to knee high and terrible terrain. Narrow roads at high altitude. all these may sound dangerous, but once you overcome all these the sense of accomplishment is something to cherish for ever. Would I want to do this again? Definitely "Yes", with this experience I can be better prepared for the next time and enjoy it even more.

Number of Travelers: 3
Number of Bikes : 3

Picture tells a thousand words but video shows a thousand pictures, the real condition of what was happening in the ride i have tried to record with my not so good phone front camera but does help to watch it and smile at myself.

This trip was originally published on Travel Around