Stories from Russia - Layover in Moscow

Inconsistency, lack of direction, fear of commitment, whatever you attribute it to, the urge to flee from monotony is real. And for those who are born with it, suppressing the constant fire in their belly comes with a price - one they end up paying with a subtle element of truth in their hearts. Individuality often gets compromised in a frantic attempt to overpower the natural disposition of the body and the mind. Happiness is thrown into jeopardy when the inner self is denied the right of expression. Material success and ego indulgences tumble down in the face of spiritual decay. Something deep inside yearns to be set free, something as intangible as the earthy scent of petrichor. And when no goal seems worth the sellout, they muster the courage to go in search of the paradise long lost.

The opportunity to become an AIESEC intern in Chelyabinsk, Russia came to me at such a juncture. The city located in the Ural region is the seventh largest in the country. Russia is notorious for many reasons, and being the coldest country on the planet is just one of them. Chelyabinsk captures the essence of the cold and rustic life in the mountains. After my Pilani days, I hadn’t experienced anything even remotely comparable to winter. So the thought of surviving in a land where the temperature drops to -4o degree Celsius sent a shiver of curiosity down my spine. Digging out the warm clothes from my college rucksacks, I felt the excitement of breaking the shackles of drudgery – just what I yearned for at that point in time. I needed a change and this was it – my well deserved break after juggling between two crazy jobs, taking care of my little dog and fighting with my folks day in and day out.

Once I had the invitation letter in hand, the visa application process was easy. Unlike the US and UK visas, the Russians did not interview the candidate. You just need to fill out the online application form and personally hand it over to the embassy along with the fee and the required documents. I resigned from both my jobs in September 2014, visited my fiance in Bombay, attended my best friend's wedding and then proceeded to Chennai for the visa processing. The Chennai trip gave me an inkling of the solo adventure I was on. After dropping off the documents in the morning, I loitered around the heritage city. Walking in and out of fancy malls, watching movies all by myself and getting lost in translation, I realized it was indeed fun to be anonymous in a big city. I collected my visa on the third day and boarded the train back to Calicut.

My onward flight from Delhi to Moscow was booked via Aeroflot, and I had a fifteen hour layover in Moscow before proceeding to Chelyabinsk. After four days of obtaining the visa, I took a morning train to Kochi and flew to Delhi from there. At around 11:30 pm, I arrived at the Indira Gandhi International Airport in New Delhi. I waited all night for my flight to Moscow. Though the travel was exhausting, my experience with Aeroflot was quite pleasant contrary to the widespread negative reviews about the airline. The food was scrumptious too. Upon my arrival in Moscow, I was asked to wait at the immigration desk until an officer confirmed the credibility of my documents. He checked my readiness for the oncoming Russian adventure by asking, &quot;Are you not afraid of traveling alone in Russia?&quot; I replied that I was not and he let me pass.

My connecting flight was at 11:30 in the night. Fifteen long hours lay ahead of me. Thanks to Tripadvisor.com, I knew exactly what to do during my transit. First off, I exchanged the dollars in my wallet. Since they don't trade rubles in India, I was carrying all my cash in dollars. After leaving my luggage in the storage room, I freshened up, gobbled some home-cooked samosas and got out of the airport. The bus station was a few yards to my right. It was autumn and the temperature outside was 4 degree Celsius. Do not be mistaken, that is warm by Russian standards. Not wanting to take a chance with the weather, I pulled out the woolen gloves in my waist pouch. In a few minutes, I was on bus #851 going to Rechnoy vokzal (River Terminal), one of the two metro stations closest to Sheremetyevo airport (SVO). The other options to go to Moscow from Sheremetyevo are the Aeroexpress rail link and the prepaid taxi service available at the airport. For quick reference, I had downloaded a map of the Moscow underground stations onto my phone. To get to Red Square, I had to follow the green line to Teatralnaya station, adjacent to the world famous Bolshoi theatre. I bought a single ride ticket for 50 rubles. Despite being the capital city, Moscow is one of the least tourist friendly places in the world. Not a single sign was in English. I soon got accustomed to viewing the signboards as complex pictorial codes I had to decipher. The escalator going down was intimidatingly steep for a first timer. The subway was pretty much the western counterpart of the Indian metro when it came to numbers. However, the commuters were strikingly fashionable, restrained and frigid in the way they conducted themselves. The announcements inside the metro were painstakingly difficult to comprehend. Men and women bustled up and down, with single-minded focus on the rigors of routine. And there I was, estranged and out of place, attempting to find my place in an alien world. 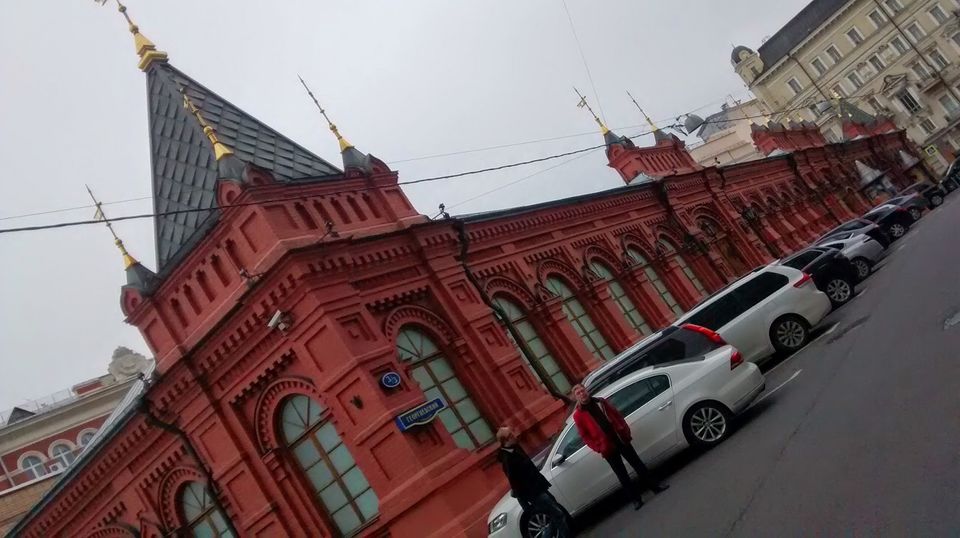 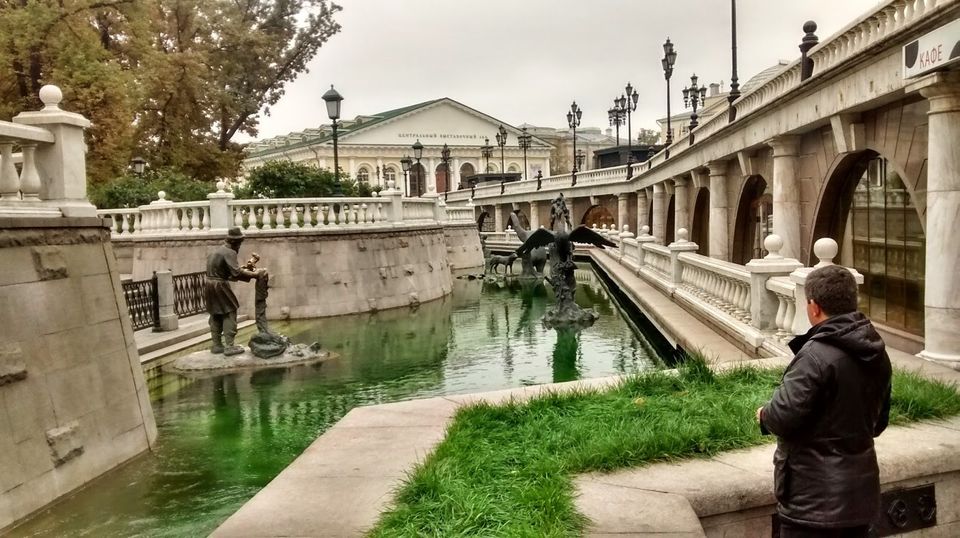 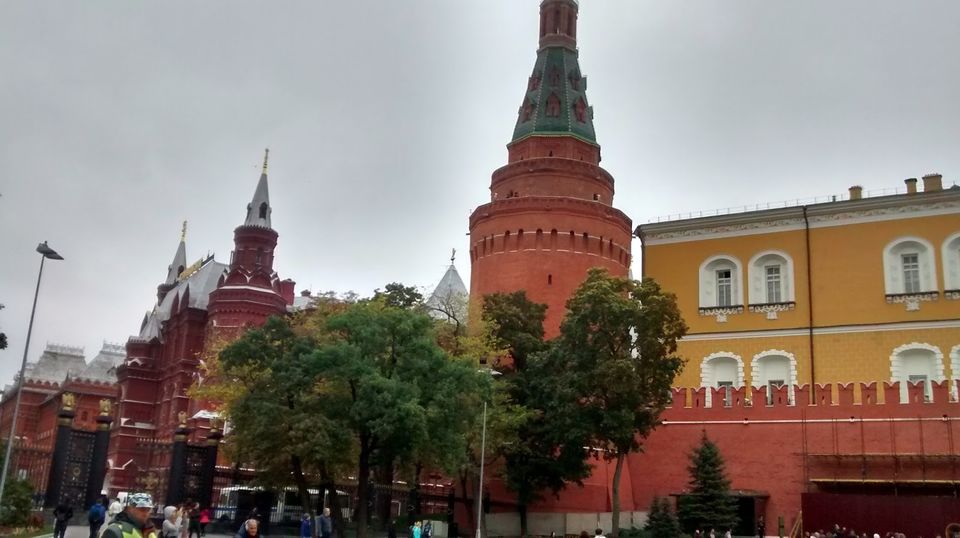 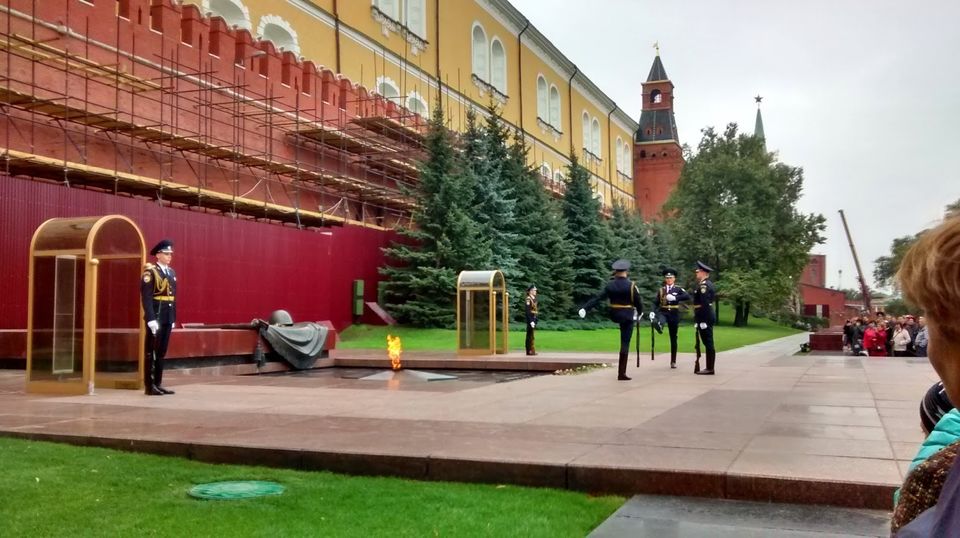 Teatralnaya station was remarkably beautiful with crystal chandeliers, marble walls and relief designs. I walked out and found myself in front of the Bolshoi theatre. The red towers of the Kremlin were noticeable from a distance. A young Ukrainian lady guided me to a subway opening out to Red Square. In the hours that followed, I walked past the historic towers and monuments within the Moscow Kremlin, the official residence of the President of the Russian Federation. There was a golden star at the helm of Troitskaya tower overlooking Alexander Gardens. The prominent clock in the center of Spasskaya tower called the Kremlin Chimes designated official Moscow time. Luckily, when I arrived at Lenin's mausoleum, a military parade was in progress. I tried to capture everything on my mobile camera which had become my travel partner by then. The intricately crafted domes of the picturesque Saint Basil's Cathedral looked like it came straight out of a travel portal. Modeled after the rising flames of a bonfire, this structure has no parallels in Russian architecture. The other noteworthy church in the vicinity is the golden-domed Kazan Cathedral. The most striking building in the Kitay-Gorod area is the GUM shopping mall. This landmark edifice used to be a state department store before getting privatized. The luxurious interiors of the mall and a bevy of indulgent shoppers testified to the high standards of living in one of the most expensive cities in the world. I ambled along the corridors of the mall, marveling at the visual delights and relishing a cone of cherry ice cream. Ironically, I felt liberated in the dangerous land of mafia and drugs.

Late in the afternoon, I returned to the airport. Coming back wasn't that simple though. Seated inside the metro, I got a strange feeling that I was moving in the opposite direction. A few stops down the line, I was darn sure that something was wrong. I got off the train and boarded the one moving in the other direction. It still didn't feel quite right. I kept going back and forth a few times before ascertaining that I was indeed headed towards Rechnoy vokzal. For those wondering why I did not check with a co-passenger, yes, I tried asking. But all I got in return was a blank stare. Once I got off the metro, it was easy to spot the bus to the airport. Then again, I was confused between the terminals and ended up walking a bit before jumping into another bus. Eventually, I reached my terminal a little after six.

I pulled an empty trolley from the side and waited near the elevator to go to the storage room on the ground floor. A flight had just landed and many people waited alongside me with their overloaded trolleys. At that time, a member of the ground staff walked upto me and yelled in a rather scrappy tone. Taken aback by his hostile manner and lost for words, I gazed back with my mouth half open. He barked at me and darted off, snatching the trolley away. That was probably the worst experience I had during the three months I stayed in Russia. Anyhow, I got my bags and checked them in a few hours later. As I struggled to stay awake at the boarding gate, a couple beside me smooched away, whispering sweet nothings into each other's ears. When it was time to board, the staff made an announcement in Russian. Without much thought, I stood in the longer of the two queues that formed in front of the boarding gate and made my way out of the Russian capital.

This blog was originally published on 'Travel Memoirs' 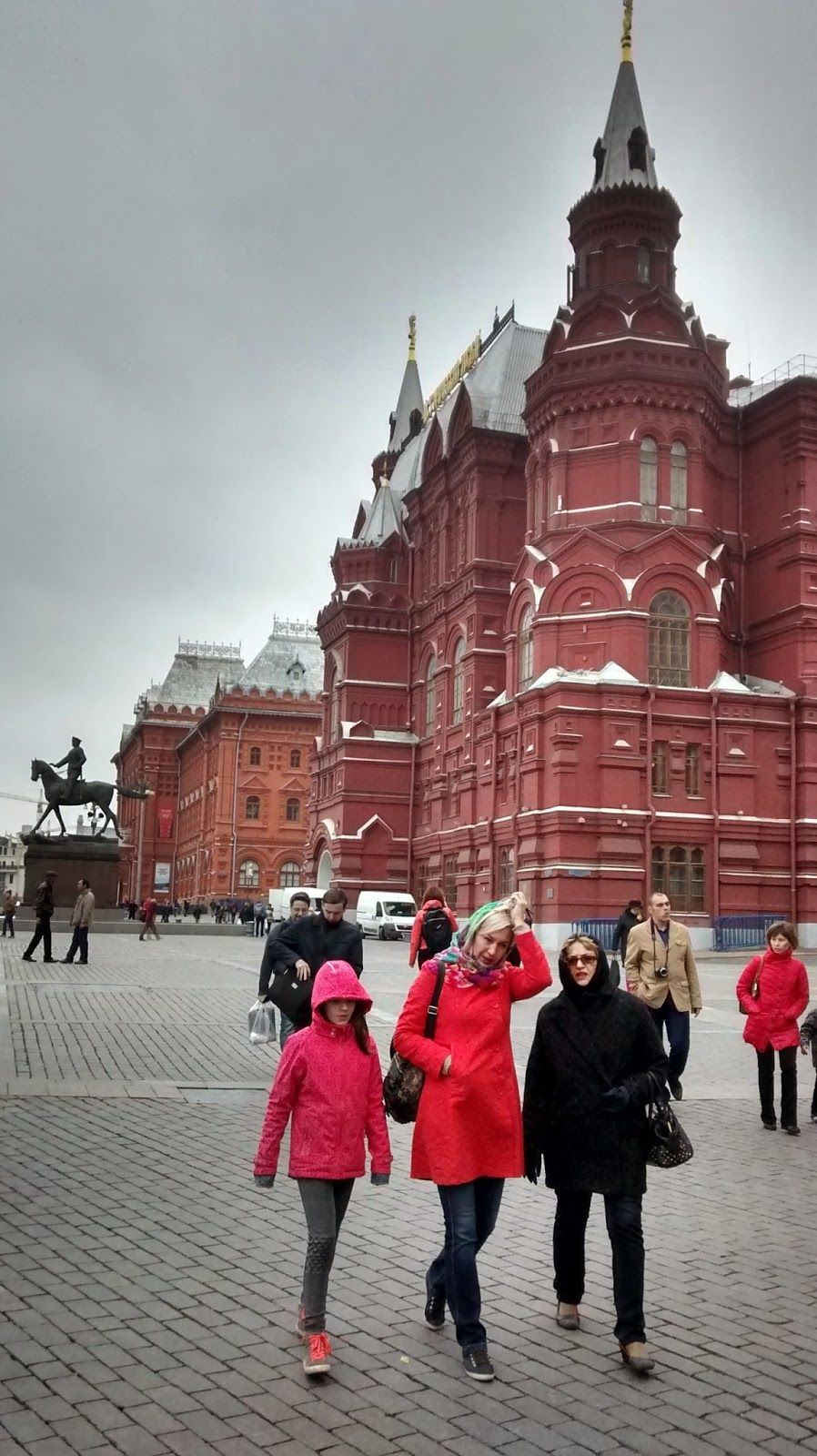