Camels have all the right to rest. 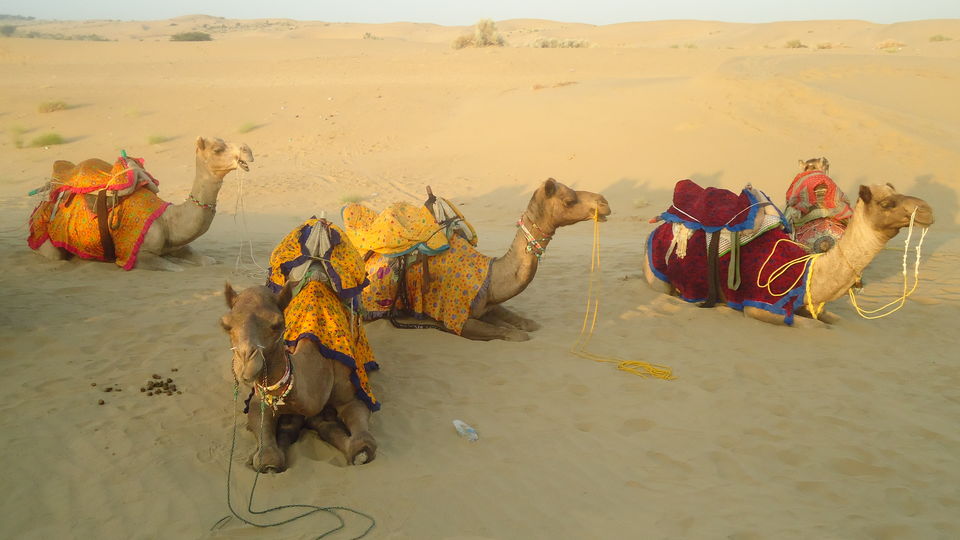 Someone captured me capturing. 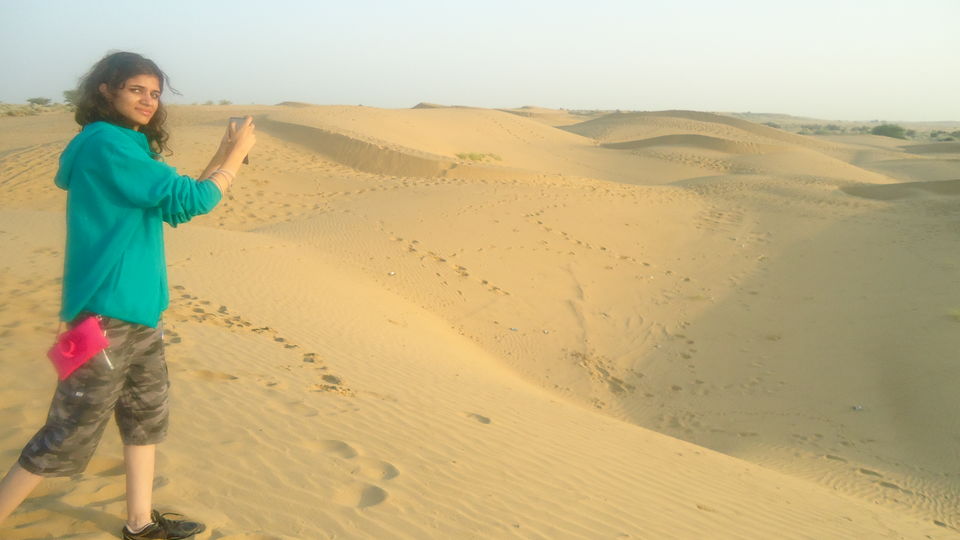 From the outside, the Jaiselmer fort 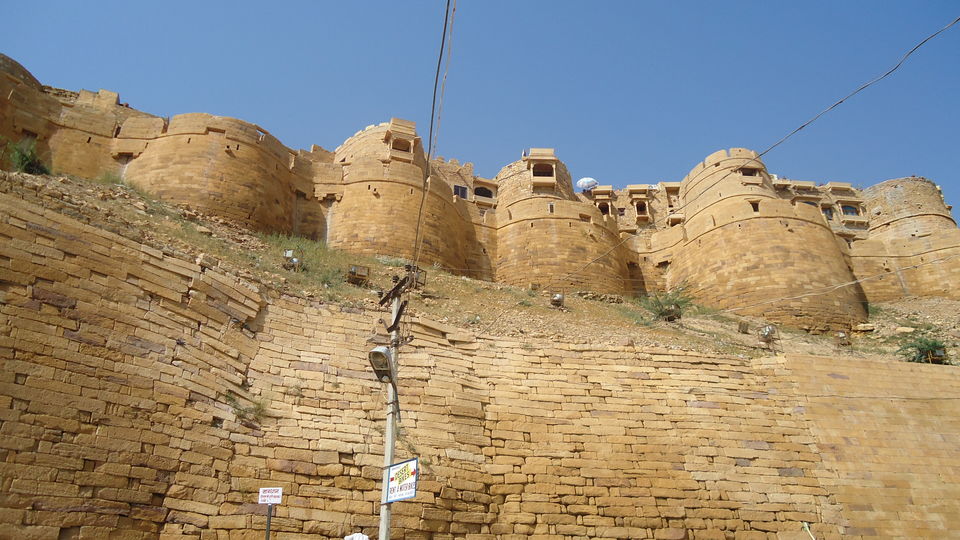 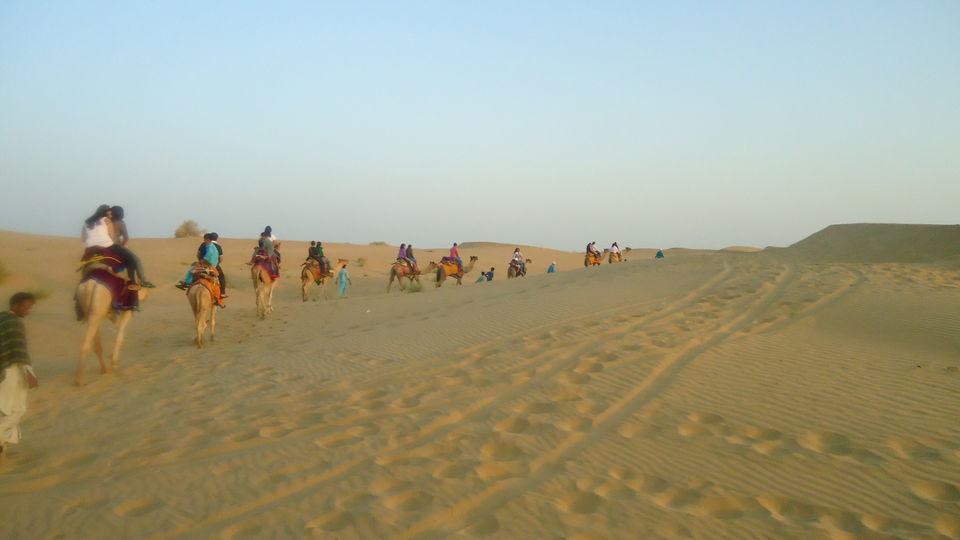 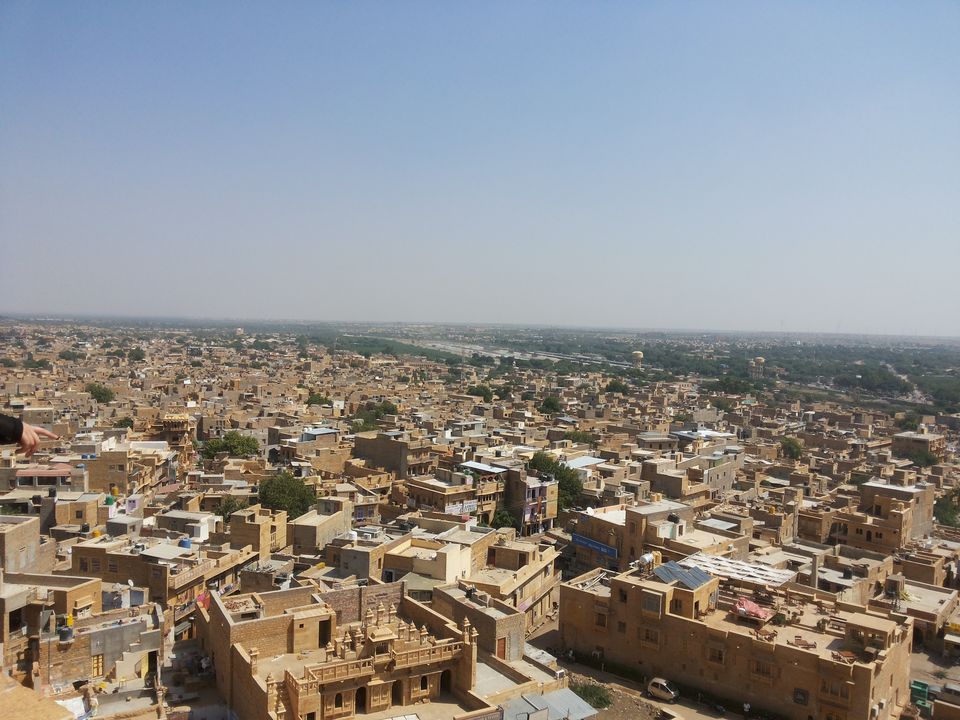 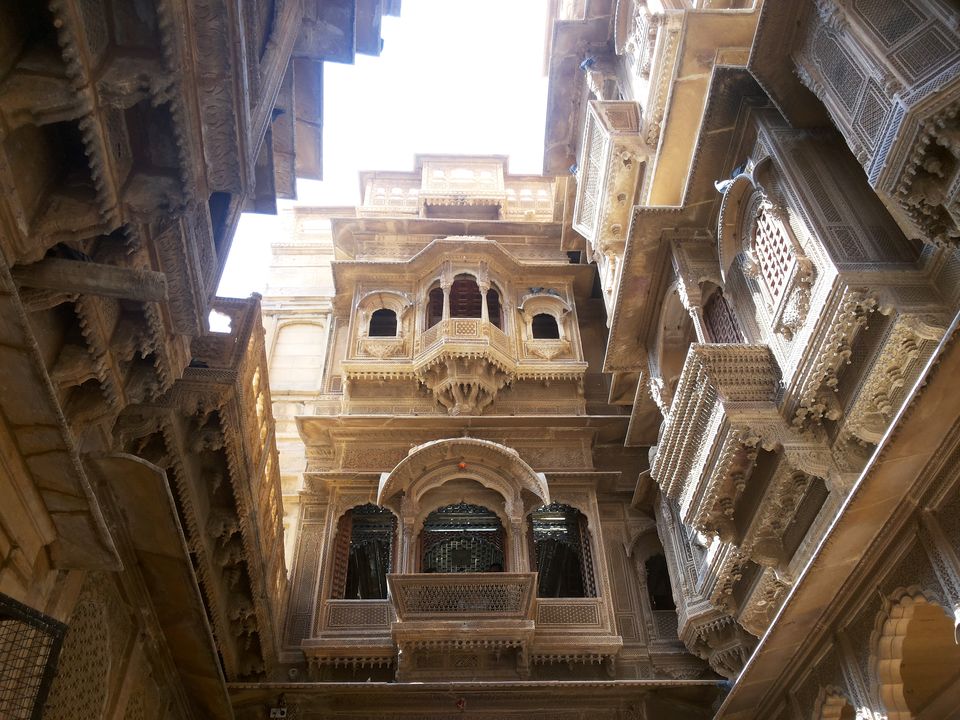 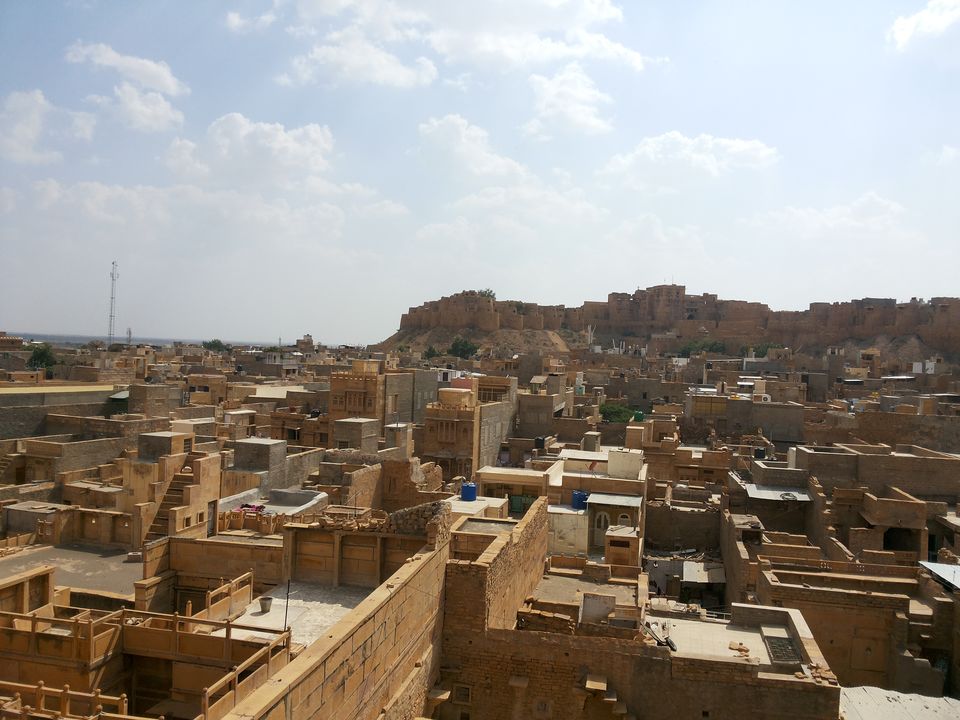 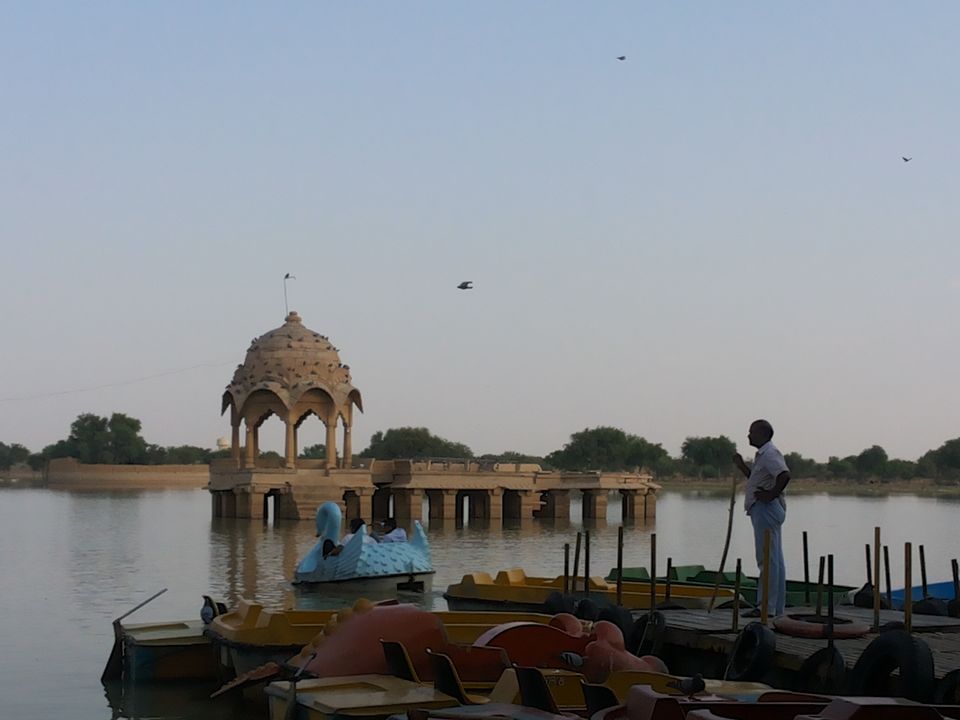 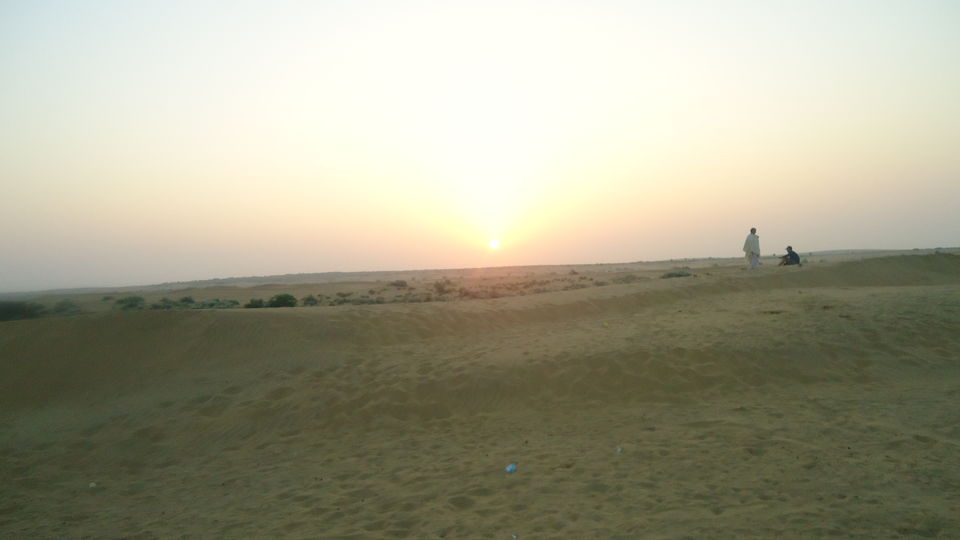 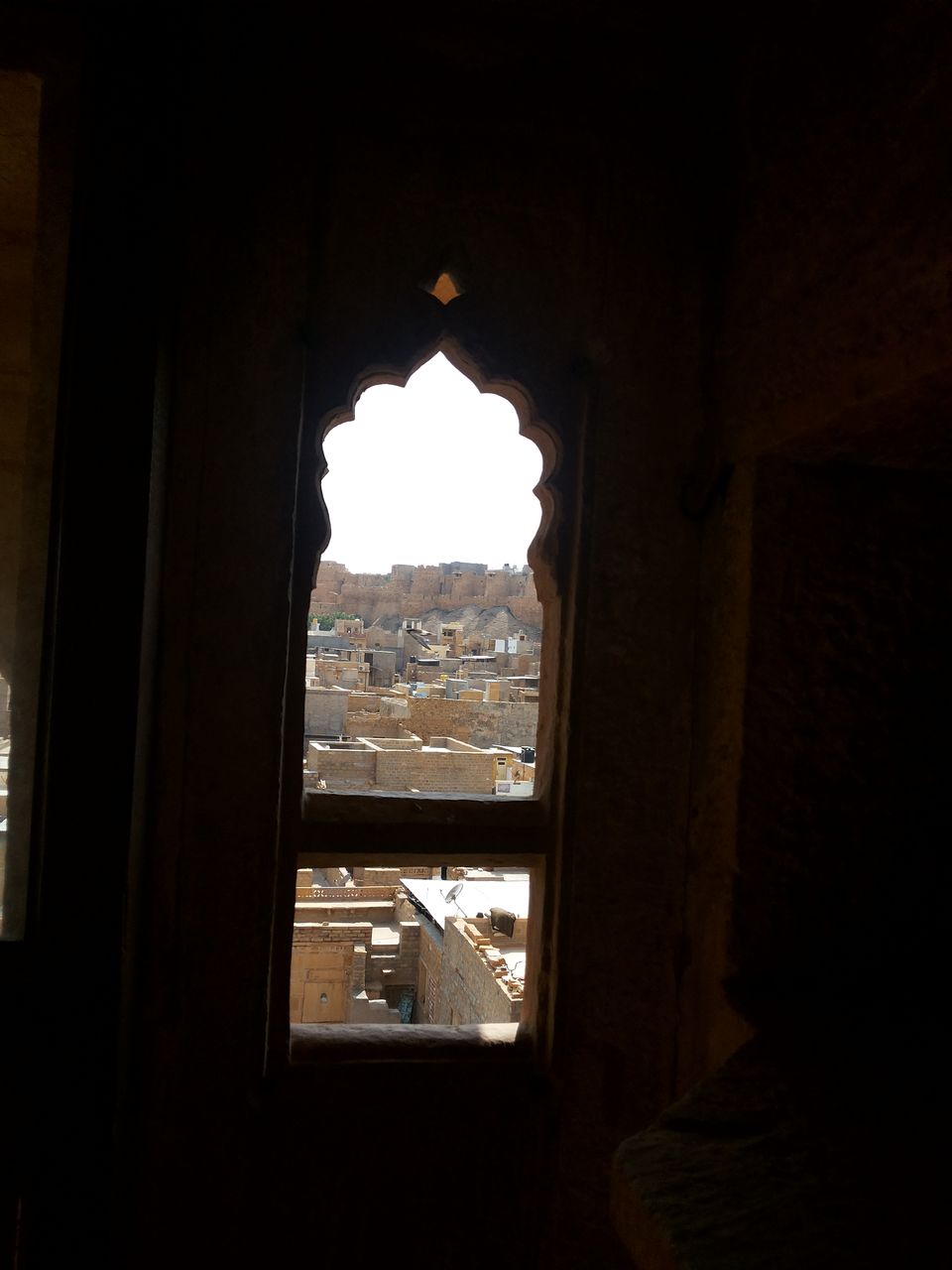 The Beautiful Hawelis will make you pose. 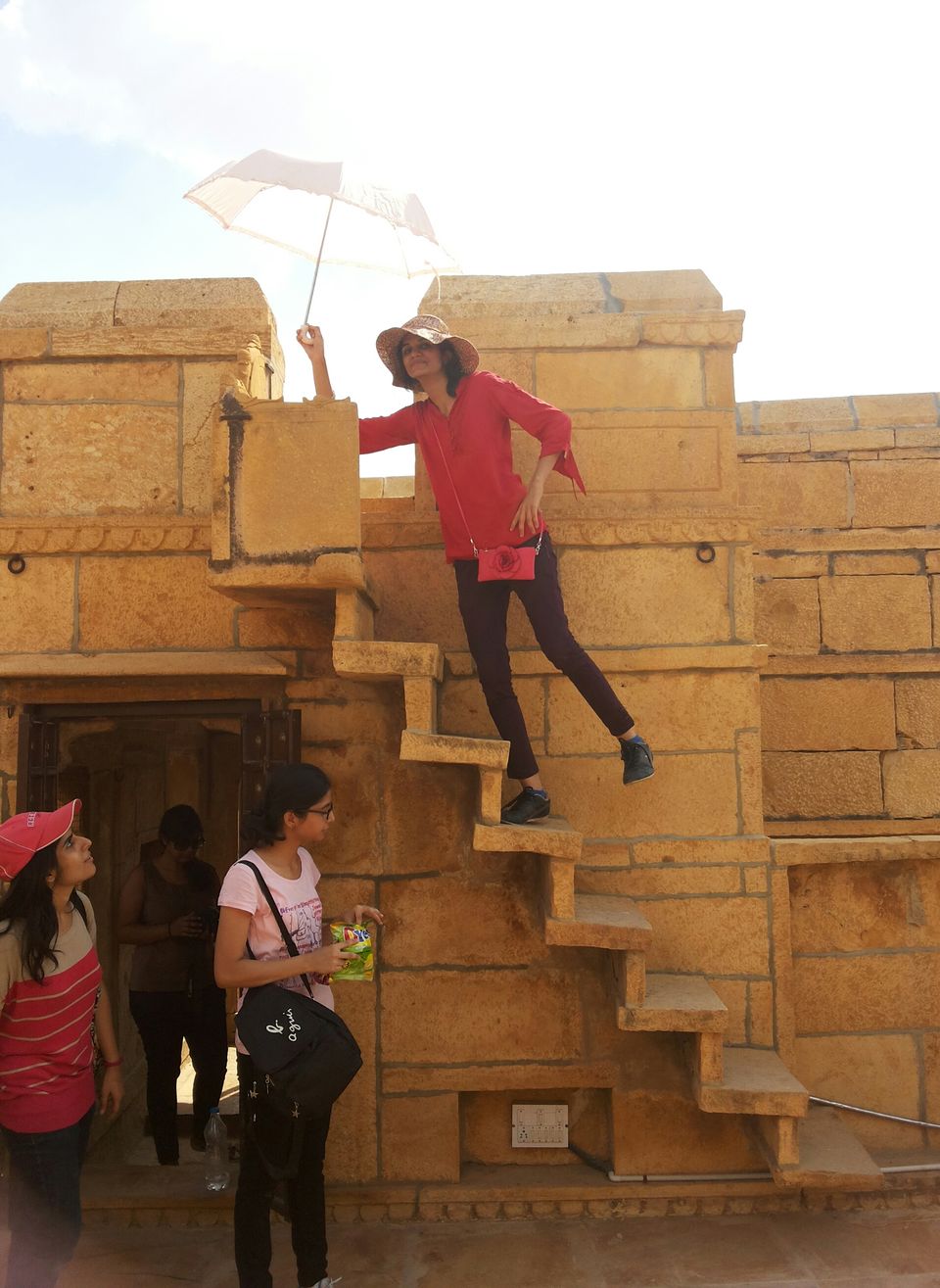 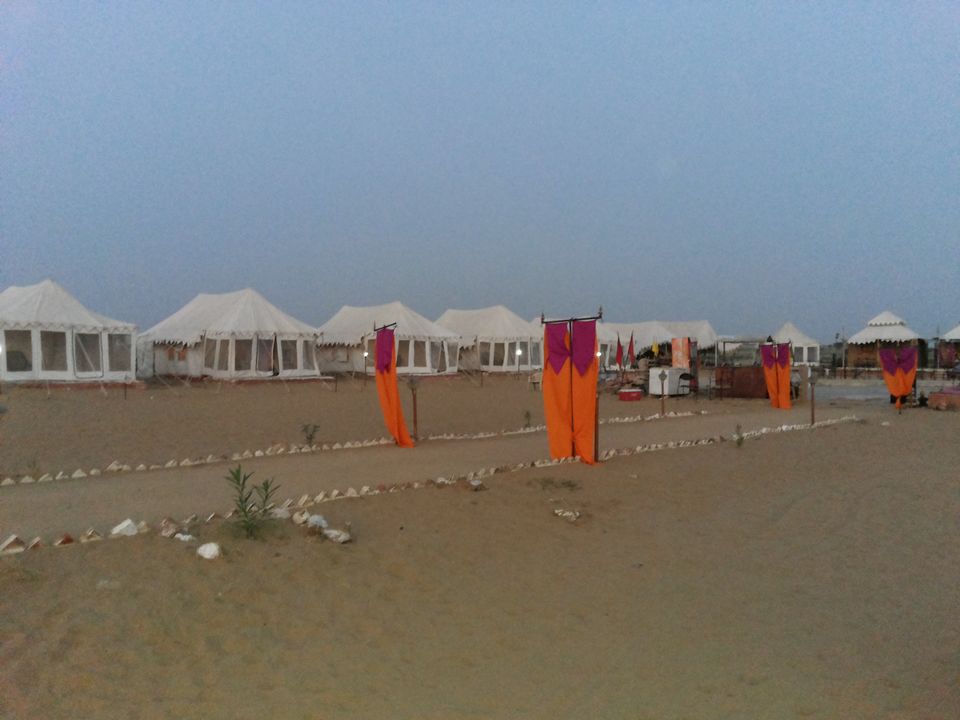 The inside of a tenthouse. 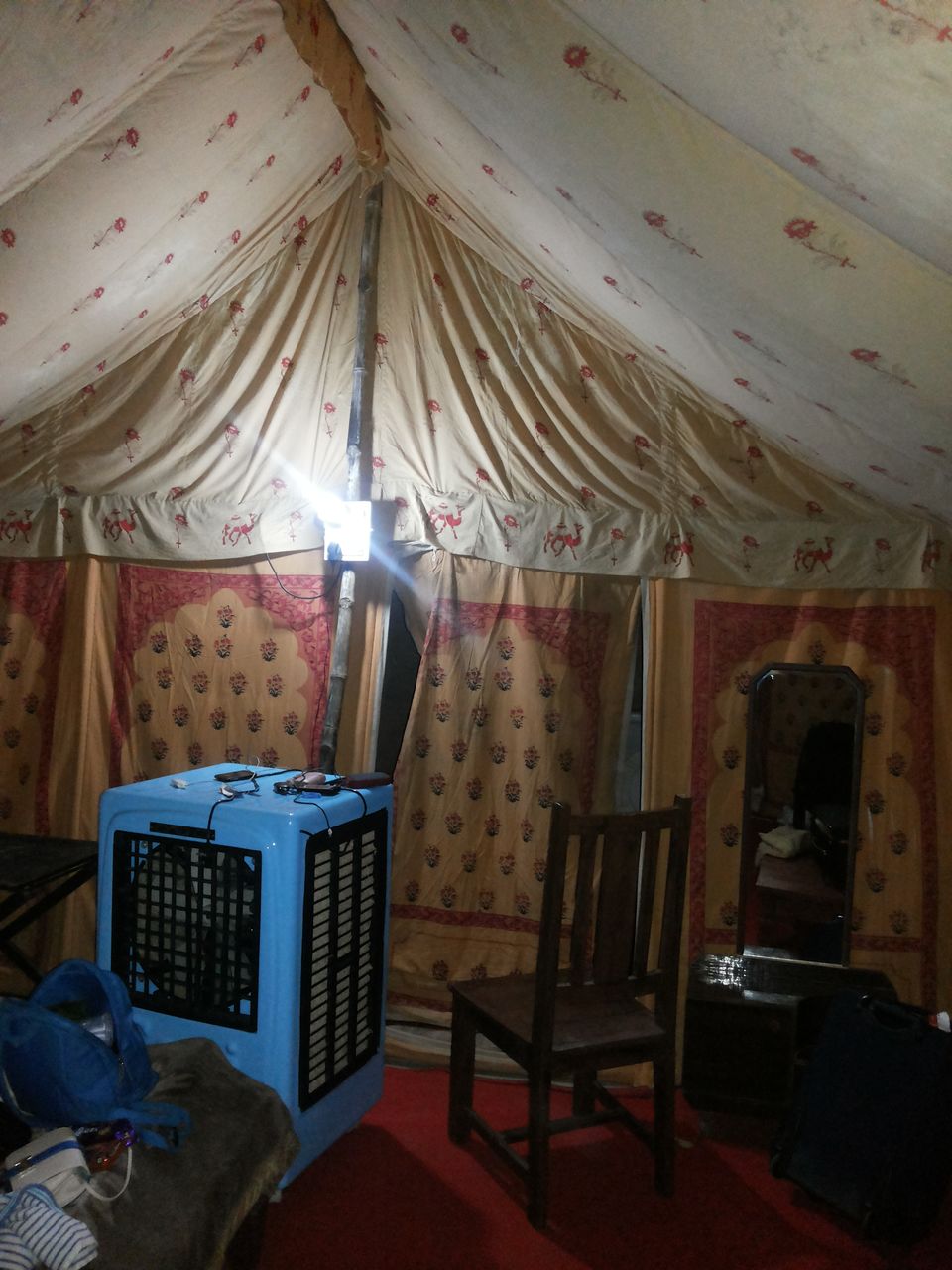 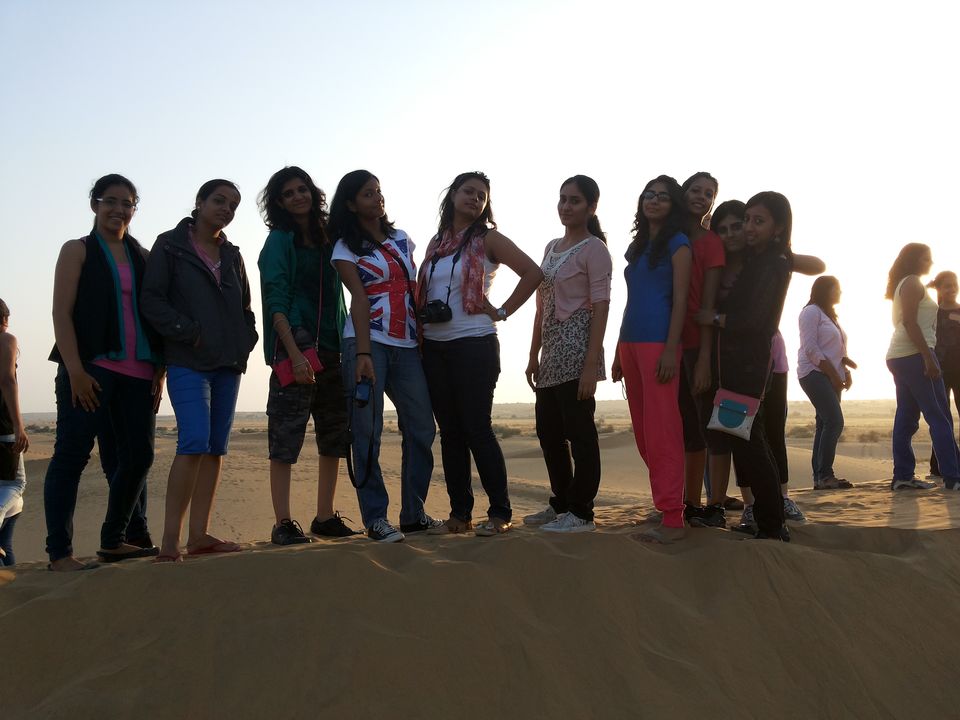 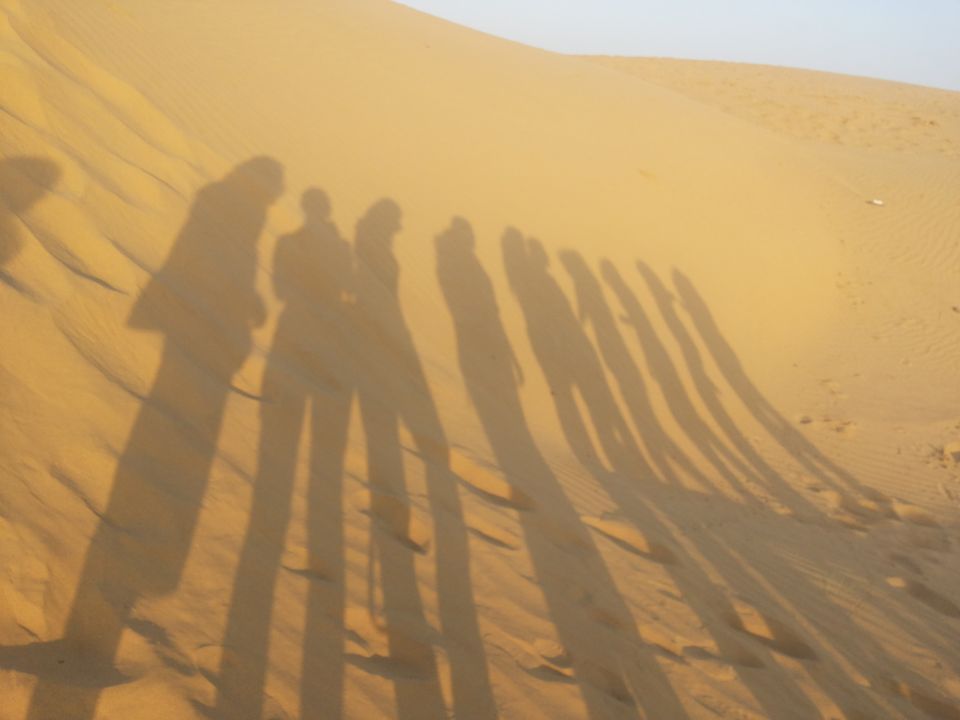 The vast desert and you. 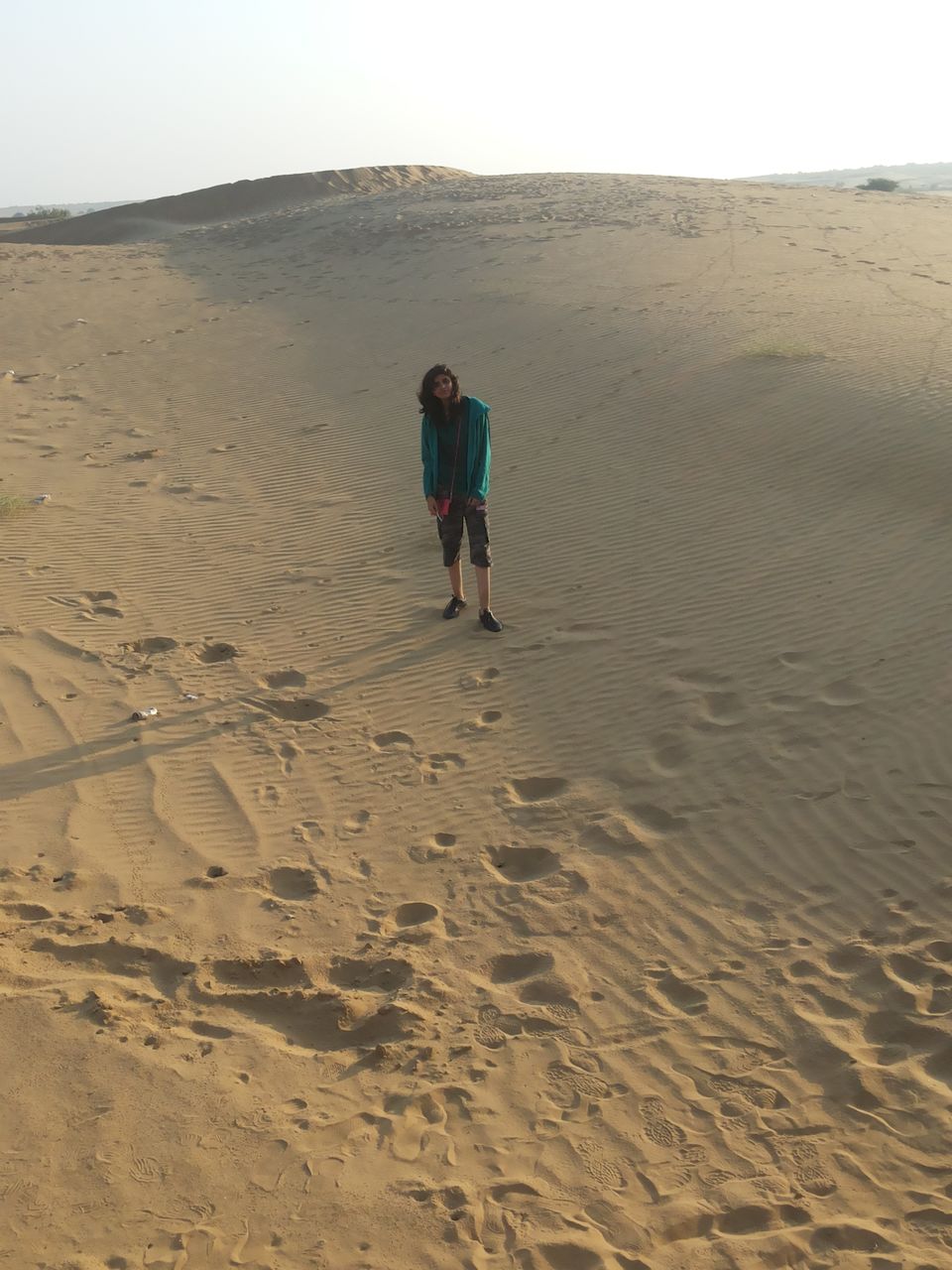 Trips with college friends are one of a kind and if the city you have planned on is the culturally rich and beautiful city of Jaiselmer, the feeling of euphoria is guaranteed. Read on. Happy Virtual Tour!

A group of 22 young femgineers (The jargon is used for Female engineers) set the sail to experience thrill in the ocean of sand, away from the city chaos.  Let me warn you, the start to the sail was not on the lines as planned. The bus was late. Yes, you heard it right…we had planned on to go all the way in a Bus. Only when we finally reached our resort (It had all the luxuries with notices all around saying- Dont waste water, it is not a luxury in Jaiselmer), We realized that the distance between Delhi and Jaisalmer is not to be covered in a BUS. Kindly take note. The highway  does not have ANY dhabas, which are so common on the highways of North India. We literally starved. 16 hours of travel, sitting erect in a bus…and your backbone craving for a bed. But we are tough you see. We beared the journey, gazing across the vast barren stretches of land—not a sign of life—not a sign! The destination was heaven. It had to be, no?  Our velocity was back to the escape velocity. Excitement level- immeasurable.

The Jaisalmer Fort and Haveli feels

Entering the colossal gateway, You will feel like entering into a golden boundaryless castle. The fort is so huge and beautifully crafted! The process of building it did not make use of a single drop of water- This came to us like a jaw dropping fact. But keeping in mind the scarcity of water the town had, using water in the construction was not feasible. We revered the logic behind the design. The fort was an altogether different city in itself. The local men dressed in white kurta and dhoti, turban- tied in an enigmatic way, flaunting not so typical moustaches could be seen riding their bicycles. The ladies in their exotic ghagra-choli looked so graceful! The temperature was high but who cares. Roaming around gave us the feeling of belonging to some royal family. The Hawelis had windows and doors so intricately designed. Our Camera and cellphones were running out of battery. There is a viewpoint which gives you a panoramic view of the city of Jaiselmer. Near that area, you will find a person who plays Sarangi and sings along. The moment he sang- kesariya…padharo maarey desh…I got goosebumps. We even chit chatted with him and were surprised how he knew we were from Delhi. The time was getting better and better as it was passing.

The very evening we were off to our camp area in the middle of the desert. Walking on the sand is a different feeling. It is a lovely feeling actually. You leave a trail of yours behind as you march forward. The fact to think about it is that, the trail is temporary. This got a bit of philosophical, let me take you back to our camps. The tenthouses had the luxury of a water cooler but came with no guarantee of an insect free environment. One of my dear friend is really very conscious about an insect-free zone. So, it will not come to you as a surprise that she did not sleep. Well, most of us did not…I’ll elaborate upon this a bit later. Just be with me. We then saw the cultural program in the middle of the desert. Sitting on mats, in a circle like the sethanis, experiencing the Rajasthani dance and music in full swing is one thing and being given the opportunity to dance with them and feel being a part of them is another. We enjoyed both experiences till our feet lost strength! We then had Rajasthani food which surprisingly was not that spicy. We had to go for Camel ride the next morning and we must all sleep so that we wake up on time. BUT, We won’t. Because, the stars did not allow us to sleep.Yes, the stars. The night sky was a splendid scene to watch out for. The sky so clear, the stars so near, We were in total awe.  We could identify many constellations and rest our creativity allowed us to imagine stars forming patterns. That night was so great! We all played antakshari and chatted and chatted till the black sky turned into blue marking the other day. We were not tired. It was time to witness the sunrise, time to play with the sand. It was a caravan, like the one we see in movies. Our Camels lined up one after the other, travelling the stretches of the desert. We saw the sun rise gradually from an end of the desert. It felt so peaceful and serene. We rolled in the sand, got clicked, and enjoyed every bit of it. We tried to capture in our eyes the landscape and every moment.

It was time again for the return bus journey. And the journey was a bit scary one. The driver did not keep track of the petrol and we soon ran out of it. This is a rare reason one can imagine for a bus breakdown. But the fact is that our bus was stuck in the middle of nowhere. I have described you the highway in the beginning itself. The sweat running down our heads, our heart throbbing at a not so normal pace, It was a bike commuter who cared to get some petrol to us from the nearest petrol pump. We had to wait for two hours. Okay, so now we expected everything to go smooth. Somebody rightly said, Never Ever Expect. Next what happened is, the bus hit a pole and the bus window of the back seat was shattered into pieces. No one got hurt, but it was scary. We just crossed our fingers and kept our mouth shut till we were in Delhi. Huh! We reached Delhi. What a thrilling bus drive! (I will NEVER recommend anyone to go to Jaiselmer from Delhi on a bus, wait, have I mentioned it before?  You now better know why.)

Thanks for reading. For the readers who know how to read Hindi. Have a look at this poem that I wrote: