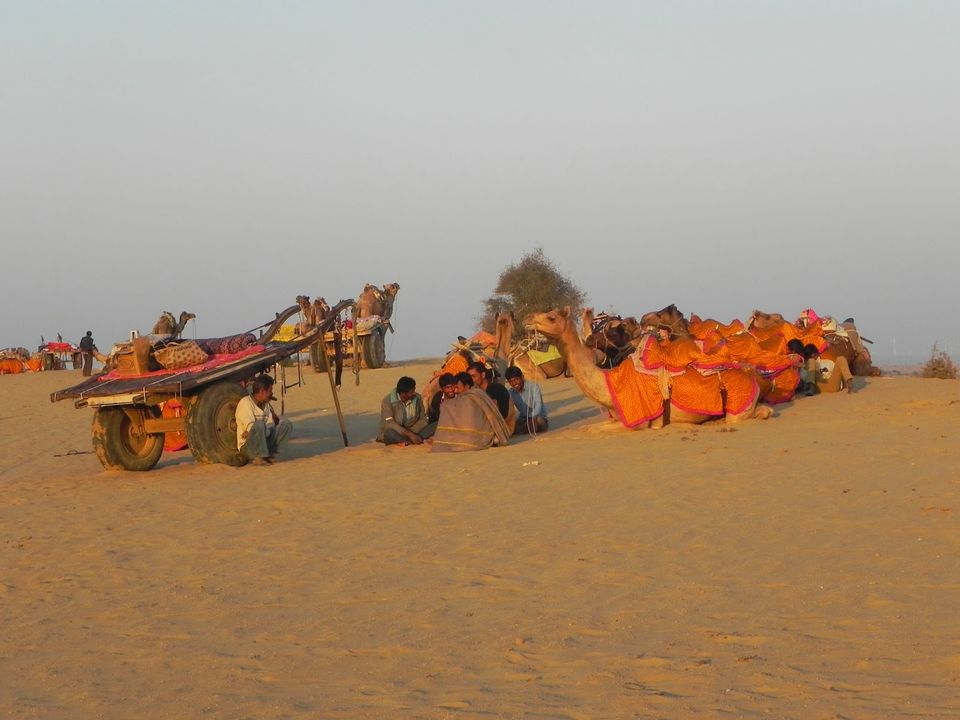 The camel's name is Michael Jackson.The sole source of sustenance for Ambaram-- the 22year old thin, undernourished boy from Khuri--a desert village in Rajasthan.This village shot into limelight a few years ago as a tourist destination because of its proximity to the desert in Jaisalmer. 'Rezots' have mushroomed in the area offering tourists a full package of the desert.That includes a camel ride to the desert 2-3 kms away to view the sunset, traditional Rajasthani folk song and dance performance, authentic Rajasthani food and an option of a night's stay in the resorts.Hordes of tourists throng the specified area of the desert late in the afternoon and the mood seems to be one of carnival.Ambaram also makes a few bucks in the tourist season.But this period is woefully short to sustain a family for a whole year.Yes,Ambaram had married at 19 and has a seven-month old daughter.There is no cultivation ,no crop as there is no water in that terribly arid region.The desolate landscape is drab and dreary.....white sands on every side with occasional thorny bushes.The situation is so bad that even the camels almost starve as there are no fresh green thorny bushes.There had been no rain for the last three years in a row!! When I was trying to gauge the kind of hardship they have to endure, came the pitiful plea for a job in 'Kolkatta'....any job...anywhere....I shuddered to imagine how this and the other families like his could survive in that inhospitable condition with no guarantee for any earning whatsoever.Then he has to feed his camel also and take him to a veterinarian whenever required.The imploring look in his eyes seemed to hammer in me the real Rajasthan beneath all the glitz,glitter and pomp.It was not the exoticized land of rajas and maharajas,forts and palaces,elephants and Mercs only as it is projected and served on a platter to tourists all over the world.This was the Rajasthan where the likes of Ambaram turn old before age... as starvation and malnutrition take their toll on youth.This was the Rajasthan where the poor, resourceless people literally fight against the scorching heat of the blistering desert sand and the fierce, biting cold.This was the Rajasthan where women,faces veiled,walk miles in the desert in the excruciating heat of summer to fetch a pitcher of water.This was the Rajasthan where female foeticide is rampant and regressive customs,traditions and superstitions are ingrained in the collective psyche.
When getting down from the camel-cart I handed him a few bucks more than what I was asked to pay.I noticed his almost bare feet and the thin,tattered apology for a jacket which he was wearing in a vain attempt to ward off the numbing evening cold of the desert.For a few moments I felt guilty of my protective warm clothes .I realized that not everyone in Rajasthan was a Raja. .