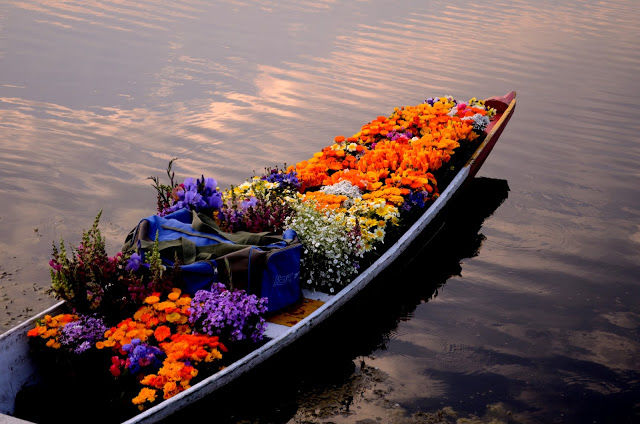 I was traveling to this heavenly abode (Jammu& Kashmir) for the first time and the impression it had on me was only poppies. Yes, poppies which I had seen in most Bollywood movies. When traveling with friend, train is the best option as it makes lifetime memories. But till then I didn’t know that during this trip I will be encountering with something which is not in my checklist or even in the distant dream.

After 12 hours of journey, we all were badly tried. But the valley beauty will compensate them. The train was till Jammu and from there we drove to Srinagar by car.

Mystics and sages have always found refuge from the mundane in the Himalayas, the modern traveler meets on those high valleys fascinating humanity and gains a different perspective.

Srinagar, as an elegant aging lady, recovering from a long illness, claims back her best morning and evening light. Watching the sunrise over the old city remains an experience of incomparable beauty. The glow of the Himalayan heights softens the outlines and bathes the brick and wood houses in a golden hue.

While imagining the city as it was in the 15th century during the times of Badshah, the great king, it is wise to stop by the stall of the saffron merchants in Zaina Kadal. And over here I had my accidental encounter with Saffron (Kesar). When one of the merchants asked “Have you seen the cultivation of Kesar flowers? I nodded my head in no and he replied you should see it.

Wasting no time I asked him where I can see it. He said in Pampore. A historical town situated on the eastern side of river Jehlum on Srinagar-Jammu National Highway. Known as "Saffron Town of Kashmir", the area is about 11 km from Srinagar city center Lal Chowk.

And then without wasting any time, we drove straight to Pampore. Ask me what Kashmir smells like and I will not hesitate. It smells like saffron. Not that it is the only fragrance to float in the air, far from it. The moment you arrive in the valley, your nose is tickled by a wide variety of impressions.

The scent of saffron is the most impressive and persistent in the visitor’s nose and mind. It entails the refinement of the culinary culture in Kashmir, the extent of this mountain people’s hospitality, the wealth of the exchange between man and nature. If you enter a Kashmiri home as a welcome guest, without fail, you will be offered a traditional green tea, called kawa, aromatized with saffron.

It will be served to you in a small cup, the pialla, from a hand-chiseled copper samowar, a reminder of Kashmir’s strong ties with Central Asia. Only for special occasions will Kashmiri women spice their curries with saffron, as even here it is more expensive than gold.

Saffron is a royal spice not just because of its high price but also because local folklore associates it’s blooming with romance.

The last king of Kashmir, Yusuf Shah, is believed to have visited the saffron fields on a moonlit night to see the magic of the purple flowers in the 16th century when he was mesmerized by a lone female voice singing in the wilderness of the vast saffron fields.

The king`s heart was smitten by the voice and he sent his courtiers to find out who the singer was. It turned out to be a village woman named Zoon. Yusuf Shah then married Zoon after she divorced her previous husband.

She was christened Habba Khatoun - the queen. Like Noor Jahan was to Mughal emperor Jahangir, Habba Khatoun is believed to have been the most powerful influence in her husband`s life. This is what history says.

Watching the saffron bloom during moonlit nights in early November is something nature lovers never miss. Despite the problems faced by the saffron growers, the magic and mystery of the royal spice is something that has become synonymous with the beauty and grandeur of Kashmir.

The fragrance and colour of the vast saffron fields have over the years fired the imagination of kings, poets and lovers alike. It is a heritage crop Kashmiris have always prided themselves about.

The light of the moon brightens the barren earth, only the most insistent gaze reveals the presence of so many small iridescent flowers protecting like a womb the precious pistils. You will stand there in awe and you will wonder: “who created such an unspeakable beauty?”

Imagine a vast plain of grey-brown earth, shaded here and there with willow and almond trees, surrounded by snow-capped mountains gently warmed by the late autumn sun. Then cover that plain with swaying purple flowers, each exuding the lush and beguiling scent. People wearing homespun clothes pluck flowers in the fields and heaping them into wicker baskets. Their chatter and laughter ring through the clear air, old men smoke hubble-bubbles under the trees, and all you can do is marvel at a sight like no other anywhere in the world.

Till today I have not found a sight more breathtaking than Pampore’s saffron fields. The flowers had grown like a carpet, close to the small ridged fields and bare-branched almond trees had interspersed between them. Low back mountains had bordered the horizon and in the distance, golden chinar trees had created rich rows. The almond and walnut trees had been leafless with only their delicate branches spreading in bare silhouette and the only touch of green had come from the willows, which had drooped close to the fields.

To me, it had seemed like a sea of violet and the flowers had undulated all the way from the road to the silent stony mountains in the background with occasional bright spots of colour being provided by the saffron collectors’ clothes.

I was also part of the Tulip festival which is organised every year. Enjoy the lovely Tulip in almost every colour I can think and yes Amitabh Bachchan-Rekha famous song

If you're looking for someone to work an interesting assignment(s)-writing, photo stories, to-do guides, interviews, destination reviews, please send me an email- at akritimj@gmail.com and we can take it from there!! View all posts by at https://www.travelkatha.in/