Every time I stand before a beautiful beach, its waves seem to whisper to me: If you choose the simple things and find joy in nature's simple treasures, life and living need not be so hard ~Psyche Roxas-Mendoza&nbsp; 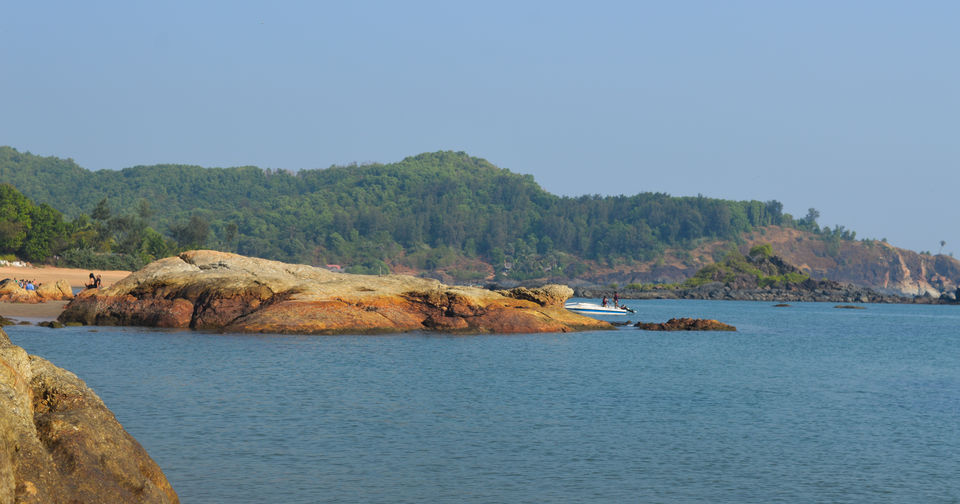 "What happens when 4 folks are frustrated with their jobs, pissed with their friends , fed up with their lives and New Year is round the corner?"

2016, had not been a great year for Me, Prem, Meghana and Arka. Though we graduated business school with flying colors, the lack of substantial work, at our respective jobs made us feel like we were in a rut which had us complaining about our lives to no extent. Amidst this who could topple the other with their "most painful woe of the day", at lunch on this fateful day , which happened to be a Wednesday, one of the longest days of the week, if you know what I mean, Arka suggested something.

Now I am not someone who is per say, ever backing out from an outing, but this was 3 days to new year’s! I am not Richard Branson to just "Jet Set Go". Therefore, we talked about the possibility of bunking office, as none of us had leave for the year. Within 30 minutes, just the thought of getting away from our mundane lives had sparked a new lease of energy into us.

"So where do we go and how do we get reservations at the last moment ?", Meghana asks. Arka, being in-charge of the planning for the group "Gokarna mein there is this place which is like a hostel, let's try there". Prem adds "kuch nahi hua, toh car hai na". That's when I realised, hold on, we have a possible roadtrip on our hands . We quickly chalked out a route with places to cover and gave ourselves 24 hours for anyone to back out.

"Tum log chalo ya nahi, Prem and I are doing this"

So finally the D-Day arrived. We started off from the heart of Bangalore, Sahakarnagar at 00:00, on 30th of December 2016. We headed north ,taking the NH-48 . Blessed with fantastic roads, and not much of traffic being a Thursday night/Friday early morning hours.

First stop over of the trip, Jog Falls. They are the second highest plunge waterfall in India located near Sagara taluk, Shimoga district in the state of Karnataka. It is a segmented waterfall which, depending on rain and season, becomes a plunge waterfall. The falls are a major tourist attraction and is ranked 131th in the world by the waterfall database, according to Wikipedia.

Now, what we expected and what we got, couldn't be more far apart! We had all heard about the beauty that was the falls, but what we saw was merely a giant animal taking a leak. To say our trip started with a disappointment, would be an understatement of sorts. However, for the photographer inside me, this meant I could just be trigger happy and look for oddities, which is kind of my specialty. We spent about an hour or so at the falls, which even during the end of the year was a major attraction for family and school trips. There are few tea stalls, where we had our early morning tea and few snacks.

After the morning "pet-pooja", we started our drive again. Now the roads started getting bad, and we realised that the target of reaching Gokarna by 10Am, wasnt gonna happen. But again, as they say, a trip is more than just good roads. It's about the company. I couldnt ask for better company than these three. So around 12 ish in the afternoon, we reached the outskirts of Karwar which is about 50 kms from Gokarna. Now since we didnt have a confirmed booking at Gokarna, we decided to have our lunch and then head to our abode for the evening.

The place we had decided early for our lunch stop was Namaste Cafe. We had heard so much, that when we actually ended up there, we didnt mind the 30 minutes wait time. Thankfully the fact that, its on the beach and we had our hands on a bucket of beers ,made the wait time go by without us getting irritated at all. The food was pretty good, however not extra-ordinary. The ambiance however made up for the same. We spent another hour or so roaming around the beach, and clicking some nice photographs.

Slowly, we headed to our abode for the day, Zostel at the Kudle beach. Now Zostel is India's first and largest chain of backpackers' hostels. They have 20 or so properties across India, which cater to a "backpackers" need of a bed to rest and a loo to shower. Now since we had just 2 beds booked, we weren’t sure about the other two. Thankfully, they had a 2 bed villa open out, and we took that up. Thank god, else me and Prem were destined to be on the beach for the night, which on after thoughts wouldn't have been bad.

We quickly freshened up and planned to hit the beach for sunset and evening. Now this property is located just 500 metres away from the Kudle beach. It is located at a hilly terrain, so you are basically overlooking a beach all the times. In fact there is like a small pathway, which directly leads to the beach as well. However ,since we had come driving and were tired to walk, we decided to take the car and follow the Google maps for direction. Now the maps did show that the beach was only 500 metres away and it was a straight road from the Zostel property.

But what the map did not show was the fact that, it was a road which would barely accommodate a three wheeler, one at a time. Something that we did not know until it was too late. We drove a few hundred meters, and noticed that the width of the road was reducing, and within seconds panic struck, when we realised that, our car was going to be stuck, in a road meant for three wheeler autos, with stonewalls on both sides!

Whatever little high we were from the beers, it just evaporated within a second! What followed was mayhem of sorts for the next 20 minutes or so. Now I pride myself on being a precision driver. However this scared the crap out of me too. We were in our Ford Figo and we didnt have more than 2 inches on both the sides to give.

After some major, screaming and shouting, we reversed some distance to get to a place where I though t we had enough to try and turn. What followed for next 20 minutes was a display in precision backing and moving, which Ross from F.R.I.E.N.D.S would have been proud of, when he got his red convertible wedged in the streets of New York.

We managed to get the car out of there, unscathed, back to Zostel. This is when we realised everyone else, who had drove to the property were smart enough to just walk. Another lesson on "when in doubt, ASK". So after we were all out of the shock, we just decided to take the pathway down the hill to the beach.

Now there is something with the beaches. It has this hidden power of just eliminating any kinds of worries and sorrows. And I am told, this was the birthing place of lots of lovely stories and tales. We spent the next few hours sitting on the beach, exploring the small shops selling antiques and spices, majorly catering to foreigners.

Another thing that caught my attention was the cleanliness of the beach. Hands down, one of the better kept beaches of our country. Infact, what was humbling was the fact that, most of the cleaning was done by the local residents. One of the incidents that comes to my mind is, of me and Prem sitting and munching on some chips while it was pretty dark. Thanks to a huge light installed at the entrance of the beach it was pretty well lit, like a 200 metres area from the main entrance of the beach. There was this little girl, maybe 5-6 years old. She was picking up these packets lying on the beach and putting them on her side bag. Now this was unusual because ,one she didnt look like a rag picker, she was way too well dressed for that and secondly she had a smile on her face. We kept looking at her as she approached us.

"Bhaiya, please don't throw the chips packet on the beach. I will come and collect it once you are done. I will be around"

I was blown away. I had a new found respect for the folks and specially her parents for instilling the belief of taking care of the environment around her as her own home. Later we came to know that, her parents were also involved in the cleaning drive, which happens to be a weekly thing , every Saturdays, on the Kudle beach.

After relaxing quite well, we headed back to Zostel to have our dinner . The food at Zostel is pretty awesome and you would be pleasantly surprised at the menu they have to offer and the quality of food they have to offer. We had a sumptuous supper and decided to call it a day.

Day 2 began with us waking up early. We had our breakfast, and decided to move on to the next step of our journey. We soaked in the mid morning breeze and as the sun was climbing up on the horizon, we bid adieu to Gokarna.

Next stop was Palolem,in south Goa. Now we had absolutely no plans for this place. We had unanimously decided that, we are going to bring in the new year on the beach and just spend the night there. And we wanted to stick to the same! We reached Palolem in the afternoon. The roads in Goa, not definitely the greatest, however the greenery around and just the feeling of being in Goa, kind of takes you over and puts your merry glands in overdrive. So we headed straight to a shack on the beach.

Havana Cuba is where we decided to stop for our much needed food stop. A lovely place, right on the beach, good coastal food menu to choose from and lovely selection of refreshing drinks to cool the heat. We spent an hour or so, and headed to the beach to view the sunset. "The sunset, relaxed demeanor of the people, artisans performing various art forms and an occasional sip of a chilled beer. One can so easily forget the fact that, you had a bad year professionally and personally and you are headed to the same old routine life in a day's time."

Now Palolem has so many cafes, that even without a reservation on a new year's eve, we didn't struggle much to get a place. We still managed to get a table at Havana Cuba.

We set out to spend the night, and say grace to the year we all had. Be thankful to God, graceful to things we got beaten bad by. It's in these moments we realise that life isnt about having it all planned, having everything figured out, at all times, sometimes we just need a timeout to look at the blessings we have been showered by, shrug your shoulders to the adversities, and move on to the next day with a smile on your face!

We brought in the new year, with immense amount of fireworks and Chinese lanterns. We bid adieu to 2016 and welcomed 2017 in the most amazing fashion, we 4 could hope for. We called it a night at, little past 2 AM. Headed back to car to grab some sleep, before we drove back to face the same old challenges of life, but with a bit of extra vigour and a smile to go with.