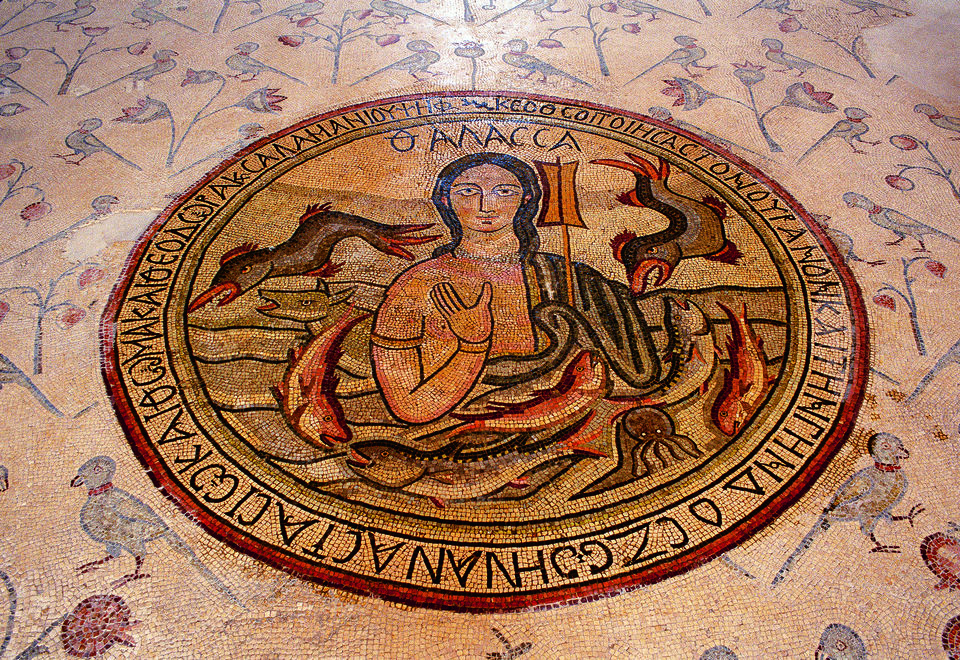 Madaba, “the City of Mosaics”, located in Central Jordan is best known for its spectacular Byzantine and Umayyad mosaics, and is home to the famous 6th century mosaic map of Jerusalem and the Holy Land. With two million pieces of coloured stone, the map depicts hills and valleys, villages and towns as far as the Nile Delta.

The Madaba Mosaic Map covers the floor of the Greek Orthodox Church of St. George. The church was built in 1896 AD, over the remains of a much earlier 6th century Byzantine church. The mosaic panel enclosing the Map was originally around 15.6 X 6m, 94 sq.m., only about a quarter of which is preserved.

In line with Jordan's commitment to restoring and preserving its mosaic masterpieces, Madaba’s extensive Archaeological Park and Museum complex encompasses the remains of several Byzantine churches, including the outstanding mosaics of the Church of the Virgin and the Hyppolytus Hall, part of a 6th century mansion.

Other mosaic masterpieces found in the Church of the Virgin and the Apostles and the Archaeological Museum, depict a rampant profusion of flowers and plants, birds and fish, animals and exotic beasts, as well as scenes from mythology and everyday pursuits of hunting, fishing and farming. Literally, hundreds of other mosaics from the 5th through the 7th centuries are scattered throughout Madaba's churches and homes.

Close to the Church of the Virgin is the Madaba Institute for Mosaic Art and Restoration, which operates under the patronage of the Ministry of Tourism. The only project of its kind in the Middle East, the Institute trains artisans in the art of making, repairing and restoring mosaics.

To the east of Madaba is Umm Ar-Rasas, a very ancient site that is mentioned in both the Old and New Testaments of the Bible. The rectangular walled city is mostly in ruins but does still include several buildings, as well as four churches and some beautiful stone arches. The main attraction is outside the city walls within the Church of St. Stephen, which contains a very large, perfectly preserved mosaic floor laid down in 718 AD. It portrays fifteen major cities of the Holy Land from both east and west of the River Jordan. This magnificent mosaic is second only to Madaba’s world famous mosaic map of Jerusalem and the Holy Land.