The Road to Freedom - Kodachadri

The journey started with lots of lies to friends and family. We started around 5 am on 5th Dec from my town Thamarassery. We kickstart the bikes and we headed to the famous thamarassery ghats. Our first stop was on the 4th hairpin bend in thamarassery ghats road. We went to the masjid for prayer and returned fast. Then we reached the top and enjoyed the scenic beauty for a while and moved again. As the traffic was low we conqured the roads so fast with giddiness of a schoolboy!. We reached the kl-Ka border around 8 and took a few snaps and entered Muthanga forest range. We met some fellow ridsrs from there and moved on. our next stop was at gundelpet for the breakfast. We rolled again at 9 after breakfast. The warm roads and vast fields surrounding welcomed us from the cold morning.we reached Mysore around 10 and wandered around Mysore palace for a bit. Then we entered the Mysore - Bangalore highway. We saw some cops on the way but luckily they didn't stopped us. We reached srirangapatana within 30 minutes and took the road to Shimoga. I Hadint seen a road like that in my life time. I checked the odo once and came to know that the road was straight for the last 25 kms.with just some ups and downs. We reached shimoga by 6 and headed straight to masjid for prayers. After that we started to look for a cheap hotel and found one. The day ended with nothing much special incidents.

This was the most adventurous day in my life!!. My whole plans shatterd. We wnet straight to jog falls from shimoga by missing the lion safari at shimoga. And unluckliy jog falls was dried due to no rains and a little water was left. We felt bad because jog was the primary destination in the trip. Then we rolled again to kudachadri. Seriously,I had no idea about the place. Our disappointment was gone after seeing the beauty of nature to the road from jog to kudachadri. The hills with yellow grasses along the roads made our mind to do some adventures and take some pics to tease our friends.we entered the area with our bikes and took some photographs. We moved again to the whole new chapter in our lives. I really felt shocked by seeing a cobra in the middle of the road but luckily it didn't do any harm. The we reached at the base of mookambika and headed to nittur. Our fuel was getting low as we hadn't seen any petrol bunks for long time. And the irony was that we didn't see any humans as well. Most of the time I was thinking that this place has got more cattles than humans. After an enroute of about 15 kms we found a petrol pump. After filling fuel upto the brim we state to the unseen lands.we reached nittir by 1 pm and headed to road which was not at all taken by any human beings. Thanks to Google map because I never felt that much exciting in my whole life. The road was like a rally track with full of mud and stones through the middle of a hardcore jungle.

We reached the base of kodachadri by 2 pm. I was confused about the entry of bikes to the road uphill. But nothing stopped us. We went with full fledge enthusiasm in our mind. The road was a new chapter in our whole ride coz I hadn't feeled anything like that in my whole life. It was quirky off road track with sand stones and roaks whole over.unluckliy midway my bikes fuse gone out and we were dumbstruck. I actually figured out the problem fast and started the bike again and the engine heat got high so fast taht it was unable to handle the bike uphill again. So I parked my bike midway and got on my friends bike and reached uphill after lots of dilemma.we were exhausted by that time and we decided not to take the route uphill by walking. So w e returned to the base. It took us 4 hours to cover 14 km. As it was 6 pm our next agenda was to find a place for stay. Google maps showed a place called theerthahally. But the root was not figured coz of the underdeveloped Karnataka. Since leaving jog falls mobile signals was mere unknown. Kumar (a local man) helped us with the route. But I was having the feeling that he was going to kidnap us and he was a robber. But the route was good. We had no idea about the surroundings of the road we travelled. And at last we reached a T junction. I was in the front travelling at 80kmph and the other 2 following me. And the T junction was a night mare. Just a second gave me the idea about the road and my brakes was full on. The tires created a straight line. I bumbed into the filed up ahead and luckily I was okay. After a bit a lorry passed through that state highway and I thanked God for my life. After a chit chat with locals and their questions about our trip we headed to theerthahally. A bit of a city was that place.we found a hotel and sleepiness was all over us by that time.

The fever caught me the next day. But my mind was not ready to accept it. So we headed to kundadri with our adventures. It was a exciting place same as that of kudachadri but the road was too good for us. The scenic beauty was too good and we left there with some photographs. We headed straight to Kudremukh. I was a bit exhausted by the time but paracetamol and glucose powder refueled me.i found a bunch of electric posts in the road side as the best bed in the world.We reached kudremukh by noon. We were sad to here about the high profile iron mining of that beautiful place. We didn't mind to explore the place and we headed straight to charmadi. A picture from Facebook got us there. But the picture was a hard reality as it was just some photographers artistic mind. But we enjoyed the place as it was out only for back home. We reached Kerala boarder by 5:30 after passing a series of towns in eastern Karnataka. We planned to take the easiest route home but we dropped it because we had no idea about the route. We headed straight to kanjagad and reached nh 17 which was out easiest way back home. I was completely exhausted before Kannur. A black tea, paracetamol, glucose brought me back. We bumped into some freaks riders at see petrol bunk from kannur. They were heading from Goa. We cruised the highway at maximum speed as the only thought in my mind was that "home was the best place in world". 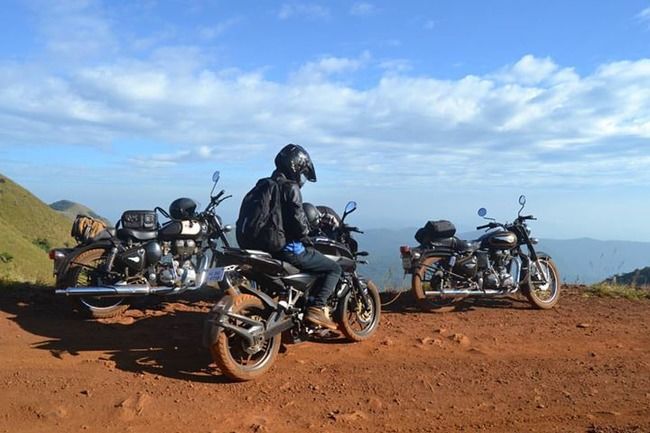