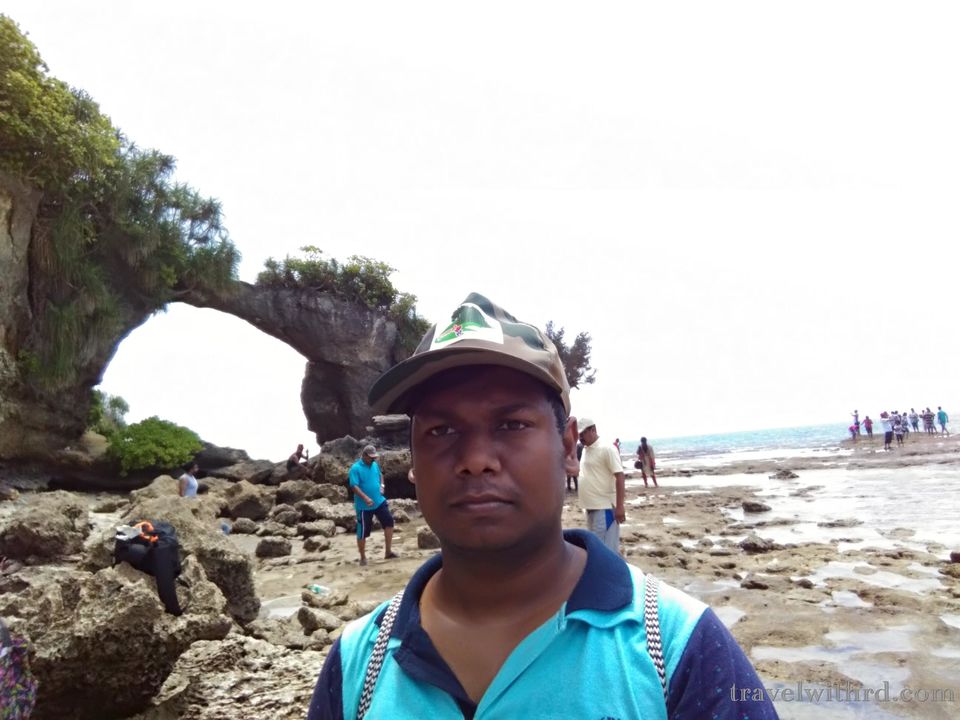 Phoenix-Bay Jetty - yes this is the name of this Jetty in Google Maps. The boat that goes to Neil and Havelock runs from here. We had bookings to go to today's Neil Island. The ship had to walk at 7 in the morning, we reached only six and a half o'clock. After safety-checking and check-in, going to seats in air-conditioned aircrafts.

It was a two-hour journey. The sea was disturbed - perhaps it would be quiet sometimes. Large waves were coming. Heavy ships also shake well. G.P.S. Driven the speed of the ship by running. It was running at a speed of twenty kilometers per hour. Well the marine distances are measured in 'nautical miles', but I understand kilometer.

The island of Nile began to appear from a distance. Hiking around half of it, the ship went on jetty. It was written out in front of you - welcome to the island of Neil.

After our landing, the ships of Havelock began to sit in this ship. Now this ship will go to Havelock. Tomorrow we have to go to Havelock from this. In this way, we had twenty four hours of time to roam the Neil.

Potato curry, puri and coconut chutney - came to enjoy. From above Bengali rosgulla This shop was near Jetti.

The name of the hotel where we had a booking was black. Two kilometers away from Jetty. The Sheryad auto runs, but due to lack of information we have set foot in this distance. This hotel is located in Ramnagar and the shores of the sea. Bamboo cottages were made One of the fare was 800 rupees. This is the loss of going in January.

Bicycle rental plan was planned, but the rent was Rs 400 per cycle per day. Two cycles have to be taken, the intention is to be avoided. How big is Neil Island alone? Walk around

After paying ten-ten rupees in the Sheyer Auto, came back to the main market - with Jetty itself. Here is the 'Natural Bridge' about two kilometers away. Pucca road was built, but we were on foot. Tired

Here is the Coral Coast. Some walk along the shore along the shore and we reach the bottom of the 'Natural Bridge'. Good place. Natural surprise Every Indian must see such places located in your country. Do not describe much, photos are taken down, they also have to enjoy.

More than half a kilometer forward, a bridge was visible. There was a desire to go there too, but due to coral shores and big waves, this desire was abandoned. Remember - if you get into the water on the coral coast, then be careful, you have to be hurt. The one who survives is fortunate. We could enter the bridge and reach the bridge, but did not want to be injured. Standing here, pulling two photos from an elderly foreigner by calling 'One photo please'.