Konark, a small town located in the Puri area of Odisha on the east coast of India, is the home to the 800 years old Sun Temple, a World Heritage Site which is now almost in ruins. Built in the thirteenth Century by King Narasimhadeva I of the Eastern Ganga Dynasty, this Sun Temple Konark which is also known as “Black Pagoda” due to its dull black color, is outlined as a tremendous chariot underpinned by twenty-four chariot wheels, devoted to the Sun God.

This Sun Temple Konark, a symbol of India’s ancient architectural skills was completed in 12 years (1243-1255 AD) with the help of 1200 workers. Beautifully designed as a chariot mounted on 24 wheels, each of diameters about 10 feet decorated by most exquisite stone carvings, and drawn by 7 strong horses, it boasts of India’s rich cultural heritage. The Sun temple follows Odissi style of architecture (except the erotic stone carvings on the walls), however a significant part of the main structure has fallen and it survives just in parts. However, it’s sad to see the present state of this temple which is almost in ruins. Although, the Sun Temple Konark even in its available demolished state, is still a marvel to the entire world.

You may hear many interesting hypothesis about the construction of this Sun temple Konark. Some say, it was never finished and the development was left mid-way and later the half-done sanctuary slowly transformed into ruins, while others are of the feeling that it was finished in 12 years amid the rule of Narasimhadeva I.

The entrance to the temple is guarded by two enormous lions, each one murdering a war elephant and underneath the elephant is a man. According to the Hindu mythology, the lions resemble the pride, elephants resemble the wealth and both of them kill the human.

It is believed that Konark Sun Temple was at first build on the ocean bank. Now after 8 centuries later, the ocean has retreated and the temple is somewhat far from the beautiful beach of Konark.

The  800 years old Sun Temple Konark cannot just be regarded as a landmark of historical importance. It is much more than a world heritage site as it has the potential to amaze the scholars of many schools like Science, Astronomy, Maths, Physics, Chemistry, Biology, and Construction Engineering.  Also it continues to impress artists and poets. In the words of Rabindranath Tagore – “The Language of stone surpasses the language of man here.”

The ASI (Archeological Survey of India) and State Government are doing little to prevent the temple from further depletion. The maintenance work that has been carried out in the name of preservation of stone sculptures is limited to replace the sculpture with a similar looking stone without any carvings. This is the best example of Indian bureaucracy at its worst. The day is not far, when the whole temple will be replaced by sandstone without the finer carvings. When asked about why it is not being properly taken care upon, the funny answer you get is “We don’t have the skills and instruments to replicate stone carvings that existed 800 years ago.” Seems, the skills and instruments were way better in 13th Century as compared to the present 21st Century. It’s sad to see such a magnificent building go into the sands because of bureaucracy.

Every year in the month of February, Konark Dance and Music Festival is organized within the temple premises featuring Odissi dancers and sometimes noted musicians. It used to be a very good festival till few years back, but now it has turned into a local dance and music event without the famous names of Indian musicians and dancers.

Sun Temple Konark is a living testimony to the speculative, daring and the artistic sensibility of a human race that once knew how to live, love, worship and create in heroic proportions. Though Konark is turning into a ruin fast, still the magnificence of its architecture continues to amaze the visitors.

Getting There:  Best way to reach Sun temple Konark is from Puri, about 32 kilometers (45 minutes) drive via the Marine Drive. It can be also reached from the capital city Bhubaneswar by car in about an hour. Trains are only up to Puri or Bhubaneswar. Nearest airport is Bhubaneswar Airport which is well-connected with Delhi and Kolkata.

This Sun Temple Konark, a symbol of India’s ancient architectural skills was completed in 12 years (1243-1255 AD) with the help of 1200 workers. Beautifully designed as a chariot mounted on 24 wheels, each of diameters about 10 feet decorated by most exquisite stone carvings, and drawn by 7 strong horses, it boasts of India’s rich cultural heritage. 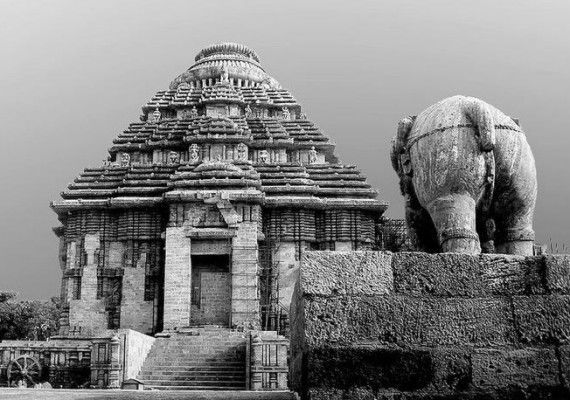