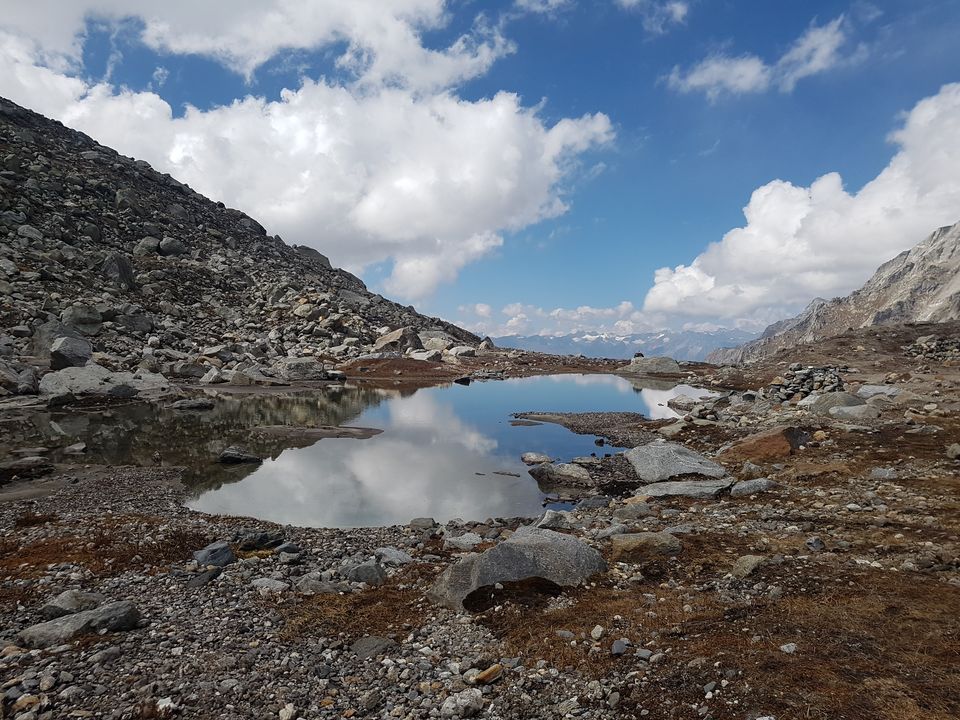 Chota Chander Tal, a Tarn (Glacier Pool) in Duhangan Valley in Kullu District, Himachal Pradesh near which many teams often set their camps for Mt. Deo Tibba (6001 m), Mt. Indrasan (6221 m), Mt. Norbu (5415 m) and many other Expedition. On 1st October 2017, a team from Kolkata started their journey by Punjab Mail from Howrah Railway Station. A total of 10 members of which 2 members who successfully completed their Basic Mountaineering Course from ABVIMAS, Manali, the previous month, were already there at Manali. The rest 8 members joined them on 3rd October and the team checked in a hotel. The leader of the team completed his Basic and Advance Mountaineering Course from HMI, Darjeeling, Search and Rescue Course from NIM, Uttarkashi and Alpine Climbing Course from ABVIMAS, Manali, and has an experience in mountaineering for the past 19 years. On the fourth day of the month, we started packing our ration and distributed the loads according to the number of mules. We have a local guardian at Jagatsukh, Tikkam Ram, whose son Arun Ram will accompany us the whole trek.

The team started on 5th October from Manali via Jagatsukh where we had our breakfast at Tikkam Ji's House. After having Apples we started heading towards 12000RD by a Qualis and a Pickup Van from where the trek will start. Four Mules(Horses) were waiting for us at 12000RD with Heeralal Ji, who is the Mule Handler. His mules were there at the expedition of Mt. Ali Ratni Tibba organized by our association Himapathik on 2015. The mules were loaded with our Ration and some necessary goods of Heeralal Ji. The team started their trek at around 12:00hrs, walking along the right bank of Duhangan Nala. Our first Transit Camp will be at Chikka. The team reached Chikka at around 13:30 hrs where we made a makeshift Kitchen Tent and pitched the members' tents.

Following the orders of the Quarter Master, we had our evening snacks and prepared the dinner. We had an early dinner as we have to move the Seri the very next day. Dismantling the tents and re packing our rucksacks was a daily morning task.

After visiting the Nagdevi Mandir at Chikka, the team started for Seri at 9:30hrs. The gradient was not so steep. Walking up and down the gradual gradient slope, the team reached Seri at around 17:30hrs. Some of the members who reached early, pitched the Kitchen Tent and prepared tea for the rest while the others pitched the Members' Tents. The sky was clear and there was a nice pink shadow on the snow covered mountains reflected over the tributaries of the Duhangan Nala.

After getting fresh, the members started preparing for the dinner and had it at around 21:00hrs. The plan was that the team will head towards Tainta the next day, but after getting up early in the morning, the Leader declared that it was a rest day. Within a few minutes, all the tired and shrunken faces were converted to satisfactory and happy smile. Some members explored the area while the others re packed the ration for the following days.

On the Lunch, we had Dalia Pulao and Scrambled Egg made by our very own Leader. After that we had some knot practice and shared some experiences during the Course days. The pink shadows again got reflected on the nearby water bodies since it was already dusk. The team had their snacks inside the kitchen tent and started preparing for the dinner. During the dinner preparation, the leader told his plan for the next day where we have to reach Tainta after crossing some river tributaries and negotiating a steep slope. After having dinner, the members went to sleep dreaming to negotiate the steep slope which was clearly visible from the campsite. It was 5:00hrs and Heeralal Ji went to find his Mules who went here and there to search for food. After Mule loading, the team started to trek towards Tainta. Crossing a tributary, the team reached the region from where they have to ascend the steep slope. The team reached a cwm featured region after ascending the slope, where we have to cross another tributary.

Now Mt. Norbu, the great Duhangan Col and the Duhangan Wall was clearly visible on the East side. On reaching Tainta, we saw the tents of Special Advance Mountaineering Course of ABVIMAS pitched who were for Mt. Deo Tibba Expedition. So by not disturbing them, we pitched our tents far from their campsite with a water source nearby.

It was 16:00hrs when the clouds covered the snow filled mountain tops and the glaciers. The next day we have to head towards Chota Chander Tal and have to be back to Tainta as early as possible. So the team had an early dinner and went to sleep.

Waking up the following day, the leader decided not to start until the Sun arises, as it was a Mixed Composed Team. The reason was simple. As the Duhangan Nala is flowing over the debris and the small stones, there would be Verglas developed over the exposed rock surfaces. As the sun rises above the Duhangan Col, the team started to move with their daypacks.

After an hour of trek, the team reached a place where there was a pile of stones which was the kitchen tent when a team from our association came for Mt. Deo Tibba Expedition on 2006. We spent some time there for a while hearing about the 2006 expedition facts from our Leader who was one of the members who summited Mt. Deo Tibba then. Then we reached a Terminal Moraine zone which we negotiated to reach Chota Chander Tal. There was a Tarn ( a glacier pool or lake) with some stones piled and coloured flags.

It was our final destination upto which we will ascend. The clock was ticking and we have to descend down as soon as possible because the weather started to deteriorate. Just as we descended down to our campsite at Tainta, Snowflakes and gradually Snow Globules started to fall. It fell for 4 hours and when we were out of our tents,it was 19:00hrs and the campsite was covered with Snow Globules.

We started preparing our dinner where Heeralal Ji and Arun Bhaiya was entertaining us with their hilarious stories. We had our dinner at 21:00hrs and went to sleep. The following day we have to descend down as far as we can. So the next morning after dismantling the campsite and loading the Mules, we started to descend. The weather was clear but the steep route where Sun rays had not penetrated then was covered with snow globules. So the members have to walk very carefully on the slope. Then by crossing the tributaries, we reached the flat and moist land of Seri over which we have to descend. It was 13:00hrs and again the weather started deteriorating. So the Leader decided to make a Transit Camp at Duddu.

There was another team at Duddu camping there who will head up to Chota Chander Tal on the following days. It was a moist land and we pitched our tents far from the other party's tents. A nice place it was. Dividing the members' tents and the Kitchen Tent was a stream of water from where we used water to drink. As we pitched our tents, Snow Globules again started to fall. So the members got in the Kitchen Tent and had Coffee and were singing songs. There was a plan of Campfire that night but the Snow Globules did not let us execute our plan. No issues with that. We had a great dinner that night and after the songs episode, everyone went to sleep at around 22:00hrs.

The next morning we headed towards 12000RD via Chikka. On the way back, I met some of my Course mates - senior and batch mates who were heading for Mt. Deo Tibba Expedition. We finally descended at 12000RD where Tikkam Ji came with his Pickup Van and Qualis to pick us up to Manali. We started from 12000RD at around 14:00hrs and reached Manali by 16:00hrs picking our left luggages from Tikkam Ji's House. We stayed at the same hotel we checked in since we were about to start our trek. We arranged tickets for our return journey and the team finally returned to Kolkata on 16th October 2017.