Bylakuppe – In pursuit of peace

Chasing the light at Bylakuppe. 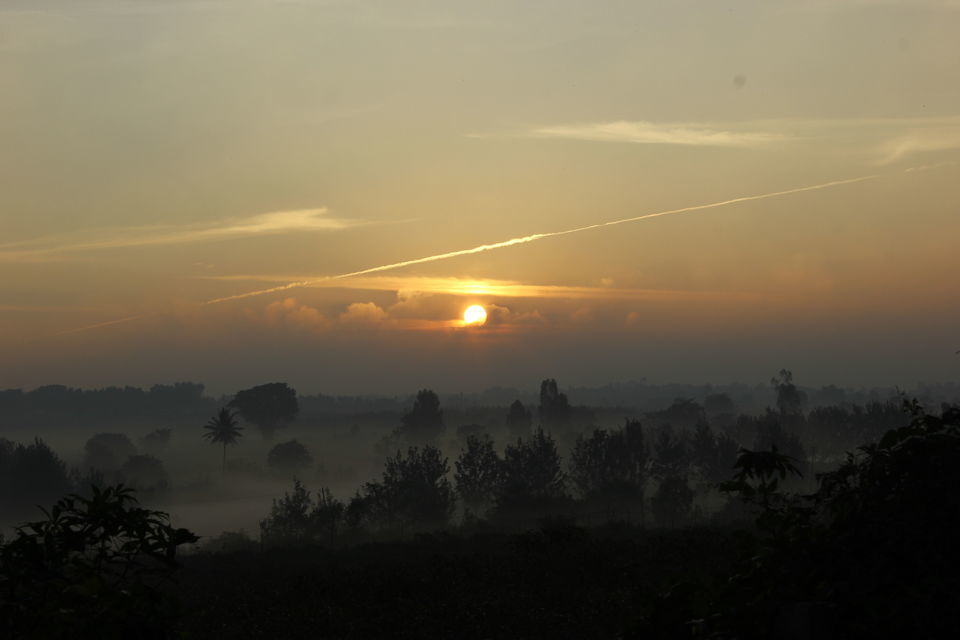 #CoffeeWithTripoto I have so many travel stories and I always felt I never had the right platform to describe my experiences. And that's when I discovered Tripoto. It's my first post here and now I've decided to put all my travel stories here and spam everyone! I'm the sort of traveller who tries to discover the underrated experiences in a place, and meeting the locals and discovering hidden places is my favourite.

It would be great if I get to meet you guys through this contest! Hope you all like the personalised stories I have to share.

The cold wind blew past our faces as the bullet picked up in speed. It wasn’t too early in the morning – just past half past 6 AM – but it was cold. It was the 29th of December, 2015, and we were racing against time to reach Bylakuppe. It had been my dream for several years to revisit the place. I’d been there once before as a kid with my parents and I loved the atmosphere: the monks, the sense of peace, the climate, the monastery, and the Golden Temple.

We had 240 kilometers to cover. In a car, it would be possible to cover that in three hours. But, we were on a bike and we had to clock over a 100 kmph to make it in the same time. I think I’d like to say at this point that I love the Royal Enfield Classic and Bullet. My friend’s Classic 350 was apt for this ride and the two us took turns riding the bike to get there.

The first day we got there, we were surprised to see the place filled with an unusually large number of monks. We later learned that that Buddhists from all over the world were flying down to Bylakuppe to meet the Dalai Lama. Apparently, this was some religious period for them and the Dalai Lama is known to visit Buddhist places and pray with them. 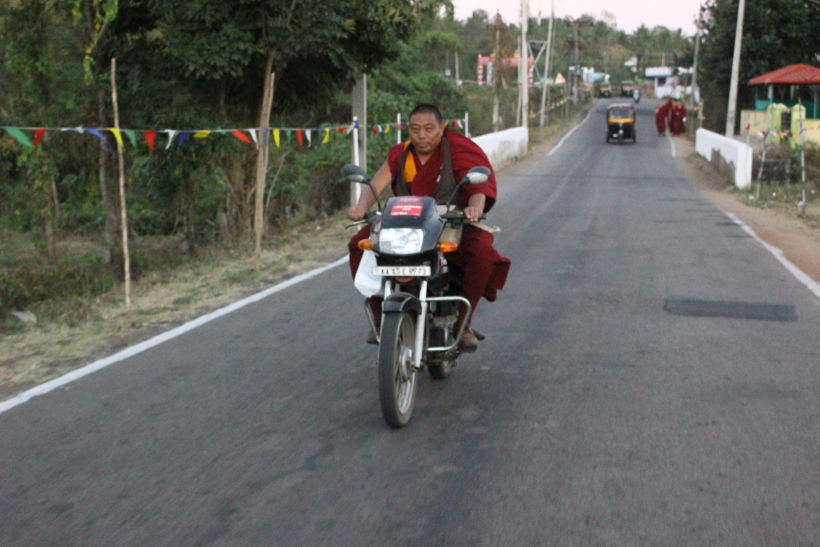 We managed to book a room in a monastery. We were literally surrounded by monks every minute. Our room was next to a cafe in the monastery (they mostly served fruit juice and cake) and it seemed to us that we were staying in the most happening place in Bylakuppe!

Our monastery was a good 9 km away from the Kushalnagar highway. This meant that if we needed to buy anything, we had to travel at least 6 km. They did have a few provision stores but apart from the bare essentials, they didn’t stock up on anything else.

We were starving the day we arrived at Bylakuppe. The moment we dropped our bags off at the monastery, we headed back out hunting for a place to eat. We stopped at the first Tibetan restaurant we saw and glanced at the menu. We didn’t understand a word. We figured we’d just order what we already knew – chicken fried momos, one veg noodles, and chicken noodles. 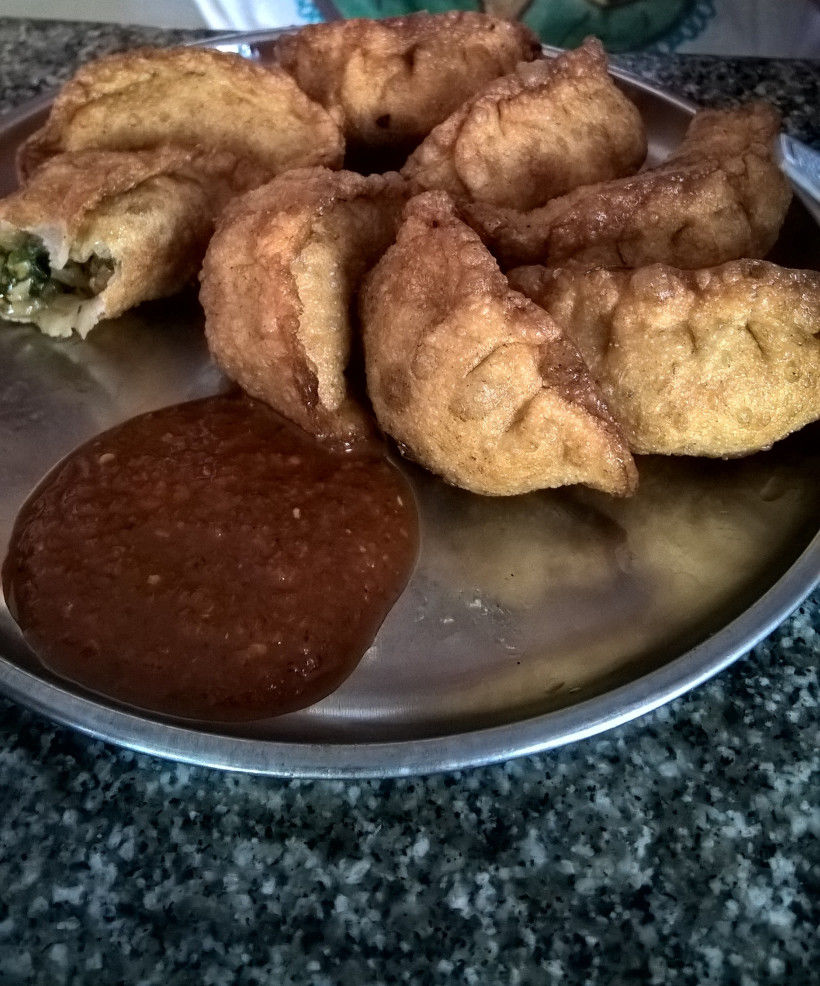 The fried momos were good but the noodles were soupy noodles! I’m not really a fan of soupy noodles but while I can bear it, I can’t bear it being bland. It was literally boiled vegetables and noodles in water. No salt, no pepper, no spice, nothing! My friend laughed at me as he ate his noodles with chopsticks. His was bland too, but being a foodie, he didn’t mind experimenting. What can I say? I love my Maggi. 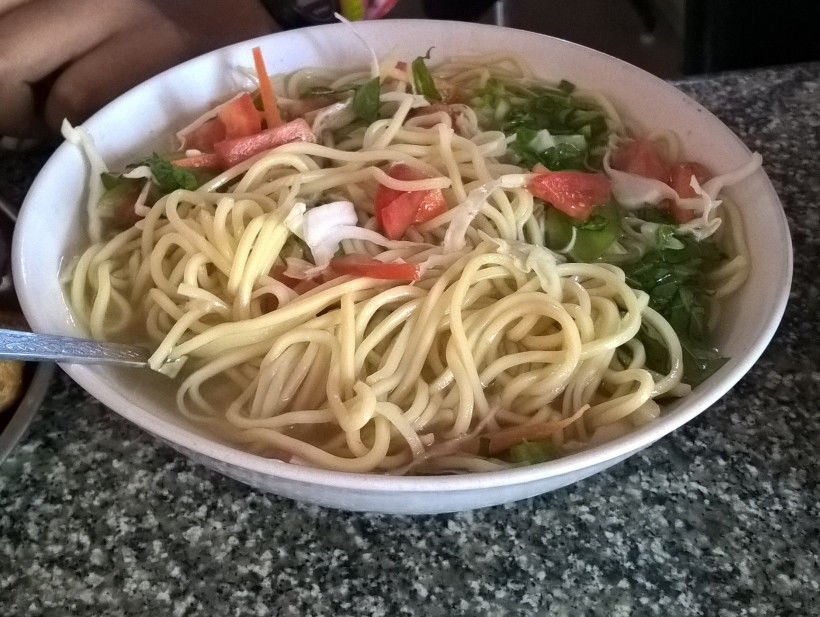 I had visited the Golden Temple as a kid and I had just fleeting memories of the place. I did remember the peaceful vibe and I was itching to re-experience it. We headed towards the temple and realized that it was too late. They had closed. We went around the temple premises and took a couple of photos. But, I wasn’t satisfied. I wanted to go in. We decided we’d discover other places and started to head back. 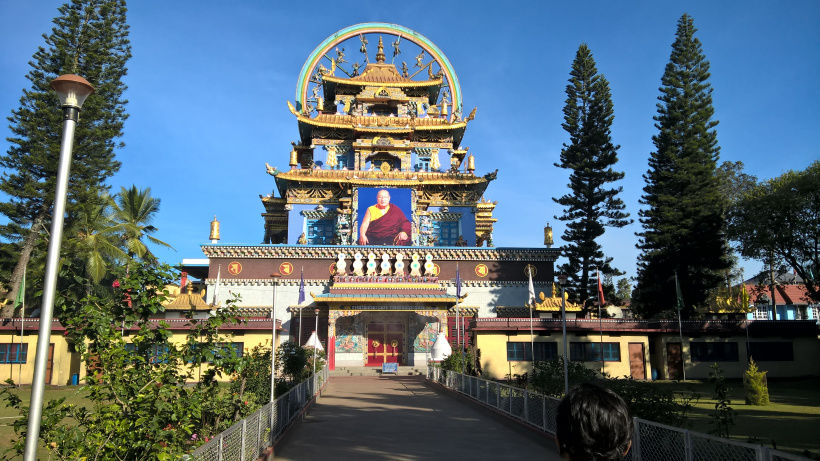 We began riding back and just as I was lamenting about how we missed the chance to go the Golden Temple and see Buddha, my friend realized we’d taken the wrong turn. It was still bright and the sun had only just begun to set, so we decided to explore. We continued on the wrong turn we’d taken and the road sloped upwards to a clearing.

What surprised us about this location wasn’t just that it didn’t feel like we were in Karnataka, it felt like it was a different country. There were at least 50 buddhist men, women, and children sitting in a circle in this clearing. A group of men and women stood in the middle of this clearing singing songs and dancing. I couldn’t understand a word of what they were singing. They had on their traditional clothes – even the kids. Every once in a while, they would all start laughing and stop dancing. After the first three times, my friend and I exchanged confused looks. We definitely felt out of place. We had no clue what was going on … and yet, it all looked very serene and peaceful. 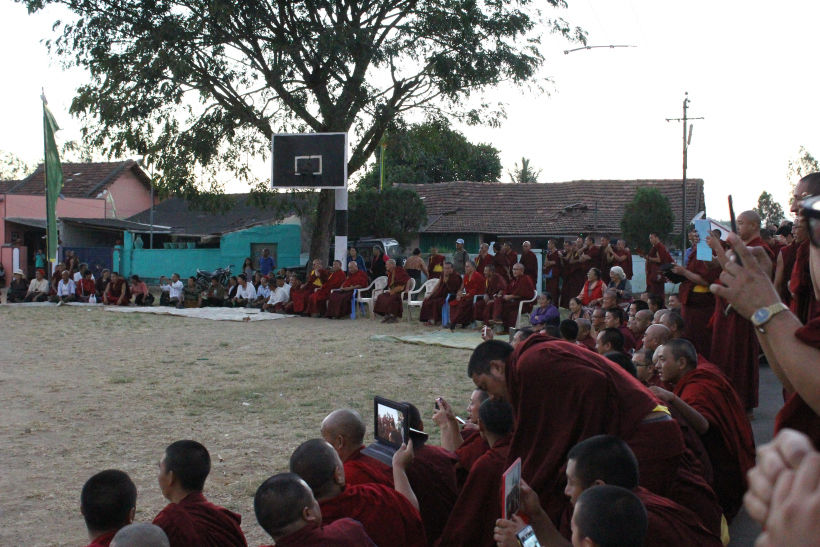 Right in the middle of the clearing they had bottles of – wait for it – coke, sprite, and thums up. After a while, they went around offering it anyone standing and watching. I wasn’t sure if it was rude to accept – or decline – their offer, but I declined. I found a girl around my age sitting a few feet away from me. I decided that if we were going to stay here and watch them entertain everyone, I needed to know what was going on. She looked differently dressed too – in jeans and t-shirt – and I figured,she was probably a student who had come to visit her family.

I was right. I sat next to her and began to talking to her about where we were from and she introduced me to her family. She told me she was doing her MBA in a college in Bangalore not too far from my place. And I love my city. So we struck up a conversation about the Buddhist culture and I badgered her with my questions during the entire trip. 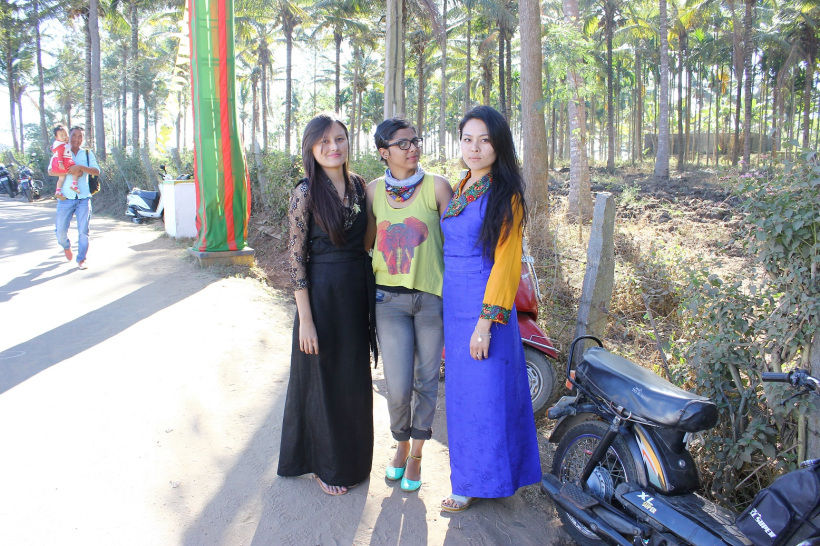 She’s a sweet girl, the one in black; she was patient enough to explain everything she knew. She even offered to take us around the next evening to get some good food (since she would know that Thupka is soupy noodles!) We agreed and watched them laugh and dance till the sun went down.

This is where my friend and I made our second mistake.

We headed back to our room, relaxed for a bit and decided to eat an early dinner by 8:30 PM. We stepped out and the entire place was pitch black. None of the places were open. We rode towards the Golden Temple and found just one place open. He was non-Buddhist and he explained to us that everything shuts off by 8. Restaurants take their last order by 7:45 PM. Stumped, we ate what he had and rode back to our room. Also this guy was more expensive than the other restaurants, but didn’t have any other choice.

The next day, we decided to ride out towards Dubare Elephant Reserve. I absolutely love elephants! 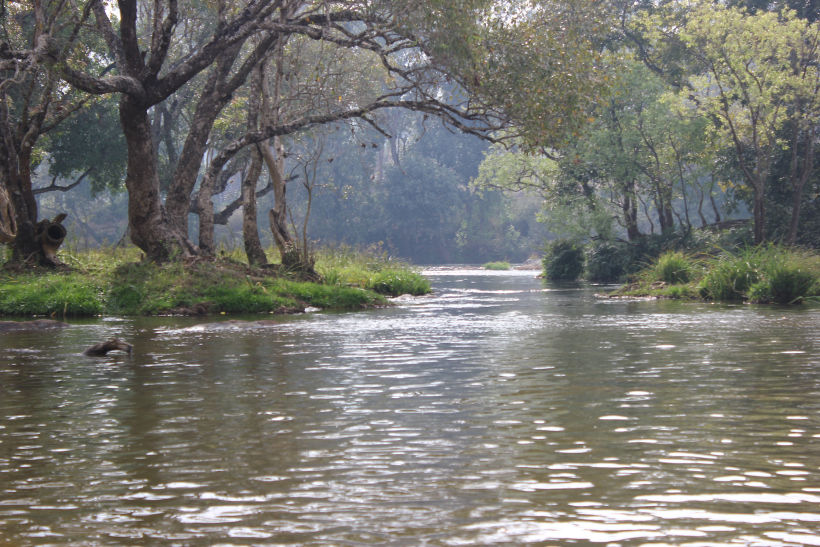 We crossed this river, bathed elephants (amidst two very naughty elephant calves), went for an elephant ride, and spent several hours in the company of one loving Mythali, a female elephant who felt like a mother to me, and her youngling, Prithvi, who went around stealing food and playfully bumping into people. 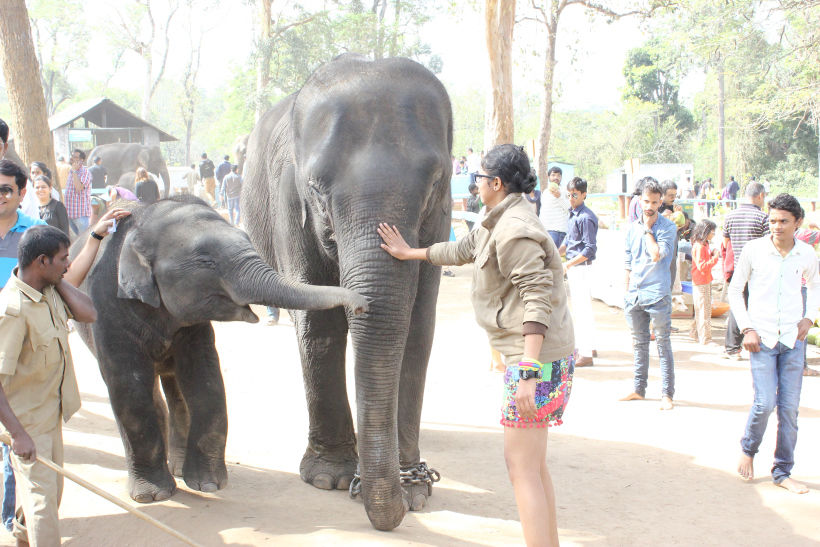 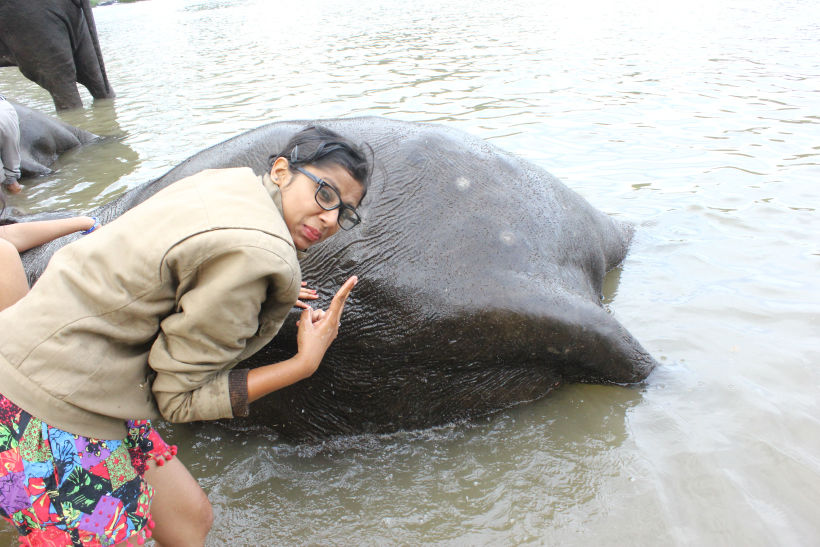 I wasn’t too pleased with cleaning this elephant’s bottom, but I loved how I could touch them without worrying about getting stomped on.

That evening, we met our new friends and went out to eat momos in the evening. That basically ended up being our dinner. At this point, I was really beginning to miss my Maggi.

The next morning, we woke up early and headed to the Golden Temple. I wanted to go particularly early to listen to them praying and chanting. We had to be there by 5:45-6 AM. And we made it. While my friend went around taking photos with his camera, I sat at the foot of the shrine and listened to them chant. They use a combination of instruments and chanting in any prayer of theirs. Some type of trumpet or wind instrument along with some percussion instruments.

The Buddhist kids were adorable! Especially the one who felt he was too cool to pose in a selfie with me. “Bahut galat, bahut galat,” he said, as he walked away shaking his tiny head. 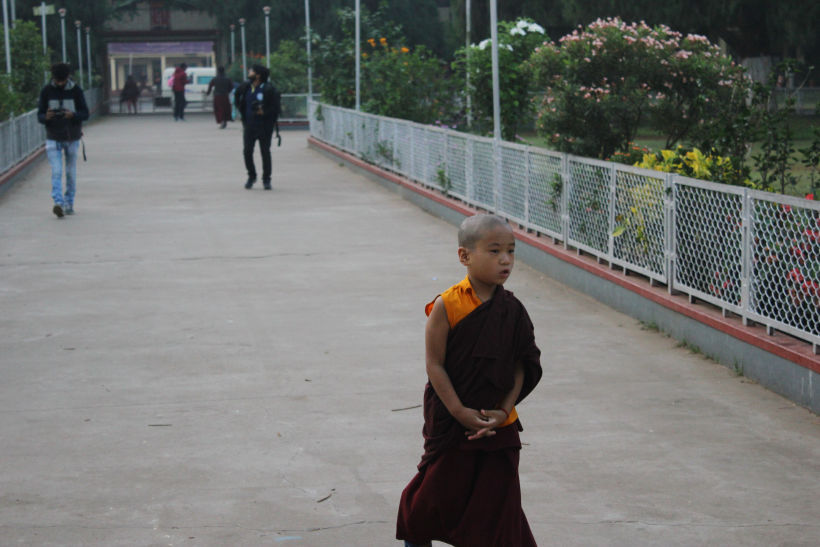 We visited Nisargadhama, and even rode up till Madikeri (to meet another friend of mine). The ride was beautiful and on a bullet, all you can feel is the power of the engine underneath you, and the silence of the green trees all around you. We visited Raja seat and the usual attractions in Madikeri. I even got a ride in the toy train there! :)

We did eventually get to see Dalai Lama, but it was from a great distance. Hundreds of Buddhists and families sat before him and listened intently as he spoke with his deep voice. Every now and then, he would laugh and everyone would laugh with him. 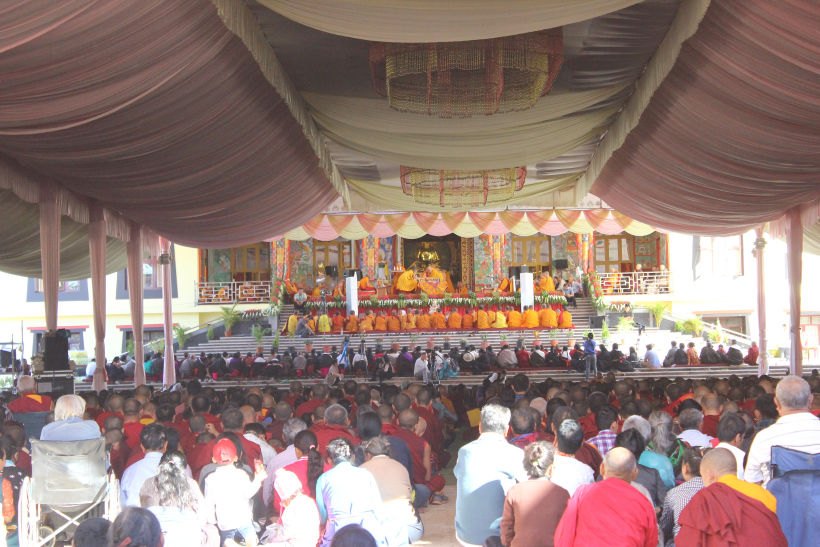 After the first ten minutes, I realized I wouldn’t be able to learn their language and understand it. I decided we’d do some shopping around the fair. A lot of people had put up stalls selling local Tibetan delicacies which I did not have the stomach to try. My friend said he would try, but I think it later “accidentally” slipped his mind. 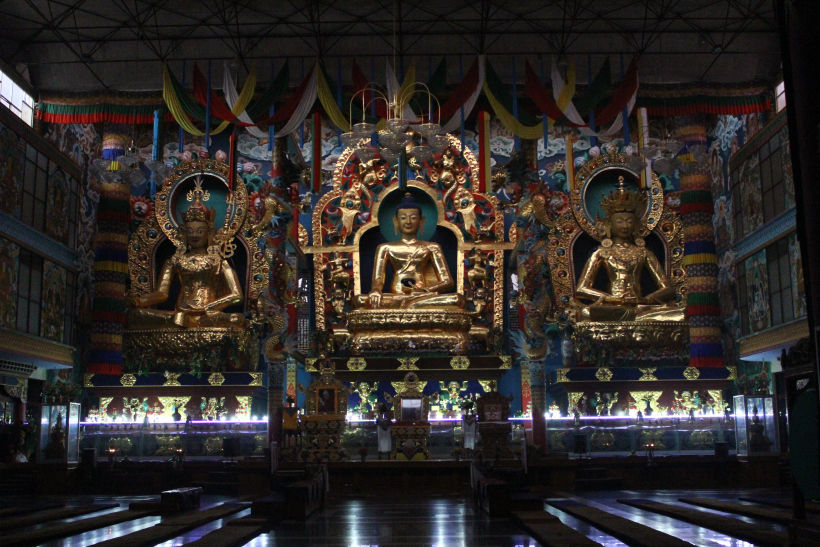 And I managed to make in time to see this. It was breathtaking to be in this hall all alone. I’m not very fond of crowds or crowded places. It explains why we decided to come here early in the morning. The quiet and the size of these structures was humbling. I spent several minutes here before heading back out … to take more photos!

On New Year’s eve, we thought that restaurants would be open at least an hour past their usual losing time. We were wrong! Our New Year’s day was just another day to them. And that’s how I welcomed 2016. By dozing off by 10:30 PM. I’m not really complaining, but it was unusual to sleep this early on a day the rest of the world is awake.

And the stars! I’m speechless everytime I think of the number of stars visible to the naked eye when one is away from the city. I couldn’t even recognize the skies anymore!

This trip is definitely one that I would cherish till I visit Bylakuppe again. Our host was extremely friendly and apologized to us while we left because the rooms were extra pricey. He explained to us that it was because the Dalai Lama was visiting and they were running full in all the rooms. Typically, the room we stayed in would cost just 30% of what we actually paid.

For those of you considering a good road trip can plan to visit Bylakuppe for sure. Since the stay and food isn’t expensive, it is extremely affordable and doable as a quick weekend getaway. If you are the type who wants to get a taste of (literally) a different culture and lifestyle, then this place must be a part of your plan. Usually, people visit the Golden Temple and drive back to Madikeri or a homestay in a nearby town. However, the experience of staying in the monastery surrounded by monks is something I will never forget … and something I will do again. 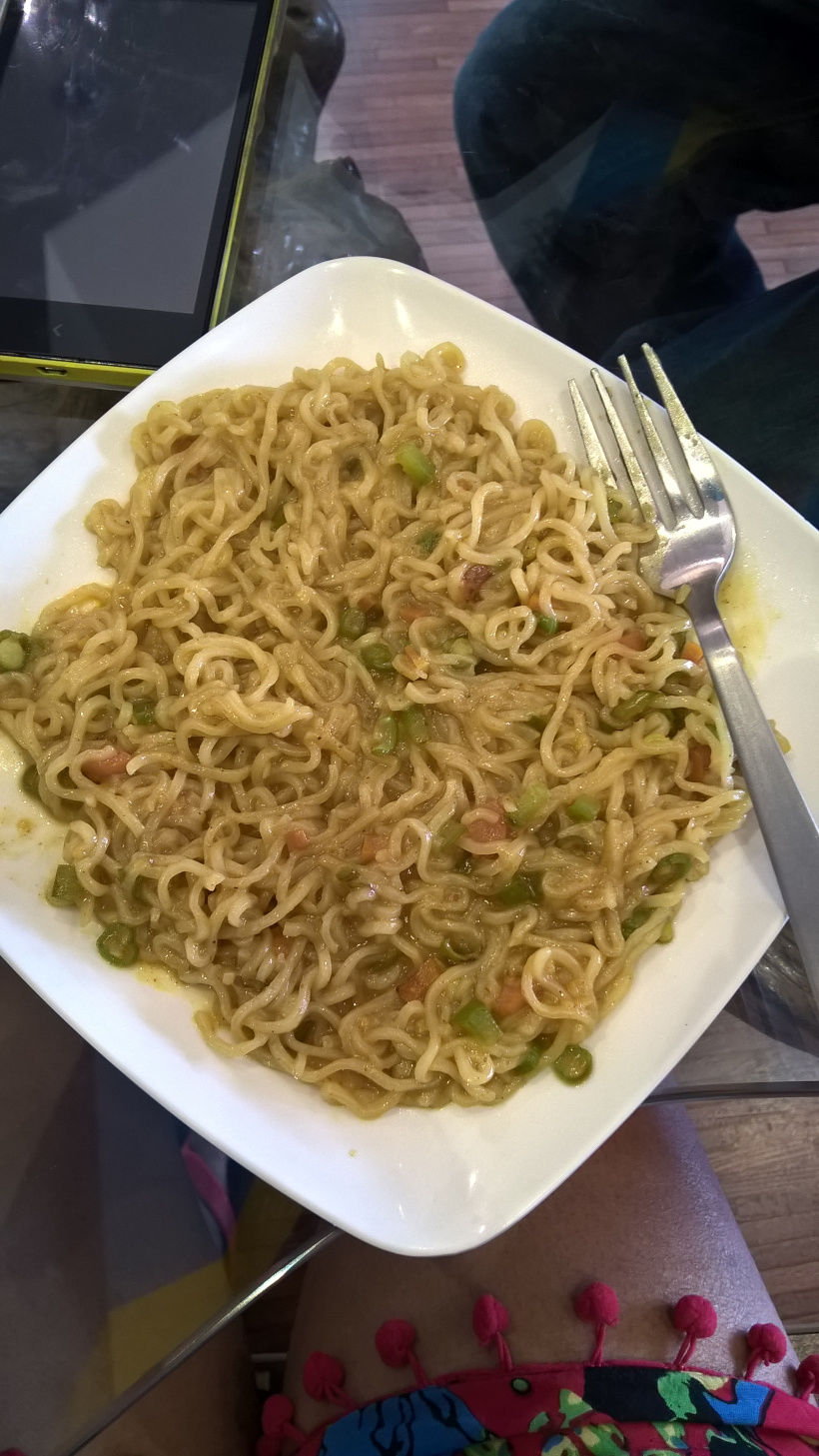 And of course, I finally found a place where they made pizza, pasta, and most importantly, Maggi!