The Winter Odyssey to Markha Valley

"The winter is brutal and unforgiving here.It will not spare you from its nerve-wrecking cold in the valley.It will get into your nerves making you shiver to the bone with its freezing air.You will be lost in the frightening silence of the mystical maze of the Markha valley.There will be no respite from the cold and you will not find even a living soul far into the distance your eyes could see.Only the echoes of your voice will follow you and the breatheless silence will be your companion. Mobile networks will not be there and the homestays are miles and miles apart.There will be no fall back option in case of a big if”.The wildlife officer in his early fifties sitting in a heated room in the Badami Bagh office told us when we approached him for wildlife permissions to enter into the Hemis high altitude national park for our Markha Valley trek. We politely told him that we visited Ladakh earlier in the winter as he looked straight into our eyes so scornfully.

It was mid-January and Leh was freezing under the spell of a falling Mercury. The bustling main bazaar of the hill town was sporting a deserted look. After getting the wildlife permission, we headed to the bazaar to buy all the stuff for our trek.As we were not taking any guide or mule with us for our trek, we were buying only the essential items to reduce the weights on our backpack.We packed our backpacks and got the map of the trail, and we were ready for our Markha trek next day.

The Markha valley trek is one of the most beautiful and picturesque trek in Ladakh.The snow clad mountains, the colourful monastries, the high altitude villages on the way, the gushing streams, the serene stupas and the haunting mountain passes en-route make it one of the most sought after treks in Ladakh.The valley is inside the Hemis high altitude National park and hence one needs wild life permission for entering the national park. In summer the scenic valley attracts a lot of adventurers for hiking due to its moderate climate and less snow coverage in the valley. But in winter, the temperature drops to the negative twenties and the snow piles up in the mountain passes making it difficult to trek in the bone-chilling cold.So, only the seasoned and hard core adventures venture into the wild winter in the Markha valley.

It was a sunny day, but the cold wind had made the winter morning a freezing one. The winter mornings are so difficult to get out of bed especially in such freezing winter. But we had to wake up early to trek during the sunny times else it would be difficult to trek in such shivering cold once the sun is down.I along with my friend Aditya was crammed into a Maruti Omni with our super-sized rucksacks for our journey to Zingchen (the starting point of our trek).The one-hour drive from the city of Leh to Zingchen passes through the beautiful spituk village.The striking landscape along the Indus river under the blue sky en-route to the Zingchen village is a visual delight.Within an hour, we reached the starting point. After bidding the cab driver goodbye, we put on all of our winter gears and strapped the rucksack on our shoulders and got ready for the trek.

There was not a single soul in sight, not even a bird was chirping.The brown mountains looked magnificent in the bright sunshine.The cold spell of the winter had robbed the landscape of its green pastures and cursed the gushing streams to freeze in that brutal cold.The naked leafless trees were standing as mute spectators waiting to be clothed on the touch of the spring.The land was so barren, and the winter was so brutal, yet the landscape was so beautiful.It was an absolute joy being out there amidst such oceanic silence and the monumental beauty deep in the mountains.Aditya is a Software Engineer working in a reputed MNC in Bangalore and is an adventure enthusiast.He loves hiking in the Himalayas.We met on the slopes of Stok Kangri two years back and ever since we became good friends.Not a single human was seen in our trail till then.We were walking in the Hemis High Altitude National Park which is the home to the endangered snow leopards.After half an hour, we passed through a camping site where a hiking team was camping for snow leopard spotting.

As we hiked the distance up the winding trail, we gained altitude, and the altitude started picking our heads. The sun started playing hide and seek with the meandering trails. With each step, the breathing got faster and with the sun playing hide and seek the cold got intense.The trek was slowly turning to a challenging one. We were venturing deep into the mountains in those lonely trails with only the echo of our voices to follow us. We were discussing the topics in the trail ranging from global politics to the effects of climate change on the Himalayas to our next trek to Gokyo Ri in Nepal.It was mid-day by then and the sun was coming out of the maze in the valley. After two hours of walking through the bouldered trails and crossing the streams, we rested at a sun spot to refill our energy with energy bars and drinks.

After a brief halt, we walked again.After an hour, we reached the Rumbak point. There is a wooden map fixed on the wall of a tea house to help the hikers to read the trails. From there the trail on the left goes towards Rumbak and the trail to Yurutse goes straight for some distance and then right.It was still 5-6 km to our homestay for the day.We rested a little again at the Rumbak point and enjoyed the stunning view of the magnificent mountains all around. It was late noon, and we started walking again and this time, we had to walk over a frozen stream for quite a distance till the point of right turn for Yurutse. The sun was slowly getting ready for the dusk, and we were approaching the valley towards Yurutse.The cold started rushing into the valley with full force, and I was feeling so tired by then.The weight of the rucksack on my back had already slowed down my steps.I was walking at my own pace on the battering cold and with the back-breaking backpack.

I was like limping and literally struggling for each step.The rucksack on my back weighed on me heavily with the increase in altitude.The sun was down in the entire valley from the Rumbak towards Yurutse.The mercury was slipping fast, and the wind was catching slowly.The body was tired by then, and it became so difficult to walk in such cold.I checked my watch to see the temp, and it was -19-degree centigrade.We had just taken a turn towards Yurutse village which is 3-4 km uphill. Aditya was walking on the frozen stream, and I was walking on the trail along the ridge. I was gasping for breath with each step and wanted a respite from the cold. The fingers and the toes became numb as the clock moved towards early evening.There was no fallback option, and the only option was to move to the next homestay.The homestays on the back were far behind, and there was nothing and absolutely nothing to take shelter within that radius. We had tents and sleeping bags with us, but Aditya advised not to camp outside in such cold as the temp was to slip further down in the night. With each step i was dying to see that glance of the homestay which was not even in the sight.

We walked on and on turning right and left and climbing and descending on the trail. The moon started appearing in the sky. That was the day before the full moon night. I was not able to feel my right-hand fingers by then.It was totally numb in the cold.The wind was sweeping through the valley wide and open. After walking almost two hours, we saw a clay coloured single home on the bank of the frozen stream in the middle of nowhere standing tall among the mountain peaks all around.I was tired to the hilt by then and was stopping every five steps in between.It was 500 meters more to the homestay but i was extremely tired.I unstrapped my rucksack and put it down in the middle of the trail and walked to the homestay.The homestay owner had fired the Bukhari (the fire pit) in the guest room.I removed my gloves and warmed my hands before the fire.It took more than 20 minutes for my right-hand fingers to come to normalcy.Sipping a cup of hot Kawaw I slept there wrapping two layers of a blanket over me looking over the snow clad mountains from the window in that lonely homestay deep in the Markha valley. It was a tough day yet a beautiful and adventurous trek in the Markha Valley.

This trip was originally published on thefreedomsoul 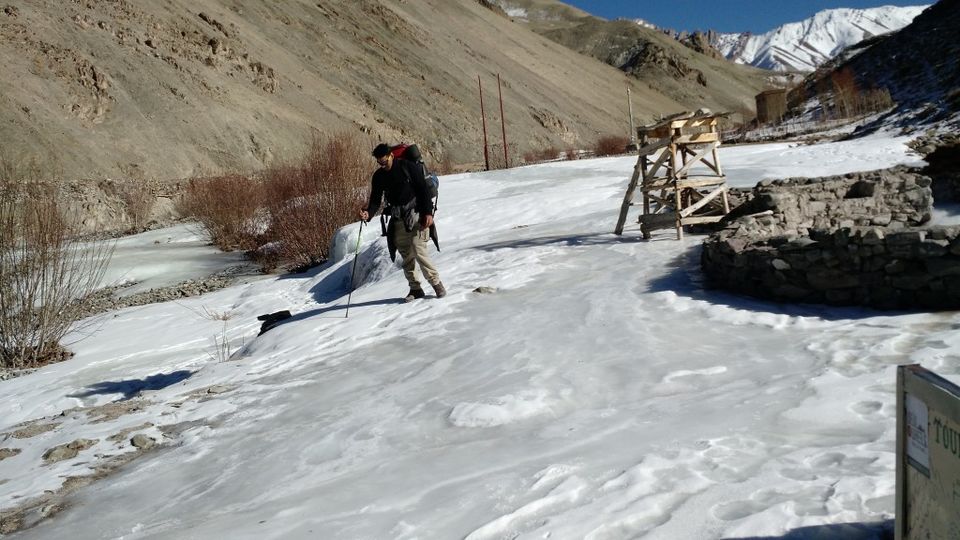 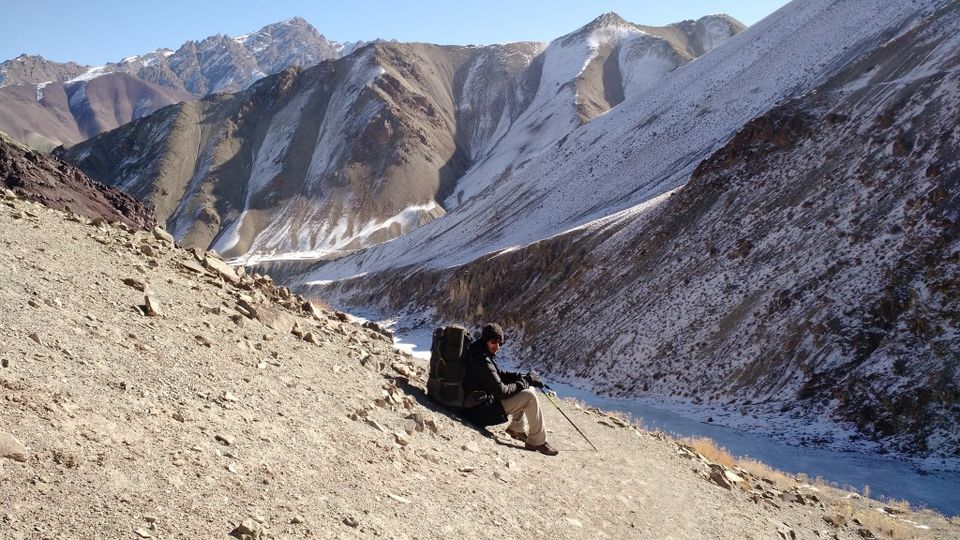