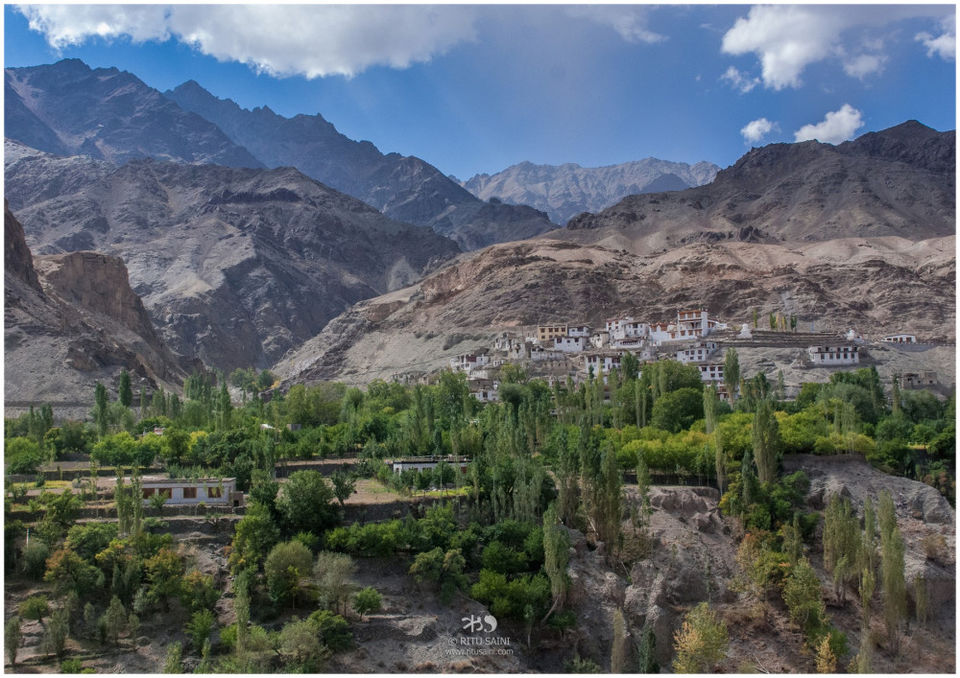 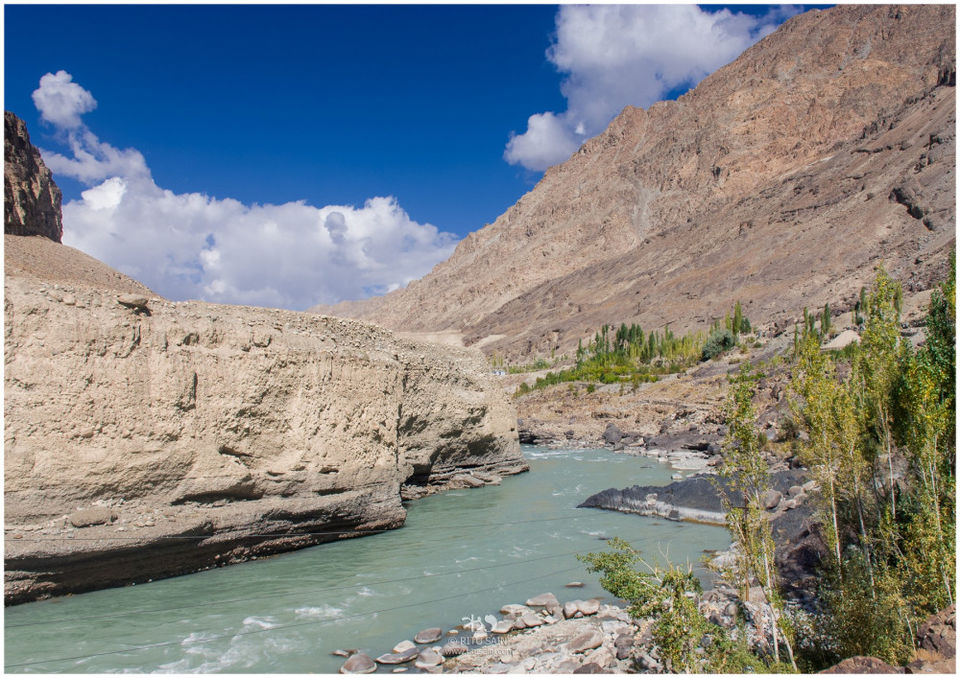 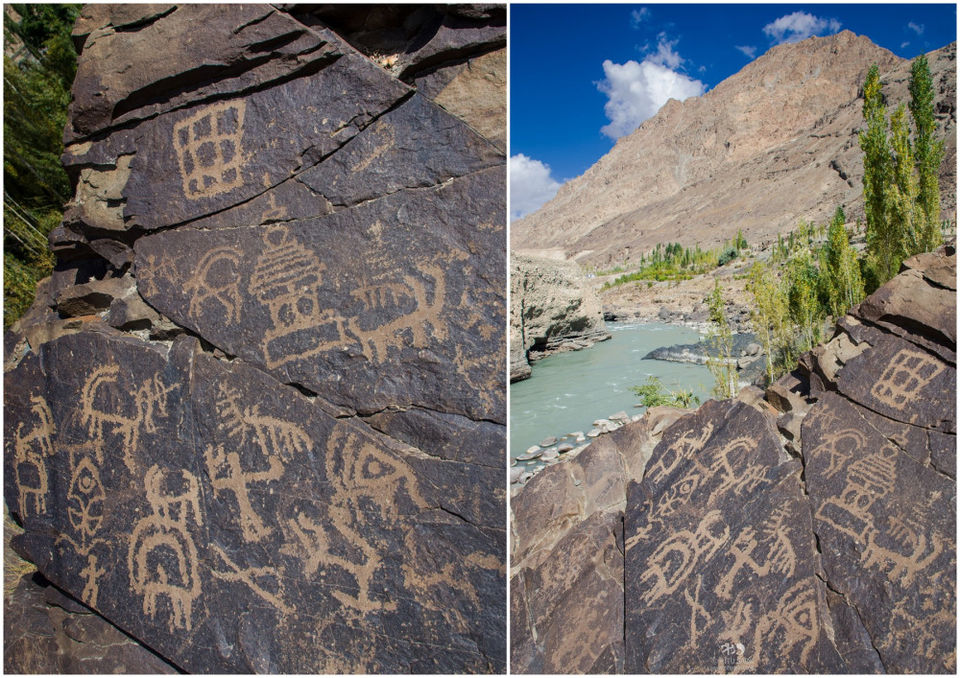 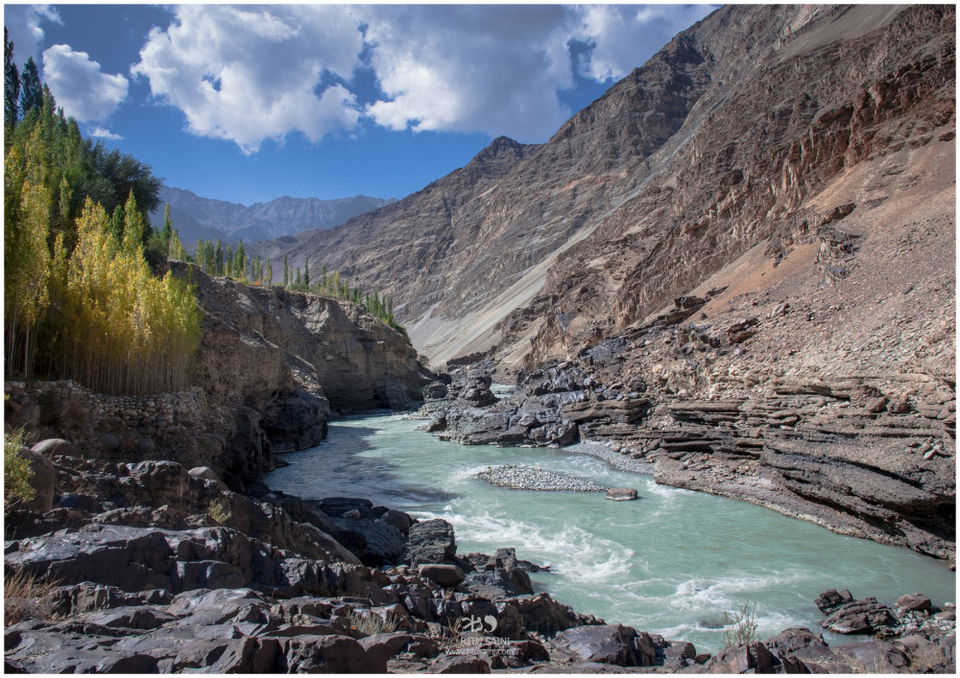 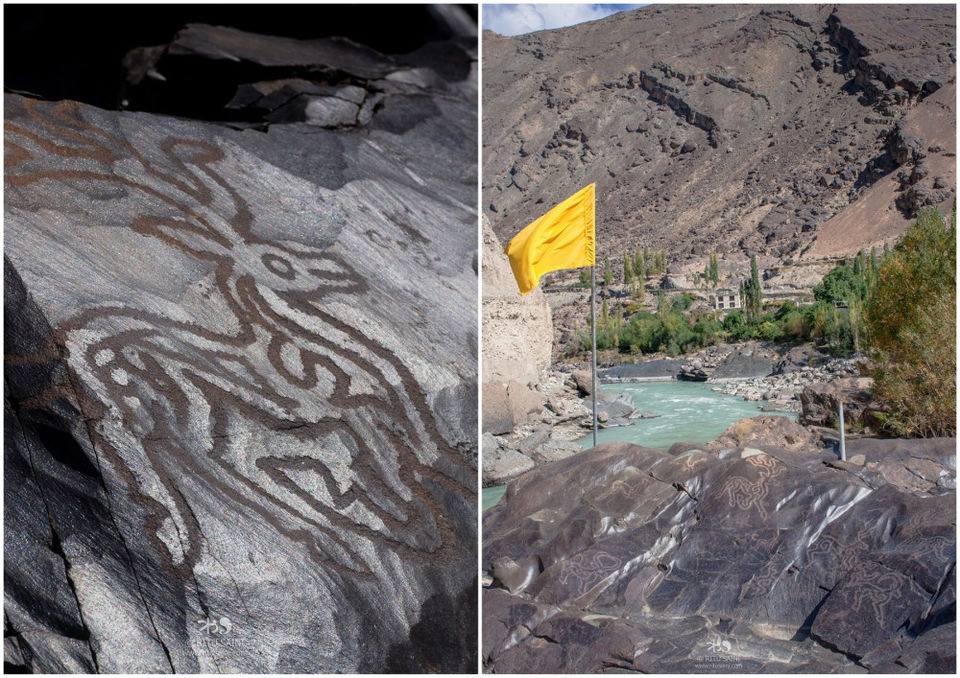 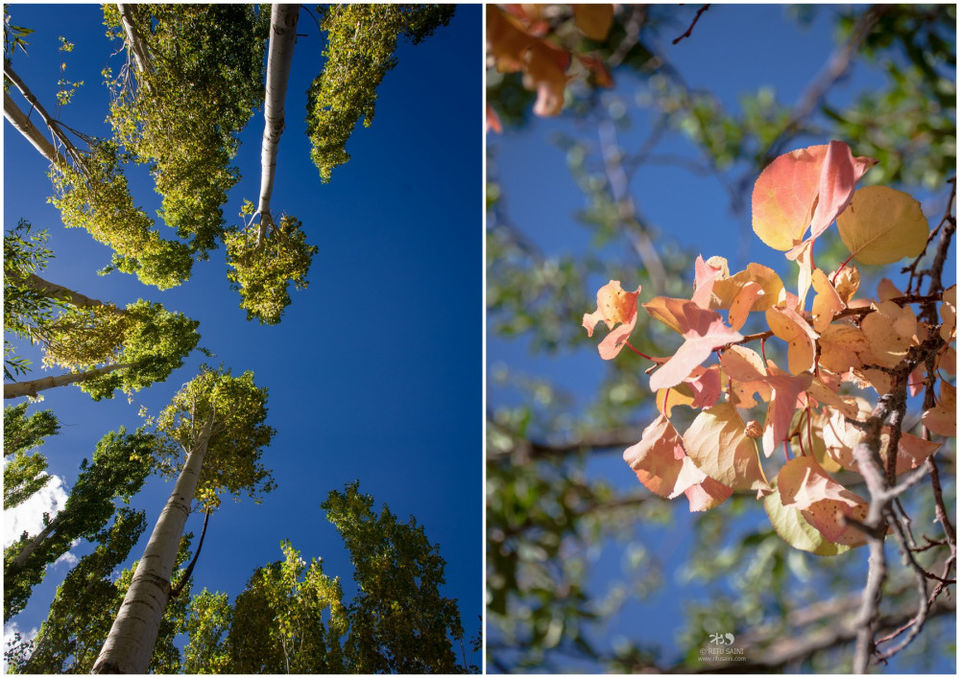 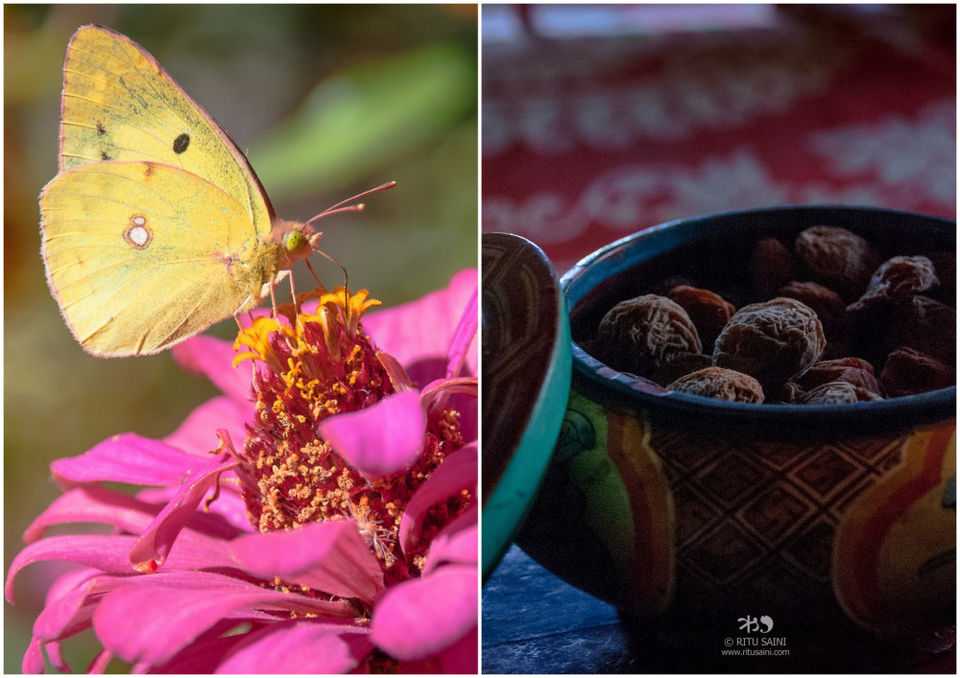 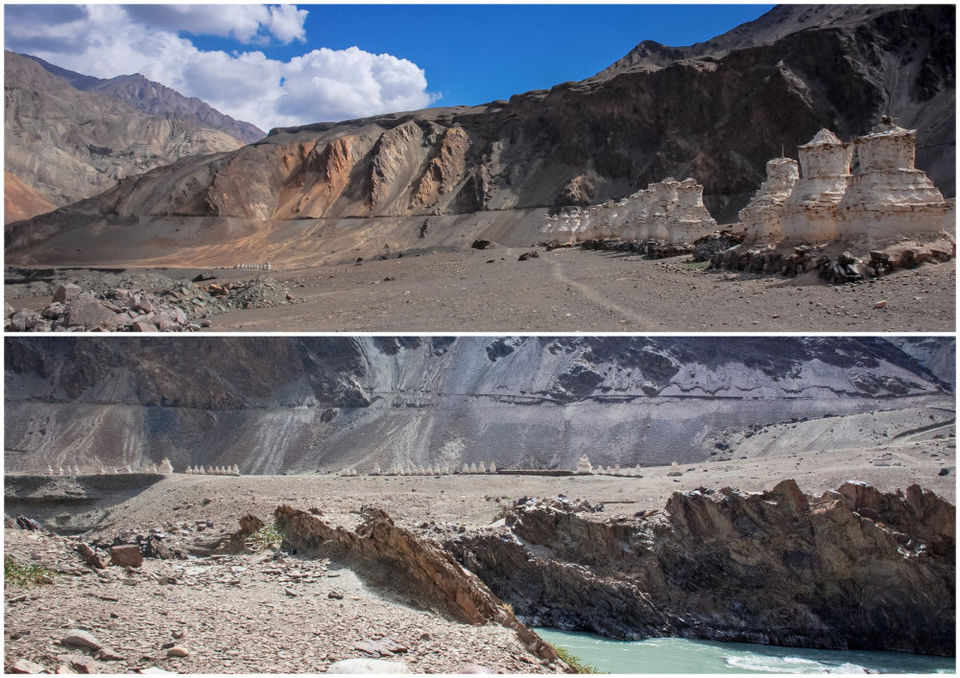 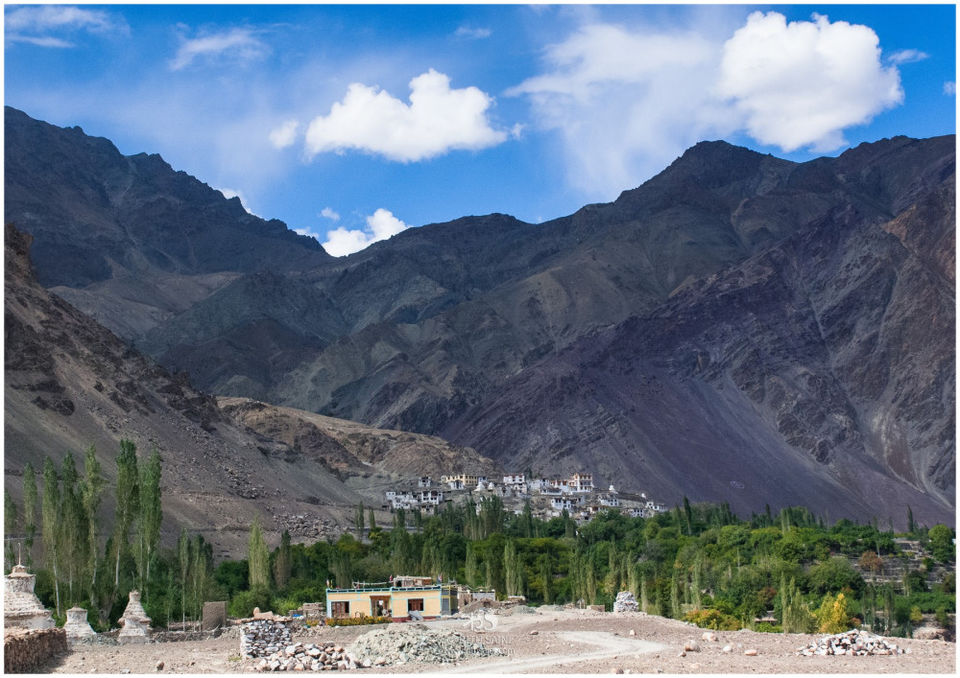 Ladakh is famous for it’s stunning landscapes, peaceful & heartwarming people, dangerous mountain passes, extreme weather, pristine high-altitude mountain lakes, unique wildlife and gorgeous ancient monasteries, but in this remote land there lies another hidden treasure thousands of years old…the prehistoric Rock Art paintings – some of the earliest expressions of our species, our artistic and cultural beginnings! These rock art paintings or petroglyphs are images created by removing part of a rock surface by incising, picking, carving, or abrading and some of these have been dated to around 3000 BC!

I had never heard about the rock art at Domkhar and there aren’t many resources about how to get there but since we were on a “Ride of a lifetime” in the Himalayas, we decided to check it out, as it would be a small detour. Domkhar is on the Khalste – Batalik route between Kargil and Leh. (More details on how to reach below.)

Domkhar is a small village in Domkhar valley about 120 kilometers away from Leh. Surrounded by harsh rocky towering mountains the Sanctuary is by the Indus river, and one of the richest sites of rock art in Ladakh. Open to public since Dec 2012, it has been made into a Rock Art Heritage Garden for visitors to enjoy. With colorful flowers, fluttering butterflies and fruit trees planted around, you can enjoy a cup of tea while you walk around this open garden museum of rock art. We were generously served some dried apricots among other fruits picked from their garden.

Most of the art is on the rocks that are by the river. Some of the rocks from nearby places have also been placed here for protection. It’s a great place to just relax, enjoy the calm beauty of the place and wonder what it would be like to live here thousands of years ago when these rock art paintings were made.

Ladakh’s rock art is divided into three classes. The first is found from central Ladakh up to Mount Kailash. The second class of rock art, from Khaltse to the west of the Indus river, is more refined and seems to have been influenced by the art of Sogdia, an ancient kingdom near Khotan in Central Asia. The third class includes the petroglyphs from Zanskar river to the south, which seem to be more like Indian rock art. There are also some Chinese inscriptions. Sham, Zanskar, Basgo, Likir, Alchi, Nubra, and Tangtse are some other places in Ladakh with records of such art. Only some of this rock art in Ladakh has been studied, and dated to around 3000 BC. These could help in understanding the role played by this mountainous region as a cultural crossroads from prehistory to present day.

A scholar of rock art writes about Domkhar,“This site is indeed a true gold mine for scientists and a possible key to better understand the ancient past of the lower Indus valley and thus potentially throw light on the ancient history of Ladakh, which up to present remains almost unknown”. More about the petroglyphs Ladakh studies and here.
How to reach – Domkhar is a detour from the Srinagar – Leh National Highway (NH1), on the Khalste – Batalik route between Kargil and Leh. From Lamayuru just before Khalsi there is a left turn to Skurbuchan/ Dah/ Batalik. After crossing the Indus river take the left detour, a tar road runs along the meandering river on the left. A few kilometers down the road there are white stone chortens arranged in a line next to a small village called Takmachik across the river connected via a bridge. Domkhar Santuary is just another few kilometers ahead from here. Please refer to the map from Maps.me – a great app for offline maps while travelling. (Google maps refers to Domkhar as Dumkbar)

Due to construction of roads and general development around the National Highway, some of the rocks have been lost but most have been relocated and are now protected at the Domkhar Sanctuary. These paintings with aesthetic & historic relevance could help us unravel our past. But sadly this heritage has been neglected and at many places been damaged and vandalized. I hope we travelers together with the Ladakhis can help keep and protect this treasure as we enjoy its ethereal beauty.