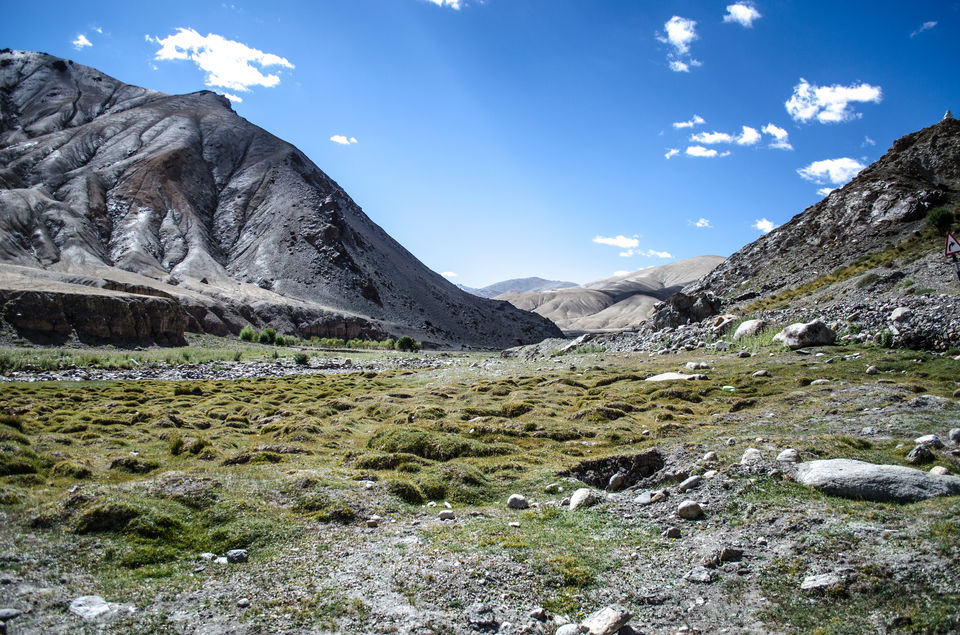 Going to Ladakh would have been everyone’s dream. Now, would you go to the places already being commercialised for tourists or being a traveller, would you like to explore the off-road tracks and experience things which you never did so far. We favoured the later part of experience. Going south of Leh 180 kms, we started our journey with our pick up truck early morning. The sun was just about to rise and after taking our food supplies & other basic stuff, we left the main city and wandered towards south of Leh.

From the beginning itself, we were greeted by radiant and breath-taking view of mountain ranges situated on both sides of road and we couldn’t resist to stop continuously in between to take shots. And trust me, more than taking shots, we wanted to just stay still and grasp the beauty shown to us. It was more of a no man’s land where the view will only consist of natural structures and no man made construction being shown. Moving forward, we took our first stop at Leh’s last petrol pump and ate our breakfast. Just nearby, the river Indus was flowing with high rapids and the sound of waves thrashing on stones and banks was more like a music depicted for a thriller scene going on in movie.

Wandering among the roads and asking for Nomads came as a frequent approach we could take to reach our destination. No Signs, no maps and no concrete evidence of their presence if there could be in that region where we were heading. In between, one could see Indian Army being deployed in the remotest corner one could imagine and yes, they did help us out during our course. Our main focus was to look for shepherds and if you find them, you can track their families as well living as Nomads. After an hour search, we did finally saw some shepherds with their herds on high mountains and they finally gave us direction of reaching the Nomadic section situated on quite a height.

“Don't settle down and sit in one place. Move around, be nomadic, make each day a new horizon. You are still going to live a long time, Ron, and it would be a shame if you did not take the opportunity to revolutionize your life and move into an entirely new realm of experience.”— Into the Wild.

There were around 6-7 families gathered at a location where they had setup their camps and had enclosed sections made of stones to keep their stocks aside. As we reached during afternoon, we rarely saw any activity happening around. Just few Nomads with whom we had interaction. One of the family invited us inside their camps to offer us tea. It was made of butter extracted from milk from Sheeps and was not sweet but salty. At a height of 16,800 ft, it felt like a energy drink that kept our body warmed and functional. With nothing in their life to call as “assets”, their gesture of offering us tea & food made me think of how one can remain so generous when they have just basic amenities to take care of themselves at such extreme conditions. The lady who brought us in had two kids and one of them just 3 months old named as Rinchin. We offered them what we can in terms of chocolates, dates and soups which of-course could not take counter their unconditional gesture of allowing us in their tent. ​

“And I also know how important it is in life not necessarily to be strong but to feel strong. To measure yourself at least once. To find yourself at least once in the most ancient of human conditions. Facing the blind death stone alone, with nothing to help you but your hands and your own head”— Into the Wild.

When the sun was about to set, tremendous activity started to happen. As we were surrounded by mountains, one could see herd of sheep coming from all directions in a large number. Each family owned 700 approx sheeps and imagine more than 4000 of them coming from all directions at your location. Simply unbeliveble. One family owned 80 yaks which looked more like giants running around. And each family had their own mountain dogs known as “watch dogs” which tend to be more related to wolves than a pet. They helped them to track any missing sheep and made sure to bring them back to their home. They more remember a pack working together to help the nomads survive. Whosoever we met during our stay, were always smiling and greeting us on our way of exploration. Freed from materialistic life and clutter from society, these people definitley have achieved a sense of spiritual self or “Moksha”. One could see kids running around and playing & dancing, men & women taking care of their stocks. As I was curious of surrounded by the sheep, I asked one owner if I could enter the enclosement of sheep and see them closely.

The moment I entered their enclosement, I could feel their warmth as instead of running around, they seemed calmed and not frightened from a stranger in their home. Few of them started following me and were more interested in getting a pet on their back. The shepherd told us that these were “Pashmina” sheep and goats from whom all the famous Pashmina shawls are made. Later on, he also gave us a piece of pashmina wool as a goodwill gesture.

​When the night came, being situated near snow covered peaks, it turned more windy and chilly keeping us awake whole night. I developed a severe headache due to cold and windy weather. Our tents was adding more to the situation by not staying stable all night. The growling of dogs around and yaks being showing their powerful stature using heavy sounds, added more to the situation. Amidst all of this, we thought how being with nature can be less of “fun” and more of meeting the reality & wilderness of it. Thinking of overcoming the power & strength of nature is very well taken care by its forces around if they are not beingg respected. After surviving the growlious night, in the morning after meeting few more nomads, we packed our tents and drove towards Leh. The time spent with these people and their unconditional love & gesture had made us to restructure our lives & thought process.