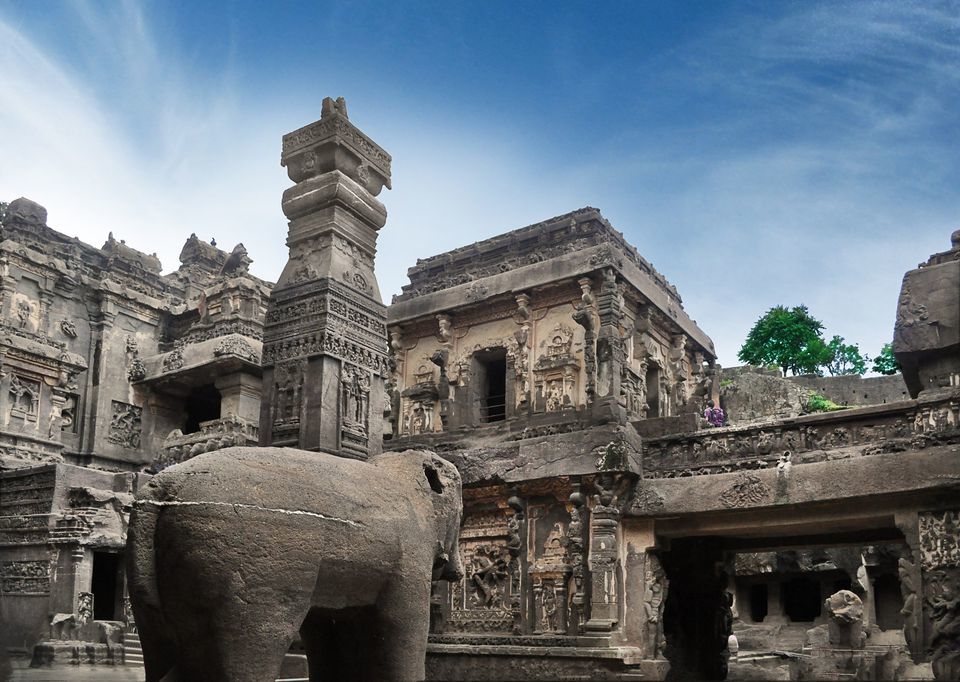 Our Indian heritage & culture has a lot to offer to every person, and today, you and I will rendezvous the Under-appreciated gems: The Ajanta & Ellora Caves. It was included in UNESCO world heritage site in 1983, situated in the state of Maharashtra. You can get all the historical and technical information on these caves in the ASI website for the most authentic source.

These are manually excavated caves, started around 2nd century BCE and was completed around 480 CE and still, it doesn't fail to charm you with its marvellous oozing stories. There are 30 rock-cut caves. Though few caves remained unfinished it still somehow awe you as if someone magically blessed the place. Yes, it's that's pretty.

Other than caves, the place will offer you prodigious paintings which survived more than 2000 years and the beauty is still intact. For art lovers, this place is no less than a little heaven.

I was staying in MTDC hotel in Jalgaon as from here Ajanta Caves were nearer. The hotel manager told me to get as early as possible because the later you reach the more it will be crowded; as suggested I started early in the morning so that I could enjoy the place peacefully. It was around 56 km from my hotel, so it took me just one and a half hours to reach. Once I arrived, I had to park my private car and had to take the shuttle bus service to reach the cave site. (You must be thinking it is not fair, but this initiative had been taken to protect the heritage site.) From here I took my entry ticket and trekked about 10 min and Eureka, I can see the gigantic horse-shoe shaped rocks excavated into caves and on the other side, a narrow river (Waghora) was flowing down. I was literally awestruck to see such an enormous cave which were done about 2000 years ago when no engineering machines were available. It was all done with manual effort.

Here in Ajanta, all the caves illustrate the Buddhist culture. The famous among all the caves is cave no. 1, so I started with this cave. This cave is famous for its heavy painting and all these are well preserved. Among all the paintings, Bodhisattva Padmapani painting is the eyecatcher. This painting is the face of Ajanta caves. Seeing the Padmapani painting, I froze for a few secs, as no words can do justice to this amazing artwork. All the colours and details were fine enough to keep me agape. All the paintings on the walls of the caves have Jataka tales which tell the stories about Bodhisattvas. Even the ceilings of the cave were also painted. The caves are very dark but not to worry, guides to the rescue. They carry pre-approved torches with them. Going further, caves 2, 16 and 17 also illustrate the ancient wall-paintings which are similar to the painting of cave one. Among all the caves, cave no. 10 was the earliest which is a chaitya (prayer hall). I could feel the positive energy standing inside the hall. The finished caves did awe me but even the unfinished caves startled me.

As my guide continued telling me about the stories of the caves, I could feel a time travel to that period, as if everything is happening in front of my eyes. I would suggest every person to see this astonishing caves once in their life especially Indians.

P.S I will restrict myself only to Kailash Temple.

It dates back in 600 - 1000 CE period. These caves are divided into 3 parts, the Buddhist monuments, the Hindu monuments and the Jain monuments. There are more than 100 caves at the site, all excavated from the basalt cliff of Charanandri hills, 34 of which are open to tourist. And among all these, the Kailash Temple (cave no. 16) is the face of Ellora caves. It's also the largest monolithic rock excavation in the world.

After visiting Ajanta, I went to Aurangabad, as Ellora caves were closer to here (29.7 km). It was almost dawn when I started the journey towards Ellora caves. It was just 40 min later, I could see the Kailash Temple glowing as the sun rays fall directly on the shiny rocks. The cab driver told me to get down but I kept staring at the Kailash Temple mesmerizingly from the cab window. Took my entry pass and a guide. As I entered the cave 16 i.e Kailash Temple, she started to recite the story behind such an enormous carving. She told me that it was excavated upside down and the whole thing was carved out of one single stone; she continued with the story but my mind was occupied with the preciseness of the craftsmen. It was carved into a chariot and on the top lies the Shiv Mandir (Shiv Temple).

As I entered the main courtyard there is the idol of Nandi bull, in front of the Shiva lingam. The courtyard is u-shaped and not a single corner of the place was left uncarved. All the Hindu mythological characters were sculpted on the side panels and on one side the whole Hindu epic 'Ramayana' was being illustrated. I spend a good two hours at the ground floor of Kailash temple and finally went on to the first-floor. There I saw some other brilliant idol of Ravana, lifting the mount Kailash, with goddess Parvati and Lord Shiva seated on a throne. There are many other surprising elements which you need to see for yourself.

Five hours of amusement finally ended with good food while returning back to Aurangabad. On the way back you can also visit Bibi Ka Maqbara (Taj Mahal of the south), Daulatabad Fort.

You can buy the Ajanta and Ellora caves tourist guidebook .