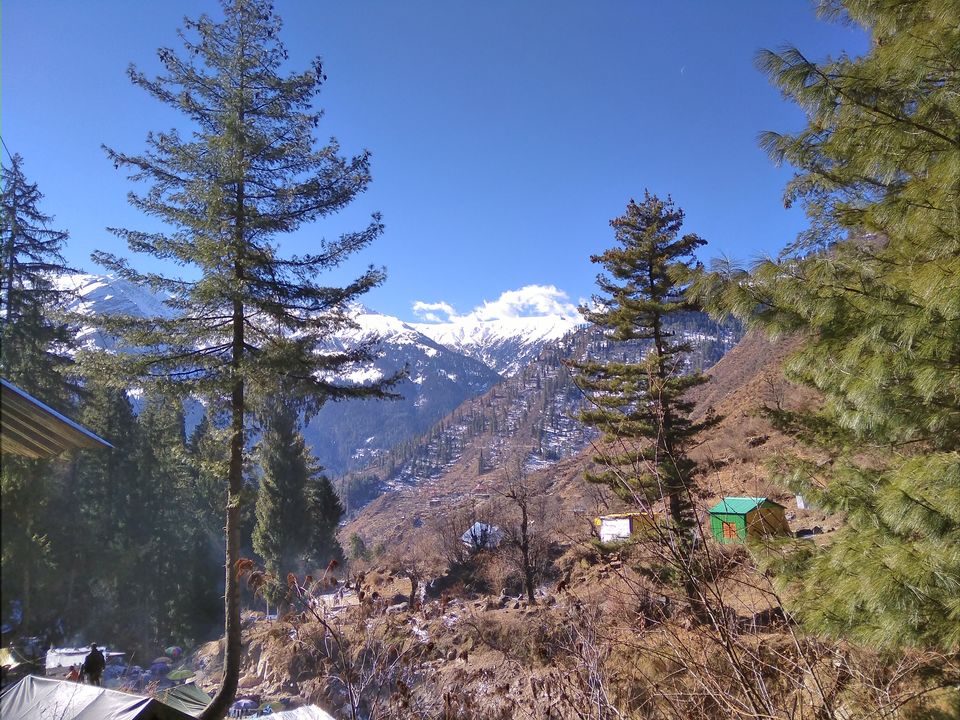 It was 5 a.m. It was the coldest I weather I had ever witnessed. I was curled up in a blanket. Damn my athletic time table, my body now won’t let me sleep anymore. I had to get up. I went outside, the view sent a chilled feeling through my spine. It was like realising my best dreams, I was finally doing what I had dreamt of, I am travelling on my own terms.

I tried to wake everybody up, we had planned today to visit the waterfall nearby and then head back to Manali. Now, the biggest reason why I was travelling solo was compatibility. And here I was, holding myself back because few other people accompanying me were too lazy to get up and get ready as quick as possible. I could have gone alone, but we had accompanied each other so far, and I didn’t wanna part so rudely.

We headed out for waterfall at around 9 a.m. While others left their luggage in the room, I took my only luggage, the sling back which I had brought from Shuru with me. I was thinking of walking to Manikaran on foot, and I knew others wouldn’t follow me on this. I wanted to do what I had come for, make the mountains remember me. Taking a cab would be an easy option, and I would pass this heaven too quick to completely observe its beauties.

Further ahead there was no road, we had to walk on “Kuttcha” road. We reached a small waterfall still 2 kms from the main waterfall. I knew this because there clearly was a signboard saying “Waterfall- 2 kms ahead”, but others didn’t wanna go ahead. I said to myself “Next time baby” and headed out for the next adventure awaiting me, a 17 kms walk in the mountains, while others sat in a café eating. I knew they would catch up with me sooner or later, but I said my goodbyes.

Now, as wonderful as solo trips sound, I’ve come to know that it’s not that common. I didn’t find a single person not surprised on learning that I was on a solo trip. I met a similar person en route to Manikaran. He was from Bangalore and when I told him I was alone he was shocked. He asked me, “Do you smoke? Drink?” I was like “No dude! I don’t drink, Neither do I smoke, cigarettes or weed or anything else”. Then he said the weirdest thing ever, “THEN WHY ARE YOU EVEN HERE?” I didn’t know whether to laugh on that or not. In short places like Kasol and Tosh are haven for, you know, rejuvenators!!

That 17 Kms walk from Tosh to Manikaran would be counted among the top ten best decision I made in my life. Finally I had realised my dream. The trip was going exactly as I had planned, even better, and that’s saying something. I did meet my companions towards the end and we headed for Manali in the same bus.

It was the 31st and I was living the dream. What more could one ask for. I am an Introvert, an extreme one, so I had no party planned in my mind. I slept at around 12:30 a.m. happiest I had ever been.

Now I can proudly say, and had said the same for 2017, “This was the best freaking year of my life”.