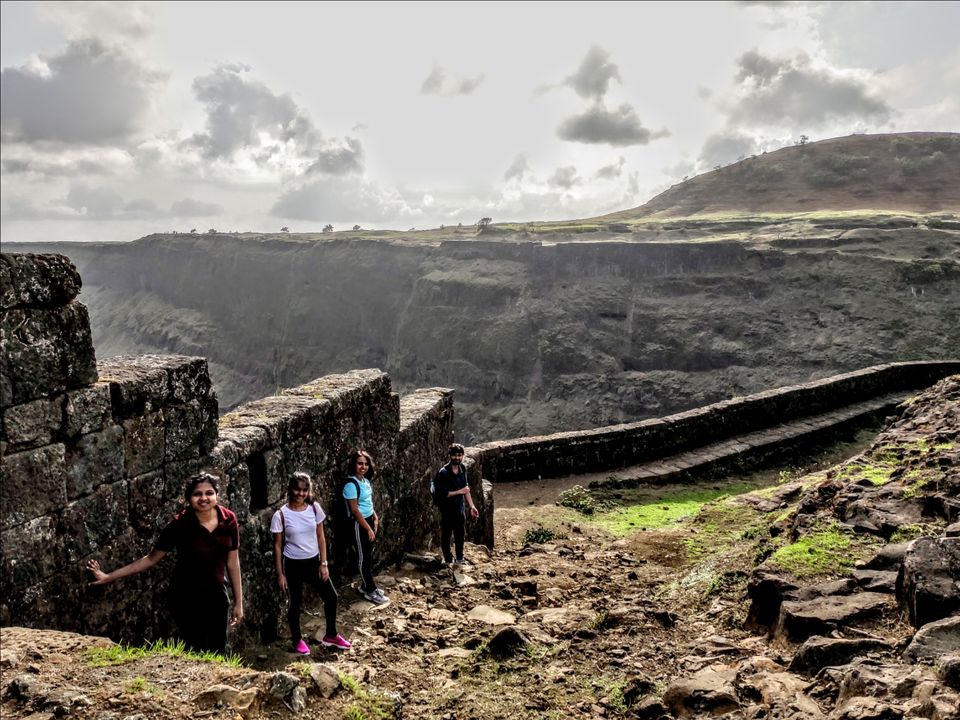 If you're visiting Mumbai on a monsoon weekend, what is that one thing you would not miss doing? I may have missed marine drive, but the western ghats made up for it. The view from atop he visapur fort on an overcast afternoon is all I needed to make the gruelling week worth it. The Visapur fort trek is one of the perfect one day getaways from Mumbai, it also lies very close to Lonavla. Five of us set off from Pune/ Mumbai for Lonavla, our end goal being the summit of the lesser known Visapur fort not far from Lohagad fort.

After an eventful 3 hours on the road along the picturesque and tunnel strewn Mumbai Pune expressway, we stopped for stocking up on food and energy drinks at the "highway mall" enroute. We reached the base for the trek after following directions from locals and a super helpful blog post we were following. Our car wouldn't go up the steep winding roads on the hills, so we got off and started walking to reach the base. We were lucky to find a shuttle tempo service on our way up, which dropped us to our destination in lieu of some nominal payment. The shuttle runs mainly for Lohgad fort, which to me seemed like a more commercial version of the Visapur fort.

On the way from Lonavla to Malavli, take a left once you reach Viraj farms. A little way onward you should see a sign for 'Visapur'. Follow the muddy trail to reach a small family run Maggi stall right at the base of the trek. We made plans of stopping there during our descent, but started our ascent right away. It was already noon.

There are three trekking routes to reach the fortress. The trail we'd chosen was easier among the one day itinerary treks I've done so far and took us around an hour. The ascent was on rocky, uneven stairs. Now and then we would stop to enjoy views of the valley below.

The views from the top are absolutely mesmerizing, you can see parts of the Lonavla valley on one side, the Lohagad fort peak on another and the Pawna lake is also visible. The cherry on top was light drizzle and the heavy monsoon clouds above us. The fort covers a large area, so you need a good couple of hours or more to cover 70% of the area when at the top. We went up a small hillock at the top to get a 360 degree view of the scenery around us. The winds were crazy, and we just walked and lazed around enjoying the peace for about 3 hours before descending.

We had a hearty chai and Maggi meal at the shack at the base, followed by some exploration of a deserted property across the road. The views of the hills were mesmerizing even from here. We had an appetising dinner on our way back at Baithak Dhaba in Lonavla (recommended for ambience as well as taste of food), and were back in our respective beds by 10pm.

P. S. During peak monsoons there is a waterfall trail for this trek which one should definitely try out if they're up for the adrenaline.

Starting point of the walk to the base 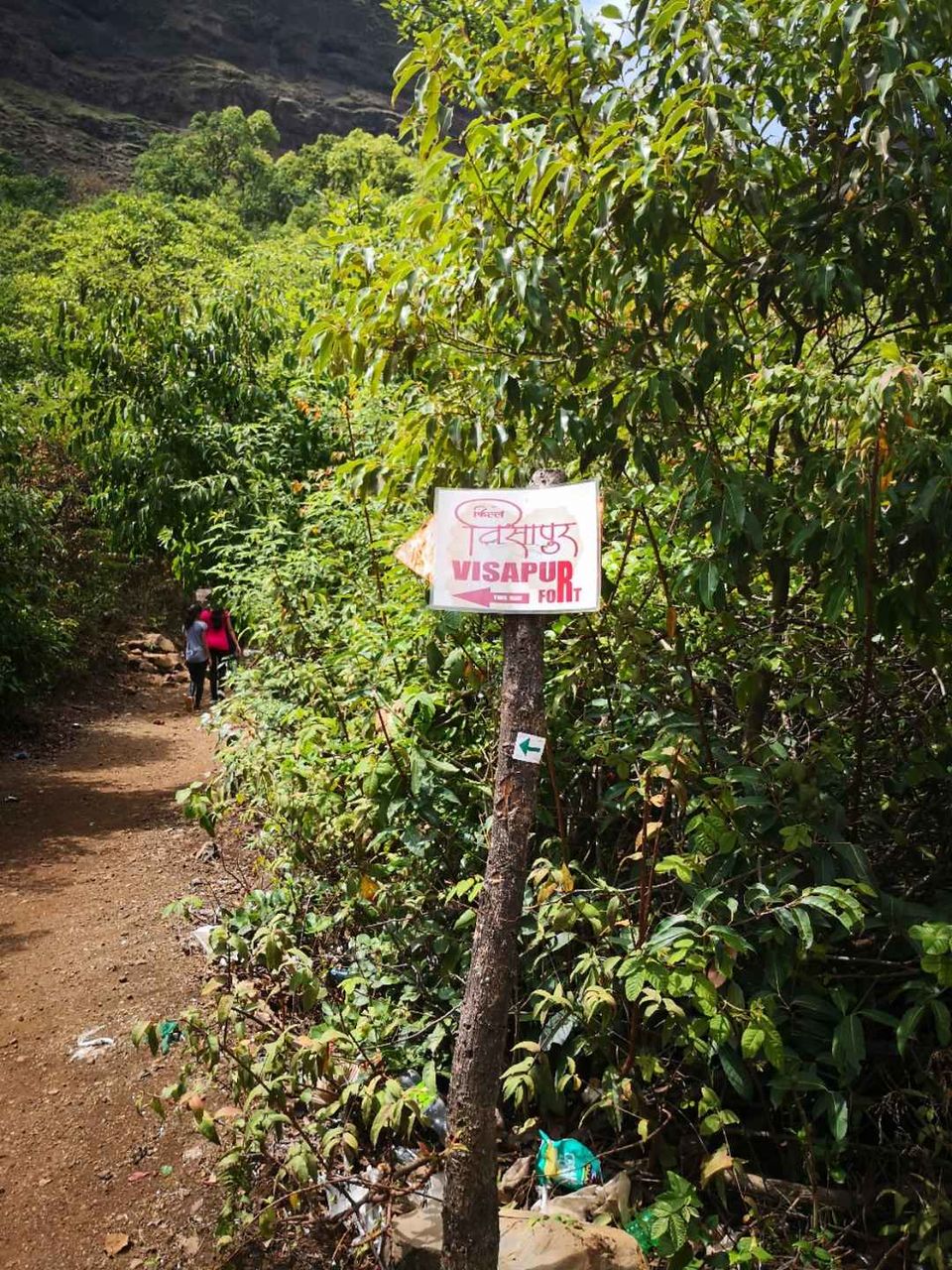 View of the peak from an abandoned property nearby 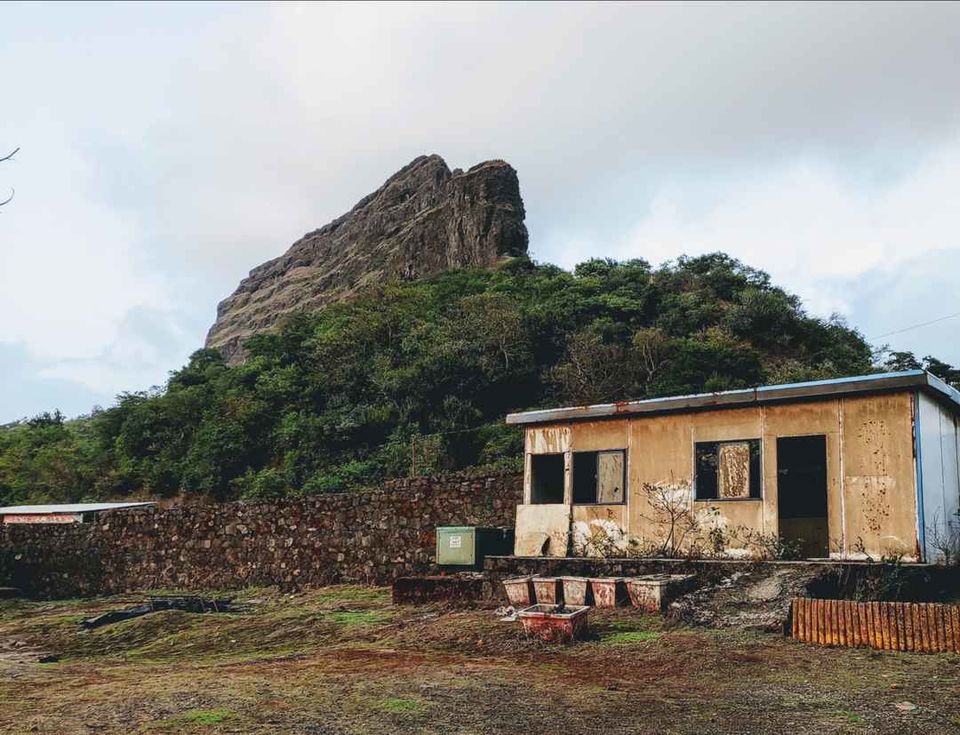 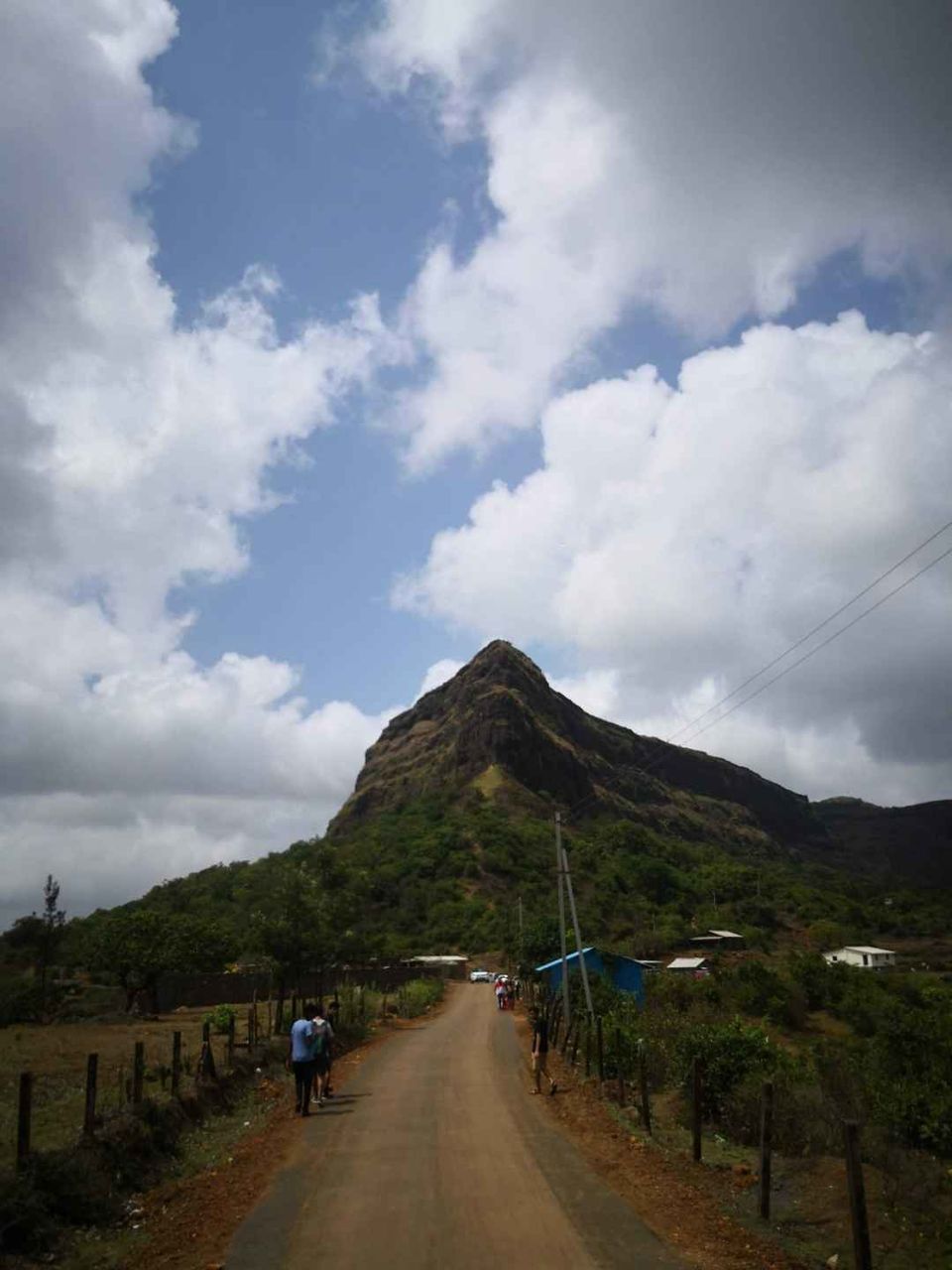 Short walk on muddy trails till the base from the road 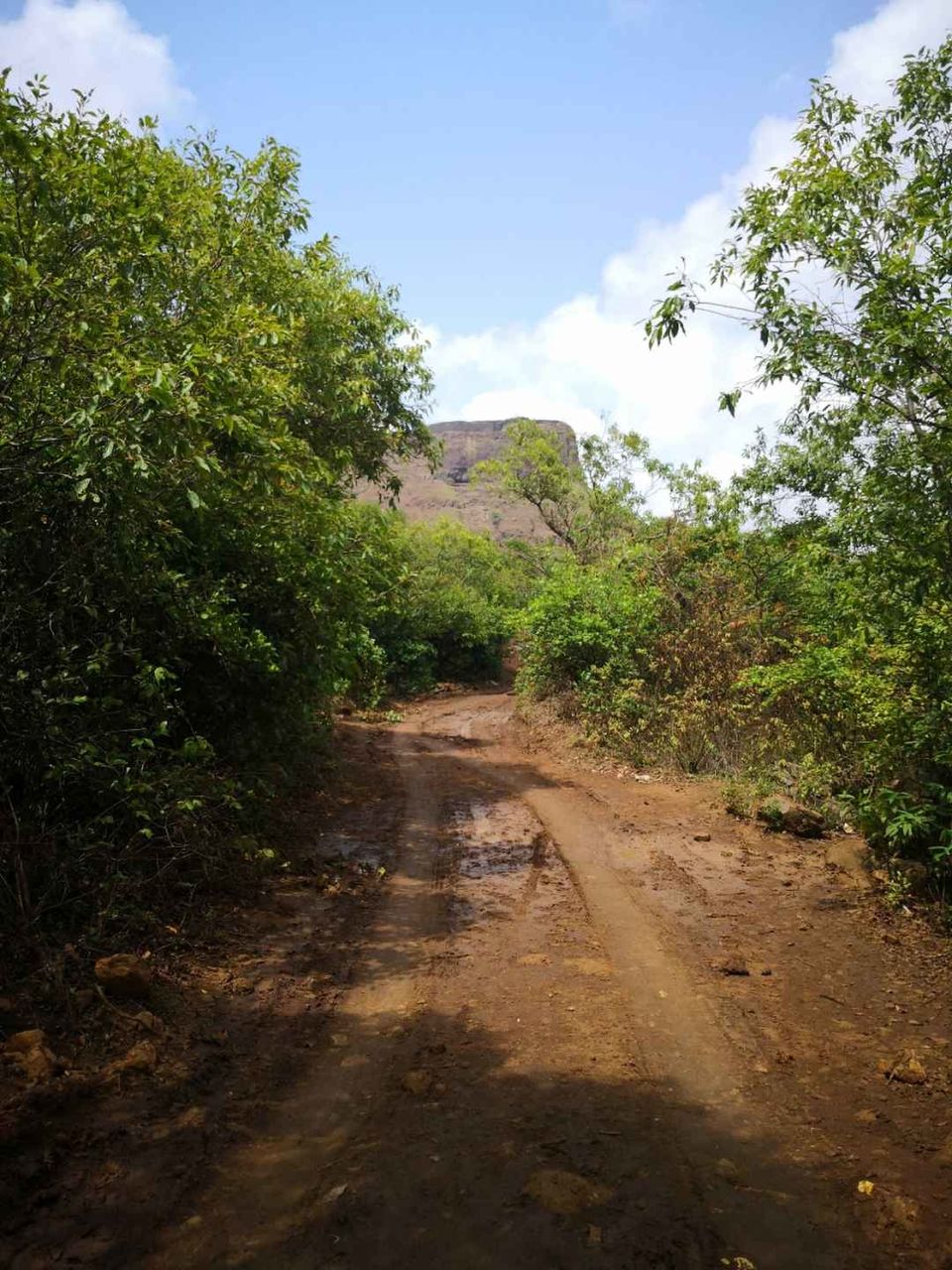 View of the valleys during the ascent 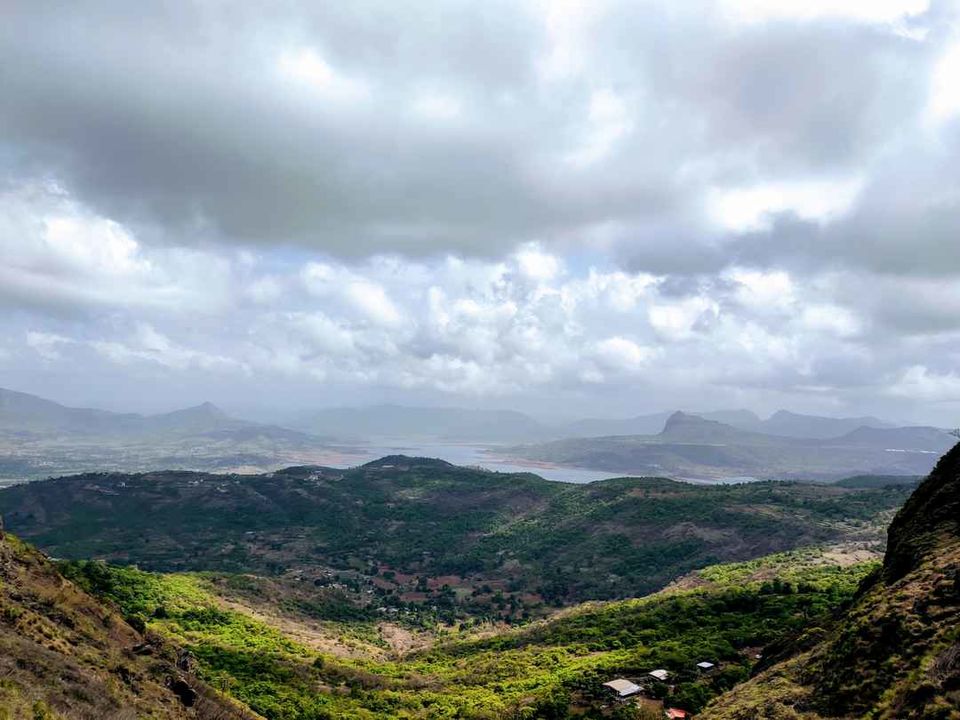 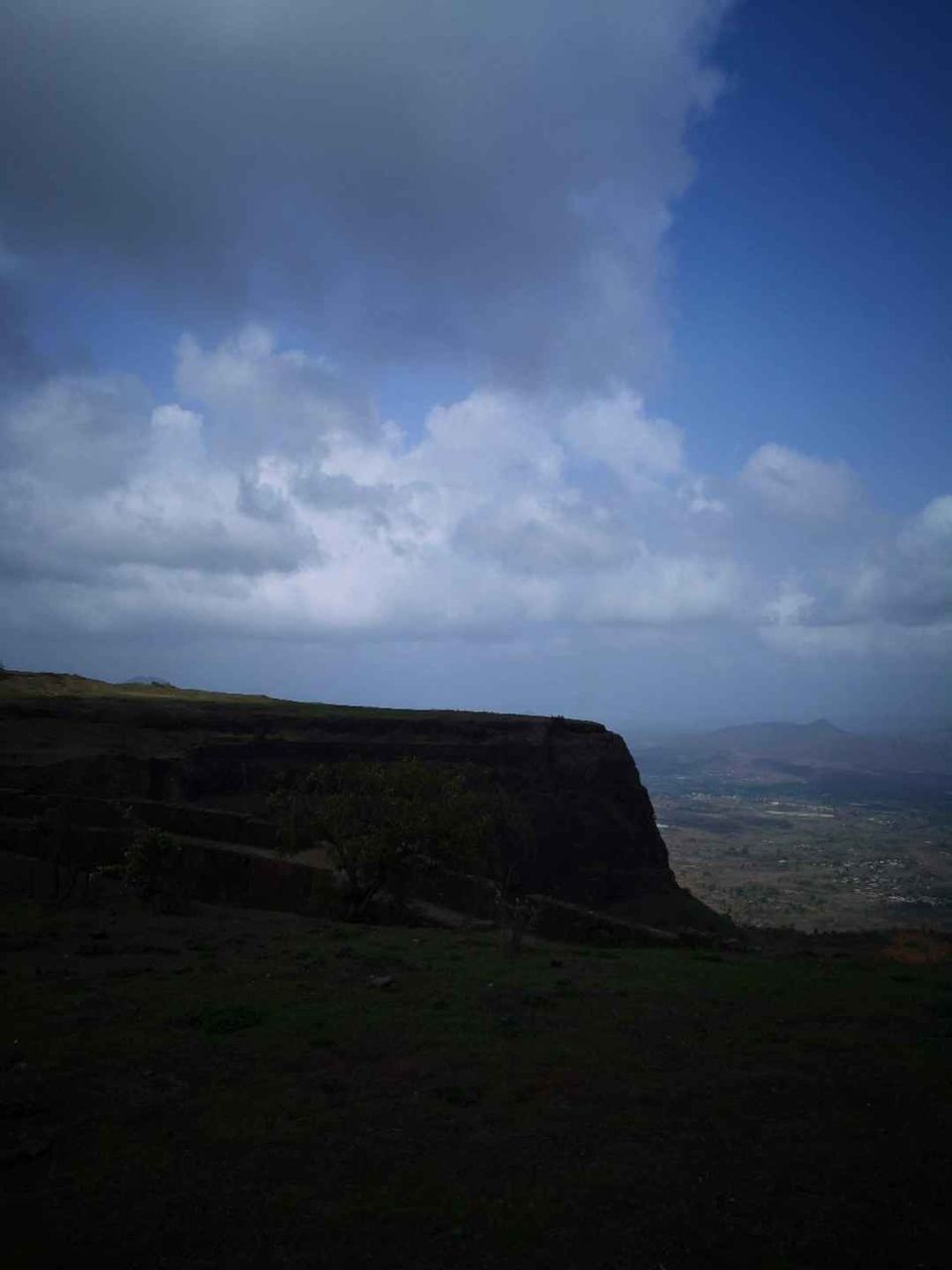 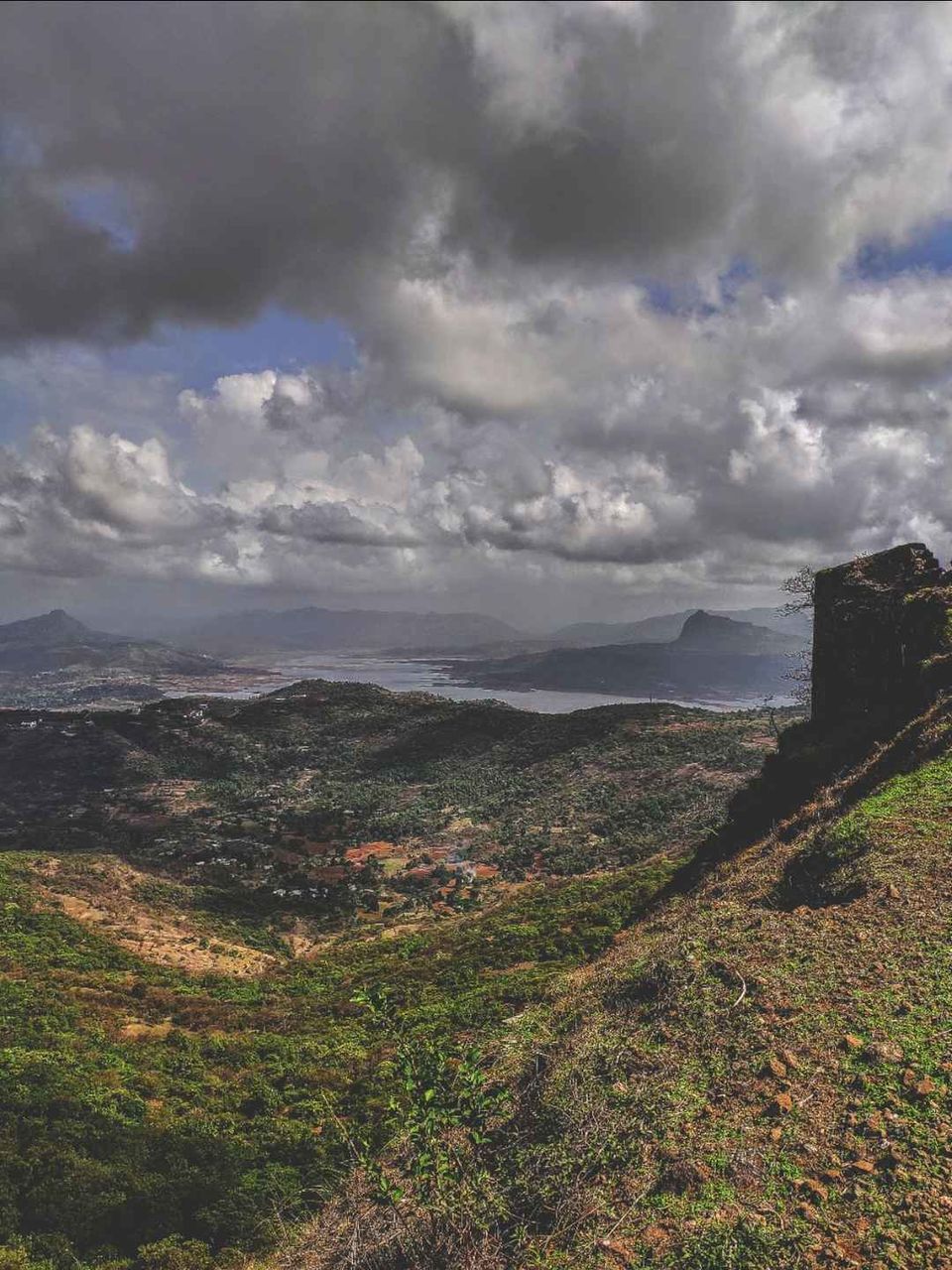 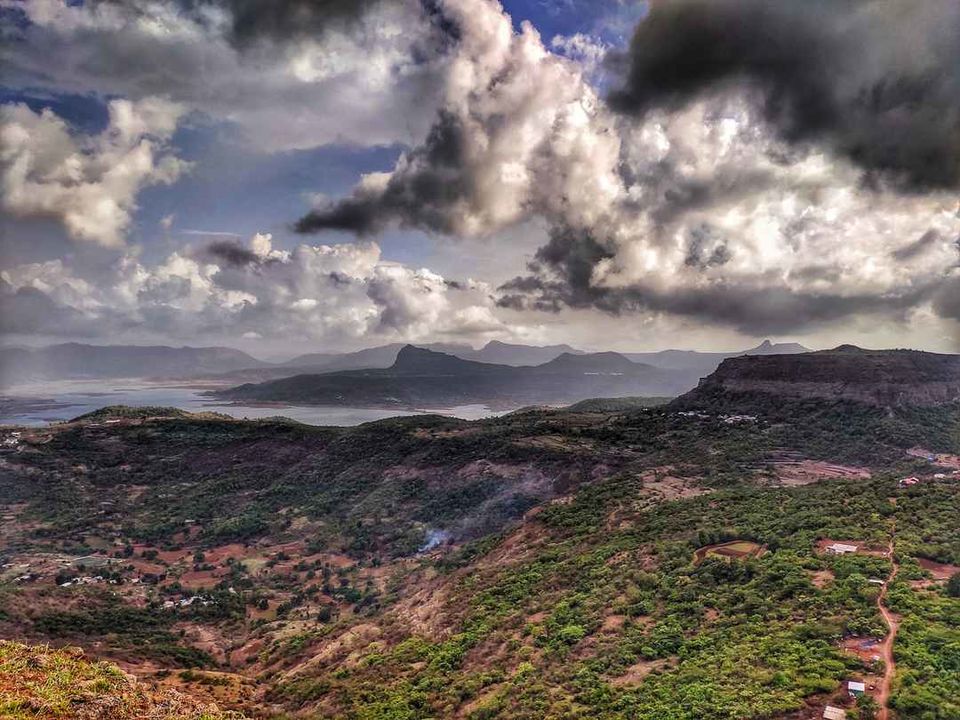 Another edge of the peak 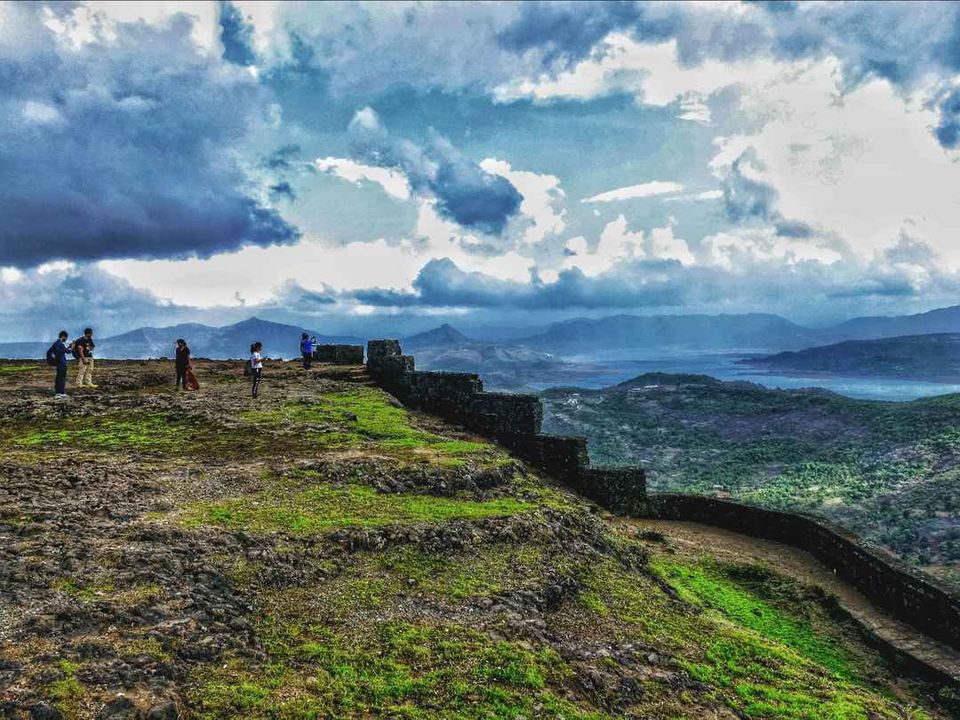 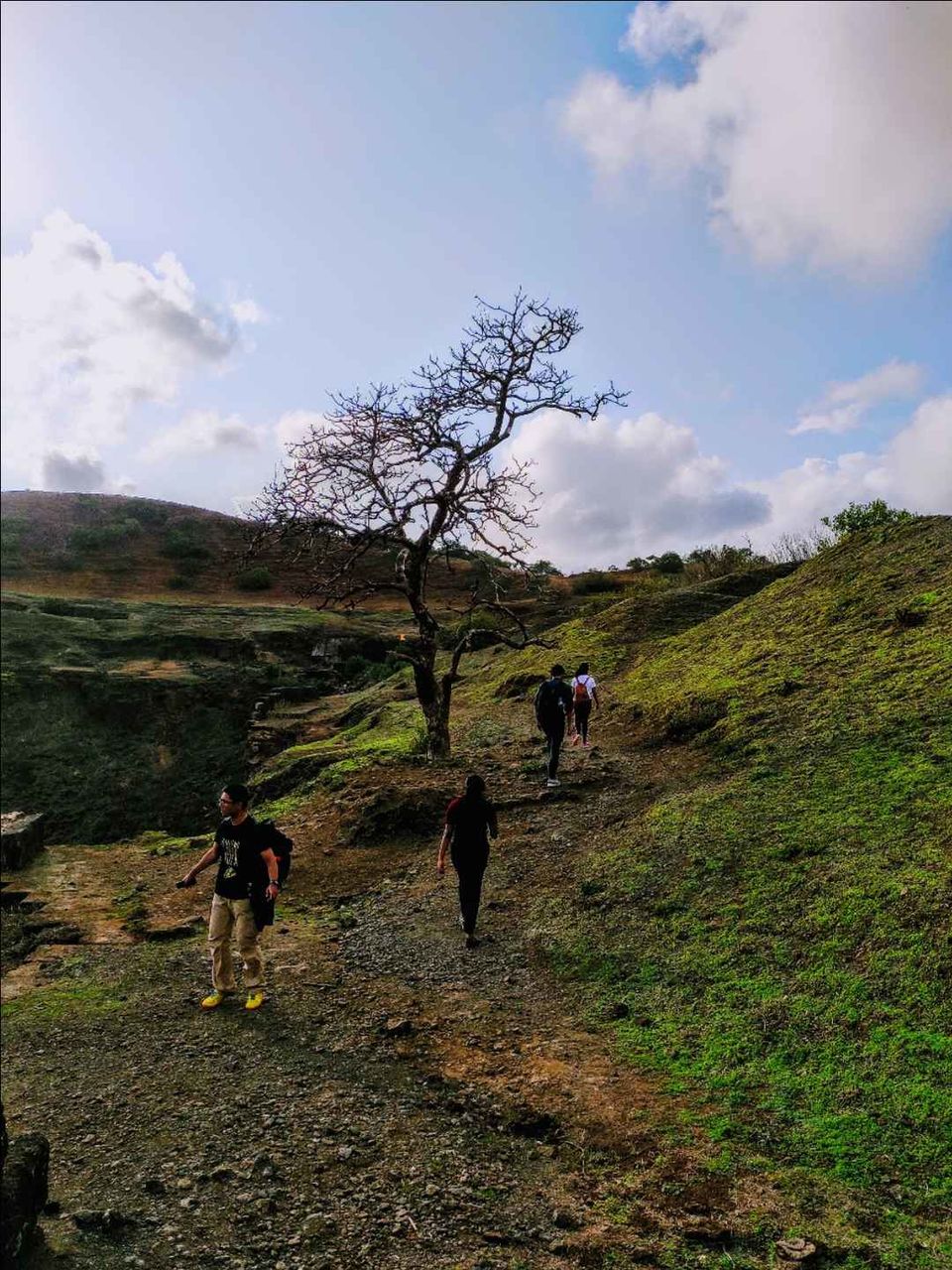 The shack at the base 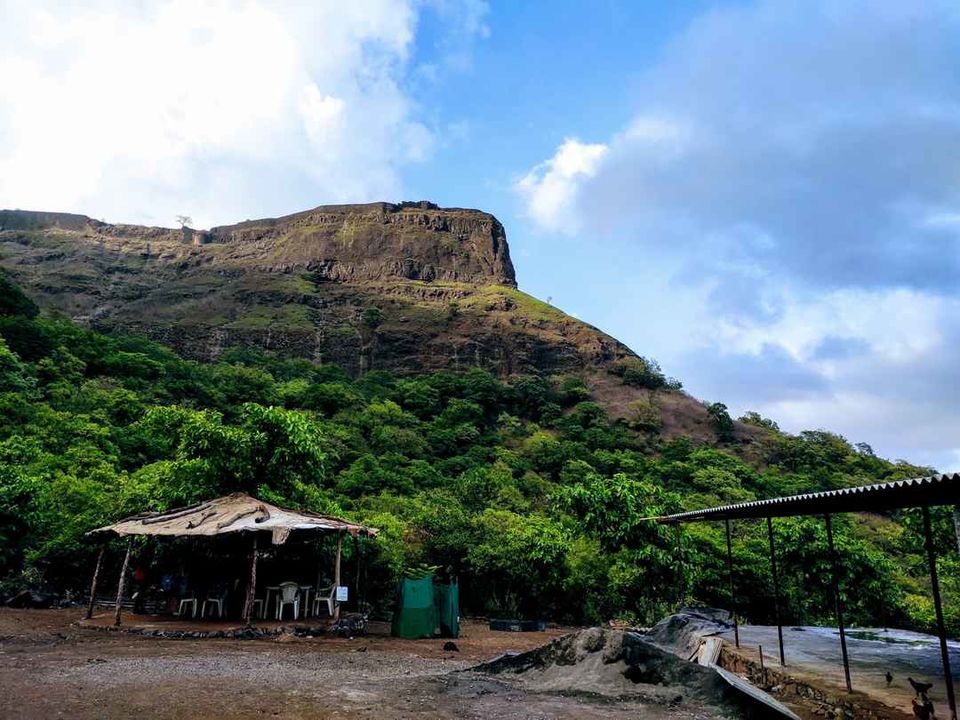 Can you get enough of these views? 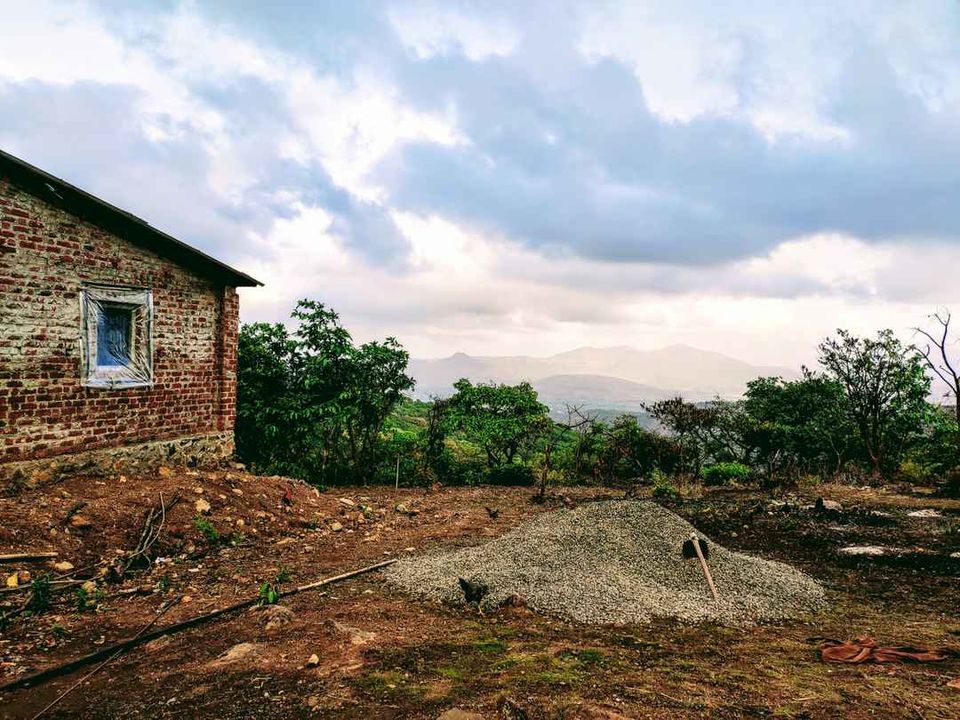