Munnar Travel GuideMunnar TripsSailors On A Day Out. Camping In Munnar

Sailors On A Day Out. Camping In Munnar 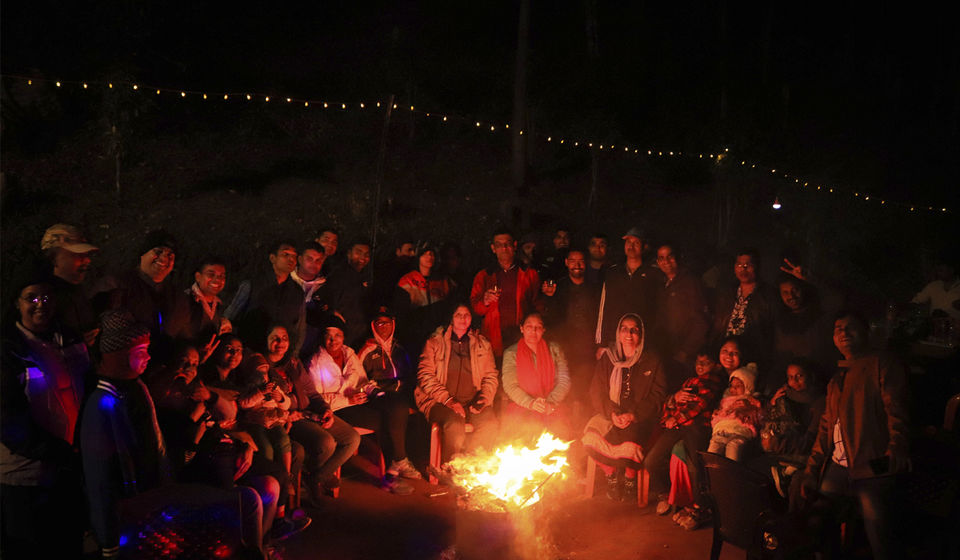 "Sir, a team from Indian Navy would like to do camping in Munnar with us. You could take care of that, right?" asked Aani. And that's how his day started.

Being the head of ops team at Campper, camping requirements like this is nothing new for Chithran. But this one is different. He's gonna host the Indian Navy! Chithran was so thrilled but didn't express it. He settled down at his desk and dialled for Mr Victor, who made the enquiry.

Victor was much friendlier than Chithran expected. He is a Commander at Indian Navy. He has to take his team for a two-day outing. Some of his senior officers suggested camping in Munnar.

A group of 19 officers & their families, which makes a pax of 44 people. Chithran suggested Camp Woody at Suryanelli, 30km from Munnar. That's the best place for camping in Munnar for such a large group. Victor needed a nod from his team. Chithran said he will wait for the confirmation call, but deep inside, he was confident of this thing happening.

At about 5 that evening, Chithran got the call he was waiting for. There was a smile on his face.'It' s time for Munnar'

Chithran arrived at Camp Woody a day before the camping. Usually, the ops team doesn't go directly to the camp for the operations. But when a larger group comes, someone from the ops team has to be there at the camp. Chithran ensured things are perfect and intact before the team arrives. Next day morning, he got the call from Victor, saying they are at Munnar. Still, Chithran has got plenty of time. They will be doing some sightseeing at Munnar before heading to Suryanelli. By 3.30pm, the team bus reached Suryanelli. Chithran was there to welcome them, with his captivating warm smile. 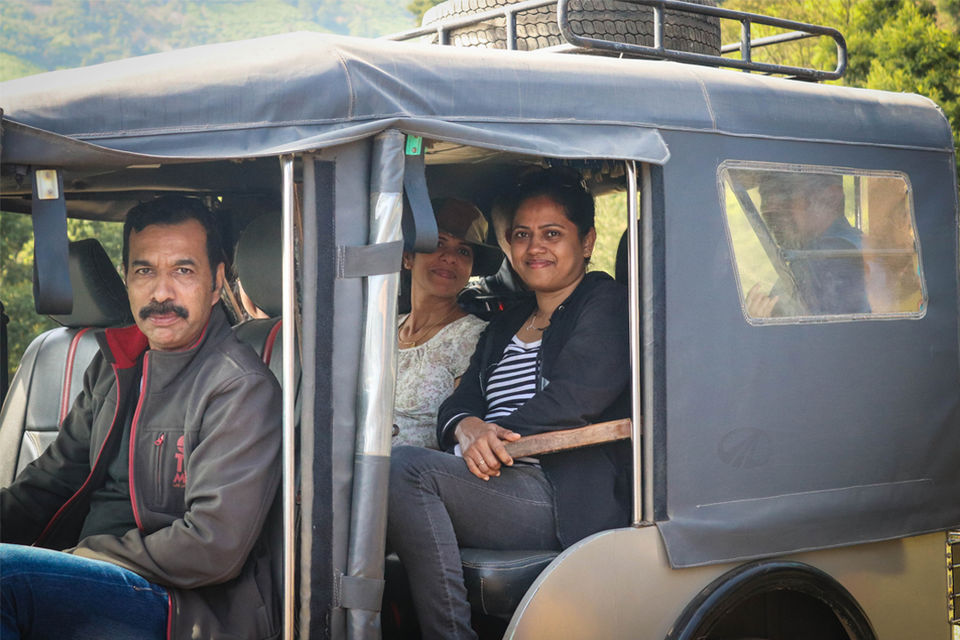 The team of 55 members were taken to the camp on three Jeeps, two trips each. Dharman chettan, the camp caretaker, was busy welcoming all with his steaming hot black coffee. Chithran came with the last team and allocated the team into there tents. By around 6pm, Chithran called everyone to the cliff. The bright red circle was settling down at western hemisphere. It was foggy, but that was one of beautiful sunset Chithran had seen in recent times. People really loved it. Chithran knew it from their expressions.

'This is just a start' Chithran thought.

By this time, Dharman chettan finished setting up the campfire.

Kids having a great time at Camp Woody 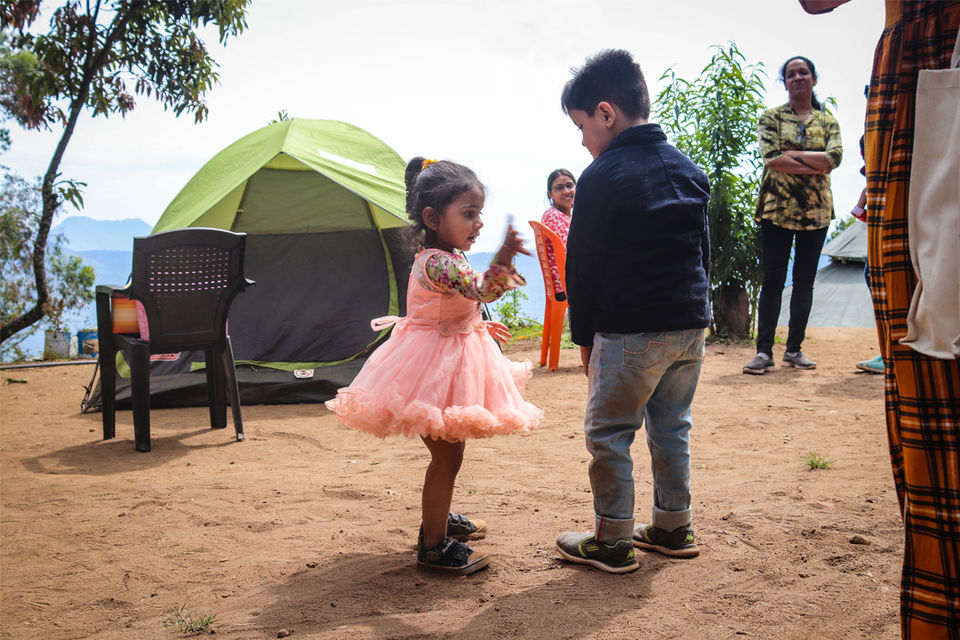 CAMPFIRES TO HOLD ON TO

A must experience thing while camping in Munnar is the campfire. Cradling down with our loved ones and warming up against the chilling temperatures are some of the goodness of camping. Some campers tend to be in peace at the campfire, but these lads have no intention of that.

Singing, dancing and shouting, the Navy team enjoyed every single second of the campfire. The cold winds warmed up their spirits, while the bonfire warmed up their body. By 8.30pm, Dharman chettan announced the dinner is ready.

One big happy family ❤ All the way from Southern Naval Command, Kochi 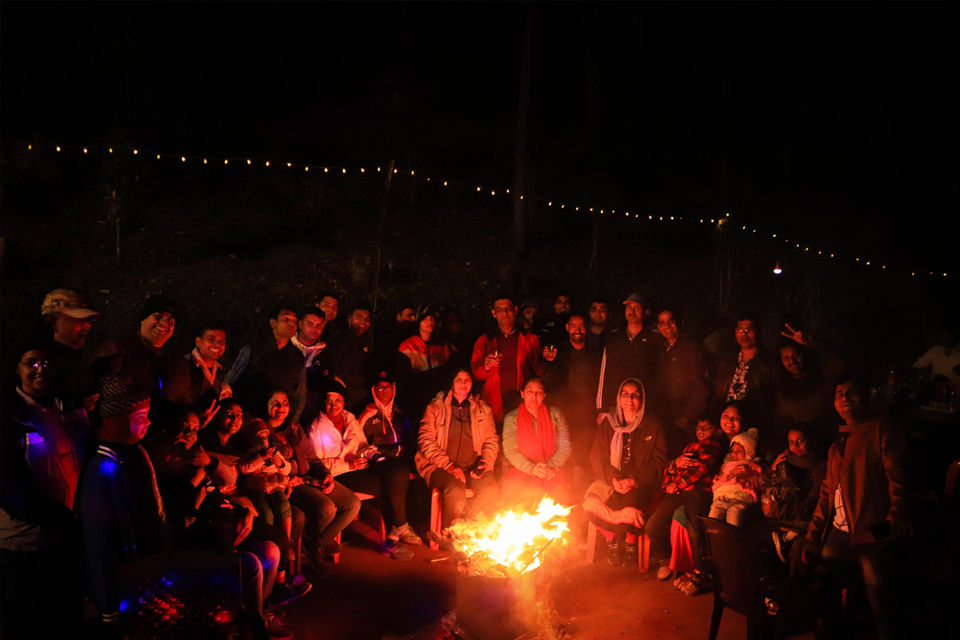 The dinner was delicious, 'as usual'.

When it comes to cooking, Dharman chettan knowns what's best for the campers. The menu will be the same. But how it tastes depends on the campers. Whether they are from the north or south India, whether they are old or young, single or couple, or maybe a family with kids, all these aspects matter for him. But at last, everyone loves his food.

Some couples were still at the campfire. Spending some time with their love in peace. Chithran thought of calling them for the dinner but changed his mind.

After dinner, Chithran insisted them to catch some sleep early, as they have to start their next day by 4am.

"Your Jeeps for Kolukkumalai trek will be here by 4.15am. So it's better to get some sleep early."

But the kids were interested in stargazing from the cliff, and the men headed out to have some drinks.

"Well, this is their day off. And let it be their way. Besides, we can only ask them to do things, right" Dharman chettan told Chithran back at the kitchen.

The starting at 4.15am changed to 4.30am. Still, Chithran was impressed. He didn't expect to start the trek by at least 5am. The men were awake till 12 yesterday, still, they managed to wake up by 4am. The kids stayed back and some ladies in the group too. But rest of the team was ready for the Kolukkumalai trek.

Kolukkumalai Jeep trek was a great experience. They realised waking up at 4 was for something really worthy. Atop Kolukkumalai, it was foggy. Still, the orange tune of the eastern sky was promising. Above those tangerine mountains, kissed to their heady blush by the warm rays, the giant red ball raised. The group of mere silhouettes began to radiate all the colours they are born with, as the rays, strong and bright, lit the hills past the mist. Kolukkumalai sunrise trek has always been an inevitable part of camping in Munnar. Heading back to the camp was difficult. The sight was to live, not leave.

Back at Camp Woody, breakfast was ready. The team has asked for some activities near the camp. Chithran already has plans for that. 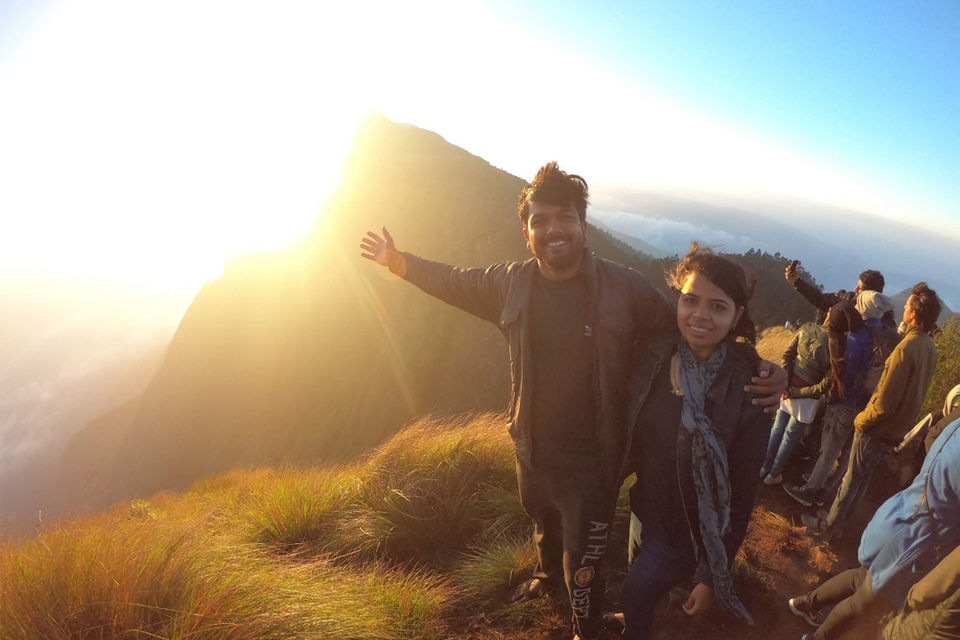 The kayaking and zip-line activities at Harrison Malayalam tea estate are meant for those adventure freaks. And now, Chithran has got the best team for these activities. Kayaking was the hit menu among the sailors. Almost all the officers tried kayaking. Zip-line was also busy by the back to back tries.

Pappathichola trekking followed the activities at Harrison Malayalam tea estate. While the guide took the Indian Navy team for the trek, Chithran stayed down. By around 11am, the team came back completing the Pappathichola trek. Chithran took the team back to Camp Woody. It's time to check-out. 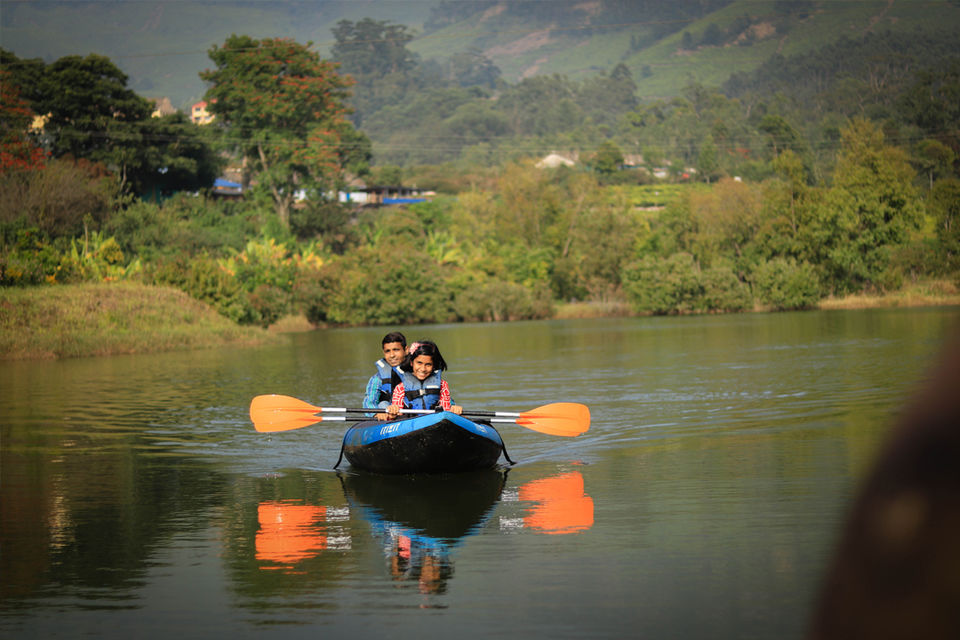 Dharman chettan served tea and snacks for the campers. While Chithran got some feedback from the team recorded. By 12pm, the team was ready to check-out. They hugged and greeted their hosts. Victor came in person and thanked Chithran for the stay. It was a great. Much beyond what they have expected. There were concerns for some families about the safety and privacy of staying in a tent, but Campper ensured and provided the best experience of camping in Munnar.

Chithran escorted the team to Suryanelli town and bid adieu to the team.

'And that was it' Chithran thought. There was a smile on his face. 'It's time for home.'