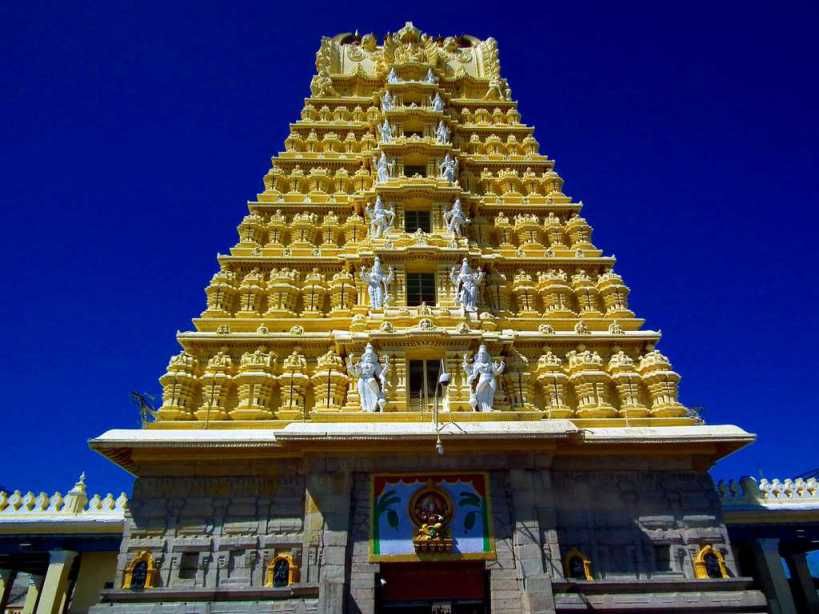 After the visit of Golconda's Mahakali, go now to get blessings of Chamunda Devi situated in Mysore state of Karnataka state. Located on the southern plateau at the height of seven hundred seventy meters in the west of Chamundi hill, between Mysore Kaveri and Kabini river. The city boasts both ancient civilization and modernity together in its own right. Mysore is known for its Chandan, Silk and its gardens. And for tourism, it boasts many attractions in itself. People from other countries come here to go around and here is what Dussehra says. But today we will run Chamundi hills.

Chamundi Hills is situated at a distance of thirteen kilometers from Mysore, on the top of this hill that is the temple of Mom Chamunda. This Durga temple built in the twelfth century is a symbol of the victory of Mother Goddess on Mahishasura monster. The height of this seven-storey temple is 40 meters and here is a large statue of Mahishasura. It has a very beautiful view of Mysore.

Nandy bull appeared in the road coming down from here. To tell about the vastness of my words, my words are falling short, it seems to me repeatedly how the creator should have created it. Looking at some of the big stones kept there, it is estimated that perhaps there will be such a large granite rock, on which the shape of Nandi has been lifted.