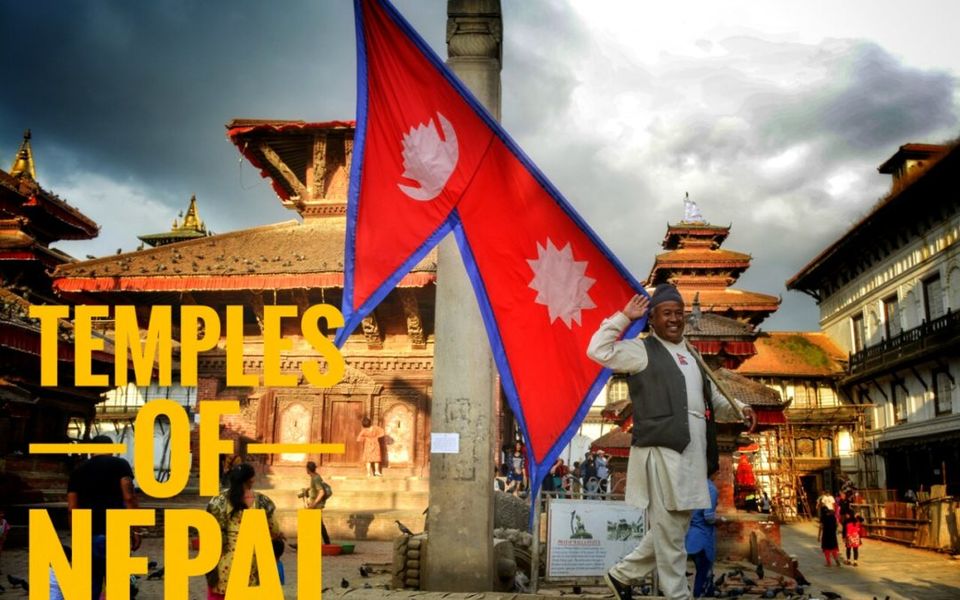 Nepal is a Hindu dominated country and it is quite visible in the architectural layout of the country. Each of the rulers built a temple to outdo his predecessor. This resulted in some magnificent places of worship dotting the landscape of Most of the palace complexes had a plethora of temples built into them where the kings offered prayers. These temples usually have a pagoda styled theme and many of them are prominent UNESCO Heritage sites. We go on a temple trail around Kathmandu discovering these magnificent beauties.

The first one of these temples that we visited is the Pashupatinath temple. A temple builds as the abode of Shiva, this gargantuan structure has been rebuilt after the earthquake of 1979. It is a UNESCO Heritage site since 1979 and the main temple is built in the typical pagoda style. Many ashrams have sprung up around the premises of the main temple and the exteriors are rife with Sadhus and Sadhvis. Although it is a riot of colours, be very careful while trying to photograph them. They will eventually rush to your side asking for money. A guided tour will take you around the temple premises and start off at the East Gate and end at the West Gate where a massive statue of Nandi Bull, a companion of Lord Shiva imposes a sense of grandeur upon you.

The main temple complex has two parts, an inner sanctum where the idol of Shiva is kept and the outer corridor where you can walk around. The interiors of the temple are done in plush colours of gold and lavish inlays on the walls will catch your eyes. The corridors are made of arches with intricate woodwork done of them. One of the things that caught our eyes was the gold-plated roofs of the main pagoda. The Prasad that is offered here is Rudraksha Malaas and these are prayer beads which are available in the shops outside.

The temple is located on the ghats of the Bagmati river and these ghats are used for Hindu ceremonial rites, especially burning of dead bodies according to Hindu custom. The ghats are dotted with a plethora of temples that have been built by various kings for their personal usage. The scene at the back of the main temple is very surrealistic with the rising smoke, processions of white-clad mourners and ash covered Sadhus making for a heady mix.

The next temple that we visited is attributed to Lord Vishnu. Although this temple is much smaller in size, but its fame comes from the effigy that resides in it, Budhanilkantha. Lord Vishnu has always been one of the charismatic of the Hindu Gods, which is displayed by being lying sideways in a relaxed position. But this one takes the prize because here lord Vishnu lies on his back on an eleven hooded serpent. The temple's main attraction lies in a pond right in its middle while other smaller idols surround it. Not only that, you can go down to the lower levels and see the reflection in the water below.

The Malla dynasty was spread across three main cities. These three cities included Kathmandu along with Patan and Bhaktapur. Each of the kings residing here built themselves a city square, also known as the Durbar Square. These are usually dotted with palaces and temples all around. Entry of these Durbar Square is usually through a ticket and it is imperative to bargain on the guide prices. It is better to be read about the whole history of the process and the temples. Then you can actually do the whole trip on your own.

One of the holiest of places in the whole of Nepal is the Kathmandu Durbar Square. Not only have many kings from earlier generations chosen this as their capital, even the coronation of Nepal's recent King Gyanendra Bir Bikram Shah has also happened here. Although there are many temples here, the Taleju temple built by Mahendra Malla in last 16 th century holds the prime spot. The temple is constructed in a typical Newari style and is elevated on platforms to form a pyramidal shape. Other temples include that of Jagannath, Kotilingeswara, Mahadev and Mahendreswara. But the one image that stuck with us through our trip was that of the Kalbhairav. This ten-foot high terrifying image of the God of destruction is usually the focal point of celebration during Durga Puja.

The Kathmandu Durbar Square also houses the Hanuman Dhoka Palace Complex which was the royal Nepalese residence till the middle of the 19 th century. Just like the others, there is a plethora of intricately carved woodwork and paneling on the exterior of the palace which has now been converted into the King Tribhuvan Memorial Museum and the Mahendra Museum.

The Durbar Square at Patan flourished under the reign of the Malla kings in the early 17th century. This red brick tiled pathway has imposing feats of Newari architecture on both sides. The Krishna temple is a massive temple which dominates the entry to Patan Durbar Square. The temple also houses a gigantic Bell which was used to communicate with the other two brother cities. The interesting part about this temple is the carvings of stories from Ramayana and Mahabharata.

As you move ahead you'll see a plethora of other temples. One of these also has the king on top of a statue bowing to the gods. A lot of these structures had undergone a fair amount of damage during the earthquake of 2015 and are since being restored. There is an immense number of pagoda styled temples which have small idols placed inside them, especially the Bhimsen temple. He is considered to be the god of prosperity and business.

The king's personal palace is a mix and match of stone, brick, and wood. The walls of the Palace are made with red bricks while intricately carved wooden pillars support it. The main palace square, Keshav Narayan Chowk also has a temple in the centre. It has now been converted into the Patan museum where you can see the intricacies that fashioned the face of Nepal.

The Bhaktapur Durbar Square is even more magnanimous. Not only are there temples for Badrinath, Jagannath, OmkarNath, Rameshwar and Hanuman there is even a nine storied temple and a Golden Gate which leads to the entrance of the palace. The doors of the Palace of fifty-five windows are adorned with some very intricate work on wood while statues of the king and the queen adorn the outside part of the palace. The palace walls have old murals with their paint peeling off while sculptures set in stone are built into the walls. There is a pathway of tunnels leading to an abandoned pond behind. But even this pales in front of the royal bath. Adorned with snakes at the head, borders and one rising in the centre, the royal bath totally gives you the shudders.

The nine-storied pagoda style Nyatapola temple lies on a step of stairs that fashion the lower four floors. The stairs of this temple are lined by animals in increasing complexity and are reminiscent of an era gone by. The small lanes of Bhaktapur are lined by shops selling pottery and the pride of Gurkhas, the Khukri. This sharp heavy edged knife has been the weapon of choice for the Nepalese and is still sanctioned in the Indian army. During the Kargil War of 1999, the Gurkha Regiment under the leadership of Colonel Lalit Rai nearly beheaded a whole platoon of Pakistani Pathans with this weapon. The Bhaktapur Durbar Square is also famous for its pottery and one of the older members of the community fashions out a pot for us spontaneously.

The interior parts of many of the temples are only open for Hindus. Shoes are not allowed within the temple premises so be very careful as not to offend sensibilities. There will be multiple people coming to sell you something but politely ignore and move on. Photography in the inner sanctum near the idol is strictly prohibited.

The temples of Nepal hold a mystical aura around them along with a deep insight into the rich history of Nepal. There is a seamless intermingling of the Buddhist and Hindu cultures in Nepal and these heritage sites provide you a tranquillity you wouldn't have experienced elsewhere.

Ever plan on visiting Antartica?