New Delhi Travel GuideNew Delhi TripsDiscover My Way To Rashtrapati Bhawan-Pity!! Why This Place Was Not On My Bucket List

Discover my way to Rashtrapati Bhawan-Pity!! why this place was not on my bucket list

I presumed that the most fascinated appeal about any photo walk is not only to capture hidden gems of any city which we are unable to access in our routine lives but also that chance of interaction with like minded new bees who share identical interest as you. An expansion of social circle along with advanced learning are always beneficial for one's self grooming. I've been to few photo walks earlier but the last one to the Rashtrapati Bhawan, Delhi (President's residence) was the most captivating, the name self represents the colossal frame of Delhi's as a capital city.

This photo walk was organised by FoD:Flavors of Delhi group on last Saturday where attendees had to gather at North Block of Raisina Hill as I've never been to the spot earlier so the idea would enough to tantalized my desire. I bring along Chiyu with me as nowadays kid is not getting chance to explore outdoors much because of summer vacations and peak scorching heat. One of the motivating prime fact was few of the participants were coming all the way from Chandigarh. Their peerless dedication is really inspiring.

Eventually, the organiser addressed the group of around 40-50 people and briefed us about efficacious detailed knowledge and significance of the blue hour concept in photography, moreover what should be the camera adjustment to get a picture perfect shot.

So what's the Blue Hour Concept? In easier term, this is a time window occurred twice a day (15-20 mins), an hour before sunrise and an hour after sunset (more precisely 40-45 mins) where sky reflects mesmerizing blue shade that adorns the beauty of image especially if you are going to arrest any monument's. Despite the fact, earlier to this piece of guidance I could contrast the quality of any image taken in the piercing sunshine vs. that to be taken in the mellow sun rays of dusk and dawn. As India's sky is to be considered as the most grimy and utmost polluted in the whole world that's why anyone can undoubtedly differentiate the clarity and colour tones in two normal pictures taken with any basic camera one in India and next one in any foreign country.

After stationing at the entrance we heard the announcement of our essentially required disbursement for the safety purpose and we continued our steps towards the entrance. And I initiated with capturing candid of the magnificent architecture of the residence of the leader of world's largest democracy and vast view of India gate through Rajpath.

Why this place attracts eyes from all over the world?

Till the time Chiyu snatched attention and interest of 4-5 fellow cameramen that made me relaxed as I could focus on my captures and concentrate on the camera's settings. However this calmness was not remained too long, I couldn't make out much time to get steady mesmerizing shots on tripod (specifically night photography) as my small kid was started throwing tantrums and I was wondering that how could she maintained such unhurried behaviour for such long. My gratitude to the organisers for choosing such enchanting venue otherwise I miss the chance to explore this place. 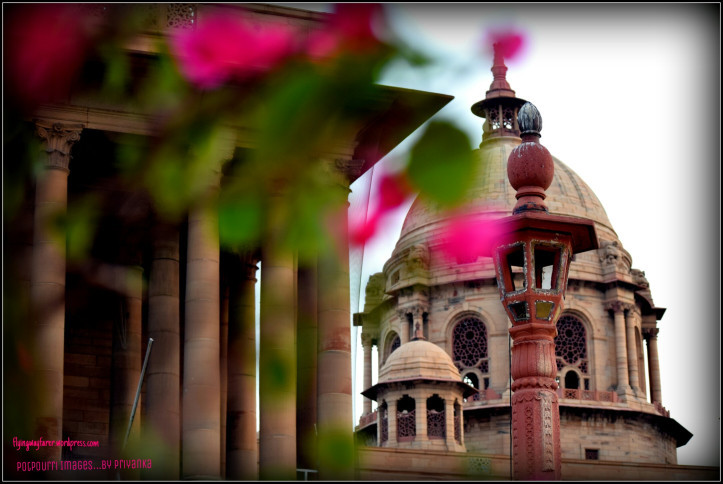