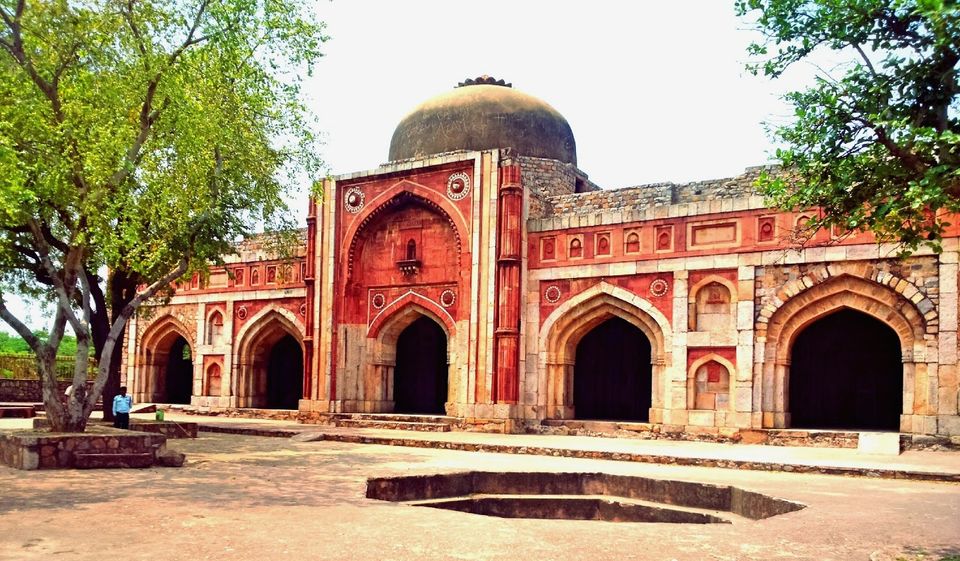 I heard about Mehrauli Archeological Park somewhere so took a trip to see it myself. It is pretty convinient to reach there via metro or bus. There is no board with name of the park as such, just a board of DDA, and that is your entrance to the park.
The Mehrauli Archeological Park is the home of several (approx 100) old monuments and tombs. The first one I came across was the Jamali Kamali Mosque and Tomb. The Jamali Kamali Mosque is somewhat similar to Qal’A-L-Kunha mosque located in Purana Qila.The mosque built in red stone with arched and crafted entrances and marble interiors is a beauty to behold. Little attention is paid to the maintenance of the mosque but looking at it gives you the idea how magnificent it would have been in its time.

Adjacent to the wall of the mosque is the entrance to Jamali Kamali Tomb. The tomb's gate is usually kept locked and I had to persuade the guard to open it.The tomb is a square flat roofed tomb, different from the usual tombs and is ornamented with colored tiles on the outside with Jamali and Kamali 's tomb lying next to each other inside. I couldn’t go inside where the tombs are as the gate was locked but I as I have heard it is yet another piece of mughal beauty. After moving out of the Tomb I headed to the Metcalfe's Canopy. Built on a grassy mound, the canopy is not very remarkable in itself but the view of overlooking Qutub Minar and Jamali Kamali Mosque and Tomb is an absolute treat to the eyes.
The park area is spread over 200 acre so it gets a little difficult to map out other monuments. Though there were direction boards but they hardly helped and I asked for directions every 5-10 minutes.After roaming around the park I reached the rose garden and it was just so damn beautiful, don't miss out on this. Dragging myself out of the garden (unwillingly though) I directed myself to the Quli Khan’s Tomb.The Tomb of Quli Khan is another example of the glorious heritage that the city owns. The tomb has colored tiles on the exteriors and painted arches as interiors. The last stop of this little trip of mine was the Rajon ki Baoli. Rajon ki Baoli is a Mughal era stairwell and is one the better known monuments among the others. The Baoli is beautiful in its structure but is now filled with sewage from the neighborhood. The stairs leading up and down the well are steep so be careful, and there is wall mosque too, adjacent to the Baoli. Apart from these, there are many more monuments scattered in the park (approx. 100). The park is vast and can be the first choice for photographers and those who love to adore architecture and the heritage of the city.You can even have a small picnic of yours here. The monuments are a treat to watch and cherish the history and heritage of Delhi but are miserably taken care of. The most disturbing thing is to see the scribbled hearts and names on the monuments making the magnificent monuments tainted with stupid marks.
Mehrauli Archeological Park has an abundance of monuments but sadly is forgotten and ignored by tourists as well as the authorities. I had an amazing day here and will suggest you to surely visit this place at least once.
Nearest Metro Station: Qutub Minar
Entry Fee: free
Timings: sunrise to sunset
Words of wisdom:
Carry water bottles and wear comfortable clothes and shoes as you will have to walk a lot.
Brush up your knowledge a little about directions to the monuments to save your time and energy.
Don’t let someone scare you off with some ghost stories and stuff, there isn’t anything like it.