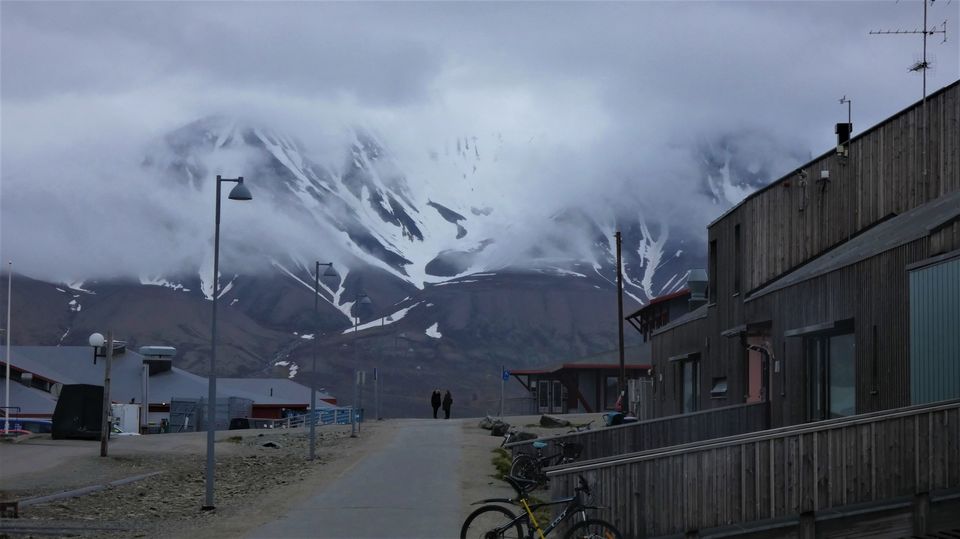 Longyearbyen, the world's northernmost town is only 650 miles from the North Pole, making it one of the most remote human settlements on Earth. The uneventful three hour flight from Oslo is made memorable in the last half hour, with an unmatched spectacle of undulating fjords and mountains during the descent.

The touchdown at the most northerly commercial airport on the planet was quite unexpected. The plane skidded and bounced on the runaway several times before stabilizing. The ground underneath the airport is unstable due to thawing of the permafrost and landings and take-offs have become increasingly bumpy.

Longyearbyen came into existence when an American speculator John Munro Longyear set up the Arctic Coal Company in the year 1906. The coal mines are long gone, but ironically, the town's existential crisis is attributed to emissions from the burning of fossil fuels.

I walked down the stairs and into the small airport. A polar bear statue occupied centerstage at the waiting area. Outside, there was a large signpost with distances and directions to cities of the world and a spectacular lake surrounded by snow covered mountains.

The team boarded the waiting buses while the luggage were transported separately to the ship. There were several hours before embarkation and the bus took us for a tour of the city. The bus driver doubled as our tour guide, providing a commentary about the many quirks of the unique settlement.

"Welcome to Longyearbyen! At 78 degree North, we have the world's northernmost airport, university, post office, church, museum and ATM," she announced over the bus PA system. "You will not find any street names here, they only have numbers."

"There are no roads outside the main settlements and cars have limited utility in Longyearbyen. The best way to get around are snowmobiles and there are twice as many of them as people. Due o warming and the loss of ice cover, transportation is becoming a challenge for people here and all over the arctic."

She informed us that the town is located close to Isfjorden, the second largest fjord in the Svalbard archipelago, which has not frozen in 10 years. "Glaciers in the fjord are melting faster due to warmers waters beneath, in addition to higher temperatures," she said, adding that her other job was at the local museum.

We stopped for lunch at the Funken Lodge, at the outskirts of the town. The notice outside reminded me of traditions back in India. "The people of Svalbard remove their shoes while entering most buildings. We hope that you will respect this long-standing tradition and remove your outdoor shoes when entering this hotel."

A few abandoned coal mines were visible up on the surrounding mountains. The food was lavish, and a surprise, considering that all the supplies were flown in from Oslo. There was a counter selling souvenirs, postcards, scarves, magnets and other gifts. I bought a postcard, jotted down my home address, and handed it over with the cash. It will be fun to see if it is delivered before I get back!

After lunch we headed out from the settlement and into the Advent Valley. Camp Barentz, named after Dutch explorer Willem Barentz who discovered Svalbard. It is located in picture perfect surroundings at the foot of the Breinosa mountain. We could see half a dozen Svalbard Reindeer around the camp while a pair of Snow Buntings frolicked across the pathway.

There were several wooden cabins and a cluster of dog houses with over two dozen Alaskan and Siberian huskies. One of the buildings, Barentz Hus, is a copy of the cabin that Willem Barentz and his crew built when they were forced to winter at Novaya Zemlya in 1596.

We gathered around inside a large tent with a fire place, listening to stories of Barentz and polar bears. All the hosts were armed with shotguns. "With more than 3000 polar bears resident in the neighborhood, the residents of Svalbard have to move around with high-powered rifles for self defense," one of the hosts said.

On the way back to town, we stopped by a lake with nesting areas of Common Eider ducks and Barnacle Geese along the way. "You might have heard that cats are not allowed in Longyearbyen. That is because the town and surrounding areas have an abundance of bird populations and ground nesting birds are protected," she said.

She pointed out towards the row of houses we passed nearing the harbor. "Most houses in Svalbard are built on stilts. During the summer, the active layer of permafrost melts and the stilts or piles prevent the houses for sinking!"

We learnt that temperatures sometimes plunge well below -40 C during the winter, but that is not the only challenge for the 2500+ residents. Unlike most places, people of the High Arctic don't see the sun everyday, enduring over four months of total darkness every year.

"Avalanches have emerged as a new threat to us residents, is due to the loss of ice cover in the mountains. In 2015, 2 people were killed and several houses were destroyed," she informed. We got some time to walk around and explore the town on foot. I realized that we could walk around the whole town in a couple of hours. After a while the strong winds made it too cold for comfort and I went back to the bus.

We drove to the Svalbard Gallery, passing the avalanche hit area, a church and a small graveyard. Before the trip I had learned that Longyearbyen is the one place on earth where you are not allowed to die! "The reason is that bodies do not decompose and the only graveyard was closed nearly 70 years back. The dead, and terminally ill people have to be transported to mainland Norway."

One of the reasons for my opting for the tour was to see that the Global Seed Vault. I was disappointed that it was still being repaired and closed to visitors after the unexpected flooding in October 2016. Also known as the Doomsday Vault, it was built as a backup for humanity with millions of seeds and features to preserve major food crops for up to hundreds of years. Unfortunately, high temperatures and heavy rainfall caused a damage to the infrastructure less than 10 years after its inauguration.

We drove past the vault to reach one of the earliest mines, right on top of the mountain that overlooks the airport and much of the town. The mine was long closed, but has been preserved to remind residents and visitors of the past and also the consequences of climate change from fossil fuel emissions.

The last stop of the tour was the Svalbard museum, which houses an amazing array of artefacts, models and scaled environments representing the rich cultural and natural history of the region.

"It is time to tell the truth!," the guide declared, on our way to the airport. "Parts of the Svalbard archipelago has warmed by an average of 5 C in just over two decades. The loss of sea and land ice has already impacted the lives of residents and the wildlife of Longyearbyen."

Once we were airborne, I looked back at the settlement, which was already a tiny speck in the vast landscape. The take-off bumps reminded me of the existential challenges of Longyearbyen and I wondered if I will ever be able to return to this extraordinary place.