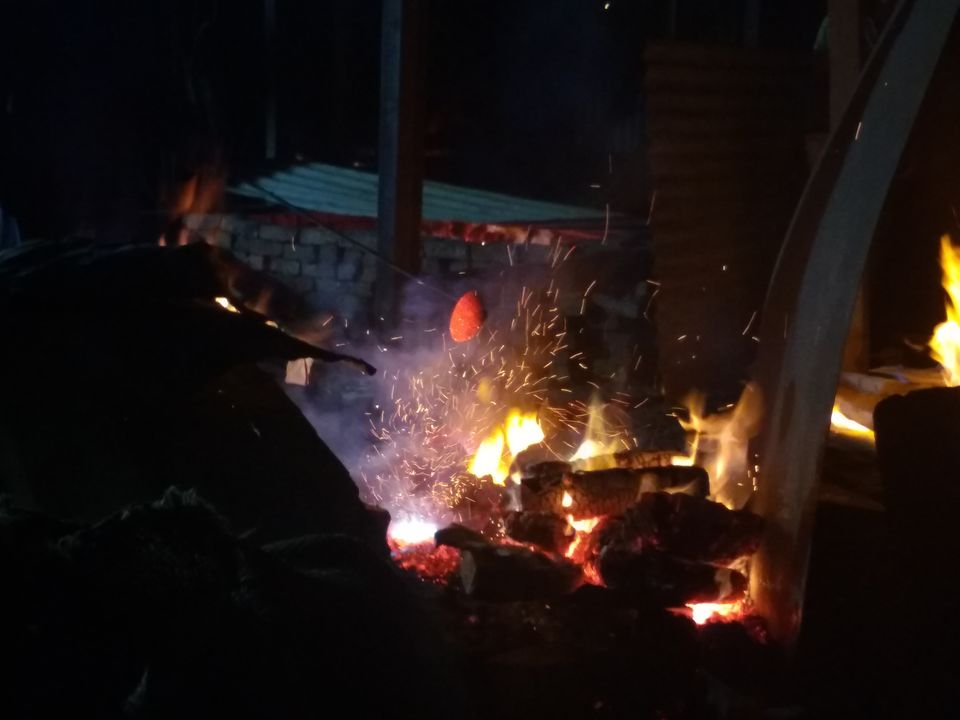 The air was still. It was a silent dark Panchgani night. The roads were empty and unused. OnWheelz Amusement park lay eerily quiet, all its bright rides seeming frozen in anticipation for their use. The rumoured leopards shiftily trudged throughout scanty forest cover and the deepening blue of the sky had several pinches in it. Devrai Art Village also appeared as stalwart and warm as it would every night. The hub of activity that extended over the night was barely discernible but for the shifting flames coming up around the furnace.

You slough up the loose gravel mound leading from the back gate. In the distance, a group of men stand shoulder to shoulder doing a slightly inebriated jig, swinging like an intermittent pendulum. It’s dark blue around and the chrome glow from the work shed lamps only crisply outlines the moving conjoint silhouette. Liquid courage seems too apt a term for this range of encouraging beverages. Drinks that fill you up with strength to dutifully see through your actions till they are complete. You let your head seesaw for a while and amble about in light conversation as the alcohol prods you to.

It is 12 am but the work began only a few hours back. Four crucibles lay baking and spewing up fire. The quivering air above them only makes the whole deal appear that much more illusory. Glints of silver catch your eye as you walk towards the furnace area and spot the piles of scrap brass lying near it. 300 kilos of taps, fittings and other disposed parts all arranged to be melted in a while. The whole ordeal is a seemingly everyday task of immense effort and human power. However, the dimness of the night and black trees overhead only lend an oddly eerie vibe to the act. There is heat and stomping and crackling converged on one small spot surrounded by the otherwise asleep hillstation. Pitting dark blue against localized sources of light only blows up the contrast to a dramatic level. Burning white dots above, sleepily drifting yellow lines of the embers as they dissipate into the air and churning bundles of orange in the brick pits.

Mattresses are spread outside the worksheds and on the tin roofs with craftsmen sprawled across them on their break. There is a constant bustle as men take turns clothing themselves in the indigo suits and bundles of cloth to do the constant work of stirring the melting brass, lifting out dust and adding more scrap metal. The duty and focus on each face that passes you cranks the intensity of the night to a palpable level. Yet, each break off into grins and casual tipsy conversation when their round of work has been completed. Darkness brings a comforting intimacy along with it and everyone who shares it together automatically breaks open that relented restful part of them to the other. All bright niceties and strained politeness vanish with the brooding weight of the night and there is calm, slow and honest conversation. The traces of sleep in your head only mix with your words to make the whole mood that much dreamier and lullaby-like. Your head unfolds itself to share all its contents to any attentive person sitting nearby and you’ll exchange theories of the world amidst this isolating backdrop.

As you lay perched on the chipped steps to get a view of the melting, craftsmen take turns taking their rest by your side and sharing gentle views about the work, their life and this whole magnificent place. There is a general unspoken conviction firmly planted into each person present that strings them together in unison and determination. The hours roll on as the green flames of heated brass mix about. The sweet tea you are handed despite being nothing more than a mere spectator makes their purpose now clearly yours too.

A monstrous bull is what is being cast tonight. Everyone fervently assembles when it is finally time to pour the metal. Metal chains crank up as the huge mud mold is raised and slid onto the ground. As usual, the duties are discussed and divided with baskets of wet mud, cloth wrapped sticks to dab mitti onto weak spots of the mold and buckets of water lying about to cool the whole process. Men go in to scoop cups of brass and the scene gets more hellish for a few minutes. Green puffs from each cup as it is dunked into inlets of the mold with accidental outpour from weak spots. There are hisses as prompt mud soaked sticks block the rogue brass. The previous steady progress of duty turns heads to now accelerate to a dizzying pace as each worker rushes about perfectly doing their duties. Men stand prepared to douse the others in water and wet their suits as they emerge from the furnace area. Still, a line of red eyed sweat pouring workers lie seated on the edge of the work shed. It goes on until the last of the inlets has been filled to the brim and the mold lies there, small flames flickering from each funnel, brown and stagnant. People clear up as the last part of pouring the brass on the ground takes place. Streams of it drip down in glowing hurry and there are little networks of this cooling metal everywhere.

It is dawn. The sun is back. Somewhere along the way the absorptive indigo above lightened to a lilac. It will only get lighter and brighter henceforth and then the day will properly begin. The day with its pockets of human labour of collars both white and blue will commence, summoned by this sunny disk, people rushing to complete their duties while the light remains. Things are polished, clothes pressed, hair washed, faces freshened and everything made cleaner to seem presentable in this exposing light. People fall into their habits of eye contact, friendly small talk and presentation as they go from place to place. Even in the gallery of Devrai Art village, the end products lie gleaming, polished, in a tinkling bunch for customers to gawk at the beauty of and eagerly purchase.

The secret hard work of the night has been wrapped up, the pouring water from the pores wiped away and the tired bodies resting in fatigue and heat as their task was finally successfully completed. We come to hear of their story, we see their brilliant skill and raise our eyebrows impressed, but we forget to think of the 1200 degrees of heat they end this production of art with every time. The work is done, the new bull lying in wait to break out of its mold and the burning metal seeping into every inlaid detail of the flawless wax cast. All the components of that night- the men, the indigo bits they wore, the cooling metal and the crusty furnace lie as evidence to the hushed metallic conjuring. 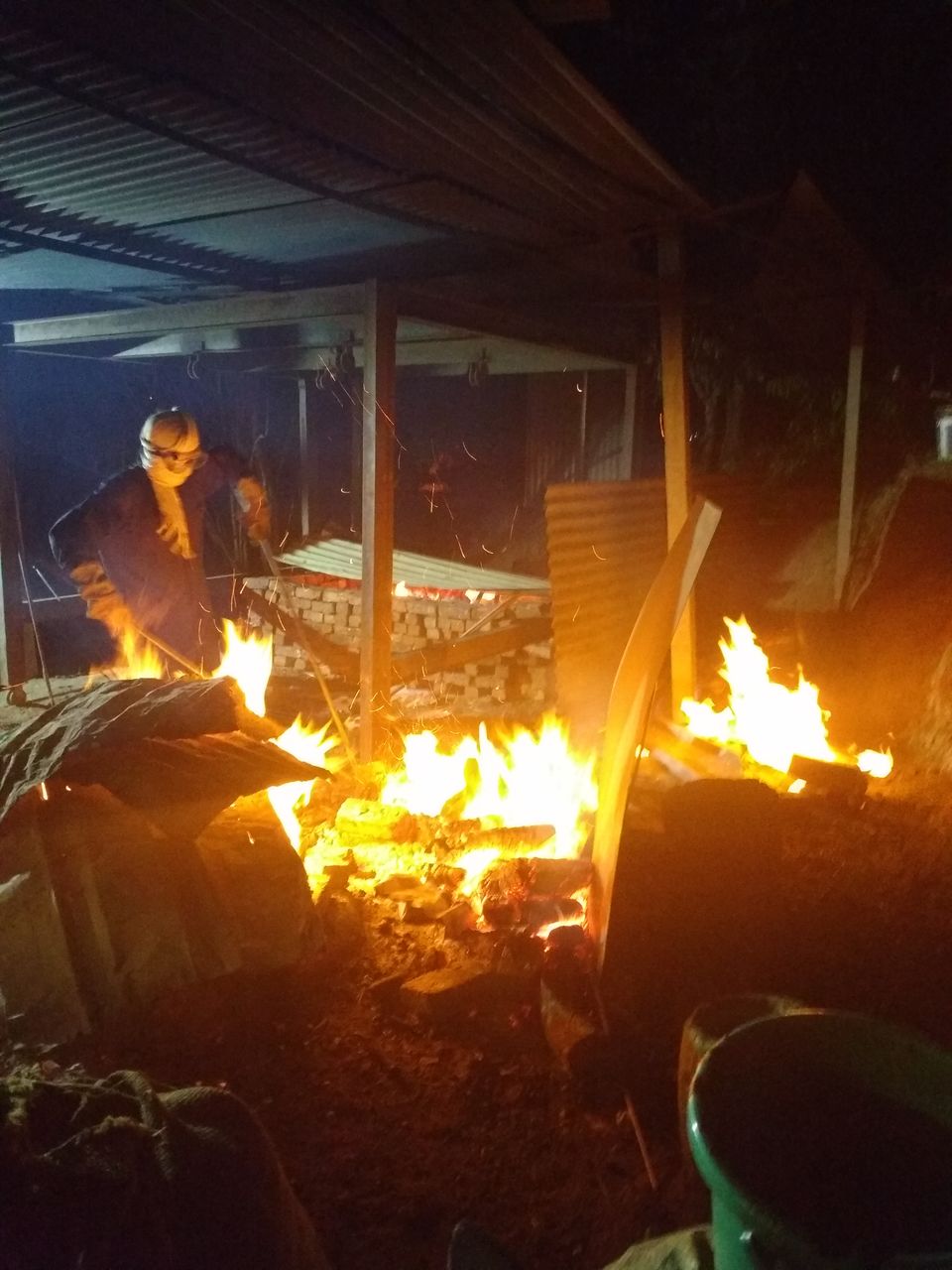 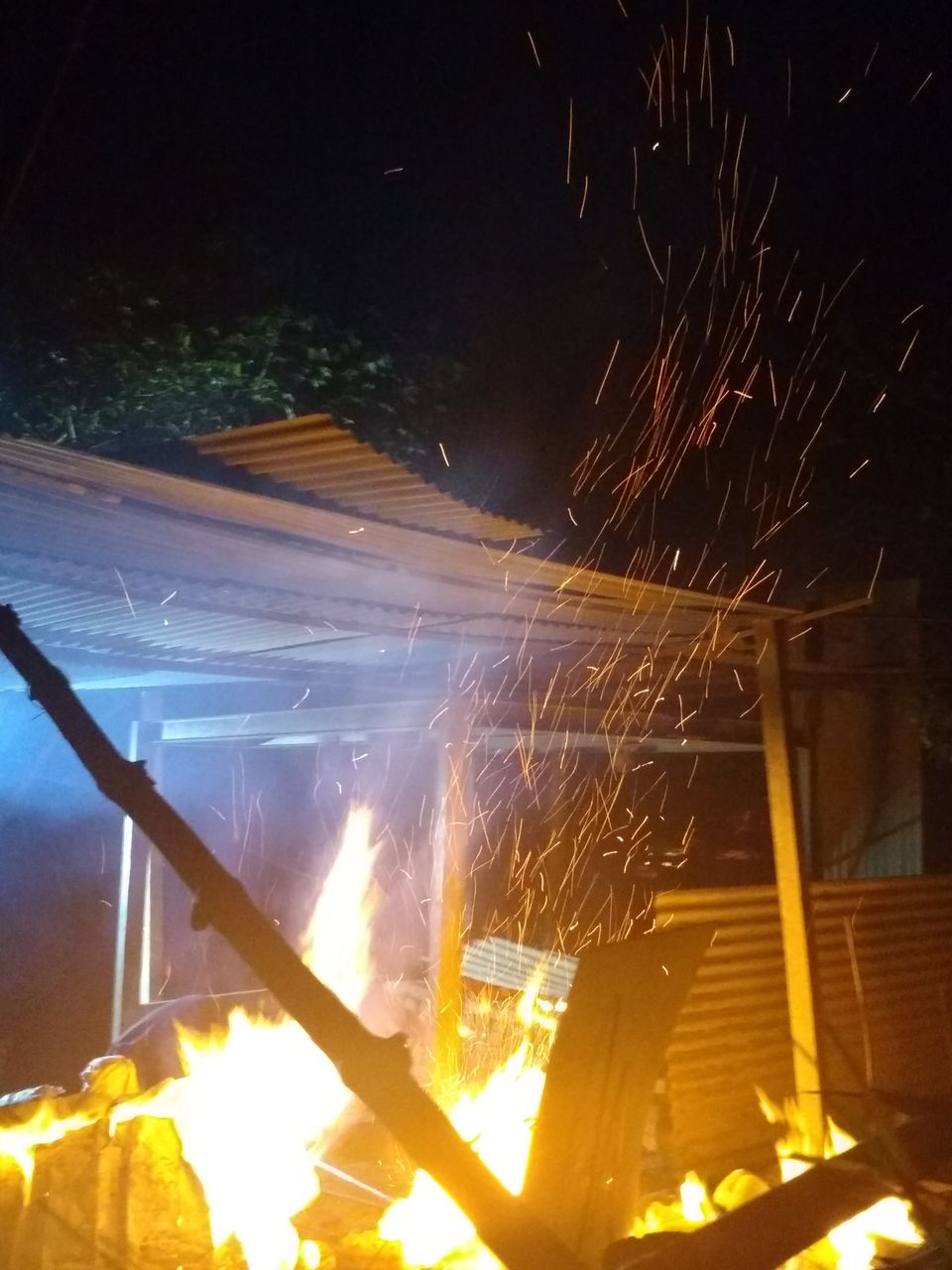