Silhouette of Monks captured in Paro amidst a local Buddhist ceremony. 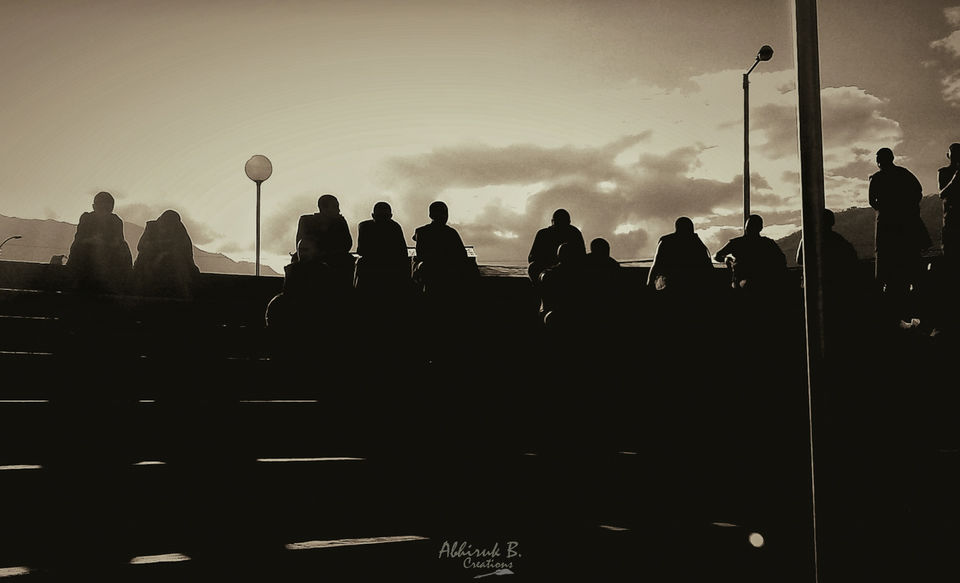 Many a time, a traveller usually is at a loss to describe the beauty of discovering a new location. Sensations, often new to his eyes accompany the many sounds of winds and people that reach his energetic mind, a bliss like any other. So when, a close friend of mine after a hearty research concluded that, nestled within the hills and valleys of Bhutan, lay the most beautiful little city in the Himalayas; she convinced me and my family to pack our bags and fly to a city which barely registered into the lists of exotic vacation destinations.

Apprehensive though very excited for my trip, I landed in the only international airport of the country, staring at the many hills located around it; on a tiny airstrip which reminded me of little deserted islands in the middle of oceans. A few minutes later, coming out of the airfield with the pleasant tunes of the wind whistling into my ears, I stared dumbfounded at the tranquility that Paro was all about. People roamed the streets wearing colourful robes, furry dogs responded to my call and ran with their tongues wagging out and the occasional monk stopped and bowed his head in acknowledgment as people greeted him. My guide, Rinchen, a local who served as a tour guide to newcomers in the country, greeted me like a long-lost relative as he shook my hands with energy and directed me towards our vehicle, a spacious six-seater which drove off amidst the clean and spacious streets as it picked up speed and exited the city, moving towards our resort house situated at a low hill, overlooking the city.

On our way, our stomachs grumbling; I asked our guide, Rinchen to stop by a local restaurant so that we could indulge in the local food and brew. Stopping beside a square, we moved towards a richly decorated two storeyed house. The bottom level, fitted with chairs and tables, the restaurant while the upper level was later revealed to be the house of the owners. Speaking to the guide about it, I was informed that the locals, in the absence of any major industries or corporation had to shuffle between farming and tourism to sustain their income. Gazing around at the massive stretch of greenery that filled my eyes as I looked outside the windows, I could see that the country had sacrificed luxury and development to ensure a more nature-friendly nation. Musing over these thoughts, I finished an excellent bowl of Thukpa (Tibetan noodle soup) and a glass of local beer which was surprisingly good and cheap.

With my voracious appetite now briefly satisfied, I began moving towards the square which by now, had attracted more than dozens of people. Arriving closer to the scene, I could see a group of monks playing native instruments while their seniors handed yellow threads to the citizens. Nudged by my brother, we moved towards the queue that extended well beyond a hundred people now. Standing in the line, surrounded by strangers both by faith and ideologies, I, very surprisingly felt no discomfort. The eerily beautiful tune played by the monks further lent the atmosphere, an aura of near-perfection. The centuries old tradition of the monks imparting the blessings of the Buddha upon the commoners in the town seemed to unfold right before my eyes as I walked in a daze, a smile on my face as I humble acknowledged the monks who gave me a thread as I walked past them. Fumbling for my camera, I turned and managed to click a silhouette of the monks sitting on an elevated platform, their robed figures cloaked in shadows amongst the pale mid-noon sun. (Refer to cover pic) I tied the thread around my wrist as I chanted the prayer which I had heard from the lips of the monks, a single sentence filled to the brim with divinity and sincerity, 'Om Mani Padme Hum.' (Hail to the jewel in the lotus)

Tranquility has many words. Travellers roaming in hills describe it to be the song of the birds at a glittering dawn while adventurers like me wish to describe it through the quiet that descends after a long journey. Tired from the many journeys that I had to take, both mentally and physically, to reach the little town; I along with my family, checked into the resort around evening and proceeded to our rooms. It was around evening, somewhat 5'ish; I can still remember the pale sky and the songs sung by birds which flew overhead, I walked to my room; a beautiful wooden cottage with a small balcony outside the door, two spacious chairs lending company to a brown coffee table, overlooking the hills and the dying rays of the sun which seemed to hide behind them. The scene lent a deep nostalgia to my weary senses, images of landscapes drawn when I was a child leapt up to my mind. Preparing a pot of coffee, I browsed through my tour itinerary and noticed that tomorrow, we were scheduled to visit Punakha, another glittering gem of a place in the crown of Bhutan. I sighed as I gazed at the hills; I wanted to cancel all my other plans and sit here and just write. But glancing across the day and all that it had offered me today, I was aware that many more encounters would lie on my path. I pour the coffee on a cup and sip it, it's bitterness gifting me an instant surge of energy; tomorrow was going to be heavenly.

For more stories and interpretations on my many adventures as I tackle unknown streets and familiar cities with my lens and pen, follow @shadowpoet56 on Instagram.