The 'Busy' Streets of Pondicherry 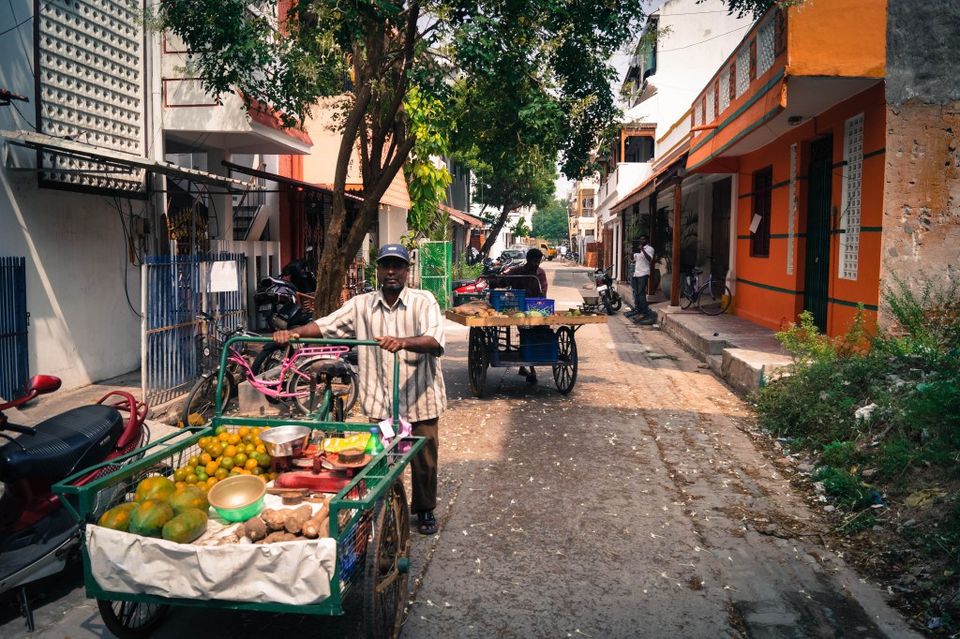 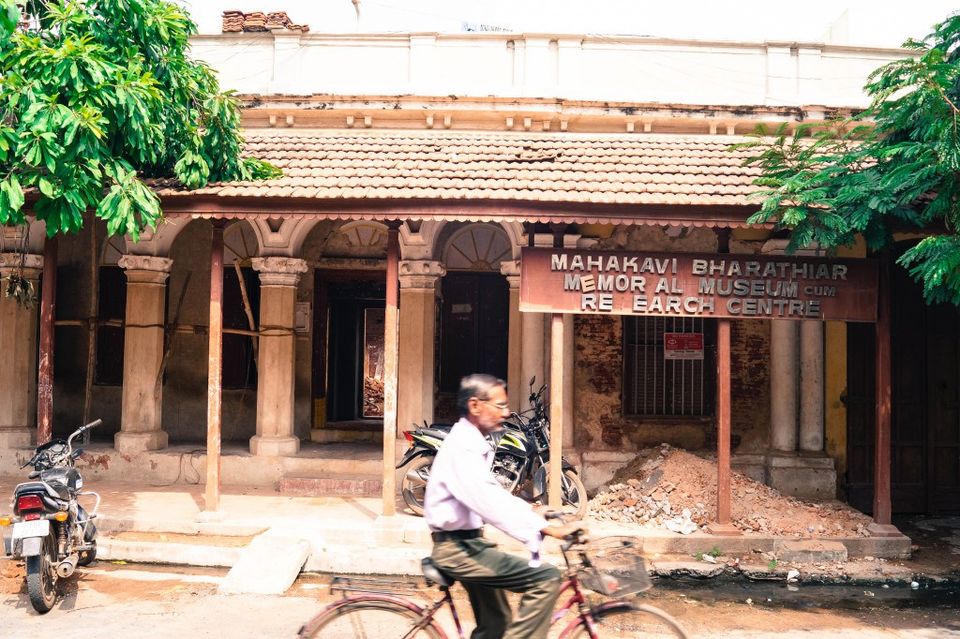 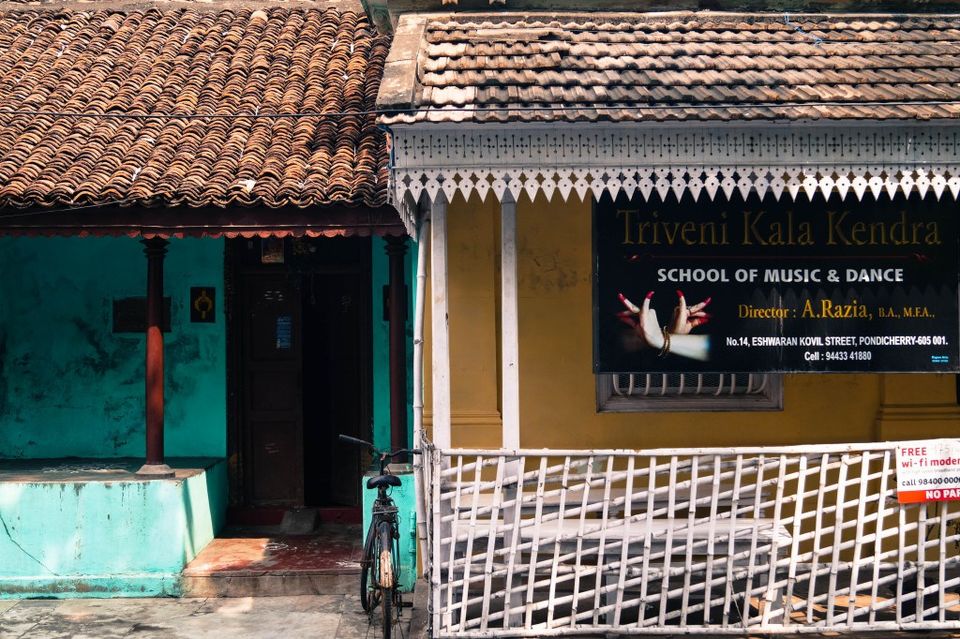 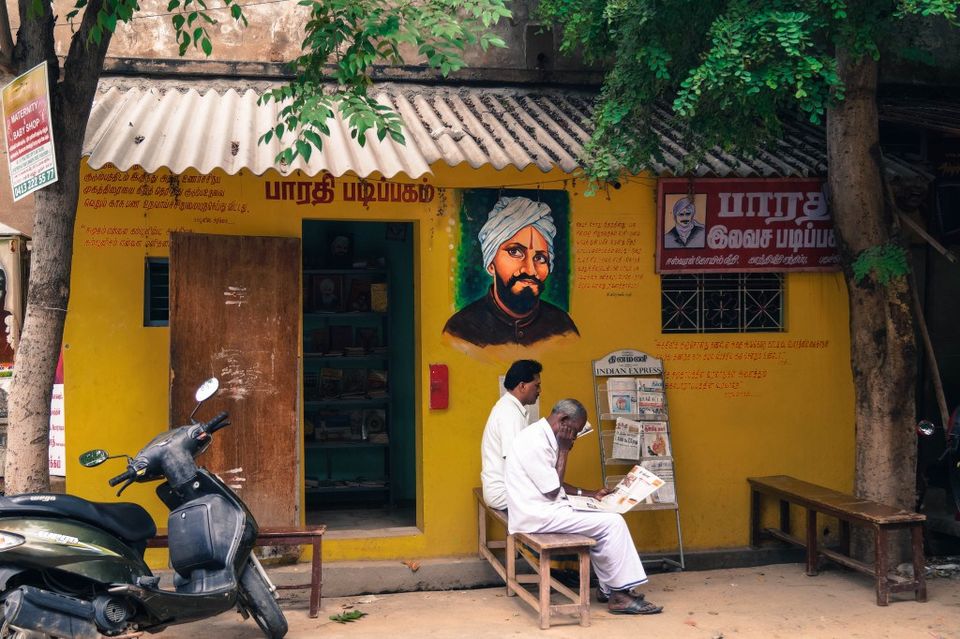 Recognise This Building from The Life of Pi? 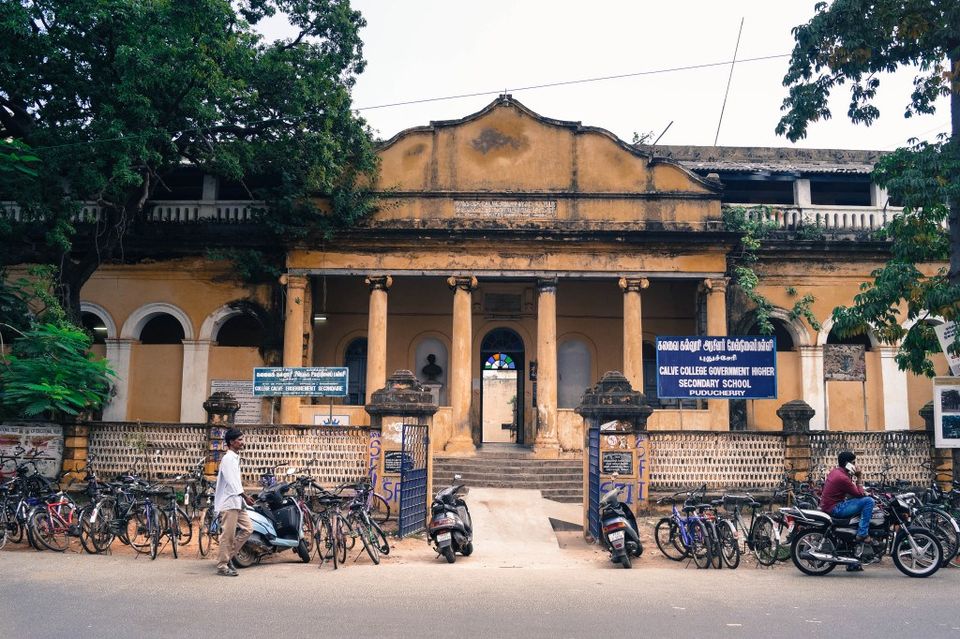 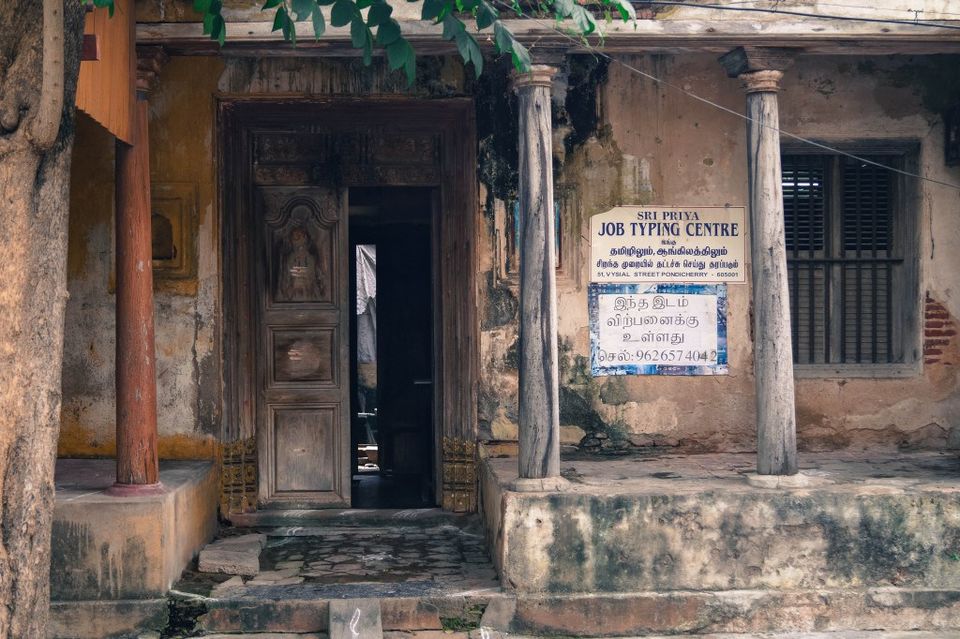 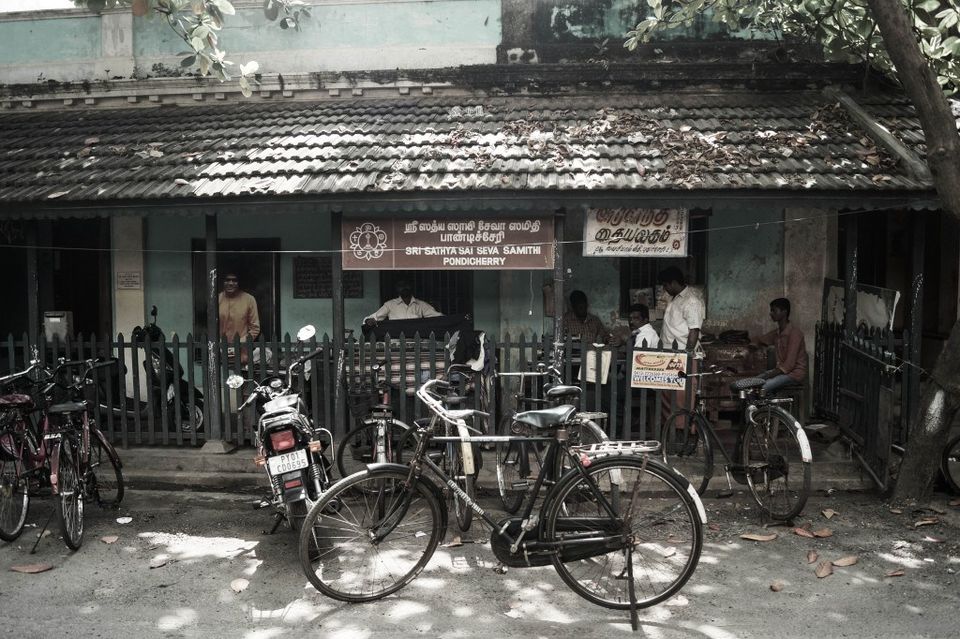 A Candid Moment in the Market 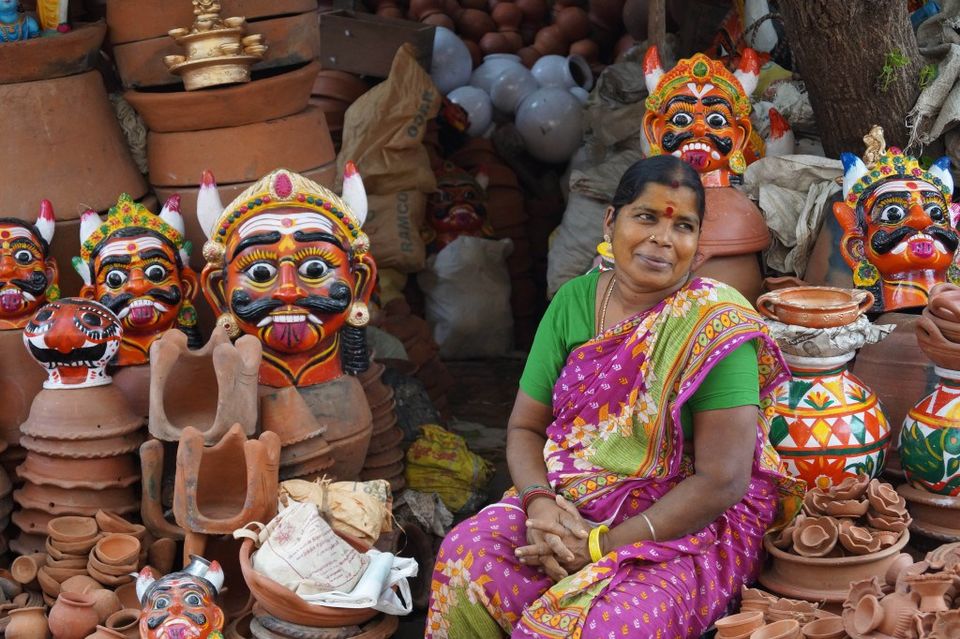 The Flower Markets of Pondicherry 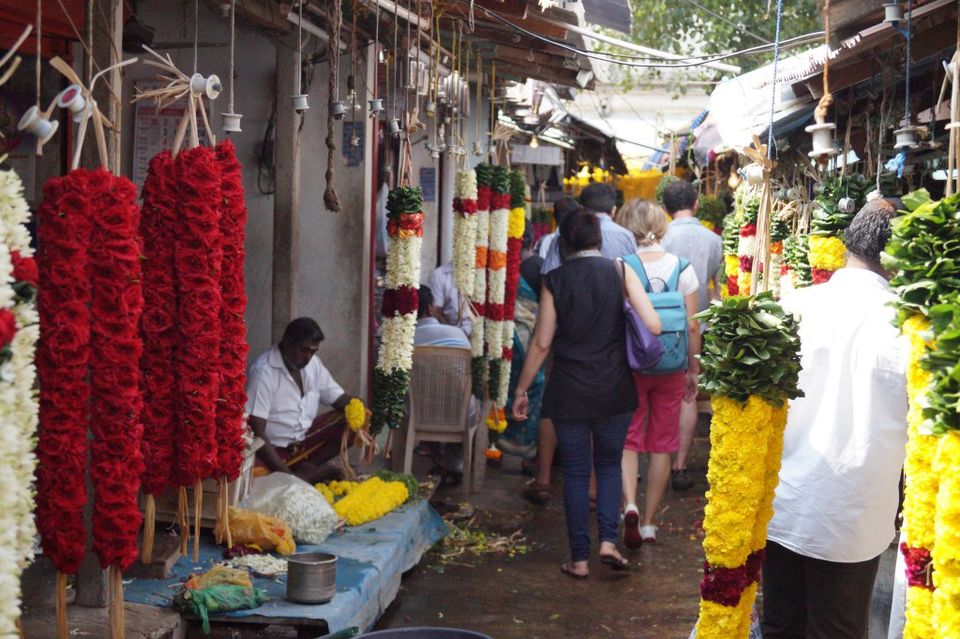 A Festive Moment on Mission Street 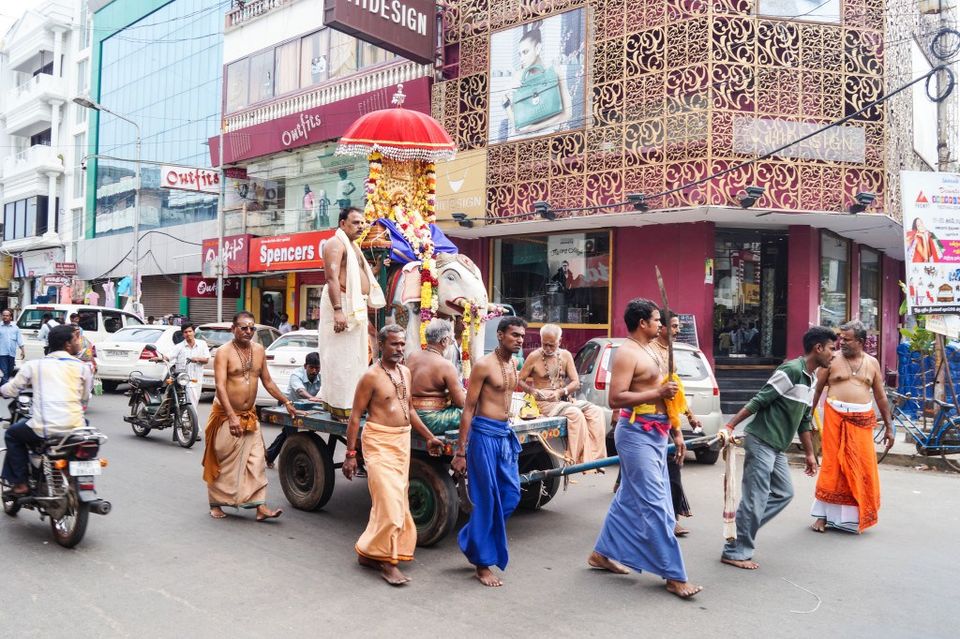 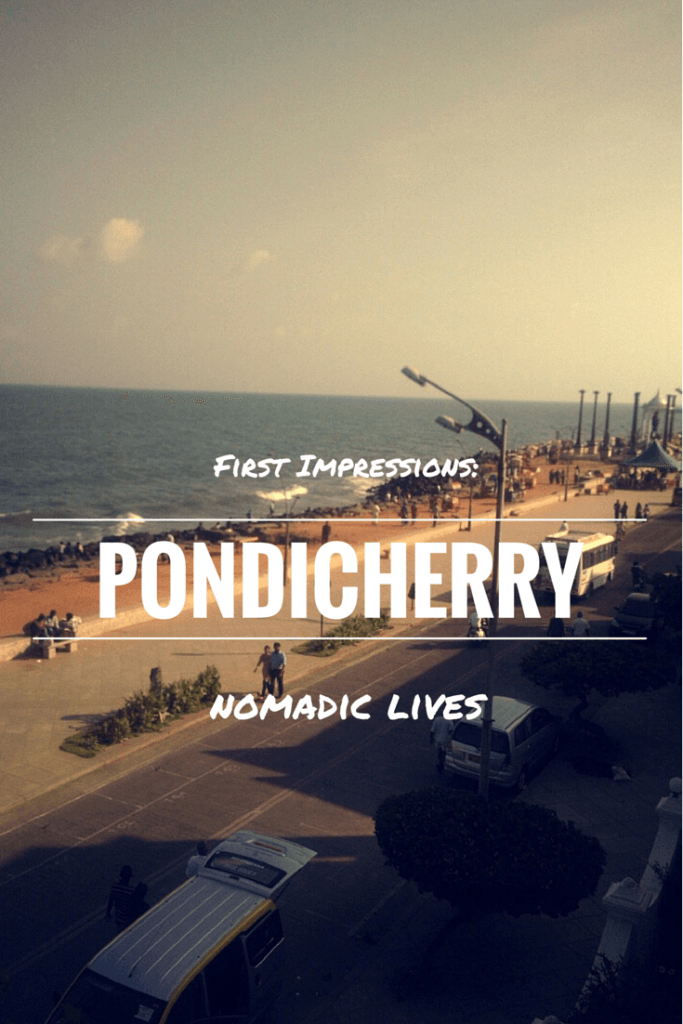 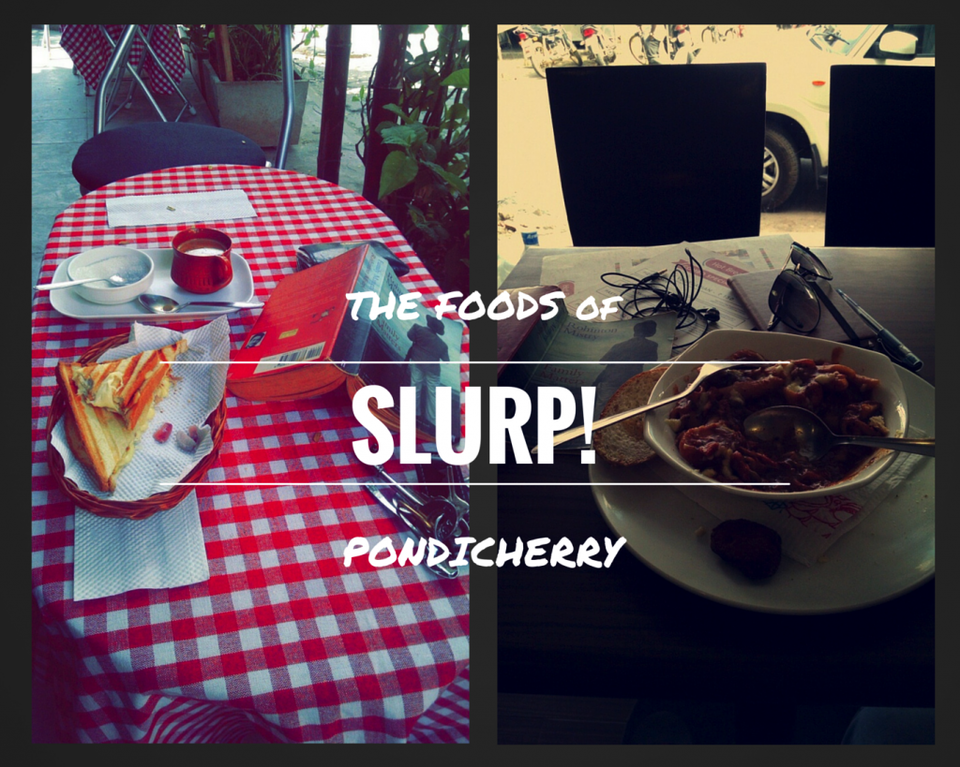 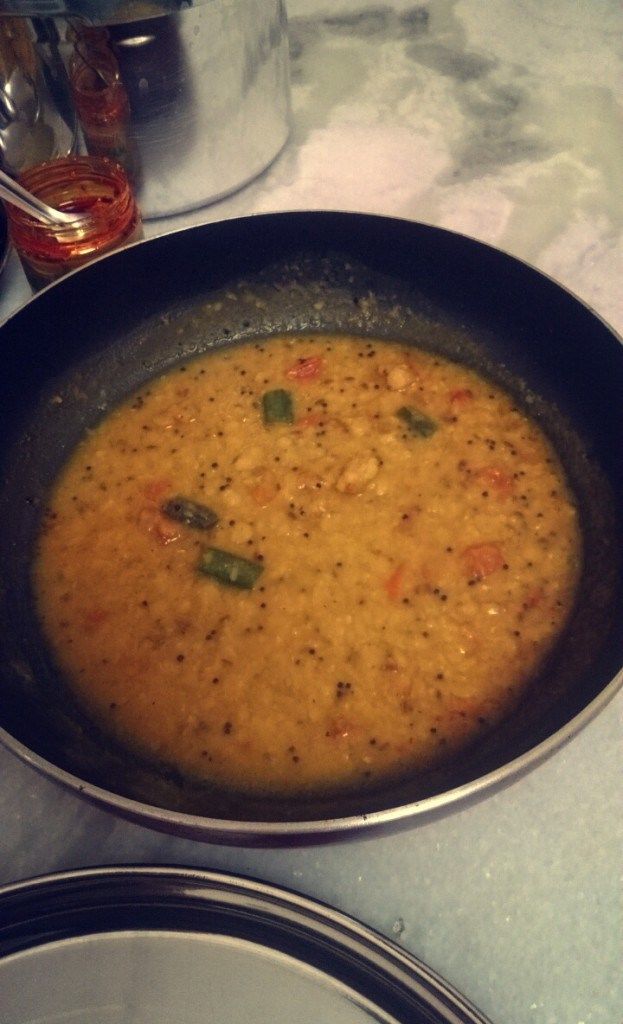 The only way to make sense out of change is to plunge into it, move with it, and join the dance.

I couldn’t think of a better one-liner to introduce this post. The day I started writing this post, was an exact month from the day I left behind everything I knew and moved to the wonderful little town of Pondicherry.

Even by my mercurial standards, the past one month has been a bit of a blur. In the last 30 days, I’ve changed rooms at least thrice, literally pulled clothes out of a suitcase every single day, worked on an average of 10 hours a day, 7 days a week, travelled to Bangalore and back in a space of 2 days, witnessed a drainage block in my quarters so bad, that we had to call for a suction pump to get it cleared, met some wonderful people, both local and European, found out that keeping a dog/caring for him is easier said than done and (REJOICE!) learned how to cook some food (though admittedly, it is still a work-in-progress). In a town whose official slogan is ‘Give Time a Break…’, that check-list seems extra-ordinarily out of place.

I’ve finally managed to find a tiny little apartment, a small space for myself and a little spare time to gather my thoughts and write a virtual update for all of you guys! When I started writing this, I was a little confused over whether to talk more about my new surroundings or my experiences on living by myself for the first time. Eventually I decided I’ll just let my mind ramble and see where it gets us!
So here I begin, with a few interesting quirks about Pondicherry:

They Are Not Kidding When They Say “Give Time A Break…’

Though I’ve lived my entire life in ‘the city that never sleeps’, I’m not uninitiated to the ‘laid-back Luke’ vibe of small-ish coastal towns – eventually, I’m a native Goan, and who knows the art of loafing better than the Konkani manoos, right? And hence, despite several warnings, I thought I was prepared for the slow pace at which things move along in Pondicherry; I was mistaken…and HOW! Things move along at an atrociously slow pace! A plumber promising to arrive in an hour, shows up after 4; the banker takes half an hour to process a self-cheque; the waiters at a highly reputed, heritage hotel take 40 minutes to bring you a pint of beer; the guy at the provision store takes 15 minutes to count and hand-over half a dozen eggs. Oh! And just by the way, I’m not in the least bit exaggerating; these are all very real timelines. Fortunately, I think after Mumbai, I find this a pleasant change – to slow down a little and savour the tinier details more. How long before my patience runs out though, I couldn’t tell!

Pondicherry is Not All About the ‘French Quarters’

When I started telling people I’m moving to Pondicherry for a while, nobody could stop talking about how beautiful the French Quarters is and I should definitely visit (I’m not even sure that advice made any sense given I intended to live here, and would eventually stumble into it, even if I swore not to). There’s absolutely no doubt the French Quarters or the White Town is spectacular, and extremely beautiful; but I’m tired of people and travel magazines holding it up as Pondicherry’s saving grace. The culture, the architecture, the people and the eateries are just as beautiful in the Heritage Tamil Town, as also the Muslim Quarter. I wish people spoke about the ‘thinnai’ – the flat roofed verandahs from typical Tamil houses, which were actually built as a resting spot for weary travellers, with as much excitement as they described the vaulted arch-ways or the open courtyards of French houses!
I’m not exaggerating, here…have a look:

The Food is Honestly Beautiful!

I’ve always said, and I still maintain that I’m not a major foodie! Still, I find myself really enjoying my meals here. Be it the dainty European delicatessens, bakeries and cafes, the heritage hotels or the bustling Tamil eateries, I’ve discovered some wonderful flavours here. Sure, there’s an over-dose of ‘rice’ and I’m not very fond of it, but if you can look past that, Pondicherry is a foodie’s paradiso!

Alcohol is cheap here, and I don’t mean cheap in comparison, it is SICK cheap! One of the reasons Goa has become a massive party destination is because the alcohol is cheap and abundant; and yet, the rates in Pondicherry will likely put Goa to shame. A couple of weeks ago, we bought 750ml beer bottles at INR 57 EACH (to put things in perspective, that is about $0.90/€0.81). I mean sure, we bought it at a wholesale wine shop, but I have never seen alcohol so cheap anywhere in the world! Psst…if you’ve, you know who’ll want to know

Want a wonderful list of local joints for a drink or 10?

This Is One Place in India, Where People Are Beginning to Prefer Indian Tourists over White Folk

For whatever reasons, we Indians are fascinated by anybody and everybody white-skinned. Everywhere I’ve been to in India, people have had a preference for international guests, over domestic guests. What may be the potential cause behind this is beyond my immediate concern; but here in Pondicherry, I was pleasantly surprised to find that locals are beginning to prefer domestic travellers over the Europeans & Americans that flock to the town perennially. Just the other day, the owner of a sweet little guest house was complaining how a group of 3 French tourists slyly checked out without paying for their stay. Just a few hours later, I heard another guy who runs a tour company lament over how the foreign tourists in Pondicherry look at the right side of a menu card before looking at the left. There’s a hint of a shift in how people from both camps are beginning to spend their money in Pondi at the moment, and it looks like the Indians are beginning to emerge as the more ‘high-value’ client. I’m not entirely sure why, but I’m really happy about it – I’m guessing I’m just tired of having this feeling that us Indians suck up to foreign travellers far too much; it simply makes everybody uncomfortable (thoughts?)

On my very first weekend here, I found myself home alone in a 3 storied house with nothing but a baby-dog for company (he’s awesome, bless him – but not much good when you want to talk, no?) So I called up a friend of mine to figure out if he was up for a drink. He invited me over to one of his friend’s place where they were having a small party-of-sorts! He asked another of his friends (who I’d never seen/met before) to pick me up. The guy picked me up from home and drove me way out of town and into a secluded area; at some point, (albeit only for a moment) a thought DID cross my mind, about how easily I’d placed my trust in this guy I didn’t even know, and how if he willed, he could (at best) mug me, and leave me stranded and there wasn’t a single thing I’d be able to do about it. A few hours later, I realised what a terrible person I had been to doubt this person and his friends, who had shared their beer and food with me and welcomed me into their house as if I’d always belonged! So…to all those half-wit idiots who’d told me how unfriendly the south can be, especially when you look like an outsider and can not speak the language…do go fuck yourselves! Everywhere I’ve been so far, I’ve been treated as an equal and often with warmth I didn’t really expect

Independence is a Word Thrown Around Far Too Lightly

I saved the most important discovery from my new life for the last, because this is extremely vital. We throw around ‘independence’ as a term far too lightly. I’ve always considered myself extremely resourceful, adaptive and most importantly ‘independent’. By most widely accepted definitions, I am too! I pay my own bills, I call my own shots…I always have and the few times I’ve been left alone to fend for myself, I’ve coped reasonably well (in fact enjoyed the apparent ‘challenge’)! Sounds familiar, right? All it really takes to burst that bubble is a month on your own in a city where you know almost nobody. The countless things we take for granted – like the roof on your head, your own tiny bedroom, the cup of tea and breakfast every morning we cringe over, the often shunned company of your family begin to feel like what they truly are – a privilege. The plus side is that every single thing you manage to pull off smoothly – even something as trivial as cooking a ready-to-make meal for yourself feels extremely empowering. I’m learning the true meaning of ‘independence’ and I have to admit, I’m enjoying the challenge so far

Sure I’m missing home, my friends and family back from Mumbai, but this is an exciting phase and there’s so much to learn each day, is this what it feels like to fly?