A Trek to 'Fort Rajgad' - the First Capital of 'Maratha Empire'

By The Travel Soul

A view of Fort Rajgad 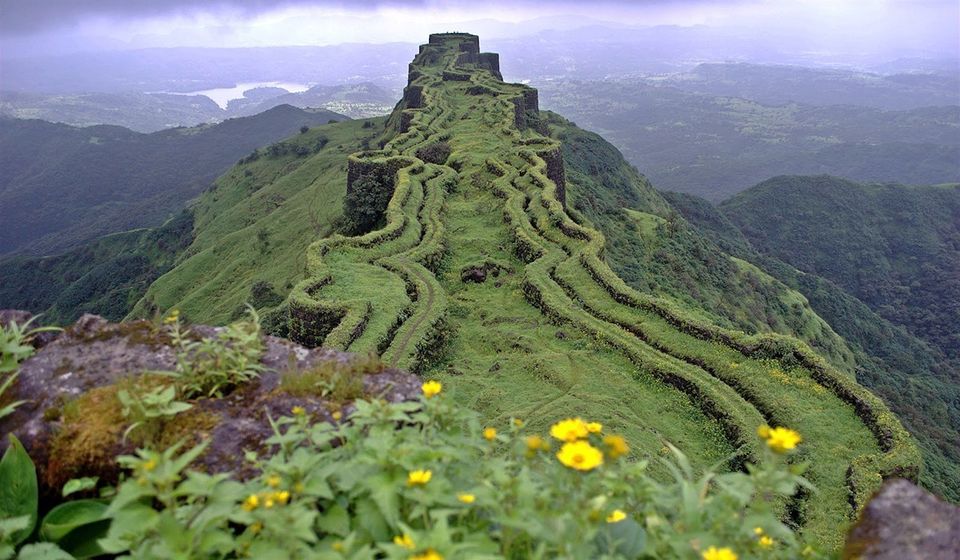 It was drizzling when I reached the base of Fort Rajgad along with my best friend at around 4 pm. A group of 5-7 teens had just arrived there a while ago. They were discussing whether or not to climb the mountain to reach the fort at the top, as it was already late. An old man, who was a local was grazing his sheep nearby. I asked the man how long will it take to reach the top? He said,"It will take around 2 hours" & he advised me not to climb right now as there was a possibility of heavy showers. The group of teens overheard our conversation & they readily turned back. As the teens left with their bikes, we were the only two souls there looking forward to an adventurous trail. Due to the monsoon, it had already started getting dark. There was a high possibility of the two of us getting stuck at the peak of the mountain in case of heavy rains.

'Rajgad' literally means royal fort. The fort situated in Pune, Maharashtra, India, is approximately 4500 feet above sea level and has served as the capital of Maratha Empire for more than 20 years during the reign of Chhatrapati Shivaji Maharaj.The fort offers a majestic view of the Western Ghats. Fort Rajgad, unlike many other forts in Maharashtra, does not have easy going steps to climb up. The terrain is rugged. Climbing up was a bit easy, but the trek back down to the base was going to be hard, in fact, a lot harder if the rains poured down.

My friend said,"Let's turn back. It's quite late. We'll come back some other day." There were signs of heavy rains & a high possibility of the two of us getting stuck in the middle of nowhere. We drove for 2 hours starting from Pune to reach here & I was in no mood to turn back. I convinced my friend that it was going to be a great trek and we made up our minds to climb. With great enthusiasm, we started to climb. The trail was slippery as the drizzle had wettened the soil, making it a bit difficult to climb. We kept going at constant pace. After a while, we stopped to drink water from a stream that was cutting through the rocks. It was like ambrosia to our souls. We were a bit exhausted & the cold water refreshed us. And then, the moderate drizzle took the form of light rain, but we decided not to stop. Thanx to our constant pace and energy, we reached the top in just 45 minutes. We were happy to not have turned back. The view was mesmerising. The mountain was covered in a blanket of purple and yellow flowers. There were also tiny white flowers that seemed like fairies amidst the others. The Western Ghats were visible even through the fog.

We wandered around the fort for a while and climbed the 'Bale Killa' which is the highest point of the fort and the mountain as well. We met a local on the fort who was the only person on the fort other than us at the point of time. Gazing at the beauty of the magnificent mountain range for a while, we turned back. No sooner than we began our journey downwards, the climate turned a bit harsh. It started raining heavily. Thunder and lightning accompanied the rains and it almost got completely dark. The downpour resulted in muddy streams. At certain instances, we slipped & had to surrender to the flow of these streams until we found a rock or strong tree roots to cling on to. We were enjoying it a lot, with cautiousness of course, because a high pace might have resulted in a fall from the mountain edge. With clothes all soaked in mud, we finally reached the base. The trail from the base of the fort to the main road was fully muddy. Our bike was stuck in the mud. We had to lift it out of the mud many times and it was exhausting. By the time we reached home it was 11.30 pm. It had been a fantastically great trek. A day well spent and an adventurous one.