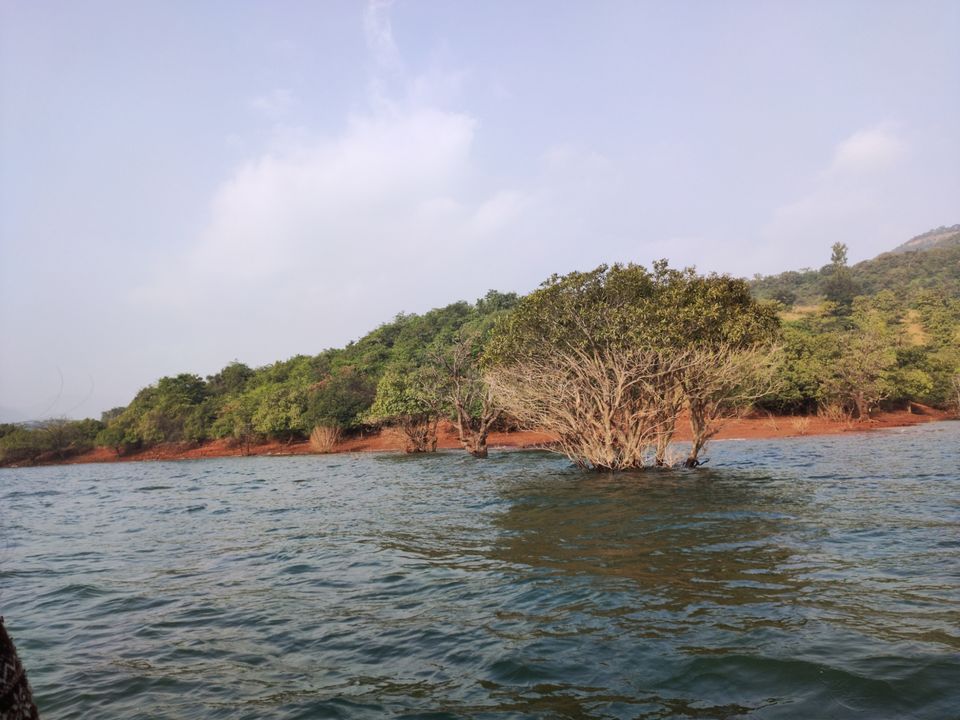 Usually, I do treks only on rainy season, because,‘uska maza hi Kuch aur hai (the fun and thrill are altogether different at that time)’. But the weather those days (mid-December) was as good as that during the rainy season.
The itinerary for 29th December,2019  was :
Start from Pune at 1:00 am by bus
Reach the base village by 5:00 am. After breakfast and tea there, start a boat ride at around 8:00 am.
After a 1hour boat journey, reach Vasota jungle and start ascending. Reach top by 1:00 pm, have lunch and some photoshoot there and start descending by 3:00 pm.
Catch the boat by 5:30 pm and reach the base village by 6:30 pm.
Reach Pune by 11:00 pm
And the cost per person was Rs.1300, which included transport, breakfast, lunch and the entry fee to the jungle. The deal sounded pretty much economic and the one which I had never done before (sacrificing my sleep for a trek :-)).

At around 5.30 am, we reached the base village of Bamnoli.Many people had put their tents near the riverbank of Bamnoli village (just the same as Pawana lake). I woke up with a beautiful sunrise view near the riverside! I thought only I am a desperate and crazy traveler, but noo! I could see many tents and many people who came to do the Vasota trek. By 7:00 am, there was a huge line for washrooms (which were not in a good condition). We had our Poha and tea and then got ready at the bus as that was the only option.

Before getting on the boat for Vasota jungle, everyone was asked to share the number of plastic bottles or any plastic bags(chips, chocolate, etc) each one of us carried. Two police officers themselves checked each person’s bag, calculated the plastic our group was carrying and gave a receipt to Abhishek. The receipt was supposed to be shown at the entrance of Vasota jungle and the group lead had to deposit a certain amount. The reason for depositing money was pretty clear; you will only get your money back if your group gets back with the same number of plastic that they are carrying at the jungle. I liked this idea!! This should be adopted in every tourist place.

The boat reached the other side at 1 hour and I went in search of the washroom (you know, I love winters, but the only thing that irritates me, is you get frequent nature calls!).As soon as we approached the entrance,oh man! There were many groups like us ,preparing to go inside the Vasota Jungle. As told previously, Abhishek (trek lead) stood in a line to deposit the money, we had a brief introduction with each member so that everyone could recognize their group member’s face atleast (if not name) and then started with the trek.

You can see a lot of differences between trekking during the rainy season versus trekking during the winter season. The lush green grass swinging in the wind turns into a pale yellow grass; the roads filled with mud and water during rains, turn into a muddy yet clear road and you get more thirsty while trekking during the non-rainy season (as per my experience). So, even though it may pain your back, carry 3-4 water bottles. ‘Har Mausam ka alag maza hai’, I had so many thoughts as I went inside the Vasota jungle. The jungle looked pretty similar to the Andharban forest, but this forest offered some swings (strong branches hanging out in the shape of a swing).

You need a good pair of shoes to trek in Vasota because, majorly, the patch is rocky, so if you do not have proper shoes, it might hurt your feet. It was quite scenic, and thanks to the good weather that kept us moving through the rocky roads. We came across small water ponds, some steep steps, but no straight road. Vasota jungle is an all steep; it’s just as you have to constantly keep climbing. During the start of the trek, take a wooden stick (many wooden strong sticks lie in the jungle itself) because they can become your major support (trust me on this one) all along your journey. Also, I highly recommend you to carry some Chikkis or Parle-G biscuits as the energy goes down halfway only. My face turned red, I was panting and sweating, but, the show must go on, right!’. Thanks to Namrata and Saumya, we kept talking to distract our minds and to tell them that “All izz well.”

On our way, we came across two paths; one was a long one and the other one was a great shortcut which was 70degree steep! It was scary yet adventurous to climb up on the rocks. It was only one and a half hours since we started trekking but it seemed we were climbing for hours and hours. Compared to my previous treks, I found Vasota trek more difficult. I almost gave up walking when suddenly I heard a small kid (he was in 4th class) hopping by the rocks and asking people to move and let him climb. I was amazed at seeing so many such kids (even smaller ones) who were doing such treks with their parents. That encouraged me to keep moving up till we finally saw a flat surface and I felt like heaven!

We though that was the end of the Vasota trek but no, it was more 15min of climb to finish the trek. There was a huge crowd that day,maybe due to New Year ,because I didn’t see so many enthusiasts in my previous treks. All of us urged Abhishek to sit for some time. ‘Difficult paths often lead you to the beautiul destination’,it was relaxing to sit and feel the breeze over the sweaty face, watch the top view of the vast jungle.

It was 1.00 pm, we felt normal and started to climb the remaining patch. The patch is too narrow for two persons to go at a time, hence slowly, crawling, we reached our destination. All I could see was people and people at every corner!These days people have become very active, when it comes to trekking; even the people in their 50-60s had also climbed up. Our clothes, our hands all were dirty and dusty, hence we washed our hands near a small pond; we searched for a corner to have lunch and ate till our stomach was satisfied. All the waste stuff was packed and carried with us, as committed.

The main attraction of doing the Vasota trek was the view of the beautiful plateau and the jungle. The only disappointment was the number of people; due to so many people around ,it looked more like a picnic spot ,rather than the trek. Abhishek asked everyone to gather so as to take a nice group photo. Again the challenge was to go down because , you need to perfectly balance your body. At such times, I wish, if only I had wings or, maybe a parachute to directly land down!

Coming down was not as difficult as I imagined it to be. Though the mud was slippery, I kept my record of not falling. Let me give you a tip for trekking: avoid sitting or taking rest while descending because, once the body goes to the comfort zone, the legs start to tremble and then it’s difficult to balance. Saumya and Namrata were first-time trekkers, still, they did a great job; in many cases, I felt to give up but Saumya seemed to have eaten spinach (like Popeye cartoon..yeah its a bad joke). Around 5:30 pm, we reached our boat and started our return journey. While returning from Vasota trek, sitting on the boat, we witnessed a beautiful sunset along with the chilled breeze that forced us to wear our sweaters again. After some snacks, we started our return journey to Pune at around 7:00 pm and reached by 11:40 pm.