A Holi in the Holy Land of Lord Krishna 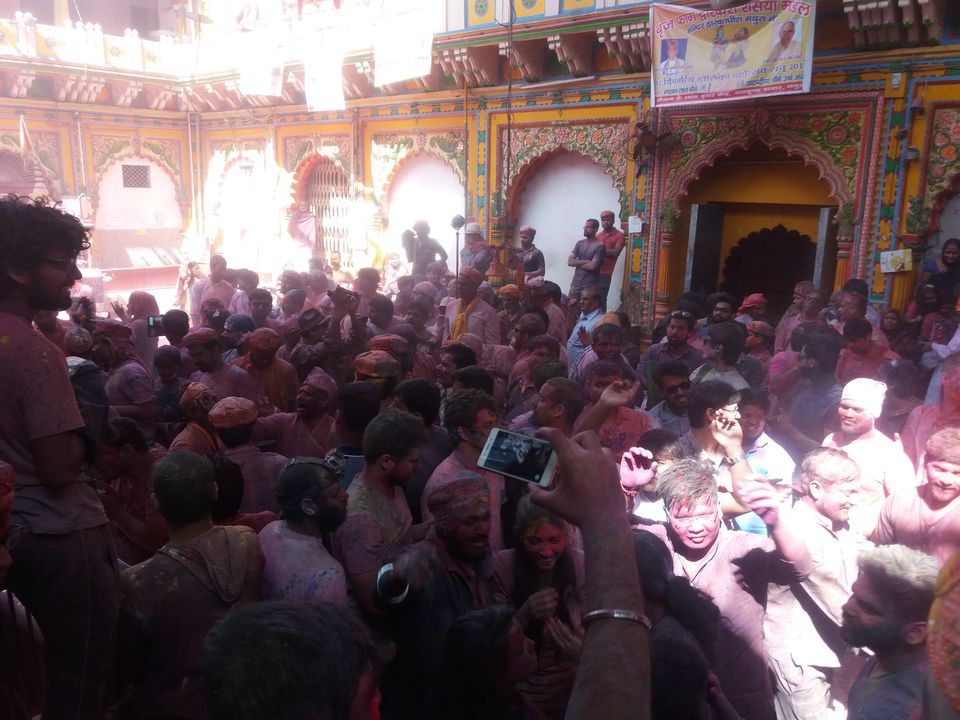 We(Me and my husband) had gone for a Jaipur trip in the long Holi weekend and the festival day fell on the returning day. We had not planned anything even the night before departing. On the breakfast table suddenly this idea came to our mind and we decided to take the other route(Jaipur>Dausa>Bharatpur>Mathura>Noida) instead of the conventional route.

We started from Jaipur at 8AM and reached Mathura by 11.30AM.

Immediate plan after reaching was to have lunch and then proceed with the next agenda. But to our great despair(surprise),not a single shop was open.Hence, we had to overcome the hunger by resorting on some cakes and chips from a small departmental store which was solely left open in the entire area.

Being in the place from where the festival originated on the day of Holi is like tasting the essence of the festival in its purest form, though due to the lack of proper planning we missed some part of it.

With sticks, shields, colors, canons of water and foam paint(a new fad), the Holi celebration here is a must-have experience.

We wanted to see the celebration at Krishna Janmabhumi Temple but by the time we reached there, the temple was closed. So, we decided to head towards Vishram Ghat.

The alley that leads to the ghat is very narrow and it was really difficult to go by car. Leaving your car on the main road before the narrow alley starts and walking to the ghat is highly suggested.

As the name suggests, this is the place where Lord Krishna took rest after killing the Kansh, the tyrant ruler of the Vrishni kingdom.The ghat by the river Yamuna, which is considered as the most sacred of all, is surrounded by many small temples. Gokul, the place where Lord krishna grew up is on the other side of the river. Every evening a grand aarti is performed at Vishram Ghat presenting an eye catching view with numerous lit oil lamps floating on the waters of Yamuna.

A boatman(who helped us in the car parking) requested us to go for a boat ride. As we got into the boat, a priest also accompanied us even without our notice and we couldn't help but accept that though we never had any intention of offering puja in the temple.

The priest showed us the house Kansh's house and shared with us the common rendition of Krishna's birth story.

The boat ride was a short and simple one. The boatman charged us 600/- which we found quite high and illogical. The priest didnt demand anything on his own but we had to pay some 300/- for the puja(And even then he was grumbling).

After the boat ride we headed out for the temple visit.

On the big day of Holi, the biggest festival takes place at the historical Dwarkadheesh Temple in Mathura. The gates of the temple open at 10am and there is already a big crowd outside the gates by then playing Holi and colouring anyone who dares cross the road.

On entering the temple we felt like some Desi Rave party or DJ is going on. Devotees comprising foreign tourists, locals and youngsters dancing madly to the tune of Dhols played by some priests. Drumming was also going on in full swing.The priests were spraying colors which kept on changing from time to time.Not a single face can be spotted without color.

On our way back, streets were nearly empty as most of the peoples had gone home after the celebration.The streets were full of colors and even our car was not spared. By the time we went outside Mathura it was adorned with multiple colors and water baloon marks.

Arrive a day/night before Holi .On the day of Holi,head out to Vishram ghat at 7AM and catch the process of making Bhang by the priests. If possible, maybe take a glass yourself as well (not more).

Then head to Dwarkadheesh Temple to experience a Holi celebrated in a wild yet colorful and sane revelry.

Dont forget to buy some food in advance and keep safely with you in the bag or back in the hotel room. In case you forget to buy food, there is one dhaba open opposite Holi gate which does serve some very oily food. There could be some street vendors who sell stale chole-kulche, and maybe a fruit-seller if you are lucky. Brijwasi sweets at Holi gate opens around 4pm and you can get something hygienic to eat there.

Get ready with caps/head gears, your holi special clothes,shades, water proof camera and phone covers and a dry bag to keep your money and other essentials and plunge into the colors.