The annual World Sacred Spirit Festival brings some of the best talent in classical and folk music while keeping a Sufi flavor. Harsimran Shergill finds out what has been bringing people here for ten years.

When Maharaja Sardar Singh of Jodhpur built the Jaswant Thada in 1899, he could not have imagined the transformation it would go through a century later. At a short distance from the Mehrangarh Fort, the historical landmark has welcomed musicians from around the world to participate in its Sufiana music revelry for ten years. 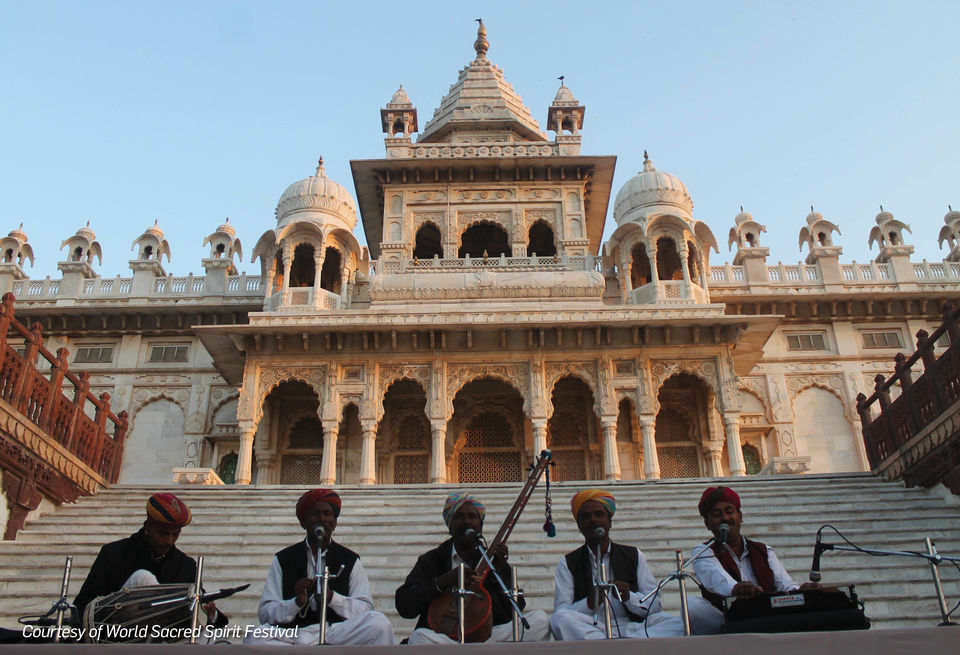 This February marked a milestone anniversary for the World Sacred Spirit Festival (earlier known as World Sufi Festival) and Jodhpur assumed frivolous colours to celebrate this occasion. The sunset draped the blue city in shades of pink and yellow as Ustad Irshad Khan, the majesty of sitar and surbahar, sat affront the calm Devkund Lake and sang of love, loss, and longing. Above him, flocks of homebound birds dramatically flitted past at regular intervals in approval of every word he sang. 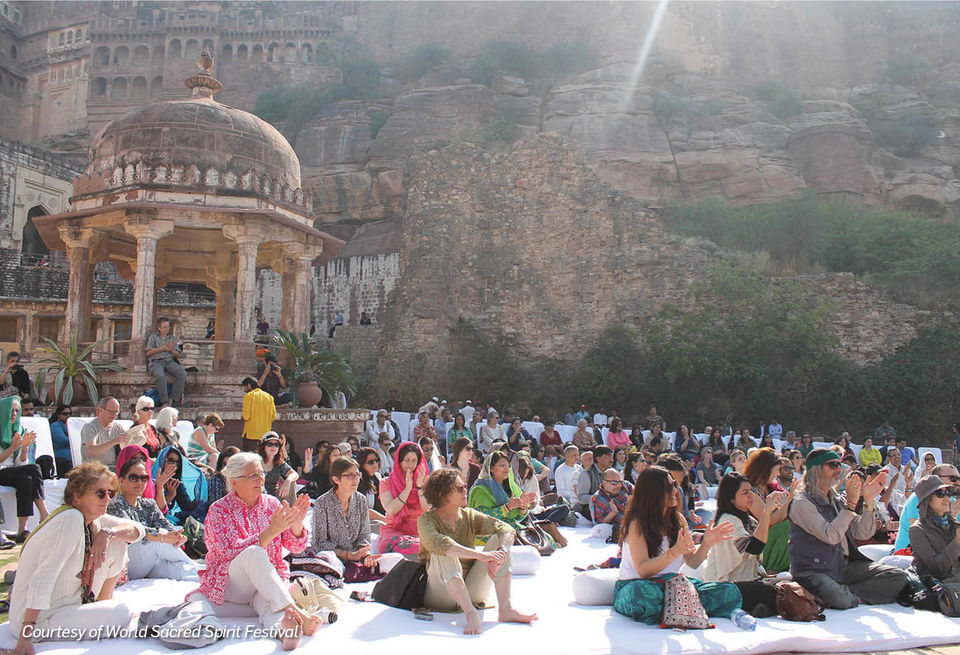 I pinched myself twice, thinking this cannot be real—but this is exactly true for experiences that touch so deep—a camera or words cannot do justice in their replication. This was one of the many moments that has made the World Sacred Spirit Festival a sought-after festivals in India. While I waited for the first experience to sink in, Madan Gopal Singh & Char Yaar accompanied by the Manganiyars tuned their instruments for the next performance. Quoting sonnets from Kabir to Bulleh Shah, Madan Gopal, a regular performer at the festival, illustrated his flair for amplifying each verse with his quick wit. 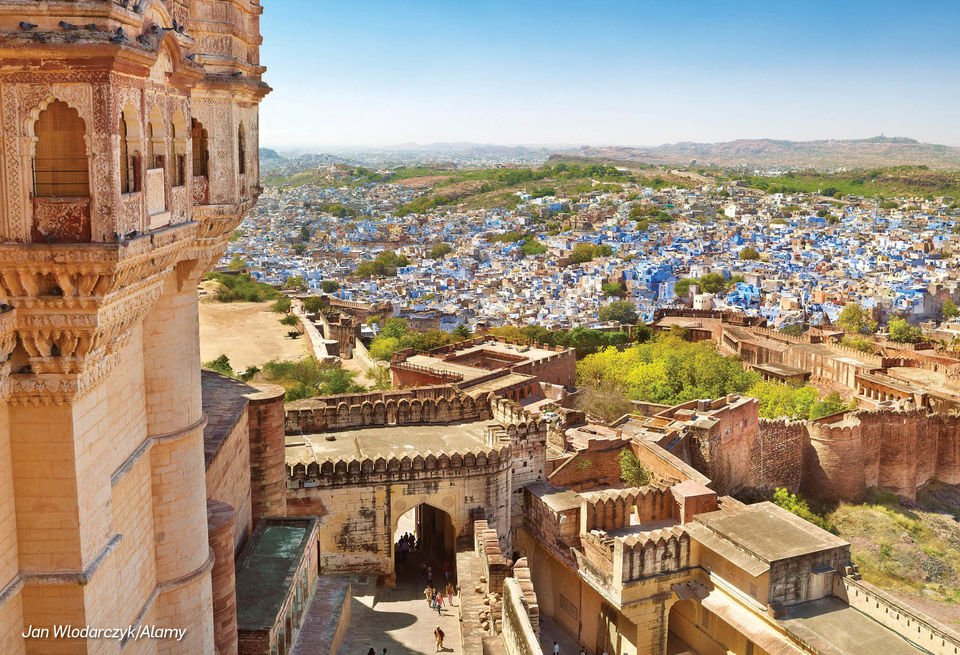 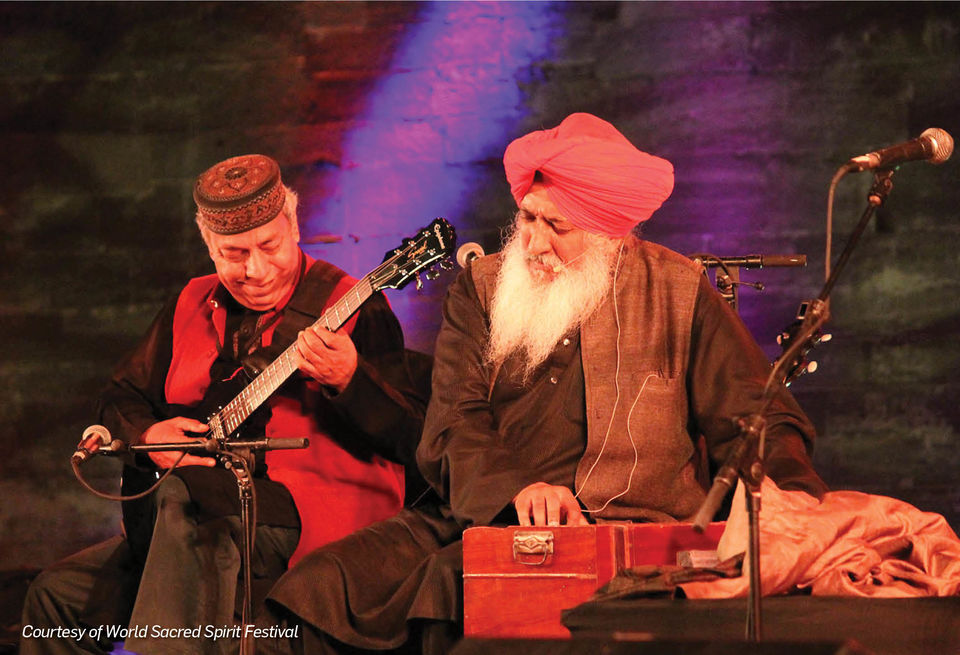 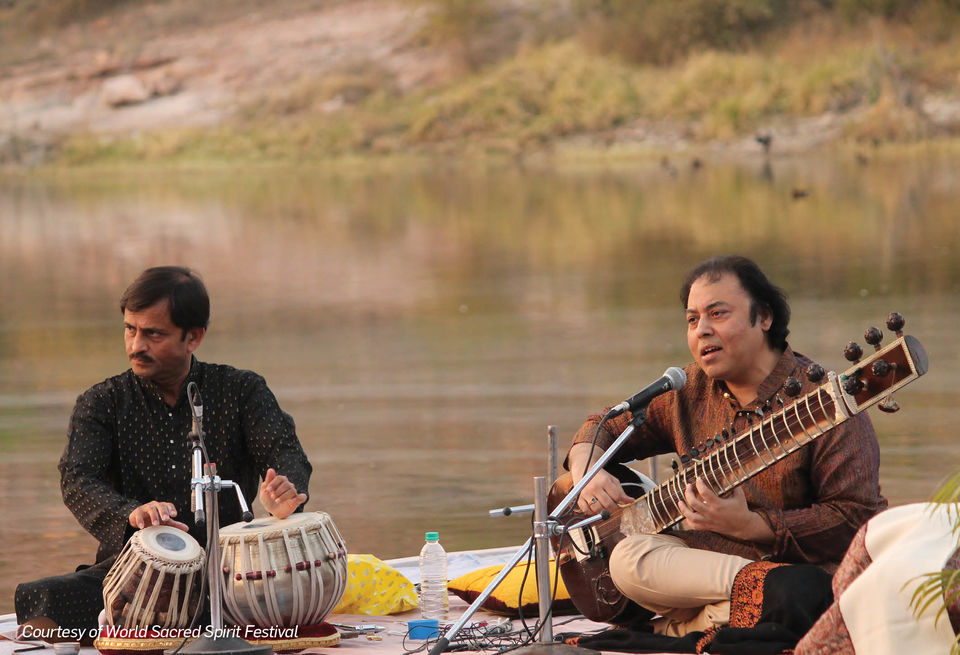 The Manganiyars, who are traditional folk singers of Rajasthan, joined the Char Yaar in songs of Heer and Ranja, Mast Qalandar (an annual favourite), and a jugalbandi, pulling the crowd from their seats to their feet. The camaraderie between the two groups as of others was evident throughout the festival. Be it a collaboration between Mongolian performer Epi and the Marwar Ensemble, spectacular performances by classical artists like Sahar and Milad Mohammadi, Mehdi Teimouriney, Hossein. 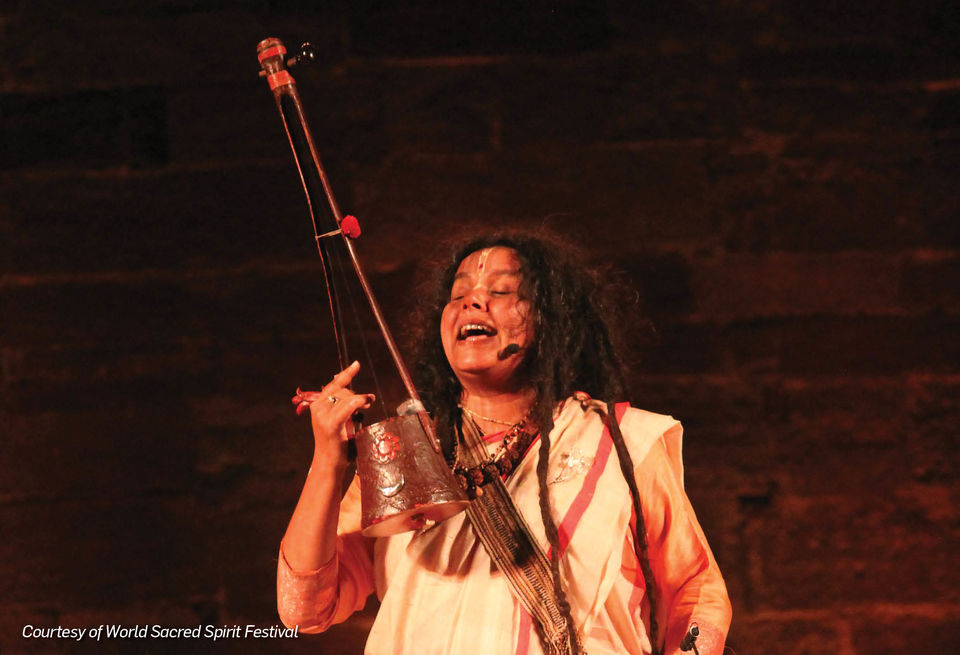 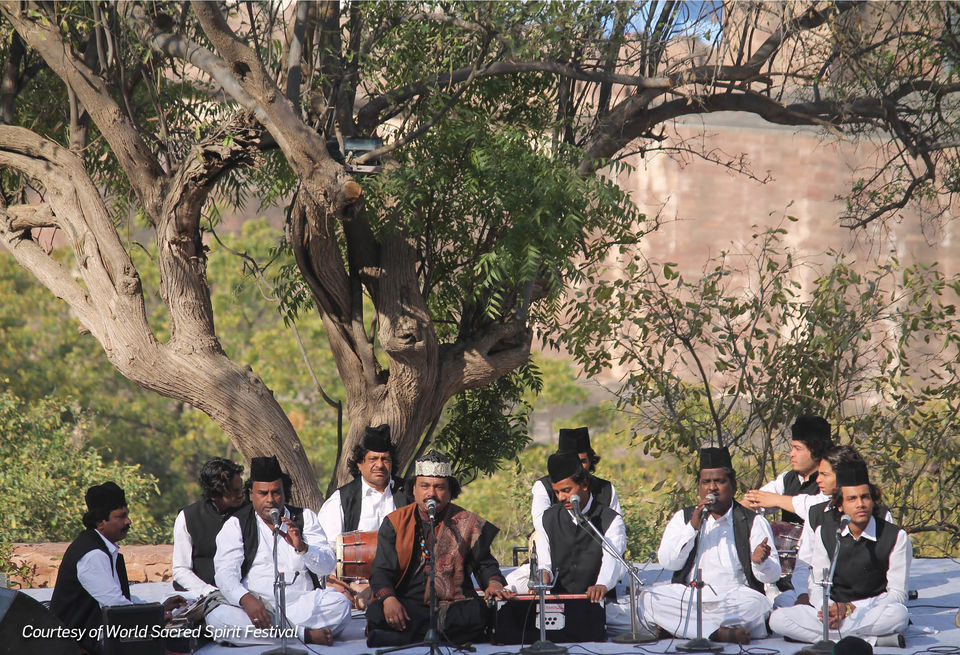 Rezaeeniadaf from Iran, or Lingling Yu's effortless mastery over the Pipa, a Chinese lute. Shruti Mishra, a festival-goer who had travelled from Pune with her husband and their three-year old daughter, explained it quite accurately, “It is perhaps the only festival we’ve been to, where so many people from different cultures unite for one cause. It’s a celebration of the Sufi spirit.” The glorious musical journey lingered on and over-flowed onto my whereabouts in the city. Standing tall at Rao Jodha Park is the Singhoria Pol which served as the gateway to the city of Jodhpur in the 17th century; now it provides a meeting spot for nature lovers to embark on nature walks with writer, film maker and naturalist, Pradip Krishen. 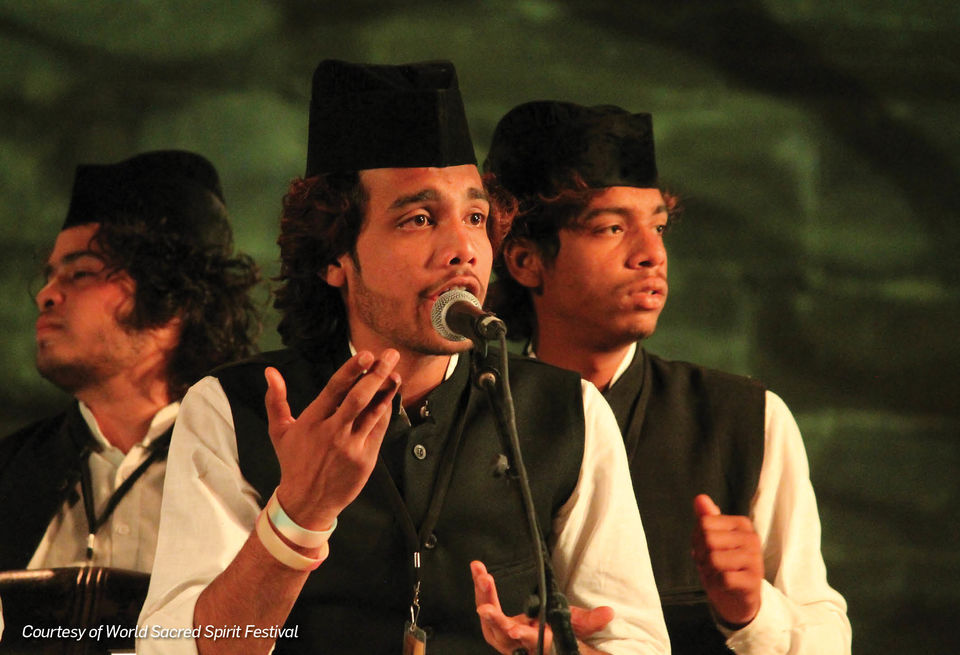 His passion for indigenous plants and rocks is evident in the magic he gently weaves in describing every plant by its biological name, flowering season, and a story. It took several years of trial and error, he says, to find out which plants are indigenous to the area because they had “only one painting as reference.” He has strived since to bring as many varieties of desert plants to the park as possible. A trail through the Gully—the park’s earliest trail—leads visitors through a narrow, hand hewn canyon of rock that opens out to reveal the fort and the gorgeous Blue City from a vantage point. Ranisar, the western range of the park is criss-crossed with several walking trails, one of which leads to an artificial lake. As I sat in the open-air restaurant that overlooks the Meherangarh Fort, I was already making plans to come back next year. 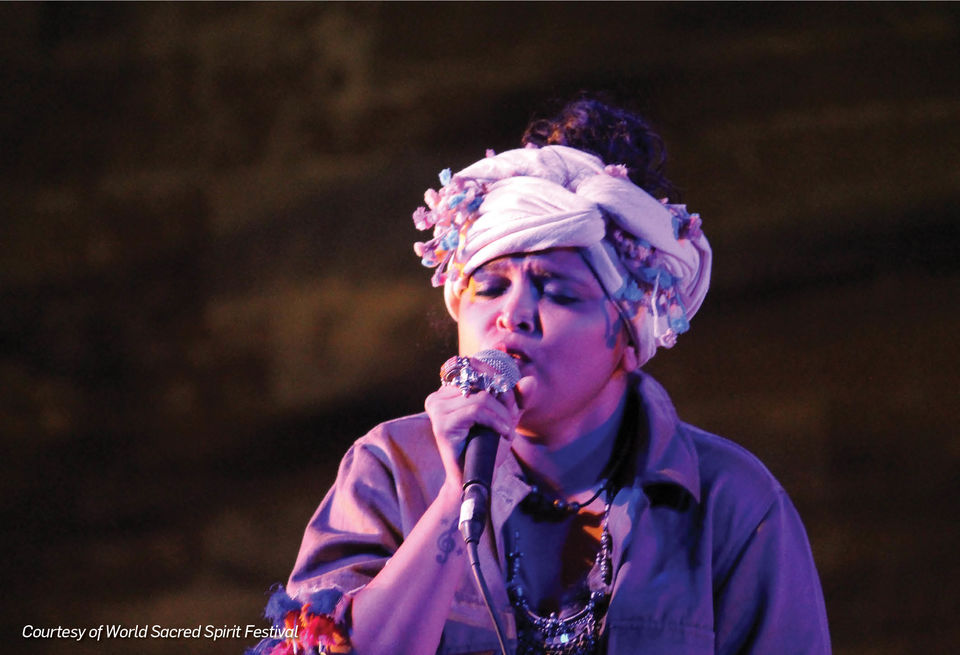 An excerpt from our conversation with His Highness Maharaja Gaj Singh II of Jodhpur.

It was a lovely city; quiet, peaceful and without tourism. In those days, people pursued the Golden Triangle of Jaipur, Agra, and Delhi; 'Jaipur' being 'Rajasthan'. When I came back in 1970 after attending university in England, I thought I’d try and make some changes and put Jodhpur on the map. It started with the opening of the Umaid Bhawan Palace as a hotel and also a museum at Mehrangarh Fort.

How did you veer towards classical and Sufi music?

I like to experiment with all genres of music but I’m particularly fond of Indian classical and jazz. There was a time when Indian classical music didn’t mean much to me. It was when I attended a concert featuring Ali Akbar Khan, Pandit Ravi Shankar, Ustad Allah Rakha, and Zakir Hussain in Kolkata that it all came together for me. I was in my teens.

How did the idea of a Sufi music festival come about?

We had undertaken the restoration of the Ahhichatragarh Fort in Naguar with the Helen Hamlyn Trust a long time back. As we neared completion, I wished the world would see it. That’s when we came up with the idea of a music festival at the fort. We took to Sufi because the disciple of Ahmed Chishti went to Nagaur, eventually making it the second seat of Sufi after Ajmer. It was a natural connection.

How do you think the festival has evolved over the years?

After ten years, we have now reached a stage of smooth sailing, though we continue to struggle with sponsors. We’ve got regular visitors and an increase in international tourists who are knowledgeable about this genre. The festival creates a wonderful setting for people to mingle and learn new things.